But Don’t Try to Keep Me in Tonight, Because I’m Big Enough to Break Down the Door. 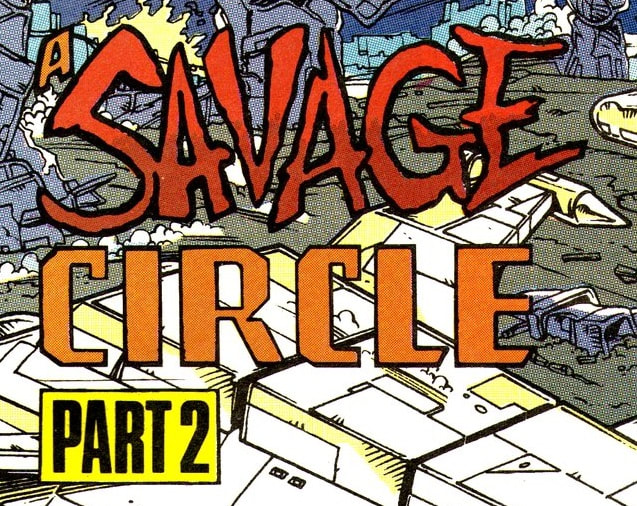 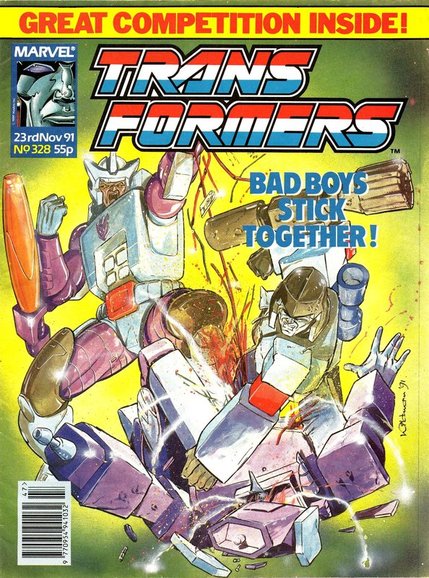 
Before we delve into the contents this week, a couple of commercial breaks, one entirely self-centred and one for charity.

This first is that I now I have a ko-fi page. I know the service is technically to allow creative types to buy themselves a coffee, but I’ll be putting any donations towards helping to pay Andrew Turnbull and Stuart Denyer what they should be getting for their work on the book 3 rather than mates rates. It’s an experimental dipping of the toe into the world of fundraisers that may lead to a Kickstarter full of bonuses for the final volume as well. Anything given is gratefully received but never expected.

The more worthy cause comes from TFNation. My podcasting pal Marian Hilditch did some amazing greeting cards of her toy photography to sell on behalf of the York charity IDAS, a domestic abuse charity that runs the only refuge in the York area. I bought two sets, one for myself, and one to get signed by some of the guests. Specifically James Roberts, Jack Lawrence, Nick Roche and Stan Bush. Which am I now going to do a blind auction for in order to raise more money for the charity.


So, starting at £10 (I think it’s only fair it raises at least twice what it originally cost), decide what you’d be willing to pay and either DM me on Twitter (@InflatableDalek) or email me at crazewebb@yahoo.co.uk before 31st August. Whoever offers the highest, gets the set. You can enter from anywhere in the world and I’ll cover the postage, and every penny will go to the charity. Only other conditions are that payment is made by the seventh of September and that it be made by PayPal. You can see the cards in all their glory at the bottom of this piece. And good luck! 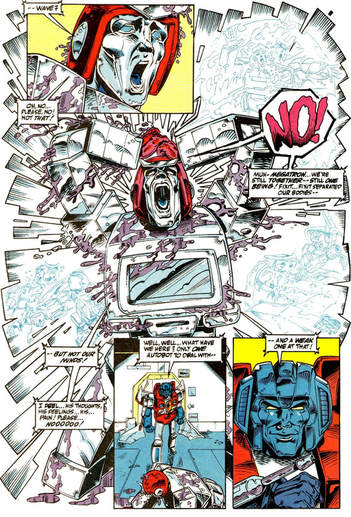 To tricky for me to edit around the image... but what a page!
Good luck is also in hand back in 1991. Where behind a rather violent (Shockwave seems to be gushing blood) Wham! quoting cover, an incredibly smug hand on hips Grimlock reveals he has three Decepticon ships that have somehow managed to sneak up on Prowl and Blaster undetected. The glint on his eyes as he tells them to shut up and get on board is especially brilliant for radiating how much he’s in love with himself at this point.

Which is more than Galvatron can manage as he continues to rant about how much he has to kill Megatron. The split both across scenes and issues creates the unintended and hilarious impression he’s been shouting for two weeks and two days non-stop.

Though that extra time does mean he has chance to get his head straight as it suddenly hits him he’s about to commit a very elaborate suicide. This may not technically be his past self, but he can’t be sure of the temporal ripples and the more sensible thing to do is keep Megatron alive against whoever is at the door.

After all these years of seeing Galvatron effectively be his own worst enemy, this moment of rationality is the equivalent of Megatron’s in Fall and Rise of the Decepticon Empire, and suggests there might have been a similar whole new direction for the character if the series had continued.

Falling into old patterns is exactly what Starscream is doing as he enters the room with Shockwave to see only Megatron... and immediately starts grovelling and saying how much he’s looking forward to being led again. Which dismays Shockwave, to the point he shows actual irritation as he orders Starscream to take care of any Autobots whilst he finishes the “Redundant fool”. 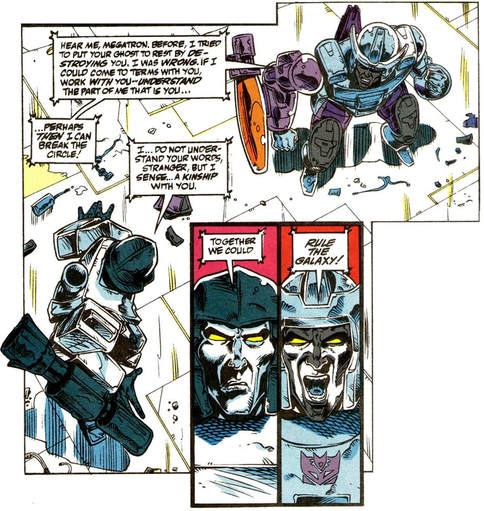 "So we break the cycle of hate by... doing twice as much hate!"
Seeing Shockwave as well is what makes Ratchet twig that he and Megatron are still joined at the mind, and we get a fantastic near full page spread of him on his knees screaming “NO!” as he remembers every indignity Furman has thrust upon him in the US book and how he now has to deal with the memories and pains of a maniac. It’s little wonder Starscream finds him weeping on the ground, and assumes easy pray.

The next two pages are merely plot progression. The first has Grimlock explaining he stole and hid the ships years ago and also has a way of tracking the Decepticons despite their head start. Though this is enlivened by Prowl being so happy he actually admires Grimlock’s rebellious streak and misses being insulted (“Think [Prime] a bit soft in the head. You a lot like him actually”).

The second is HiQ breathlessly explaining the pain Prime had been feeling wasn’t something going wrong, but something going very right. The ultimate end game of the Powermaster process was to merge the organic and mechanical beings into one whole. But with the bigger boy now dead, Optimus Prime is stuck in tiny HiQ. Oh, and they need to find a Last Autobot who can sort everything out, but that Prime has never bothered to look for before.

Blackrock has no truck with this until Thunderpunch goads him by reminding they won the Unicron was by themselves (no you didn’t), meaning we have more exciting Neo Knight adventures to come.

The following climax to the issue is stunning though. Both Shockwave (“You should have stayed dead”) and Starscream think they’ve won their fights easily. Until Shockwave makes the mistake of bemoaning that it isn’t any fun...

And Ratchet snaps. Gloriously. The original whipping boy of the comic delivers a mighty right hook to the Decepticon whilst shouting in pure cathartic rage about the trivialisation of life and death just for Starscream to get his jollies. It may be Wildman’s single best panel in the series and would have had every reader cheering in the aisles. 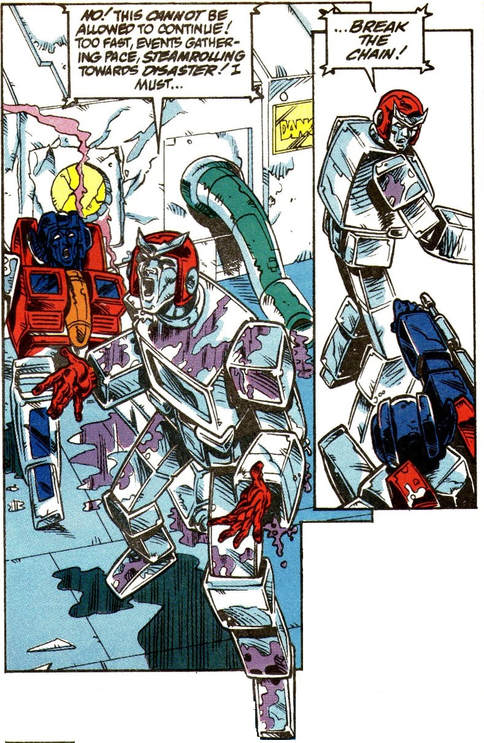 Time Ratchet has spent awake between supreme sacrifices? Ten minutes.
In the other fight, Galvatron (who was hanging from the ceiling or something? There’s poor peripheral vision this issue. Though I guess Shockwave has more of an excuse) politely steps in to smash Shockwave into a wall. He then delivers a speech to Megatron about fighting their demons and working together to understand that flawed part better... to which Megatron’s response is basically and hilariously “No idea mate, but you like violence and I like violence, so lets be violent together!”

What’s easy to overlook here as we won’t get a clear indication of it till the next story, is that Shockwave gets his second messy and nasty death from Furman here as they go to town on him.

Of course, any death might well have been temporary as Furman puts in his very last token set up for new toys as, when Ratchet decides enough is enough and to knock Starscream’s aim into vital equipment, the nucleon tanks are hit and burst. Conveniently gushing the stuff everywhere and making sure the two characters present with Action Master toys could have been reintroduced as such if the book had lasted long enough for Furman to no longer put this off. It was probably the last thing written before the axe definitely fell.

The blast also wrecks the Ark, with Ratchet pointing out things have come full circle: As Optimus Prime pressed that fateful button four million years ago to stop the Decepticon menace, now he has done the same.

Though it may not be enough as we end of Klo, the “Planet of enduring peace”, where “enduring” is now measured in hours...

This is an issue of big lasts. It’s farewell to Ratchet, Starscream, a spacefaring Ark and perhaps most surprisingly of all, Megatron. Who has come back this close to the end, but fails to make it to the finale. And it’s a great exit for all of them, a strong dramatic and action packed issue that caps the seven year history between these characters, especially Ratchet and Megs, in the best way possible. Everything here is very special indeed.

Except the Neo Knights.

This will go well.
Transformation is very excited about Paul Neary’s big, and ultimately company destroying, push to re-launch Marvel UK with Genesis ’92. A bunch of exciting new titles like Warheads, Hell’s Angels and Motormouth will be joining old friends like, erm, Death’s Head. At this point I would assume Marvel were trying to keep the “Death” and rebirth of the character a surprise, if not for them already having used promo art of Death’s Head II in this very sidebar previously. It feels like someone, deep down inside, knows this is going to go badly in the end.

AtoZ covers Repugnus, and like his teammate it forgets his appearance in Headmasters to present him as a whole new character.

Blaster is Dreadwind level unhelpful this week. Tom Wojeiechoeski asks two questions about how Duocons work that get shrugged off with a “I don’t do tech stuff”. Then Peter Bond from Swansea, after making more Transformers: The Movie 2 casting suggestions (Timothy Dalton as Tracks!), asks about how characters shown to be dead in Dark Awakening can now be in the comic, and about the visual discontinuity between the end of that episode and The Return of Optimus Prime.


Now, traditionally the comic would just pass off the former by saying the cartoon was fiction and the later by saying it was fiction full of errors. But here Blaster simply tells the kid off for not having read the Nucleon storyline (even though it has no connection to Dark Awakening) and claims he wasn’t there so he can’t explain anything about The Return of Optimus Prime.

Gary Slatcher of Fareham at least does slightly better in getting a response to their heartfelt plea about the end of the comic and toyline. Though Blaster’s reassurance is to say Gary is getting ahead of himself to think the comic is doomed. So I suppose that is an inaccurate as the other responses. 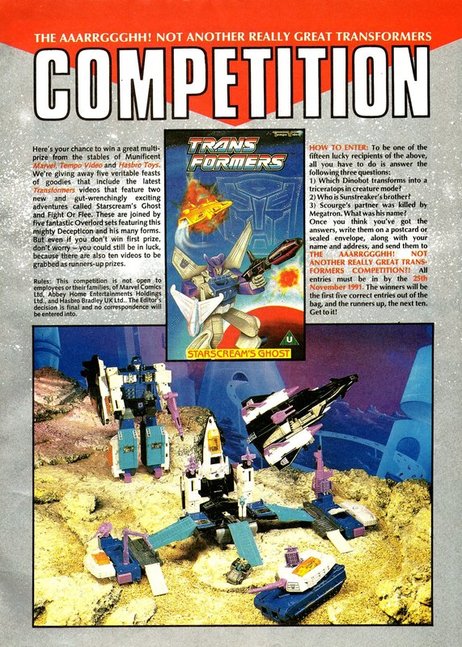 It's Overlord...finished!
The AAARRGGGHH! Not Another Really Great Transformers Competition offers readers the chance to win a video of Starscream’s Ghost and Fight or Flee, but far more excitingly an Overlord is up for offer as well. If the winner has kept that, even as a loose mess, they’ll be sitting on a gold mine by now. Which means the questions are a little trickier than usual, requiring you to remember who died in Dry Run! and the existence of Sideswipe. Still, it’s not a bad final ever competition.

Combat Colin gives us one of the best and most subtle gags the series has ever done, as Steve assures Commander Zodiac of the moonbase that they’re used to having daft adventures. Which gives us a * leading to a See Issue box reading “See Action Force Nos 5-50 and Transformers Nos 153-328”.

Things get more serious though on the Dark Side of the Moon as Megabrain finds an energy filled alien gravestone (very 2001) that has killed the previous astronauts that came looking, but which he now plans to absorb for himself!

We close out on a second Annual adverts, this one for the licensed properties like Beetlejuice, Barbie, New Kids on the Block and, for the final time, Transformers.

Next week, and don’t forget to bid on the cards below in the meantime, Spike Witwicky returns! 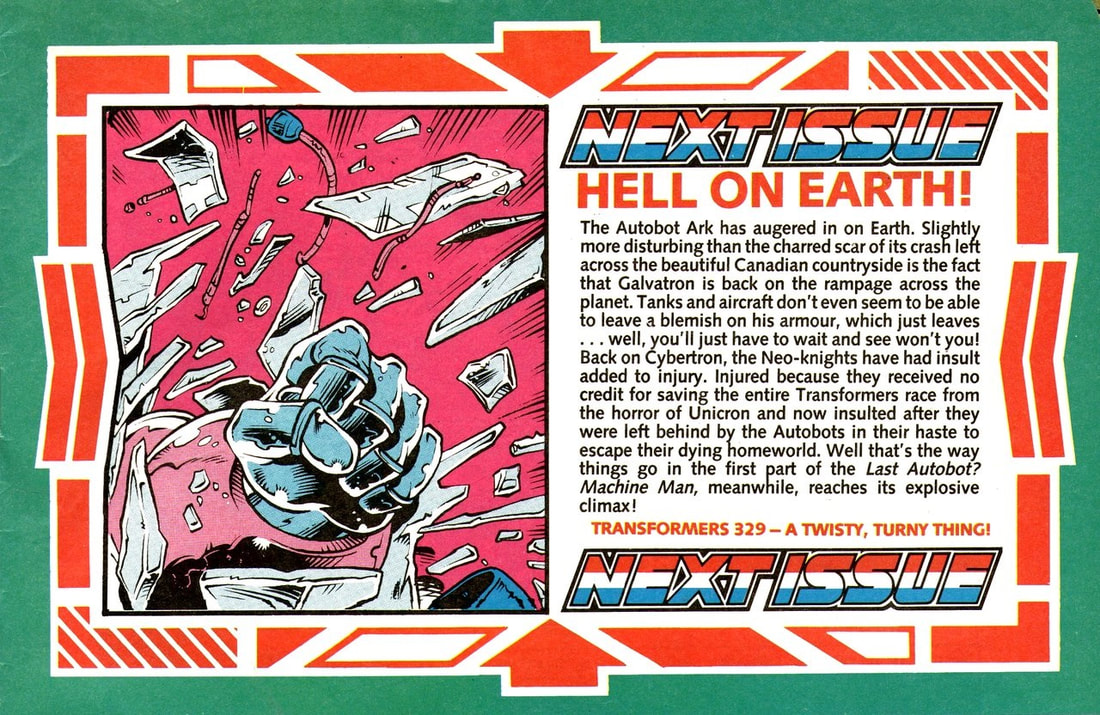 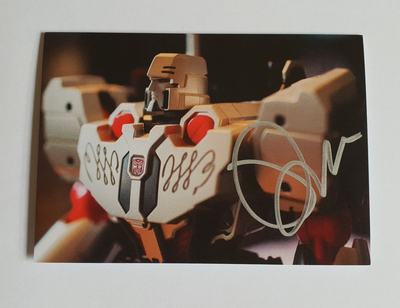 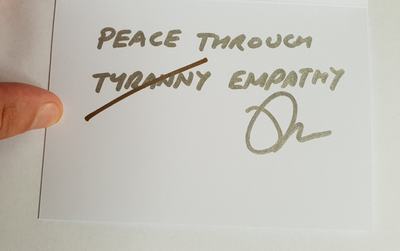 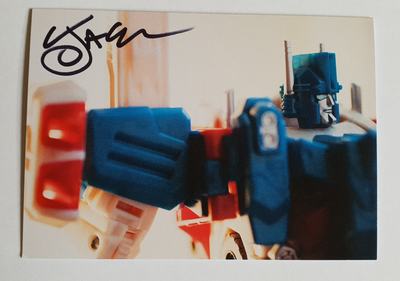 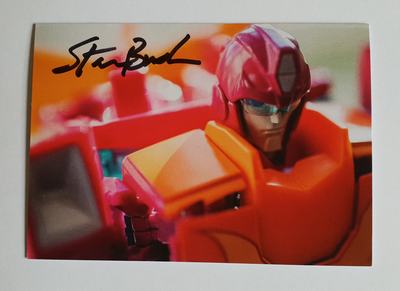 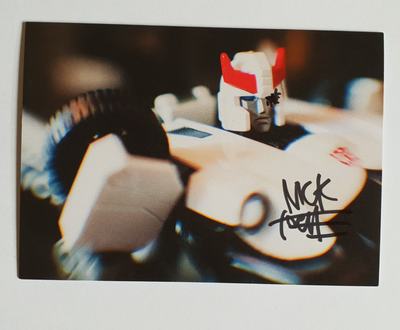 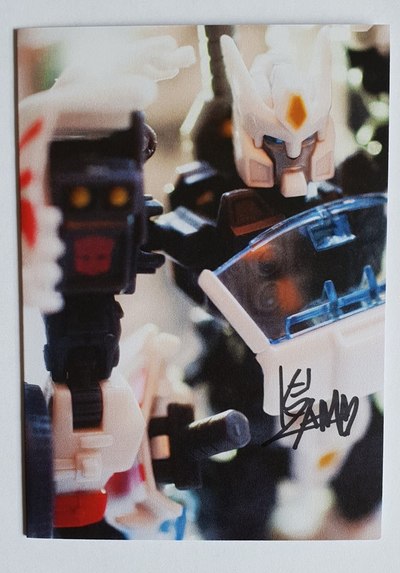