Me and My Shadow. 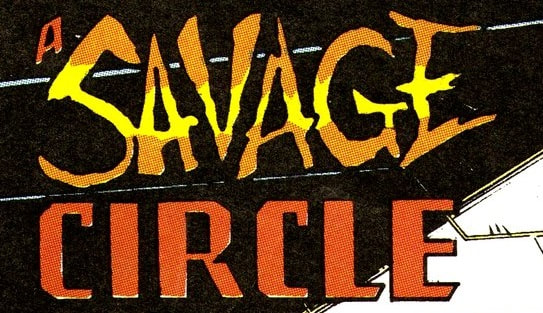 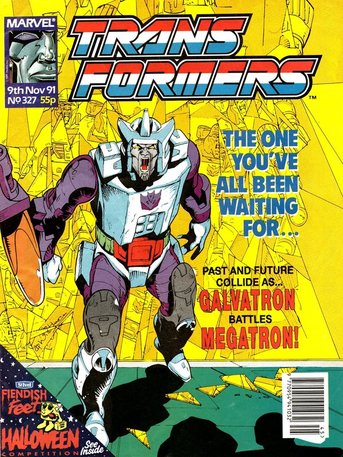 
You know Shockwave, for all that massive intellect of yours, you really are pretty dumb sometimes!


So as I said last time, we really are into the final phase of the book now as it becomes mostly concerned with tying up old plots rather than starting new ones. That’s not entirely by design—I believe the axe formally came down during the writing of the next story—but it’s clear Furman is now aware just how much the book is on borrowed time and it’s better to try and wrap up as much outstanding business as he can.

With every plot he successfully closes making ReGeneration One that little bit more pointless.

Of course, what the cover promises us, a Megatron/Galvatron smack down, isn’t really a lose end. Galvatron’s last scene in On the Edge of Extinction! would have been a perfectly fine exit for the character. But it does give Megatron himself some nice and important material to work with.

Furman actually decides (and I must admit I’d forgotten he’s done this) to recycle a key idea from his aborted attempt to follow up on Time Wars. That Megatron is forever caught in a cycle of self-destruction he must break out of if he’s ever going to be an effective leader. The twist here though being that this is expressed from Galvatron’s point of view. 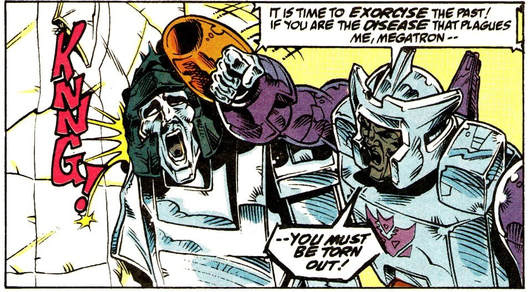 I don't think that's recognised therapy.
So we open with a very nicely drawn (especially the splash page of the damaged Megatron floating through space) flashback to Galvatron’s creation in 2005, the year it always was shh.

In his narration we see he thinks of Megatron as a flawed, diseased mind with madness constantly gnawing at it. That coming death was welcome, and Unicron’s attempt to create a flawless soldier was undone by the same madness setting him on the wrong path once again.

Which seems a little harsh to be honest, outside of his first appearance this Galvatron has been on the smarter and more thoughtful end of the spectrum for the character, and even when he was full loon in Rhythms, he had still successfully conquered a planet and was only undone by events beyond his control.

Still, we’re all our own worst critic, and his reaction to having run into his parallel former self is to punch him and throw him into a wall, declaring the only way to be cleansed of his own madness is to remove the source and kill Megatron.

So we’re definitely more towards the crazier end of the Galvatron-ometer.

Megatron himself isn’t having too good a time of it, being wrecked by memories of the accident and its aftermath, and so is convinced the person attacking him is Ratchet (with a great tier panel showing the real Galvatron and the imagined Ratchet in the same poses), meaning he’s now also well up for a fight, making both explode in raw anger.

On the bridge we get a fun scene of Starscream and Shockwave detecting the disturbance going on down below and Starscream sarcastically pointing out that was the room full of dead Autobots like the ones they just saw alive and fighting in the battle and hey, maybe they should go check it out a bit more thoroughly before they’re up to their knees in revived enemies.

The eyes have it.
The next two pages are really just a bit of housekeeping, though with a nice transition in the middle by Cybertron being shown in Bludgeon’s eye.

The first sees the Decepticons pick their first target for the new campaign by having Stranglehold stick Bludgeon’s sword in a map.

Wait... Stranglehold... acting like Bludgeon’s best mate again? Where’s my boy Krok? Is he planning something mysterious and dangerous?

Either way, the sword hits Klo, a very nice resources filled planet that Bludgeon is very pleased to go plunder, whilst having a good laugh at the fool Autobots waiting to die with Cybertron.

On the planet, Prowl is on the edge of a complete breakdown, cheerfully standing out in the destructive storm because, hey, what’s the point in going inside? He even starts laughing hysterically at Blaster. Though once calmed, the two of them start discussing what happened to the mysteriously absent Grimlock, before they see something above that startles them.

The annoying thing is that Prowl becomes the latest convert to the idea that the Decepticon/Autobot difference is genetic.

Back at the plot, as Earth looms large before the Ark, Ratchet pops out of a tube as well.

The eyes have... oh wait, done that one.
Which is where you have to worry as he and Galvatron are the only guys aboard without an Action Master toy (I’m sure by amazing coincidence any others aboard would have been in the toy range), giving him a very big target on his back.

There are also some pretty serious concerns for Ratchet as it turns out (and there’s another excellent use of parallel panels here) still mentally joined with Megatron, though neither quite realises it here.

Meaning we get a visual gag of Ratchet being punched by no one (something Red Dwarf would really drag out eight years later) and Megatron giving up the fight in confusion. Giving us a great cliff-hanger of Galvatron grabbing himself by the neck and preparing to fire whilst screaming “NOW IT ENDS!”

Or at least it would be a great cliff-hanger, if two panels of Grimlock stood atop a ship and asking Prowl and Blaster if they’d thought he’d abandoned them didn’t slip through. But you can’t have everything.

Even if there was no desperate need to bring Galvatron back, he’s the perfect catalyst for a fast, action packed contrast to the last few, more introspective weeks. Wildman and Furman take what is a fairly slight plot and really ram it full of fun and well played moments, making it a real blast. 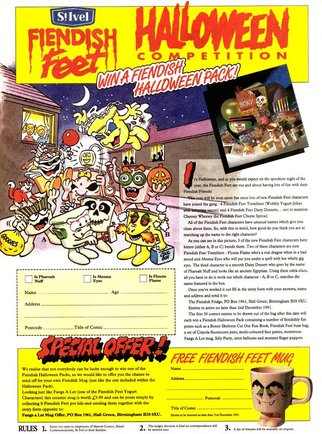 Foot loose.
Transformation gives us some surprising news this issue, buried in a sidebar that’s more about promoting the forthcoming competition for videos and Overlord (the most awesome of Decepticons don’t you know). Issue 328 will be out on the 11th of November... a Monday.

As it’s glossed over, no reason is given and the cover off-sale date of this issue is still the 9th. For it to be something that they’ve been able to give proper notice of (people in the comments have mentioned the occasional Christmas or New Year issue would be delayed by a few days) it’s most likely to be some sort of planned maintenance to the printers or distribution centre causing it. Though they don’t seem to have been able to have the NEXT ISSUE page reaffirm the information, and I suspect with it being dropped in so casually a lot of kids would have missed the importance of this detail.

AtoZ covers Pounce, and oddly doesn’t include not being able to tell Decepticons and their nearby, real nearby, Autobot counterparts are the same person as a weakness.

Darn’N’Blast is especially hard to read this week, though the blue writing over blue “Darn’N’Blast” logos has been making it a struggle for a while. Still, Blaster gives a family of Austin’s (Andrew, Ian and Stuart) from Aylesbury more about Cybertronian football teams where he really goes for the gag, concluding with a description of a key match between Bruticus All-Blacks and Defensor United where Vortex did a hand of God and Bruticus stood on the Micromaster Battle Squad referee team.

Richard Fourke of Aberdeen (who amusingly asks for a specific toy but forgets to include his full address to get it) asks the old question about whether the Seacon is called Overbite or Jawbreaker, with Blaster very firmly saying one is American and one is British. Which is presumably the source of that urban myth as I don’t recall it being said so boldly before.

Mark Hirshfield of Bexleyheath asks another question about an old story (is there no interest in the recent stuff?), about how Galan learnt English. Which I only mention because Blaster makes a Planet of the Apes joke that suggests this was around the time the TV series was repeated on Channel 4. 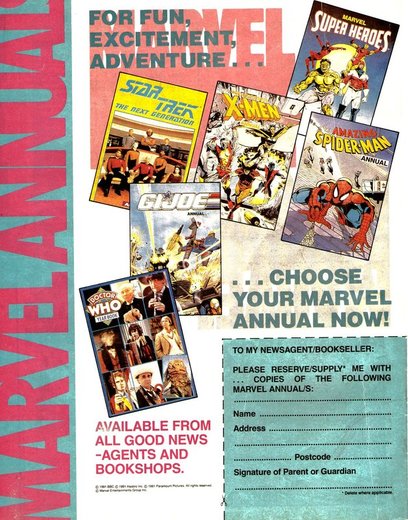 Get your Green Gilberts Annual now.
This issues art, by Alexander Wong of London, is the first in ages not to be based around a pun, instead being of Grimlock. Though in his old body. Wow, people really aren’t interested in the new stuff are they?

They are apparently interested in Fiendish Feet though, as once again Halloween means a competition based around the yogurts. To win a Fiendish Halloween Pack you just have to correct the right name to the right new Fiendish Feet character. Which is easier than it sounds as it’s pretty easy to guess the one with flames coming out her mouth is probably Flossie Flame. You can also send off for a fiendish Feet mug if you collect enough pot lids.

Combat Colin faces The Last “Ooer”! as he’s spent two weeks in his shed, only now coming out (after Spider-Man has popped up from behind a panel to tell you to buy his comic) with a red button for Semi-Automatic Steve to press if anything happens to him. Steve tries to assure Colin by taking him to have his future read by Dr. Peculiar... which only results in the Doctor being knocked out after he only sees doom, death and tragedy.

So there’s nothing for it but to go to the moon on the bus (that bridge really has cut down on journey times), but that just means Megabrain will destroy him there!

The back page is given over to a belated advert for this year’s annuals, including all the aforementioned ones (X-Men, G.I. Joe), plus Star Trek: The Next Generation and, somewhat out of place as having all the Doctors and a Sea Devil on the front clearly pitches it as aimed at older readers, the Doctor Who Yearbook. But perhaps the worrying thing is, the Transformers Annual has been left off...

This weekend is of course TFNation, so if you’re there, do come say hello if you see me. You can call me an idiot for failing to make sure the order for my books arrived in time. Next week back on a Friday, how perfect for me to have arranged a slightly longer than usual gap between two issues with a slightly longer than usual gap between then. This isn’t thrown together you know) it’s the Ark doing her party piece once more. 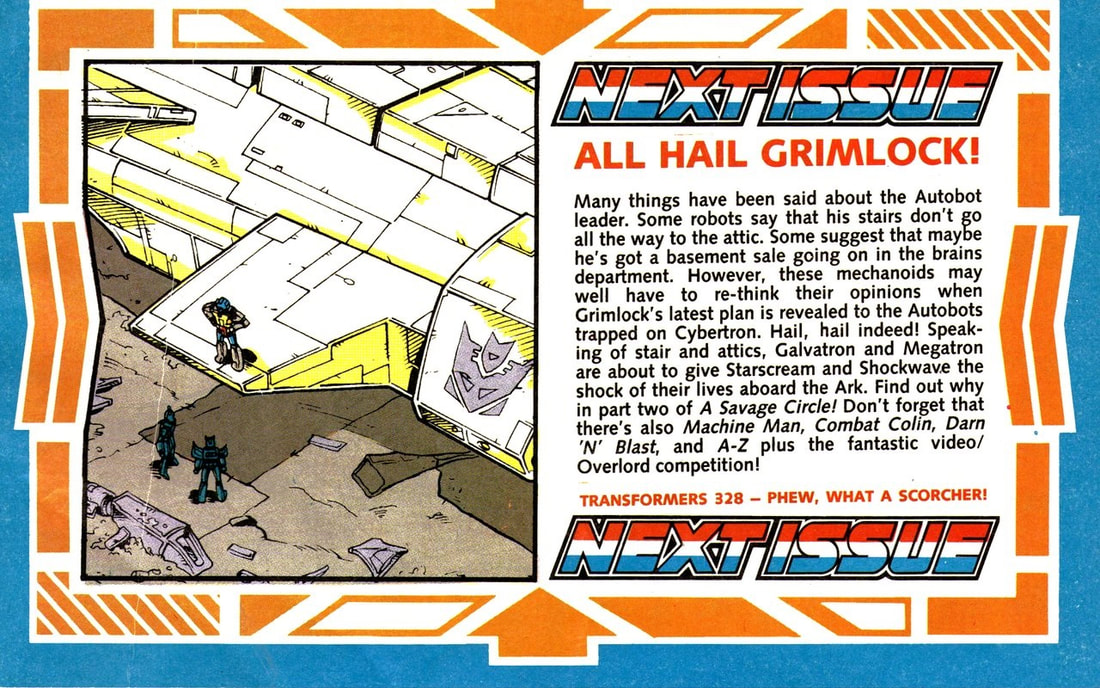