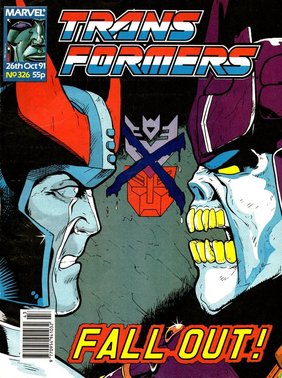 
I’ll just keep quiet in the future, shall I? Follow in your footsteps and marvel at you! Tell me o masterful one, what is your bidding?

A pleasing thing about the cover to this issue of Bludgeon and Prowl facing off (and the inspiration for the song quote above) is me preferring to think using “Fall Out” as the tag-line over a character who is literally dem bones was deliberate.

And if you’ve not seen the last episode of The Prisoner, go do so now. We’ll wait here for you till you’re done.

Before picking up where we left off, we open on a page of Starscream and Shockwave doing a final check of the Ark’s systems before leaving. There’s some lovely writing of Starscream being bored of Shockwave’s efficiency, with amusingly it being him that expresses concern about the Autobot life support bay that old one eye just glosses over. Which turns out to be a bad idea as someone breaks out of cold storage... 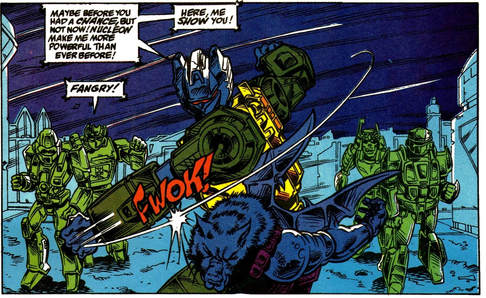 "Really, just buy my toy!"
Back at the fight, we get something of a clue as to why the Action Masters never really took off, as this final push to promote them is based around the idea they’re cooler than Fangry, with Grimlock giving a big speech about how Nucleon makes him way cooler than any mere Headmaster.

The key thing though, is watching the Autobot leader beat the tar out of one of their own quickly turns the mood of the watching Decepticons, much to the pleasure of Bludgeon and the mysterious Krok (who gets to whisper “Blast” this issue, creating a real sense of intrigue over what his secret plots are). So when Prowl steps in and gives the Dinobot a dressing down for forgetting they’re all one race now, Bludgeon demands to know the actual plan before they leave the planet.

Prowl makes a rather weak excuse as to why he hasn’t fully briefed everyone already, but it’s clear he already knows deep down inside that this will be what wrecks the alliance. 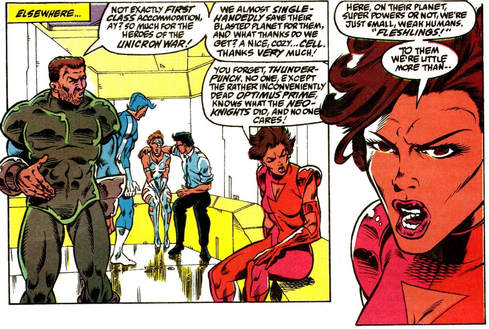 Bitter, much?
But we don’t hear that plan right now as we have to catch up on the Neo Knights. Who are being kept in a box as spare luggage and hauled around by Decepticons who don’t give a toss about them. And just in case you’re wondering if the behind the scenes efforts to give them their own series is already stalling (though we’ll talk about the real big push on them in a few issues time) and Furman is venting through the comic, Rapture gives a big speech about how no one cares about them.

The key thing here is Circuit Breaker is now totally comatose from her pointless thirty second distraction, and Hi-Q is in the box with them, raving about how they have to find the Last Autobot and still thinking he’s Optimus Prime.

It then turns out the Autobots have been very foolish, letting the three Decepticon ships leave first, with Grimlock having no time for Prowl’s concerns a mistake has been made as he instead checks with Snarl that something he’s arranged is in motion. 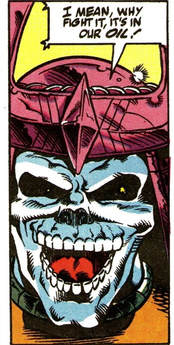 He's so happy.
On the Decepticon flagship, Bludgeon is much more cheerful as he says “Sod it” to Prowl’s plan of colonising an uninhabited planet, effectively agreeing with Grimlock’s stance that being evil is in their blood, so why fight it? Which leads to cheering from the troops (and a polite clap Crankcase) as he asks if anyone minds having left the Autobots to die?

Yes, the Decepticons managed to sneak aboard the three Autobot ships (and six vessels for the whole population? The Cybertronians really have taken a pounding) and sabotage them beyond repair, without anyone noticing until the ‘Cons have already left. I think this is where Kup gets sacked as security chief. No wonder Prowl looks completely lost at the end there.

The Ark on the other hand, is still flying and leaves the planet, with Galvatron revealed as the mysterious watcher and now stowaway. No one expected that. He’s very cheerful in his plan to kill them and take over Earth himself, but has counted without someone stumbling down the corridor towards him... Megatron! With the full page “...But I’m Megatron!” spread being a glorious thing, looking like the Transformers equivalent of that Spider-Man seeing Spider-Man meme. 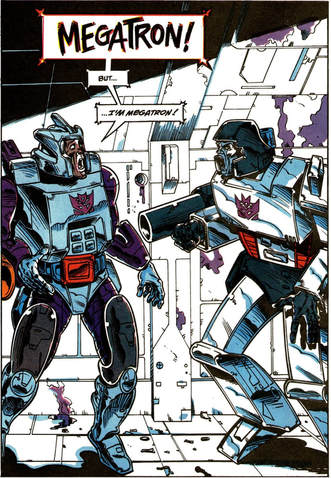 The money shot.
Despite being a bit fragmented, this is again a solid low key issue, that successfully gets everything into place for what will be the final thrust of the book. It’s also really the last forward looking issue with a sense that it’s creating new plot-lines for the series. The remaining three stories will be largely concerned with wrapping up old business.

Transformation describes Bludgeon as the “Decepticon Emperor”, a typical title for their leader in Japan (with “...of Destruction” on the end), but the first time it’s been used in the West. It seems someone at Marvel UK still has shares in Fiendish Feet, as the sidebar is entirely about the competition next issue and how amazing all the new yoghurt pots are.

AtoZ covers Skullcruncher, which reminds me of the time editor on the book version of this project Stuart Denyer asked Budiansky what inspired him to created a cannibalistic nutter, only to be met with a blank stare.

Blaster is asked about other sports on Cybertron by Stephen Gwynne of County Down, leading to a description of the Icon 5000, which used to be a straightforward race between the sports cars until the Decepticons started driving dirty and is now all about who is most intact by the end.

Tim Berry of Padbury, Western Australia (who is also assured his Stock Exchange is included this issue, even though it’s not) asks which Autobot is Blaster’s best friend and which Decepticon he hates most. Turns out Blaster likes all the Autobots because he’s that kind of guy and doesn’t hate any Decepticons because they can’t help how they’re made. Jeez, the eugenics stuff is everywhere in this comic at the moment.

The big thing though is Roy Madden of Derry inviting all the Transformers to his birthday party on Monday, 22nd of July. Blaster has to apologise for not being able to make it because of Unicron ripping everything up, but hopes that seeing his letter in print will make up for it. 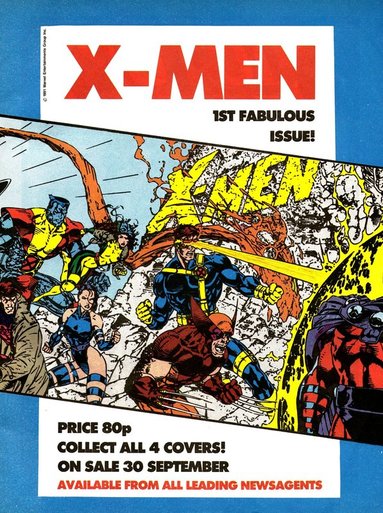 Come to me my X-Men!
A full page advert for X-Men issue 1 looks to be the first Marvel UK book to have multiple covers (four in all). But extensive research (asking people on Twitter) revealed this was just a straightforward import of the American comic, covers and all. Though, as with the previously mentioned Annual, you have to wonder why they’re bothering to make a thing of the X-Men now after years of ignoring them and with no media support.

Semi-Automatic Steve doesn’t shot Combat Colin after realising the real Colin would never give the order to kill... Which is when it’s revealed that Mutant Master is in fact Megabrain! Who gives a glorious full panel exposition speech since we last saw him in issue 299 (basically the destroyed future Earth was down to a monster from the dark side of the moon coming over the bridge, he’s being using a thrown together time belt to try and stop this so he can rule Earth himself) that sends our heroes to sleep.

Colin is woken up pretty quickly however by a future copy of the Wednesday Wart, dated December 18th 1991, declaring “Combat Colin Killed in Action, Megabrain Wins”, meaning one less Christmas card for Steve to send. Things really are getting tense as the series wraps up.

The Next Issue page is the first one in a long time not to use are from the actual next issue for its image, instead merging a Geoff Senior Galvatron from the cover of issue 260 and a Jeff Anderson Megatron from the end of Dry Run!, done so neatly looks like it was intentionally drawn that way.

Which means next week, on a Thursday because it’s TFNation time, it’s Galvatron and Megatron! 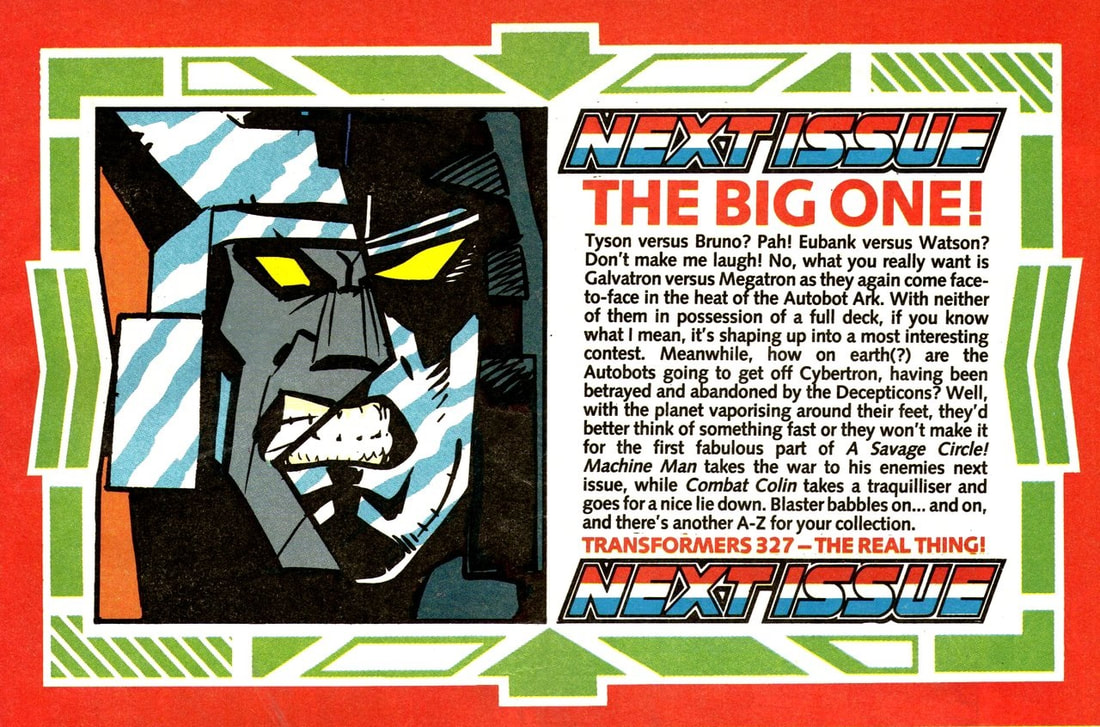