You're Not the Boss of Me Now. 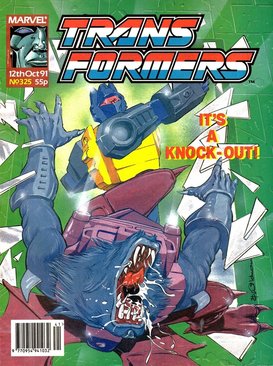 
What are we still doing here?!!


With the previous story a diversion for toy promotion, this issue sees us get back to the political shenanigans that Furman is clearly enjoying far more at this point. Not that there’s not action to keep the kids happy, as the fun cover of Grimlock decking Fangry by Wildman (who I think actually does all the remaining covers) makes sure to reassure us.

Though the It’s a Knock-Out! gag has aged as much as Wreck Gar’s Jim’ll Fix It reference. At the time that show was probably best remembered for a special where minor Royals embarrassed themselves rather than Stewart Hall’s crimes.

Inside we thankfully move away from Grimlock’s black and white take on the war with a far more basic and relatable reason for the alliance falling apart: Everything’s gone to hell and people are looking for someone to blame. 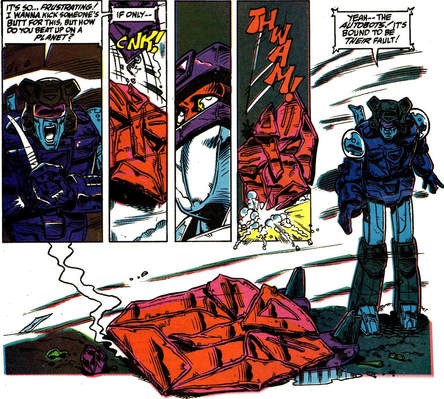 Just perfectly played.
This is signified by an opening where Dreadwind and Darkwing are rushing towards the joint headquarters for a meeting, whilst being fairly confident they know what it’s going to be about. The storm lashed planet is ripping itself apart and what’s making it worse is there’s no enemy to punch and vent that frustration on this time. Which is when the giant Autobrand hanging on the wall is shock lose and falls, crushing Dreadwind. Which makes Darkwing realise there is someone to blame... somehow it’s the Autobots fault!

It’s a shame this comedy moment, that is so well judged and clearly a nod to the British readers, wasn’t the last we saw of Dreadwind as he will get better, but it’s still a fun beat. Especially his big sad eyes as he sees the logo fall towards him.

Inside and the tensions are nicely represented by the fact the Autobots and Decepticons (all twelve of them, though Action Masters Rollout and Treadshot are hanging about) are standing as far apart from each other as possible even though they’re all unified in shouting for information. With even Prowl raising his voice and shouting to shut them up. 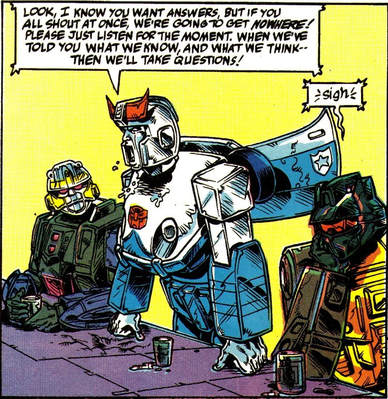 Keep an eye on Krok.
All whilst our new major character Krok sits there and watches. Who knows what plans he has, or what thoughts he’s thinking. I can’t wait to find out.

There’s some good comedy as Grimlock has enough of the angry Fangry and throws his drink at him, bouncing of the Decepticons head with a nice “TNK!” sound. There’s also a lovely panel of Grimlock contemplating another glass thoughtfully as Prowl whispers to berate him for even thinking of it.

What is unintentionally hilarious though is Fangry’s reaction to being told to sit down by Bludgeon, “Soon you learn what other Decepticon leaders before you learned—Fangry does not take orders!”

That’s Fangry who has never been seen to do anything but meekly go along with orders thus far in the comic. I don’t know, maybe he writes a strongly worded letter or something?

The key moment though is Blaster, now science guy (so I guess Perceptor is one of the guys still on the Ark? Though you have to wonder what Wheeljack is up to), delivering his report. In the end, Unicron won. The death of Primus and the beating the planet took has pushed Cybertron past the point of no return and the whole world is about to disintegrate. Leaving them with no option but to evacuate the entire planet. 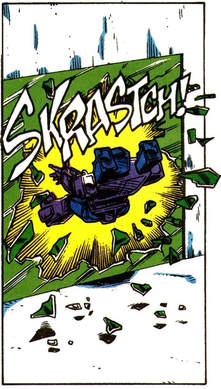 For Tailgate!
That being all twelve people currently on it.

This is also something Shockwave and Starscream have decided up, as we get a quick cutaway to them boarding the Ark and preparing to run away, terribly fast.

At the Ibex spaceport, preparations are well under way to leave the planet, but Grimlock isn’t playing ball according to Prowl’s plan, refusing to give a reassuring speech to the troops. Which again gets Grimlock’s stock take down of Prowl, that he wants to be leader himself and that’s tough cookies. Which makes you wonder if Prowl is regretting passing on Prime’s message. His look of pure unrestrained rage as Grimlock leaves the room makes a scene that is otherwise a restating of information we’ve already been given twice about their relationship entirely worthwhile.

Outside, Bludgeon and the enigmatic Krok are watching Wheeljack (downgraded from science to porter) and Quake arguing about a collision, with the wise Krok pointing out the issue is some of their troops believe the alliance can work, with Bludgeon being more on the ball and spotting the real issue is there’s one Autobot who does know the truth of things. What they really need is...

Which is a thought that doesn’t get finished as Fangry is punched through a window next to them by Grimlock for disobeying orders. Setting the stage for a fight that Bludgeon thinks might be interesting...

We sure do miss G.I. Joe...
Despite only really covering two scenes with brief interruptions, there’s a lot going on here, with the rising tensions between all the different parties being nicely ramped up. You’re left with the feeling it would only take one mistake for everything to unravel, and that the end of the issue may well be it. Wildman also remains on the top of his game, with Fangry’s beast mode especially being a drooling highlight.
Transformation is all about the Annuals this week. In particular trying to convince you that you are really missing G.I. Joe (which seems to be lacking the Action Force subtitle now, meaning the last of its UK heritage is gone), but there’s also a Marvel Super-Heroes book and specific ones for Spider-Man and, perhaps surprisingly as we’re a year from the cartoon, The X-Men get solo titles.

AtoZ covers Weirdwolf, whilst Blaster tells Andrew Wilson of Lincolnshire that Cybertron cannot turn into a robot (a ludicrous idea of course, that no one would ever take seriously) and that there’s no gravity on the planet, they all just wear heavy boots.

Meanwhile, Ross Skinner of Avon points is reassured that the toy line will continue for a while, and that Death’s Head will be returning in the new year.

This issue’s pun art is clearly meant to be called Optimus Slime, though that and the name of the artist are accidentally left off. 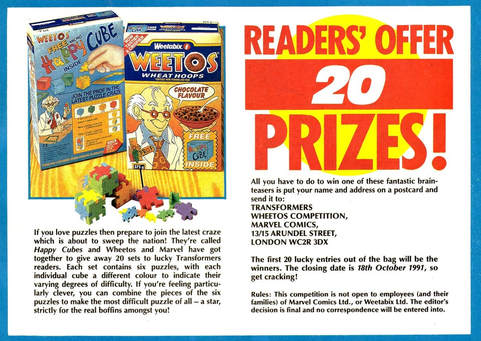 Happy Cubes eh, what was that all about?
Combat Colin is so surprised at the sight of his double, he gets punched into the River Yampy with a cheery “Be seeing you”. After a brief visit to the moon to see there’s something odd on the Dark Side, the double then tries to use hypnosis on Semi-Automatic Steve to make him take out the Moonbridge with all his guns, and when the soggy real Colin objects, Steve is ordered to shoot him! The drama is really on the up here. Considering Colin was always going to end with issue 332 even if the book continued, I think Lew Stringer is very much working towards a big climax now.

The comic has gotten together with Weetos cereal to give away the new craze sweeping the nation: Happy Cubes. I don’t remember the Peter Kay routine about them, but the first twenty names pulled out the hat will be sent some to do... whatever you do with Happy Cubes.

And if anyone going to TFNation (2018, sorry folk reading in the future) want a copy of either Transformation book for £10 each, let me know by Monday please.

Next week: Stop the world, I want to get off! 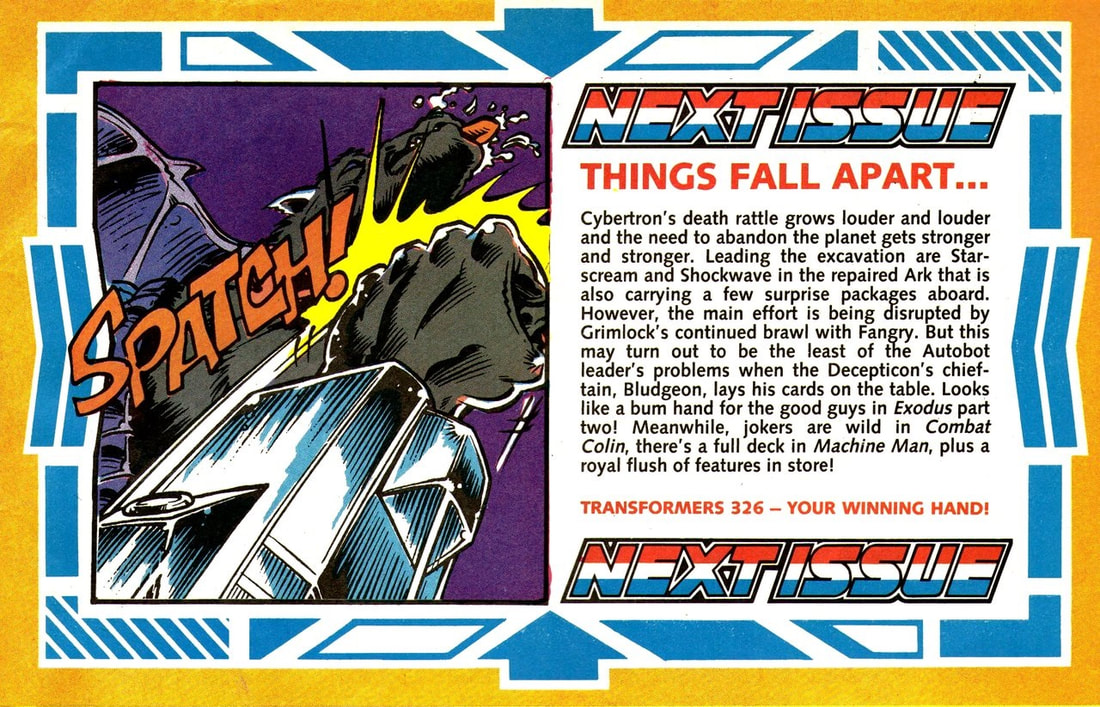