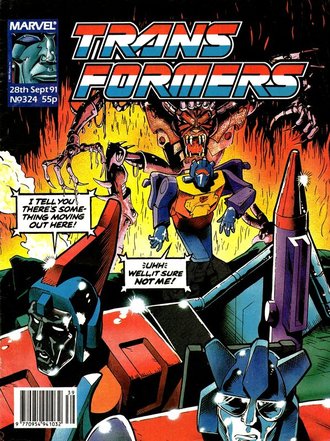 
As the humans say, “Let’s make like shepherds and get the—”


If you haven’t read the previous issue—or were an American where this was the only cover—the only reasonable assumption you can make from looking at the front of the comic this week is that Grimlock is involved in some sort of dance-off. Which, lets face it, would make for a pretty awesome comic.

What we do get, is probably the slightest issue we’ve had in some time, with the back end of the story being given over to what is very nearly our last gratuitous toy advert. That means that almost the entire thing is given over to a fight between the Dinobots and the monsters that allows Action Master Grimlock tm to reveal himself at the end and have everyone say how awesome he is (whilst acknowledging he can’t transform any more. But still buy that toy kids!).

It’s been almost exactly a year since Grimlock first thought of getting his Dinobots back, making that the longest and most drawn out introduction of a new toy in the series, suggesting a certain reluctance on Furman’s part. Tellingly, none of the other nucleon affected characters will change before the end of the series and those Action Masters who are otherwise introduced—like our hero Krok—will be done so with no fanfare and no statement they can’t transform. It feels like teeth are being pulled with the concession to Hasbro with Grimlock, though to be fair the whole thing would work much better if the AMs had just been presented as poseable toys of favourite characters rather than trying to force the not able to change thing into their backstory. 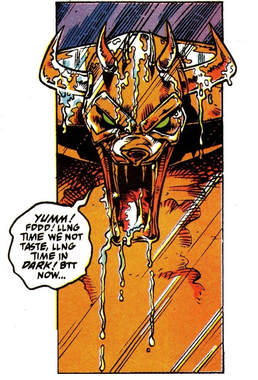 Post Unicron Cybertron will see adequate food supplies.
Before we get into the notable things about the fight, let’s talk about the one cutaway scene (and this story has a running gag of referring to the different locations in increasingly elaborate ways—“Another elsewhere altogether”—that gets lost spread over two issues) of Shockwave and Starscream repairing the Ark.

This is mainly to set up the idea that Shockwave has already worked out what the constant earthquakes shaking the planet mean, and that running is still the best option. Especially as Earth is now undefended. Something a mysterious watcher with a Jack Nicholson grin watching them agrees with.

The fight itself (and unlike two issues ago, there’s no attempt to plaster over the dialogue carrying across parts) is mainly of interest because it sets up some interesting ideas about the underground monsters that will never be touched upon again as they have only been brought to the American series to make the new Grimlock look great will never be seen again.

It turns out they’re intelligent, can talk and are well and truly pissed at being buried by Primus. All of which has potential, making this—yes!—something that ReGeneration One will pick up on and develop in a sensible way.

What really stands out though is some of the humour that’s aimed at parents rather than kids. There’s the joke from Swoop I opened with (the conclusion to which is “—the flock out of here”), which is very 1970’s working men’s club. Plus we get “Frying tonight!” from Slag, once again. Fully confirming him as the Carry On fan in the Autobot crew. All of which adds to the sense this is not a story that Furman was deeply invested in. 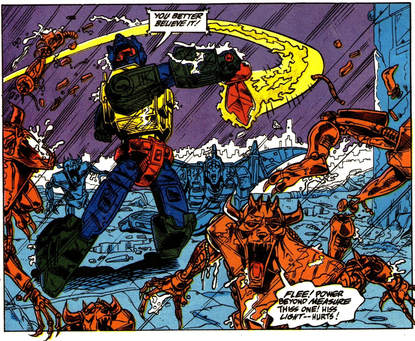 His toy is beyond our powers!
Equally amusing in retrospect is, as Grimlock orders everyone to retreat as he’s riddled with guilt this could be about to happen to them, Swoop boldly stating Dinobots never run and abandon a comrade. Meaning about three issues of IDW’s Maximum Dinobots is condensed into one panel.

The big moment comes via HiQ, now fully revealed to be Patrick Stewart. His Powermaster eyes means he can see Grimlock is actually frozen mid-metamorphosis, and so uses his fuel manipulating powers to push it through to conclusion, even at the cost of hastening whatever change he himself is going through. Leaving him wondering what the hell he’ll do without Prime there to complete whatever it is.

Sadly the page where Grimlock bursts out of the shell of his own body is one of two affected by a printing error (most notably it gives HiQ purple skin tones), but it's still an impressive money-shot from Wildman. As is the big panel of Grimlock seeing the demons off, never to be heard from again.

The big moment comes as Grimlock prepares to kill one of the demons, but is prevented from doing so by HiQ giving basically the same speech Optimus delivered to Scorponok when he was about to kill the Unicron cultist. He even directly compares Grimlock to Scorponok, saying they’re both torn between Auobot and Decepticon, walking a thin line between the two sides.

My cosplay for this year's TFN.
Which doesn’t really line up with how Grimlock has been written up till now, but will greatly inform every other portrayal of him from now on.

Grimlock is persuaded by this speech to spare the demon and uphold the sanctity of life, effectively the answer he gave to Prowl in the last issue, but with sincerity. But of course, we’ve had this from Grimlock before, so how long will it last this time?

The issue ends on a great wtf moment, as Slag compliments HiQ on his speech, saying how much he sounded like ol’ Optimus Prime. Which gets the killer reply: “What do you mean “like” Slag? I am Optimus Prime!”. Something he believes so firmly in he’s turned purple again.

Despite being somewhat perfunctory and even slightly reluctant, the fight scene is so well executed by Wildman it’s a lot of fun, with some nice gags by Furman. It might not live up to the political potential of the first half, but as we’ll be picking up on that in the next issue, this makes for a welcome if inessential bit of fluff.

Overlord!
Transformation talks about the future, in particular a forthcoming competition for a new toy called Overlord. It’s ironic we get our first mention of him right after Scorponok dies, as the toy being skipped in the West originally is what let claws stick around as Decepticon leader and become more developed for an extra two years.

Blaster however is far more bleak about the future. When Matthew Taylor, 16 year old reader from Milton Keynes who is very keen to know if there are other goth fans, begs for the comic to continue past the end of the American series and go back to producing old school classics free of the need to tie in to the US stories, Blaster can merely say the comic may continue in some form, but there will be no more original stories. The comic will rather cruelly go back and forth on this over the next few months, but he’ll basically be right in the end. This is also the first time 332 is confirmed to be when they run out of American content.

AtoZ cover Horri-Bull, reminding us that what makes him so evil is he has a game-show host for a head.

The Secret of Mutant Master! Is about to be revealed to Combat Colin as he opens the moonbridge (cutting the ribbon with a gun blast rather than scissors. Up on Moonbase Doobery the Sylvia Anderson style staff detect something odd on the dark side of the moon, coinciding with Mutant Master attacking the bridge. Much to Colin’s annoyance as he wants to meet new villains. And he might get what he wished for as he rips of Mutant Master’s hood to reveal... Combat Colin!

We also get the results of the Draw a Transformer competiton, but shamefully non of the art!

Next week, what is going on with Cybertron? 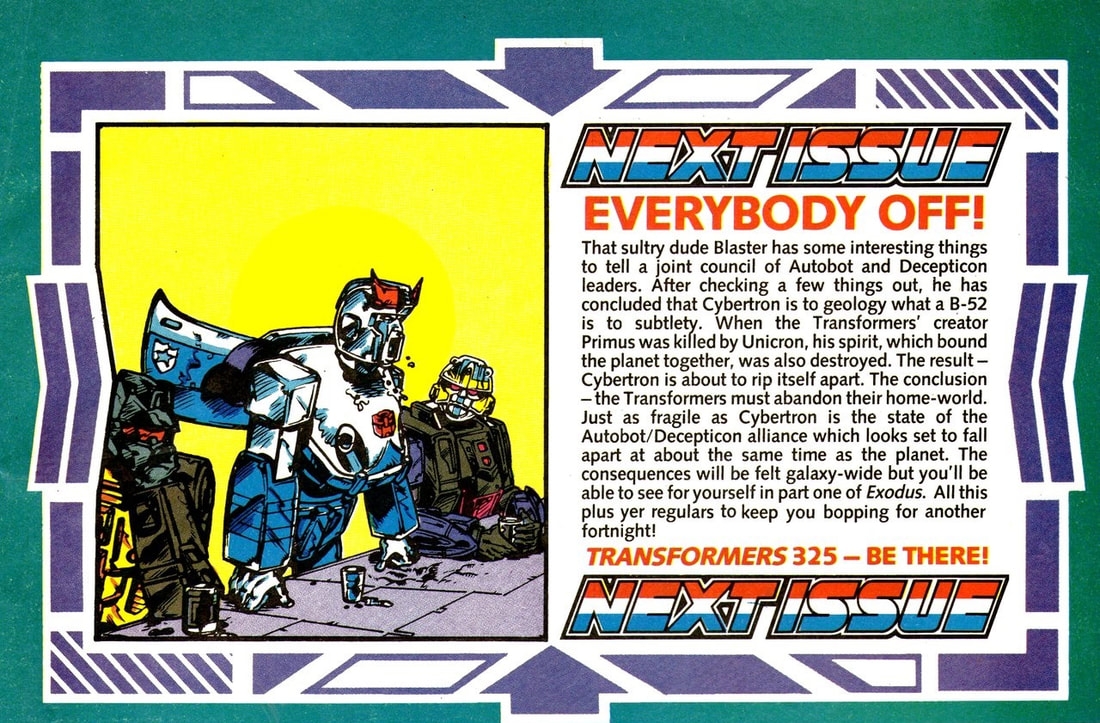