The First, My Last, My Everything. 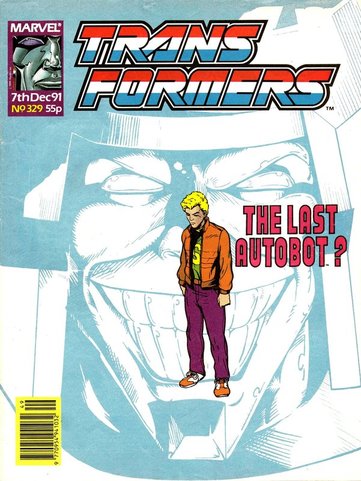 
There was me thinking I was the one who put illusions in people’s heads.


So a quick reminder up front about the charity card AUCTION, which has now been extended to the 7th of September to allow for the Transmissions podcast to do some promotion for it (and don’t forget my volume 3 supporting KO-FI either!).

This is the point we really are at the end, as we reach the first issue written after the axe fell and the series was formally cancelled. Making the choice of title a deliberate bit of irony, especially as the character of the Last Autobot was planned not to appear for some time (as a way of dragging out the appearance of Action Master Prime), so presumably even when writing the previous issue, Furman had a different title in mind here.

The focus of the penultimate story is interesting, in light of the claims that would be used to launch ReGeneration One, that there were a huge amount of lose ends left over from the series. Because instead of focusing on any of those (and there aren’t going to be a huge amount in reality), we’re looking once again at Spike Witwicky. Who was given a perfectly good send off two years ago, and I doubt many readers have thought of him since, even with that hint of whatever Furman originally had planned with Swoop detecting one Transformer split in two on Earth.

But this is the curse of Spike Witwicky, the poor guy now only has one plot. So having once rejected the mantle of Fortress Maximus, only to come to accept it as his destiny... He gets to do it again here. And again in Generation 2. And again in ReGeneration One (though there his hesitation gets billions of people killed, way to go Spike). 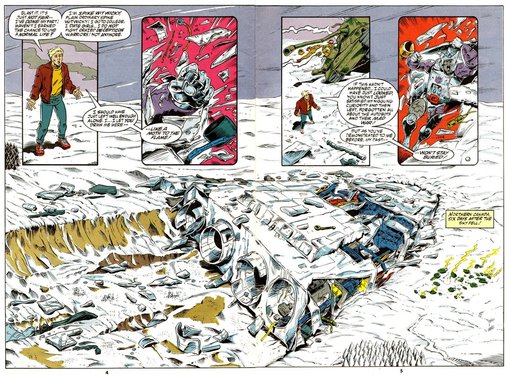 Hell of a spread.
It’s a strange story to build an issue around at this stage, if Sparkplug or Buster were involved as well it could be a nice way of bringing things full circle to the start of the series, but here it seems almost a distraction from the fermenting plot threads around it. If the Ark had crashed into Earth, exploded and never been seen again, we could have gone straight to End of the Road! without skipping a beat.

But, if you’re going to stage a diversion and retread old ground, this is as good a way to do it as any, the opening half of the issue showing Furman’s faith in Wildman as it relies on his layouts and playfulness with format to sell the story.

So after a splash page of a frustrated Spike (thinking the story title), we get a double spread showing the crashed Ark, “Six days after the sky fell”, wrecked across the Canadian wilderness, intercut with four panels that alternate with Spike venting his frustration at having been drawn back into all this by his mental link to Maximus and flashbacks of Galvatron punching his way out of the wreck.

A format which continues over the next two pages, Spike walking towards the Ark, angry at the other Autobots being gone and leaving the entire situation to him, switching with panels showing Galvatron leaving the ship and making short, nasty work of the Canadian army.

This very successfully breaks up exposition, and stops you noticing that Spike is being all “ME ME ME” whilst walking over the bodies of dead soldiers. It’s also smart to not have Fortress Maximus reply with his argument about how Spike has a destiny until halfway through, adding some freshness to the style at just the right moment. Meaning that as Spike opens a door in the Ark and finds Max wasn’t even knocked over in the crash, you’re far more invested in a reheated old story than you really should be. 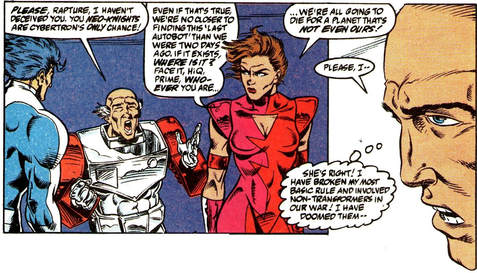 "I should have gone with the Autobots and left you buggers here"
The second half, though more directly related to the titular character, is where even Wildman’s playfulness can’t help as it’s all about the Neo Knights.

Basically HiQ successfully convinced the humans to help him escape from their box and go looking for The Last Autobot. And it turns out they’re almost completely useless at this, resulting in arguments and fights and the Prime part of HiQ feeling bad about being stuck with them.

I mean, bad about having trapped them on a dying planet.

The most amusing part is Hector, the character who was going to be dropped from the Neo Knights comic we’ll talk about next week, is the only one who is of any help as his attempts to use Cybertron’s energies links him to the Last Autobot, giving them a map to follow. 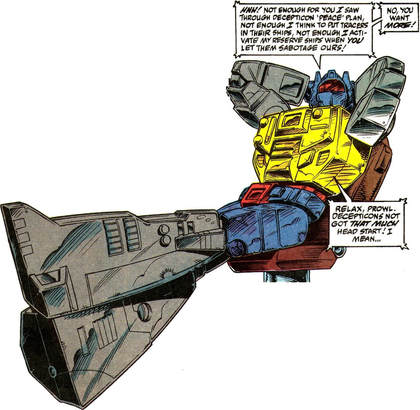 The issue ends with a two page diversion to rest of the Cybertronians, starting with the Autobots flying through space. Prowl is chomping at the bit to go faster, whilst Grimlock is really working sitting on a chair in the smuggest way possible as he points out the ships and the tracker on the Decepticons are down to him, so Prowl needs to chill. Hopefully that won’t bite him in the ass down the line.

As the Autobot leader wonders what could the Decepticons actually with such a small head start, we cut to Klo as the Decepticons go to town blowing stuff up and killing natives in some surprisingly brutal panels.


This is an issue that works in spite of itself, there’s little fresh or especially interesting here, but some snappy lines and strong art make it a solid and entertaining read, despite the dead weight of the human characters.


The end of Machine Man 2020 means Transformation promises us the return of cover to cover Transformers action with an all colour reprint of the one black and white Transformers story that should have stayed in black and white. The next issue will also give us the results of the readers survey, just a little too late to be of any use to the book.

A pertinent question.
Blaster (whose replies have switched to red and are readable again), gets two very long letters, from Stephen Hamblet of Cheshire and Christopher Lewis of Bristol, both of whom make comments about Scorponok that get Blaster very defensive on the melted con’s part. Lewis also offers to take over writing the book once they run out of content, but James Roberts had already sent in his CV.

Most notably though, David Eydmann of Lincs sends in some art based on the thinker cover of Prime, but with his head on fire (“Burning thoughts”), meaning he’s invented The Fallen a decade before Pat Lee.

One thing I failed to spot last issue was that we have had the final AtoZ, this issue instead using the double page Transformers Universe profile for Fortress Maximus that was in US#79 with no changes bar the removal of his first appearance. Meaning the very final profile in the book is something of an odd beast.

On the moon, Combat Colin can only watch as Megabrain absorbs the monolith and becomes the very monster he had read about, barely stopping to destroy the moonbase’s new defence vehicle Superthunderstingball XL90 (we’re approaching the Thunderbirds repeats on BBC2) before heading off to Earth. Meaning some serious nostril flaring determination from Colin as he swears the villain must be stopped!

Next week... The Last Autobot! 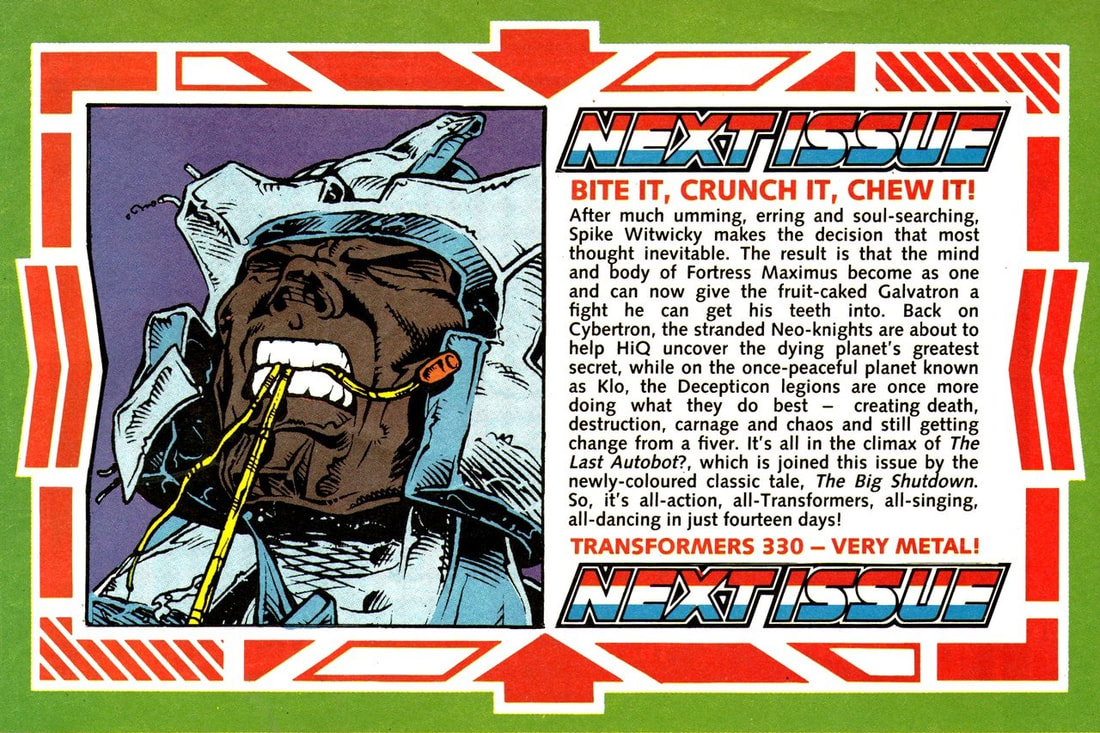