I Am Happy to be Stuck With You. 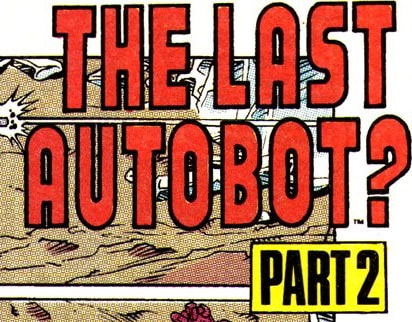 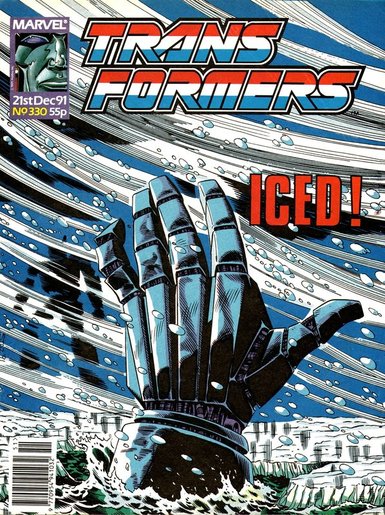 
Another big last this issue, as we have our final original British cover, by Stewart Johnson despite my previous claim all the remaining ones would be by Andy Wildman. Sadly it’s not one of his grand painted efforts, but its image of Galvatron’s hand sinking beneath the ice (a visual steal from the end of that Summer’s big film, Terminator 2) still manages to be a spoiler for the end of the story.

The fact that this is the last new cover when there’s two issues left does suggest that perhaps the future is not as rosy as the insides try to make out.

On the other hand, the second part of our penultimate story opens with things extremely rosy for Bludgeon, cutting a swath through the destruction of Klo with such confidence he’s even out of his pretender shell for the second time ever. His main man Krok—now talking in paragraphs, so we must be coming up to the big iconic moment he’s been preparing for—is even able to make light of their single casualty being the result of one Firecon setting fire to another. 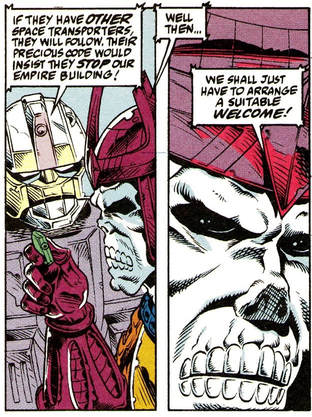 You go Krok!
This does leave Bludgeon rather bored, which means Krok is able to cheer him up by saying he’s found the tracker the Autobots planted on their ship and that means a real fight is probably coming.

Which is where we leave behind the overall plot advancement and head back to the cul-de-sac of the Spike story. In order to drag it out, rather than having Spike just put the hat on and go fight Galvatron, he instead has a good think about it before deciding, once again, it is the right thing to do.

It then turns out that Fortress Maximus, the famous pacifist, is rumbling for a fight and goes off to twat Galvatron over Spike’s protest. Which makes you wonder how the human thought the giant heavily armed robot would deal with a crazed Canadian killer.

The confused Galvatron’s flashbacks to the Ark (where Shockwave isn’t nearly as battered as I remembered him being), complete with jigsaw style lettering boxes, is the highlight of the issue. And, once again, he tries to battle the madness eating at his soul, only for Fortress Maximus to shot him in the back, sending the guy into a mad rage.

The following fight is well drawn, with the drooling Galvatron biting Max being a highlight, but the internal struggle between Maximus and Spike over the shoot first ask questions later moment is lacklustre and tired and—considering its result of them deciding to be a proper team is undone again, twice—completely irrelevant. 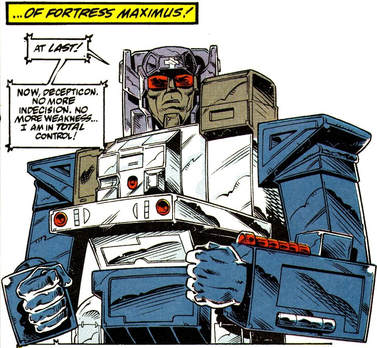 Till G2.
But Max does get to use his leg guns, and Galvatron’s final fate (as far as comics actually published by Marvel goes) of being chucked in a frozen lake is hilarious. Otherwise though, whilst never straying into bad, it’s probably the least engaging bit of material not involving the Neo Knights in some time.

Speaking of the Neo Knights, Dynamo’s energy powers means that he’s able to leave Cybertron’s remaining population to the Last Auobot and wake him up! Which makes for an impressive splash page to end on, and means the issue can lead into the finale with a real sense of anticipation.

I did promise to talk about The Neo Knights comic Furman and Wildman pitched around this time. So, you can read about what we know and see some (ridiculously 90’s, not that it would have been a problem at the time, but it looks so try hard it feels like writer and artist are already from another, past, era) art HERE.

But basically it would have taken the characters (only one of which Marvel owned, were they counting on Hasbro not caring about the rest?) as a stock X-Men team, renamed Techno-X with Blackrock as their Professor X, specifically fighting the robot villains of the Marvel Universe. Not a bad pitch considering how Mutant Mad Marvel were at the time.

The bizarre thing though is how ashamed the pitch is of it being a Transformers spin-off. The entire 80 issue series would have been written off as a Holodeck style training exercise for our team. Yes, even the Micromaster wrestling and Joey Slick.

Punch drunk.
Oh, and Dynamo wouldn’t have been real either, despite being the only one to have been of any use to date. You’d have thought just presenting them with no reference to their past adventures would have been the simplest bet, but it’s hard to see this being anything but alienating to the only people you could guarantee would be inclined to give it a try.

Whether the comic would have been able to overcome both the dodgy central concept and how terrible the characters are is harder to say. Certainly with such wholesale revisionism, Furman could have fixed their personality issues as well. But, based on what we’ve seen and considering Furman’s run on an actual 90’s Marvel Mutant book with Alpha Flight is poorly regarded, Marvel were probably sensible in turning it down.

Transformation puts the description of this issue to the sidebar in order to give us Exciting News, despite all the bemoaning from upset readers, the book will be continuing! Issue 333 will be monthly, 36 pages with a five page new story, ten new coloured (presumably old two black and white stories a month) and...err... the return of its already into its death throes G.I. Joe.

I have to say, I’m kind of glad this didn’t happen. We get a good, clean ending with 332 and the five page stories were always all over the place in quality. Fairly recent reprints and an unpopular backup would likely have meant six months at best. Paul Neary is often painted as a villain by fans for making the decision not to go ahead with this, but from an objective perspective Transformers was done at the time beyond running the licence out with some specials. 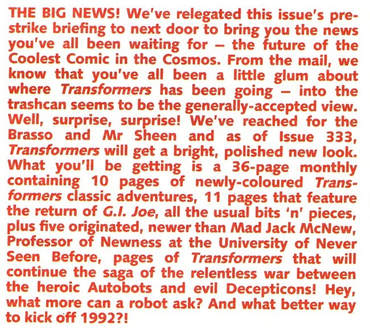 Phew.
I’m also curious as to who would have written the new content. Furman was focusing on his American career at this point, which as we’ve just discussed involved pitching comics that literally said Transformers never happened. Considering for someone aiming to hit that next stage of their career, it would be a step back, a favour for a friend. And as Paul Neary had just fucked up Death’s Head for him, how keen would he have been to do a favour for Marvel UK at this point?

Mind, there are hints that this idea was abandoned almost as soon as this page was written, so no more thought than announcing it may have been put into things. One hint coming from Blaster, who tells Martyn Sargeant from Scunthorpe that his ideas for more Marvel crossovers (and boy is the Autobot scathing about the idea of the Punish meeting the Transformers) have come too late now.

Meanwhile Carole Dewson of Endmonton asks about where you can buy The Transformers: The Movie soundtrack, to which Blaster has to sadly reply that it is no longer available and she will have to try second hand record stores. Imagine telling people in 1991 that in 2018 the soundtrack would not only have been re-released, but on pretty much every format except tape. Including two different versions of the vinyl and one that floats through the air and plays on your phone.

But the last word has to go to Tanya Dean of Sydney, Australia, who writes in to ask if Blaster has ever been told that Optimus Prime has a sexy body. And thus shipping was born. 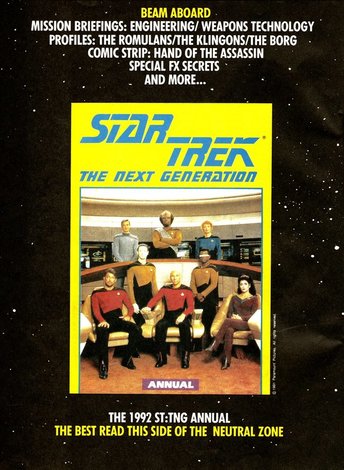 Exciting cover.
With Machine Man ended, the backup becomes a colour reprint of the perfect for monochrome The Big Shutdown! This may have been intended as a teaser for the new format, but at least it lets you revisit a classic.

Megabrain is wrecking havoc on Earth, not just destruction but making people think that Cilla Black is on every TV program and it’s raining ants in Dudley. Luckily Combat Colin is able to calm everyone down before the panic button is pushed by telling mankind to mellow out.

Sadly his attempt to blast Megabrain with his radiation-free mega-nuko pistol just pisses the giant off. Is this the end for our here? 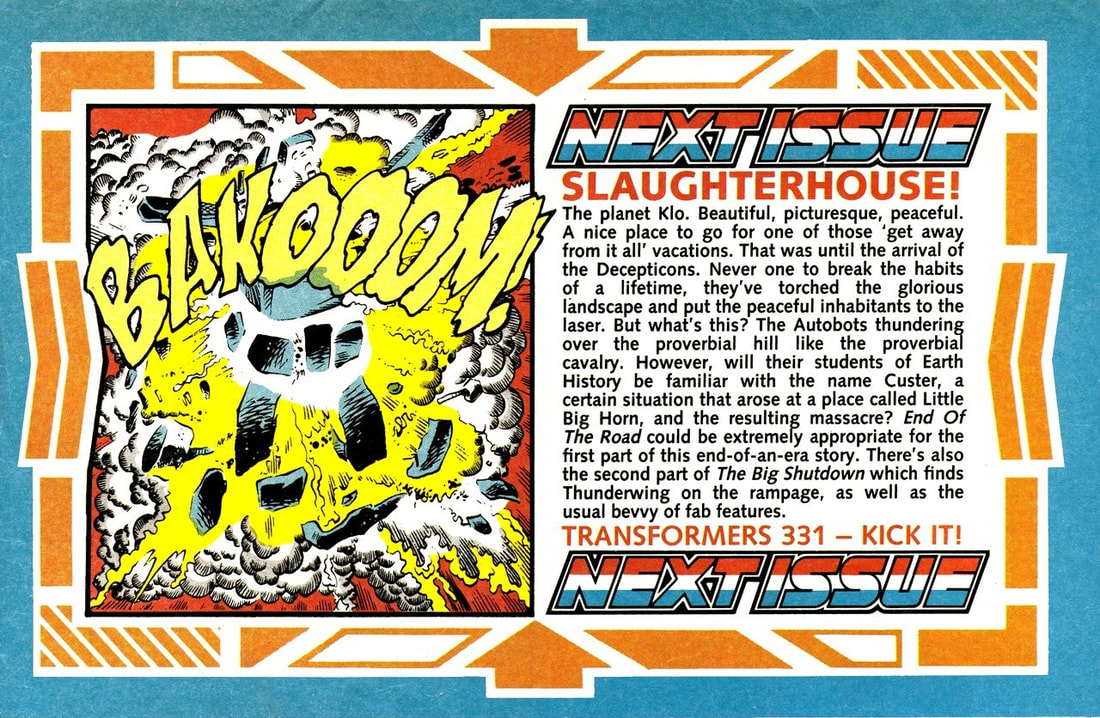