And Now, the End is Near, and so we Face, the Final Curtain. 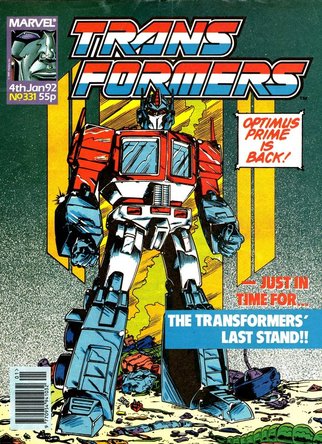 
I’m not the one who got us into this mess and got our butts soundly kicked!


You only have to look at this week’s cover to know that any hope of issue 333 must have gone out the window within about thirty seconds of the last Transformation promising it, the image—interior art from the second half with a tag line slapped on it—looks like it took about 30 seconds to make by someone on their way out the door.

The worse thing though, is that the promised return of Optimus Prime doesn’t actually happen in this first part. We’ve had some spoiler covers over the last year, but this is the first time they’ve blown a plot twist in the next issue. What’s especially galling is that the moment that inspires the American cover, of Bludgeon preparing to slice Wheeljack with his sword, actually does happen here, so the two being the other way round would make a lot more sense and allow the series to bow out with an Optimus Prime cover.

Inside, we see a return of a favourite Furman structural device, starting in media res before having a flashback to explain how we got there. In the days of 11 page UK stories it was a handy way to move the story along quickly by summarising the duller bits, which leaves the feeling that there was probably going to be more than one issue devoted to the liberation of Klo before the axe fell. 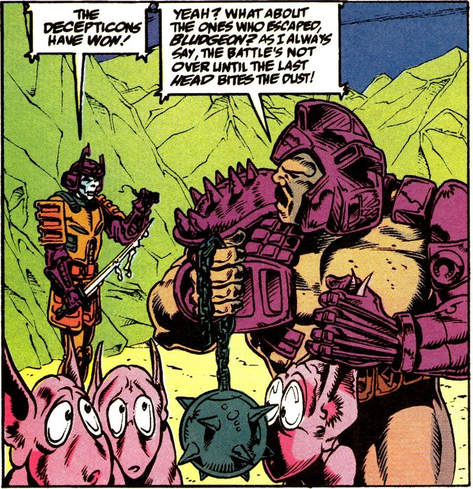 Don't think about what that guy's head is up against.
And the final story means the final chance for a running gag, as we open with Dreadwing performing a close quarters bombing run on Getaway for the sake of a “...this time Getaway, you’ve been got!” quip. Which may remain the best Getaway death.

The watching Bludgeon is unimpressed by the combined cons’ grandstanding, but has to accept that generally it’s been a very good day as he walks through the bodies of dead Autobots in what would be an impressive half page if the clearly already retired Yomtov hadn’t gone to town with the block colouring. As he prepares to deliver the coup de grâce on Bludgeon he declare the war (and comic) to be “Over...finished!.

An incredibly butch looking Stranglehold isn’t so sure though as some Autobots did escape, but Bludgeon has no worries as he’s put his best people on the case. Though as this team includes Fangry and Weirdwolf, he may be taking the piss.

Wait, where is Krok during all this? He’s very suspicious by his absence. Dude must be up to something, I can’t wait to see what.

The Decepticon hunting team manage to pass by a swamp that, in the final homage from Furman to Bond (in this case Dr. No) the remaining Autobots are hiding. Oddly their number includes Grimlock, who I can’t really imagine ever running from a battle, especially as the other Dinobots bar Slag seem to be amongst the dead.

It’s here we get our flashback, and with it one last great Prowl scene as he rips Grimlock apart for his poor plan once they got to the planet, choosing to attack straight away with no preparation rather than planning for strategy, meaning they walked straight into an obvious ambush and their ships were quickly blasted out of the sky. 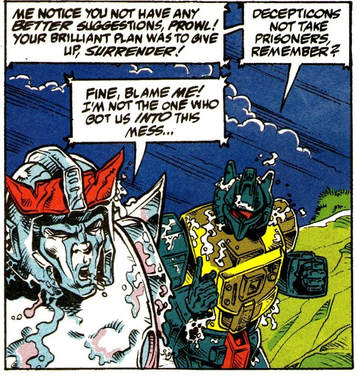 Tired: Dratchet. Wired: Growl.
This is Prowl at his best, he’s not just a dick for the sake of being a dick, but has a valid point and should be listened to rather than ignored. This is something almost every other writer who will handle the character since has managed to forget.

The argument is interrupted as it turns out Fangry was only pretending to not have smelt them for fun, and wouldn’t it be nice if Blaster being the first Autobot to be shot was a final nod at the UK letters page? What’s hilarious here is Fangry acts incredibly pleased of his tracking skills when the really loud verbal bashing Prowl is delivering to Grimlock means Blind Pew could have found them.

At the main Autobot graveyard, Bludgeon is about to slice Wheeljack’s head off. Which would make a good cover. Though, to be fair, the US cover implied Optimus Prime is about to jump in and save Wheeljack so as not to ruin the delightful surprise for readers that Thunderpunch bounces in and kicks Bludgeon in the back of the head.

And how wonderful it is the Neo Knights have returned (and Lee even calls them by name, as if that’s a thing Bludgeon would have any idea of), it would be terrible if the series ended without one last change for him to say “Aye”. And the three super-humans holding their own against the Decepticon leader in no way makes the Autobot army look pathetic for falling so easily. 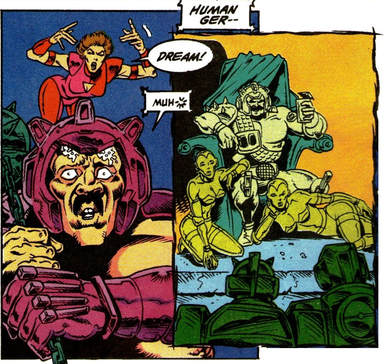 What is that white stuff running down his forehead?
And it’s also good we get one final bit of what the fuckery from them, as Rapture uses her mojo on Stranglehold and it turns out his fantasy is half naked women with massive boobs. Because Transformers are genderless, right Si?

Though Stranglehold accidentally whacking Bludgeon in the face with his mace as a result is more hilarious than trying to pretend he’s heterosexual.

The issue then ends with Thunderpunch promising us someone is about to arrive. But who can it be? There’s no way to find out till the next, final issue.

Despite some flaws, this hits the ground running nicely and has lots of good action and some pathos as we see just how pathetic the dead Autobots look. Though there’s some fudging going on, it feels like the series is about to go out on a reasonable high.

There’s no talk about the future this time on Transformation, but the sidebar feels like a bit of a slap in the face to Furman, not only is his main writing gig cancelled, but it’s being used to go on about how great Death’s Head II is going to be. It’s also keen to emphasise that this book will only be available from specialist comic shops, but that there will also be a bi-weekly book featuring all the new Marvel UK heroes more widely available.

Natural progression, my arse.
Said book being advertised after the lead strip. Digitek (presumably, though the logo makes it look like it’s called DigLtek), promises us all new adventures form Hell’s Angels, Digitek (ah!), Motormouth and Pendragon (the knights of whom get their own advert). Notably no Death’s Head II is mentioned. It seems this book was renamed (presumably to not make it so focused on a character no one has heard of) as I can’t find any evidence of its existence, but a book with almost identical contents called Overkill does launch in April 1992.
It’s also worth noting the oddness of promoting books that won’t be out for four months, but this is the last chance to make Transformers readers aware of it. Either way, it’s probably good the book is ending here as no series ever benefited from being published by Marvel UK in 1992.
The colour version of The Big Shutdown! concludes, and it’s worth mentioning the colours are by former editor Euan Peters. Who it turns out is much better at crayons than editing.
There’s no Blaster this week as we instead get a two page Combat Colin. Normally I’d assume this was two issues worth stuck together as has happened in the past, but as the natural cliff-hanger is just before the first page ends, it looks like it was intended to be in this format all along.
It starts with Colin being annoyed that Steve and the Gigglies are falling over themselves to act as human shields for Colin, this is his comic, and if there’s going to be a heroic self-sacrifice, he’s going to make it. Which he does, getting zapped and going to that great Combat Shed in the sky!
Over at the real Combat Shed, after Steve remembers to press the button Colin gave him, the real Combat Colin emerges! It turns out that, to beat the pre-destination paradox, he created a clone of himself to die. Which is a bit brutal on the clone. 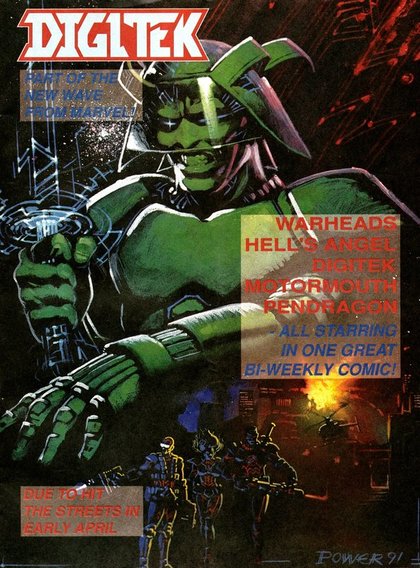 We all remember DigLtek.
But Megabrain has a twist up his sleeve as well, ripping off his bodysuit to reveal he was TV prankster Jeremy Beatle all along and this entire thing has been an elaborate prank. Steve trumps this to rip off his face mask to reveal he was really Michael Asprin and he, and the Gigglies, have spent the last five years setting up Colin for This is Your Life.

Though as Asprin walks off, he rips off another face mask (all very Prisoner) to reveal he was actually Megabrain, at the same moment Colin finds the Big Red Book is actually a bomb... which explodes.

Which is when Colin wakes up next to Steve in a hair-dryer looking thing, to be confronted by Megabrain as he looked back in 1989 (turns out his suit is blue rather than black)! Which turns out to be because this is 1989 and the last two years have been a Megabrain created dream to send Colin yampy!

And people think Lost Light is getting quite involved at the end.

After that, an advert for the Doctor Who Magazine Winter Special: UNIT Exposed, “Produced in association with journalists from The Metropolitan tm” looks normal.

The next week box has clearly decided that the cover blowing the big return next week means there’s no need to be coy, cheerfully talking about how Prime has been brought back. Though oddly it calls both Prime and the Last Autobot “Demi-Gods”. What it is coy about though is whether next issue is indeed the end...

But first, a story set after, but released prior. 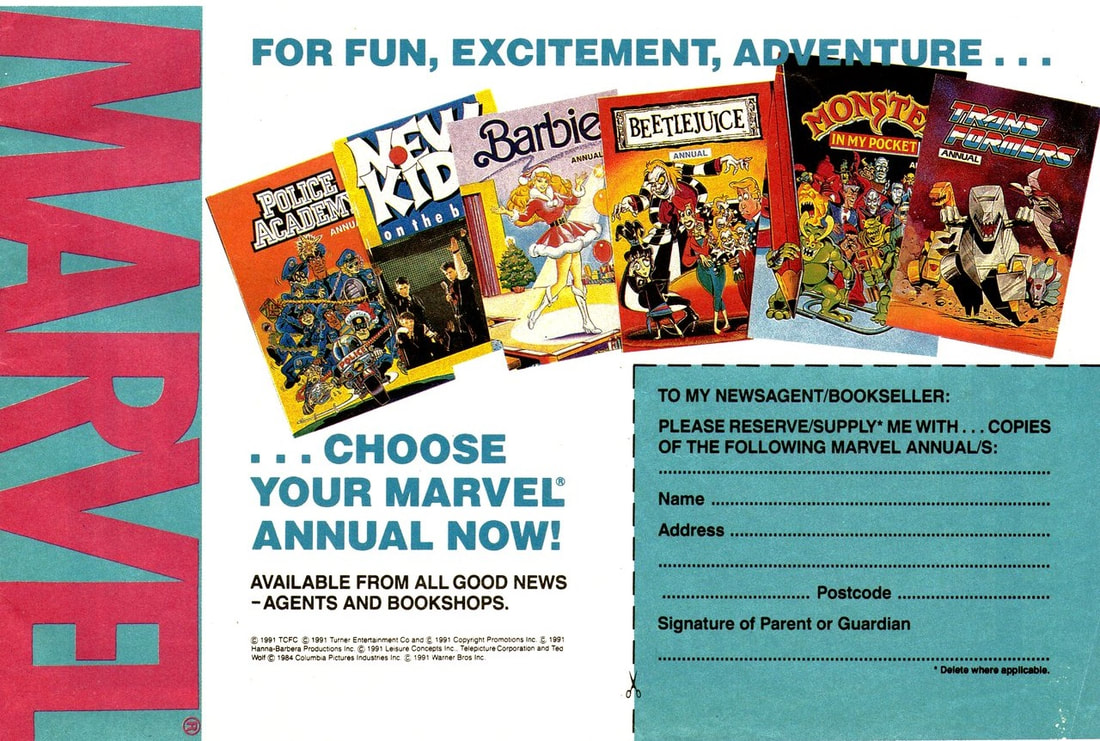