Looking For Some Happiness, But There is so a Loneliness to Find. 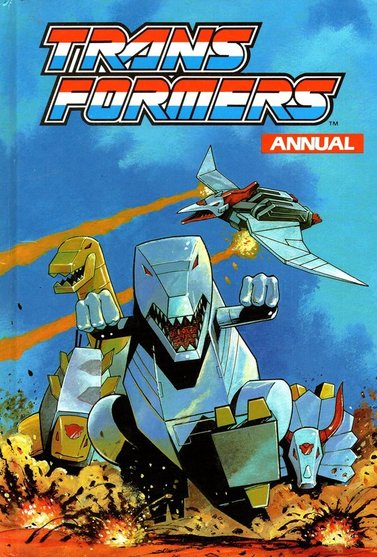 
*The “Published by” blurb calls it the 1992 Annual, as traditional with British publishing. But as this is the only Annual to have this and the early ones were promoted using the name of the year of publication, I’m keeping the formatting consistent here at the end.


The Hunting Party.
Way of the Warrior.
Survival Run.
A Savage Place!
Cry Wolf!
Wolf in the Fold!
Where Wolf?


Why was someone chanting that old name?


Well, here we are then, the final Annual. Wrapped in a Jeff Anderson Dinobot cover, which feels right and means the book’s longest serving contributor makes it right to the end.

Because all talk on this book tends to focus on the text story, just how lacklustre the whole package is tends to get overlooked. No profiles, no quiz, nothing outside of the prose that isn’t recycled content. The only bonus material is a reprint of the Combat Colin strips from issue 290-293. Which is nice, but they managed to pick a storyline in Robocol2 that follows directly on from the previous, not included, issue.

From the opening introduction, “Things may come and things may go...”, the book seems to be assuming the weekly would indeed be at the point of ending by the time kids got it on Christmas day. However, though it may not have been intended as such, the format being to present a bunch of old black and white stories in full colour was the plan for the hypothetical issue 333, so the perceived failure of this Annual may have been a factor in that not happening. 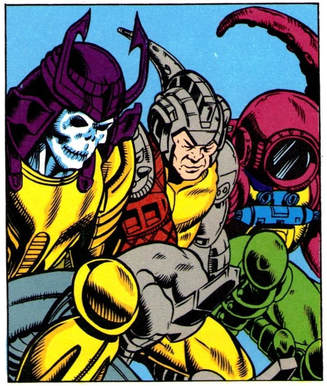 Without the moustache, Stranglehold looks like Sid James.
And the fact the book was a failure can be summarised from the fact Marvel would keep the licence going with specials for another two years but not produce another cheap reprints Annual in that time. Though if sales were low, apathy from Marvel over promotion likely had a hand in it as well.

Which bare bones bring us to the main event, the text story. Before getting into the nitty gritty, there’s a good chance the title which doesn’t really connect to anything in the story (beyond the framing device being set some time later), has a good chance of being named for the obscure Sean Connery film Another Time, Another Place which, if the finest Furman Bond homage style, gets name-checked in Thunderball as an in-joke.

The story is the first of our many, many continuations of the original comic. In many ways it’s rather like Dan Dare, there’s lots of mutually exclusive takes on what happens next, though unlike Dan they’re almost all written by Furman. Suggesting a restless author who never quite came up with a finale he liked. Or someone who likes to work and will always take an offered gig. I’ll be talking about some of the others in turn (sorry fans of the Fun Pub stuff, other than this sentence, that’s all you’re getting), but I think it’s important to say that it’s possible to like more than one, and in terms of “Official” status they’re all Hasbro approved and as valid as one another. If you wind up disagreeing with me about which feels the better fit for what happened next, it’s all gravy. 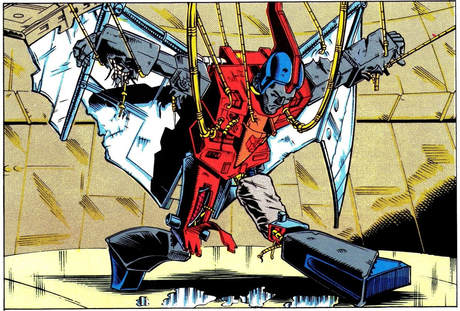 Me after writing three Transformations in two days.
The first thing to note about this story is the real weak link, the framing device. This is Optimus looking back from centuries in the future and going on. And on. And on. In the most incredibly pretentious way that isn’t remotely how Optimus Prime talks. “An enemy flailing blindly in a fog of destructive fervour” indeed. Unfortunately this rot will take hold for the all of Furman’s future writing on the character, especially in ReGeneration One, but as it will be rare for him to have lengthy internal monologues it’s especially bad here.

The main purpose of said framing device is to suggest at the conclusion that IT NEVER ENDS as Optimus has heard of a new, more dangerous breed of Deceptions has been found out in the galaxy. Which suggests the basic idea for Generation 2 was already fermenting.

In an idea that would be recycled fully into ReGeneration One, Prime is also depressed in the main bulk of the story, set immediately after End of the Road! (which is recapped at length, so any kids getting the book for Christmas would have had it ruined), but here there is the additional trauma of HiQ having sucked up a load of Nucleon from Grimlock had him having become an Action Master as well. In Reg, living on a peaceful planet for twenty years in good health is what really gets him down.

Being an Action Master as a curse is the key thing here. When Furman was finally forced to introduce the concept to the comic, he had to bang on about how amazing it was. Here at the end, with Hasbro UK not caring for the gimmick anyway (the European line going right up to G2 is arguably down to them downplaying those toys as much as possible and putting extra, transforming, content out), he gets to let rip on this, as the story calls it, “Sick joke”.

And let’s be under no illusions here. Other than killing a few extra Decepticons, this story doesn’t add very much to End of the Road!, the status quo at the end is largely as it was at the end of that story. It’s entire purpose is to say Action Masters were a terrible idea and to get rid of the concept forever. 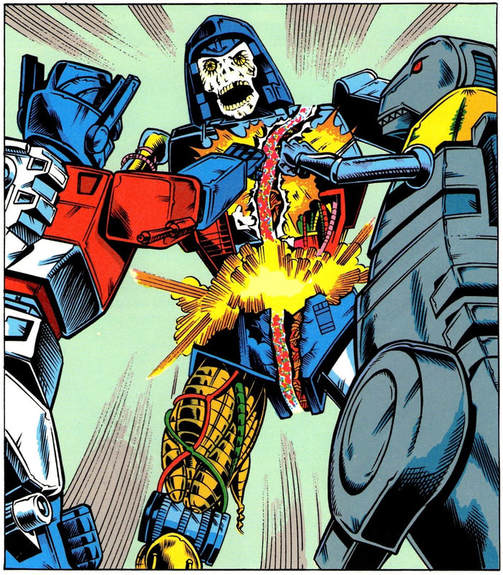 The old trigger crotch was his big weakness all along.
So, to that end, Girmlock and the Dinobots (all now Action Masters as well, bar Slag), have heard the scientist on Hydrus 4 have invented a new type of Nucleon that can cure them, and so head off against orders to try it out. Bludgeon’s Decepticons however want the plain old regular Nucleon to revive Megatron after stealing his corpse from Earth and follow Grimlock to the source. Which lets them capture and torture the Dinobots whilst waiting for the technicians for restore their leader.

Luckily, Prowl was able to track Grimlock’s shuttle and a rescue team arrives, who defeat the Decpticons, and kill Bludgeon before Optimus Prime and Grimlock together punch the stumbling Megatron corpse so hard it splits in two. With the new nucleon having cured the lead Dinobot, everyone goes home happy.

That sounds slight, and to an extent it is. Indeed, there’s a fight with a giant monster on the way to the nucleon source that is blatant padding, it’s demonstration of Grimlock’s frustration at not being able to change shape being something that could have been done in the main fight. Paradoxically, the ending is also very rushed, it especially not being clear what happens to most of the Decepticons (captured? Fled? Killed?), dropping the monster and the framing device could have helped things end a bit more smoothly.

It’s also not really clear how the Decepticons managed to arrive at and take over the facility before the Dinobots got there when they were following them to the planet.

But, there’s a lot of good stuff here. Prowl, wrestling with his guilt over trusting the Decepticon alliance, and Grimlock, put into a similar position over having taken Bludgeon at his word when he fled Klo, are both extremely well written in counterpoint to one another.

The sense of loss caused by not being able to transform any more is also extremely well conveyed, and feels very much an influence on Eugenesis. As do the fantastically brutal descriptions of the Dinobots strung up after being tortured just for fun (though it feels like the end was supposed to be more violent originally, it’s not really clear how Grimlock and Prime punch Megatron into two and Staz struggle to convey it in the art).

The cult worship of Megatron—amusingly in relation to what happens in G2, with Bludgeon as its biggest cheerleader—with the assembled cons chanting his names is also fantastically done. Indeed, as with The Magnificent Six!, Furman also writes excellent prose when not trying too hard. 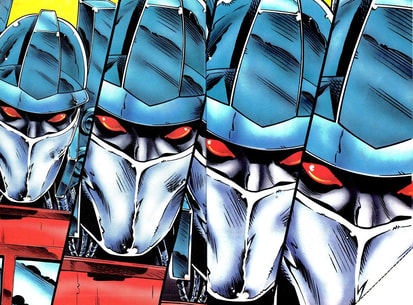 Even the end-pieces are rubbish this year.
The story delights as well from all the little fun moments put into it, from a random Springer appearance to the return of Budiansky Grimlock as he thinks of “Fortress Windbag”. It’s tremendously satisfying, and a good call-back to the earliest days of the comic, that Grimlock thinks as fondly as he ever thinks of anyone of Ratchet.

The illustrations from Staz and Baskerville, are generally strong, even if the torture of Swoop one isn’t as brutal as the text makes it sound. One oddity though is that, with the exception of one extreme close up of his face, Optimus is only seen from behind. Is this to show off his shapely buttocks, or was a character design not available at this point?

So despite being a story with weaknesses, this still winds up a winner, though it’s perhaps best viewed as an Action Master fan baiting coda to End of the Road!, rather than an epic continuation in its own right. However, I think the best “What happened next?” is still to come. With the Annual being so rare and expensive (and as it looks like this story is never going to be reprinted), I’d recommend looking out for the scans that are out there rather than trying to get hold of what is otherwise a very sad feeling book.

Next, before we hit the final year of the book, the 1991 Collected Comics! 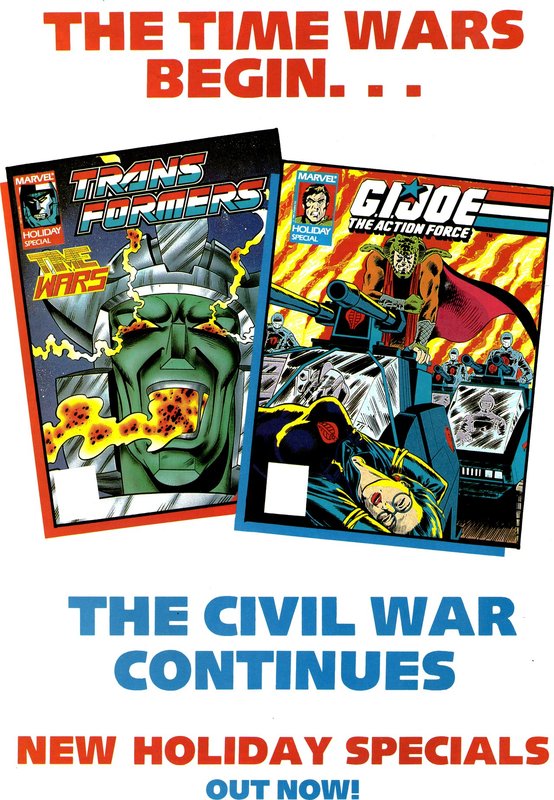