Arm Yourself, Because Nobody Else Here Will Save You. 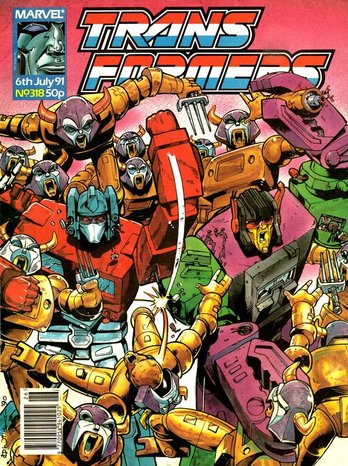 
Then how in the name of creation, did you miss THAT?!


One of the problems you can have with serialised storytelling is that when you’re working to a specific page count over a certain number of instalments, you occasionally have to tread water to get where you want to be at the right time. And that’s arguably what happens in the back half of The Void!, as Furman introduces an idea and cast of villains that don’t really fit in with what we know, just because he couldn’t have Unicron show up and end the issue on the 11th page.

This however shows why this isn’t automatically a bad thing though, as Furman takes the opportunity of having to introduce a slightly contrived action scene to advance the characters and bring the two sides of the alliance firmly together.

This starts straight away as Shockwave and Starscream (well, it’s Starscream who does the talking, the one eyed monster still seems shook up) telling Scorponok their personal vendetta isn’t over yet. Which lets the clawed one have an excuse to take Optimus to one side for a private strategy session away from his enemies. 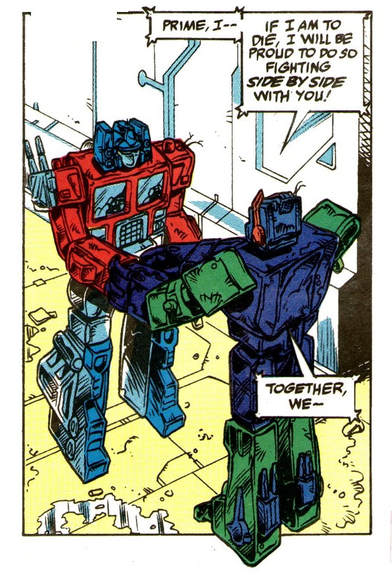 Careful speech bubble placement to spare us Scorpy's buns of steel.
Though once alone, the truth is he just wants to unburden his soul about how afraid he is of dying. A sentiment Optimus agrees with, he’s no desire to throw his life away on a disinterested God’s whim. It’s a nice touch that he’s especially reluctant to die after having done so once already. But if this is the end, he will die like a Transformer. Which gives us the long delayed handshake between the two, not done under the duress of a surrender or a threat, but as equals acknowledging friendship.

Which is where our slightly contrived element parachutes in, as the guys in Unicron hats attack, quickly running past Scorponok to kill Optimus Prime. Which leaves the Decepticon with a choice: They’re not individually a threat, but collectively there are too many of them not to be overwhelmed in the end. Does he fight for an enemy, or run for himself? Of course he decides to fight. But doesn’t think of calling up for help first.

Luckily they have a guardian angel in Galvatron, who first takes care of a minion about to lob a grenade at Optimus by shoving it in his mouth whilst cheerfully delivering exposition about not liking Prime either, but he hates Unicron more. He then uses his cannon to send a distress flare to summon the others.

Which is where we get the ultimate irony. It’s not speeches, ideals or a bigger cause that brings the Autobots and Decepticons together, it’s gratuitous violence, the sheer unbridled joy of getting to kill things convinces the Decepticons this alliance isn’t all bad and the Autobots quickly join in. With the final act that solidifies the alliance (and shows yet more character development for Scorponok) comes when Optimus talks down the Decepticon leader from killing the last remaining cultist, once they’ve won it becomes just pointless slaughter. Unicron’s plan here has unified them more than anything else could.

Never forget the safety word.
Said plan is where we get the awkward part. Primus explains that before they were completely separated, Unicron planted mental controls in several of his followers, so they would rise up and kill the declared leader of the alliance when the time came.

Now, this not only contradicts any previous version of the Unicon/Primus backstory where they were already no longer in that sort of contact when Primus created the Transformers, you have to wonder when Unicron didn’t have them reveal the location of Cybertron to him at any recent point instead. Or go into the Primus chamber and shoot God in the face. Nor is it clear how he’d have known millions of years ago that there would be Autobots and Decepticons and the need for a specially declared joint leader. Why do they even bother with the special hats? It all feels like the cult was created about five minutes before Furman first wrote them in.

But the good stuff surrounding it continues from its aftermath as Prime realises Primus only named him as leader to be the lure in a trap. Which is where he decides to have a word with God, before the crippling pain hits him again.

There’s no chance to find out what’s wrong with Prime though, as Kup asks the very smug Primus about his mental link with Unicron and whether it really means he knows what the Chaos Bringer is doing at all times. When the answer is affirmative, Kup reasonably asks how the hell he missed the fact Unicron is now right above them in robot mode and about to claw the planet. 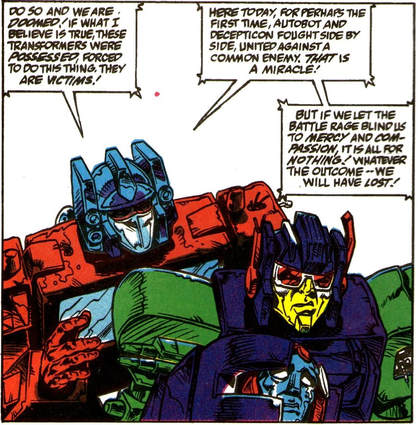 Never forget the safety word. Seriously.
Which is a reasonable question. Sadly there’s no chance for him to follow up by asking about the toilet door signs on his chest. Still a hell of a cliff-hanger though.

This is, despite the awkwardness of the cult, a good character issue that nicely brings everyone together (including Thunderwing, who gets a cutaway page showing him heading off to Cybertron for revenge), ready for the big moment.

It’s probably a good moment to talk about Wildman and the fact he won’t be drawing the next story. Now it is a double issue, so there being a need for an extra artist around this time makes sense. But the norm, and certainly what was the case when Delbo was the lead artist (up until the point Senior came aboard, there’s a pattern here) is that in a situation like this, your regular artist would draw the big important issue, and if another was needed to keep on schedule they’d do a less overall important one either side. So, Geoff Senior drawing The Void!, and Wildman on Edge of Extinction! The fact it didn’t happen that way is a reminder that this would be Senior’s book in a heartbeat if he wanted it rather than just doing the occasional gig for his friend Furman.

Now, I’d not want to change a panel of the next four weeks, but this does feel a shame for Wildman, who remains on fire here and does at least get to do the great final full page money shot before handing over the reigns.

Transformation welcomes the return of Machine Man 2020 with the sidebar being given over the recapping the story so far. It’s nice to be back into this story, especially this part with its depiction of people slaved to their computers and unable to look away from them. What a crazy vision of the future. 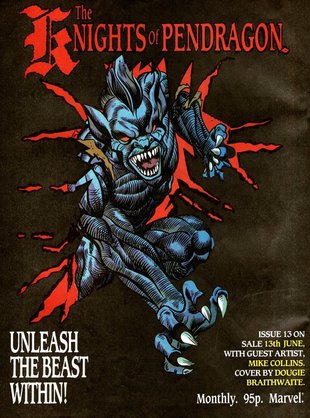 You wouldn't catch me doing cock gags.
AtoZ covers Darkwing, who is no doubt depressed he came after Dreadwind. Amazingly his profile claims he would have no known weaknesses if it weren’t for his partner holding him back. We all have that Dreadwind in our lives.

We’ve not had an advert for The Knights of Pendragon for ages, so I was mildly surprised to see the book is still going, with issue 13 promising to “Unleash the beast”. I mainly mention this tough as its guest artist is our old friend Mike Collins. The back cover advert sees our old friends the Fiendish Feet return for the first time in a good long while as well.

Simon Richardson of Leeds attempts to impress Blaster by being the oldest reader at 18, but gets slapped down when the Autobot reminds us of the 49 year old from issue 14. He also tells Stephen Flanagan of County Louth that Wreck-Gar has either gone back to Junk; bought some TVs from Rumbelows or been taken away by the men in white coats.

The New Combat Colin defeats the Hoppy Shopper, to reveal Madprof and his assistant Moptop within. But as he’s bouncing Madprof up and down, the bad egg wears off, restoring him to normal. Which is sadly too late, as the Gigglies have dumped him for The Amazing Dave and Moptop. Which seems a bit unfair on Semi-Automatic Steve. Still, the lesson is not “With great power comes great responsibility” but “You can’t pull the birds if you act like a lemon”. Amen brother.

Next week, you’ll be on the edge of your seat. 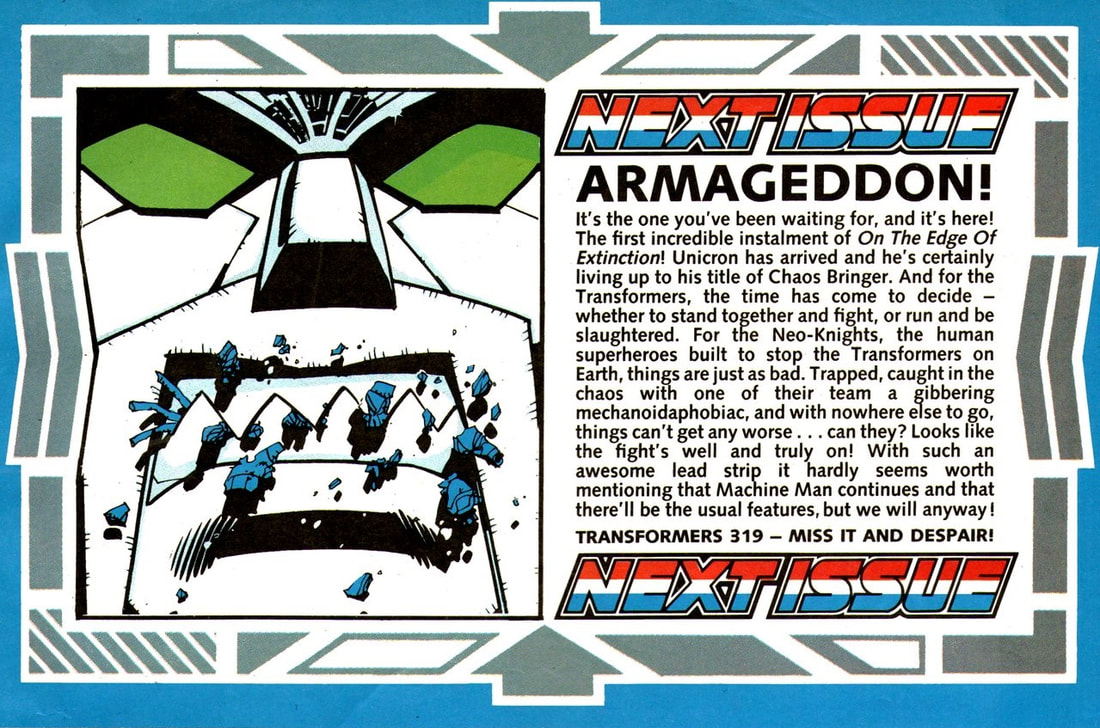 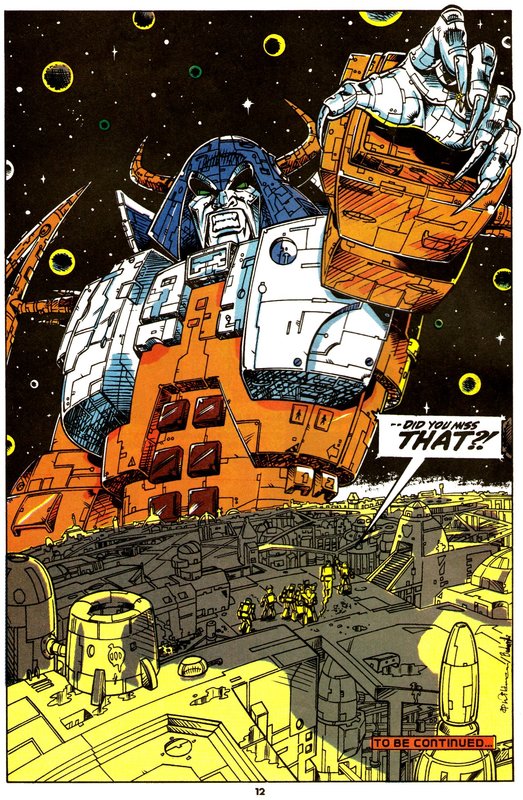