Some Love is Just a Lie of the Soul. 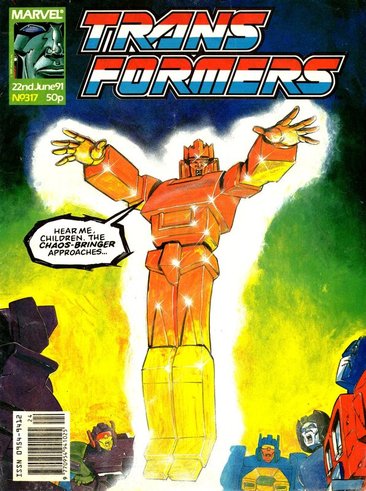 
Me not come halfway across galaxy from Hydrus 4 just to find one Transformer!


Behind an Andrew Wildman cover that feels like it should be called The Passion of the Xaaron, we get one of the best gags the UK comic ever did. The US version opens with a page of Unicron in his physical body floating through an empty white space. Or void if you will.

The UK extends this to two pages, making Transformation completely blank and empty bar a moved speech bubble and the copyright information. It’s an excellent visual, selling both the idea of the emptiness of the void before the Universe, but also instantly grabbing the readers attention. All in all, a very smart subversion.

This is all part of Xaaron Primus telling the creation of the Transformers and the history between himself and Unicron to his assembled children. This is of course the third time we’ve heard it now, but it’s a good time to recap it, especially for American readers who’ve had a longer gap since they last saw it. This helps firmly establish everything that needs to be kept in mind before things really kick-off in two issues time. Which is effectively what this story is, a last pause and gathering of thoughts prior to what was intended to be the conclusion to the series.

He's never been the same since he painted his head gold.
To keep things fresh, there are some new details in the origin as Furman continues to refine it. Now Unicron is the survivor of the Universe before this one, with our dimension being created by the last few crumbs he failed to eat. Primus meanwhile is the baby of the sentient core of the Universe, created solely to stop the Chaos Bringer. All of which still winds up in the same trapped in asteroids/making new bodies and children result we’ve seen before.

I suspect the thing people remember best about this issue is what follows the recap, a two page spread of the assembled Cybertronians listening to the speech. Wildman mainly works in storyboards these days, which is a different discipline requiring less detail that means that when he does return to comics his work tends to be sketchier and less detailed. Which is a shame as this shows him at his best, there’s just so much detail to unpick you could stare at it for minutes and not see everything. Apeface eating a banana is the most famous part of it, but you’ve also got Runabout fixing Runamuck (though he seems to have gotten a lot better very quickly than seems likely after last issue); Dreadwind and Darkwing sharing a joke; Shockwave needing some aspirin and Ravage being a good doggo. All this plus our first original Action Masters!

It’s an amazing bit of work that’s probably the peak of Wildman on the book, even if it doesn’t really advance the plot one bit.

What does, is Primus declaring Optimus Prime will lead the combined forces, and a shifty looking Autobot sneaking off. With Primus making speeches about grand sacrifices, Prime is worried about the fading absence of Xaaron in the merging. As Uraael pointed out in the comments last week, we’ve actually passed the last appearance of the Emirate in the series and what has replaced this long serving character is a lot more scary.

Back in Earth orbit, Grimlock has arrived on the Ark (and this separate group not being teleported with the rest suggests limits on Primus’ power) and is deeply annoyed there’s no one to show off his success to. The only Transformer life sign Snarl can find on Earth is oddly split in two (probably intended to be a reference to Fortress Maximus, though looming cancellation with retcon this somewhat), meaning that if Grimlock is going to be smug in Prime’s face, the place to go is probably Cybertron. And whoops! Grimlock’s hand just froze. 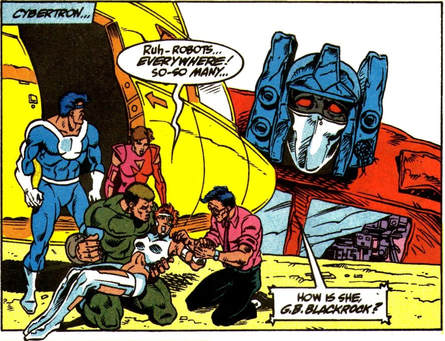 Careful with those hands Thunderpunch.
Which isn’t enough to stop him ordering Sludge and Slag pumping nucleon into the stasis booths full of deactivated Autobots without checking who is in them first. Meaning we’ll soon be seeing the return of Prowl, Wheeljack, Rachet (! The Universe hates him so much that even his headstone is spelt wrong) and... erm... Megatron.

Speaking of people doing a good job, remember the Neo Knights? Well, they’re on Cybertron as well, even though that plot really should have been left behind. Circuit Breaker has had a complete mental breakdown at the sight of so many robots, which is at least some good and rather tragic character work for the only one of them to contribute anything to what’s to come.

Which gives us the only low point in this issue, as Prime’s reasonable request to Primus to send the humans home is completely ignored we have Thunderpunch (looking like a shaved gorilla) laughing about how God doesn’t care for mere mortals, complete with “Ay”, because of course.

Luckily we end well, as shifty Autobot goes to an underground temple, puts on a Unicron hat and declares to his massive cult, “DEATH TO OPTIMUS PRIME!”

This is, the usual Neo Knights issues aside, a strong set up that gets ready to move everything into place for the end. Furman and Wildman are now so in sync that even the simplest pages sing with complete confidence in the material.

Don't have a Horribull man.
This is the last week of Transformers reprints till right at the end of the series, with the shortened length of the concluding Enemy Within! chapters meaning we get a full part to end on. For the bulk of what's to come, it's Machine Man once again.

With no real Transformation, it’s straight to AtoZ, covering our old friend Dreadwind. Who is the subject of a poem to Blaster from Chan Seng Boon of Georgetown, Malaysia demanding the Decepticon be given his page back.

We continue the trend of Super 90’s fan art as Philip Moran of Terenure Dublin sends in Blaster Simpson. Eat my short-wave indeed. The highlight this issue though is David Lawrence of Victoria Australia (the book is clearly still doing well all over the world) asking if there will ever be a real-life Transformers film. Blaster’s tongue in cheek casting ideas (Skullgrin: Richard Gere) actually comes pretty close to the mark with Bruce Willis as Kup, considering he did wind up doing G.I. Joe.

The New-Combat Colin has gotten himself a superhero costume and snubs both Steve and the Gigglies to go and see his agent, Roy L.T. Check for work. But because the Brits think superheroes are too daft, the best he can get is opening a supermarket. And his “Shop till you drop homeboys” patter does not impress the little old ladies. But can our new hero stop the Hoppy Shopper (a big bouncy foot basically) when it’s blocking his sun and he’s in dark glasses?

Next week, the final pieces are put in place for the grand climax. 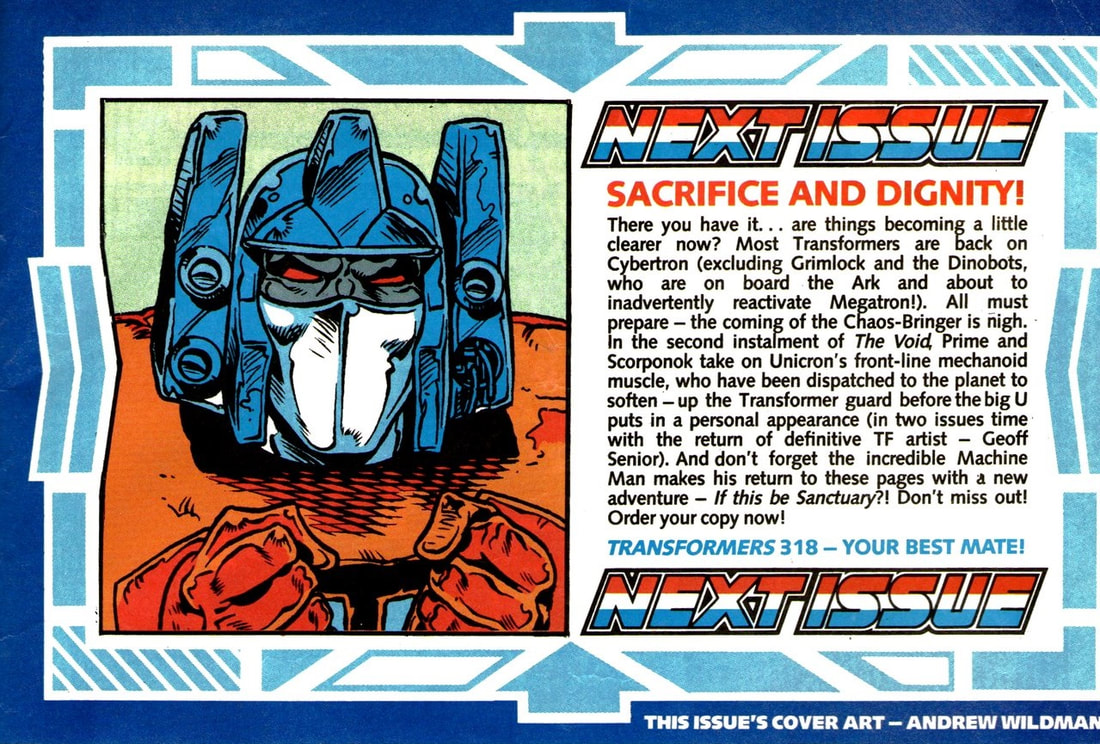 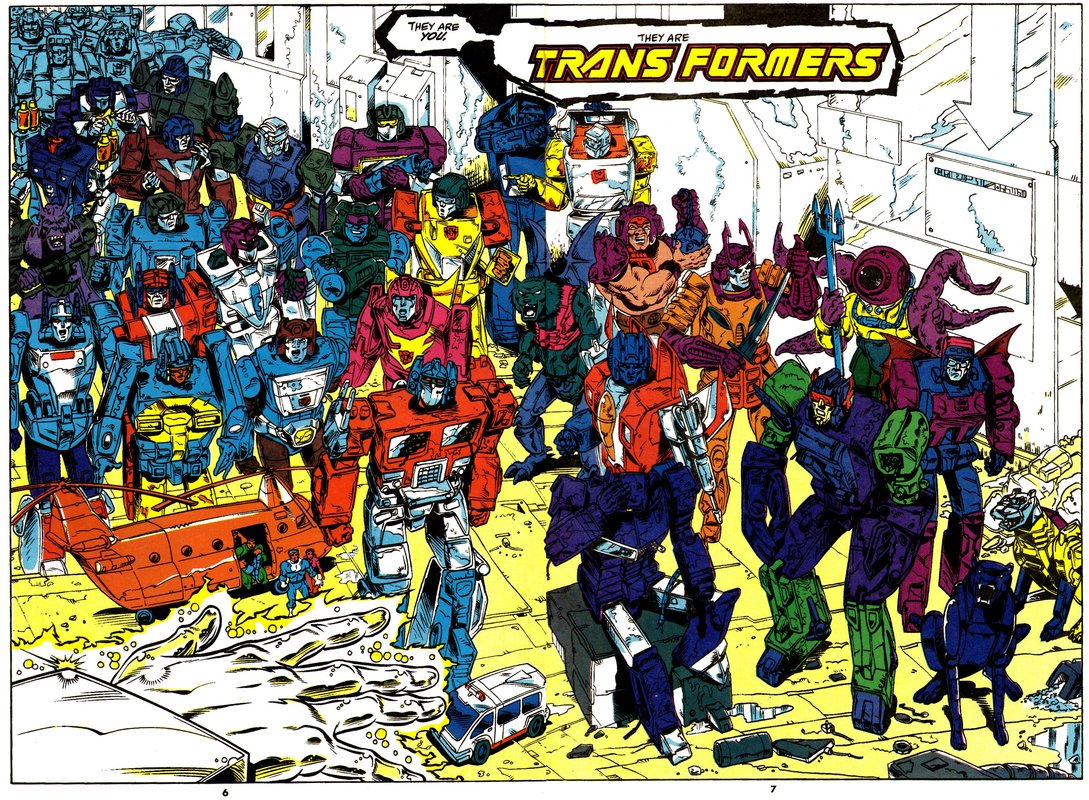