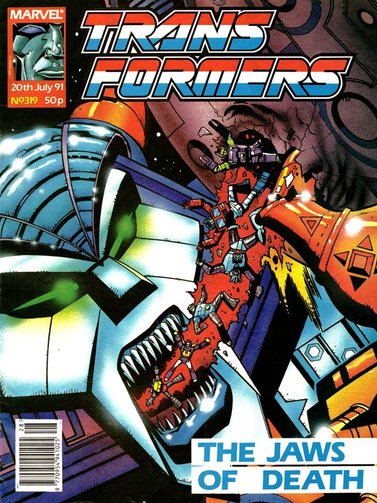 
So up pops the great-granddaddy of evil robots and what happens? You want out!


We’ll talk more about the end of the American series later in this piece, but the key thing to note as we open is that On the Edge of Extinction! was written on the assumption it would be the final issue and was intended to give a big finale to the series. For years I was confused by the American cover (which is recoloured and re-tag-lined here) claiming it was double sized for an anniversary. I’d assumed the extra length was simply to wrap things up and this a bit of spin to readers once it was clear there would be an issue 76. But I could never work out what the anniversary they were pretending to celebrate actually was.

So thanks to Chris McFeely, who was the first of a few people to answer the question when I posed it on Twitter last week. It turns out that at the time Marvel treated a 75th issue as a major event, akin to 50 or 100, and many other comics around this point celebrated with a double sized issue. So it seems this would always have been double length (and likely the pay-off to the Unicron plot-line), it was just a happy coincidence that it allowed Furman extra breathing space to close off the entire run.

For the British, it’s worth noting the American banner “They were the dream...” text has been retained once again (which hasn’t always been the case since the current version first made it over the Atlantic with The Eye of the Storm!), which is actually an important thing to do this time as it provides one of the bookends to the story. 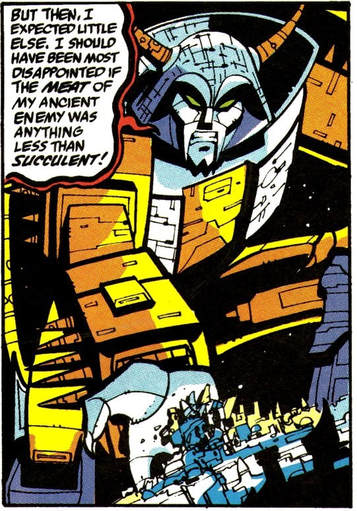 Dude likes his food like Orson Welles.
Said story is of course Furman’s equivalent of Dark Star, in theory a big celebration and conclusion to long running (and in this case all) storylines, but also about clearing the decks for new toys by killing all the old ones. Which seems rather mean spirited considering it wasn’t intended to be followed up on.

So we start with the Transformers on Cybertron reacting to the arrival of Unicron in the only sensible way: running away very fast. Which is hardly surprising when you turn the page and are faced with an amazing “Geoff Senior ain’t taking no shit” double spread of Unicron scooping a massive chunk of the planet surface off in his hand and shoving it in his face.

(OK, I’ll mention it here, once, that Unicron shrinks and grows throughout this story, as is often his way. But who cares?)

Way back in The Legacy of Unicron!, Furman worked harder than anyone has before or since to make Unicron a character rather than a plot device, and that continues here. Unicron doesn’t just eat a piece of Cybertron—complete with fan service of his digestion looking the same as the film—he enjoys it and is genuinely delighted that his old enemy tastes really really good.

Which gives us our first death. Indeed, the only death of a named character this issue. Even allowing for the fact countless numbers must be killed every time Unicron touches the planet, that feels rather tamer than I remembered it being. The casualty in question being Brainstorm. Which is one area this does feel very much like Dark Star, the death’s are of characters for whom it’s often a struggle to remember the last time they did anything.

The only time you see Optimus shit himself in the series.
Furman’s approach is different in one key way though. Budiansky tended to just have groups of characters roll up to get zapped by Starscream, often mutely and without a great deal of enthusiasm beyond a handful of featured deaths.

Furman on the other hand is going to structure it so that even so he could in theory have every death be exactly the same “Get stomped by Unicron”, there is going to be variety is both circumstances and character reaction. Not everyone is going to get something specifically meaty, but even the one who say nothing will be at least part of memorable imagery.

Iguanus, Cloudburst and Mindwipe (and it’s great throughout this how Autobot/Decepticon divides vanish in the face of this) turn to Brainstorm to ask the cleverest bot present how to deal with a planet sized robot. But the sheer scale has broken his mind, resulting in him ineffectually firing his gun repeatedly at the devil whilst saying a disjointed “no” over and over again (all credits to letterer Rick Parker, who does some top work throughout) before Unicron scoops him up on a fingernail and comments on how rubbish Primus’ children are.

Though they are tasty. Nom nom nom. Rather cruelly for poor old Brainstorm, the other three are shown jumping clear as he’s grabbed. I guess we now know Furman liked Iguanus more than Brainstorm.

In the face of this, it’s hardly surprising that Primus (suffering pain every time Unicron eats a bit of his main body) doesn’t do so well at rallying the troops. Even the normally indomitable Prime can’t get his head around how to fight something like that, just being left in terrified awe of what he’s seeing. 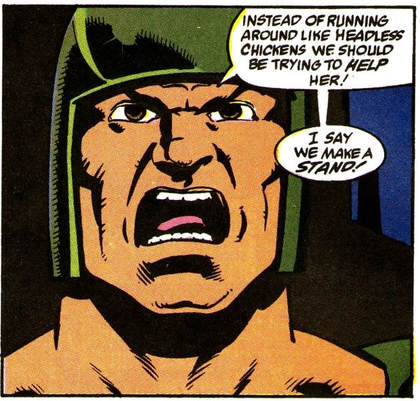 Make a stand under unicron's foot please.
A short distance away, Shockwave is doing slightly better despite his logic failing him as he suggests and Starscream agrees that they get the hell away from Cybertron.

Which brings us to the least interesting part of what is otherwise a masterpiece. The Neo Knights. Don’t get me wrong, we are building up to an excellent Circuit Breaker moment, but we don’t really need two and a half pages of her counterparts dragging her catatonic in the face of a planet of robots body around and arguing if they should fight Unicron or not. Thunderpunch shaming Blackrock for thinking they have no chance of doing anything against a guy who eats 50 foot robots just makes him look a dick.

Still, as the issue ends with Unicron, rather wonderfully, being pissed no one is fighting back and that this is too easy, we’re in an excellent position. There’s been an excellent balance of humour, drama, pathos and action that’s almost draining to read even at this early stage.

The closest thing to a complaint is that Senior uses the stock art of Cybertron a lot for distance shots, and it doesn’t really match his style at all. Especially as, for all the dust and smoke added, it’s obviously in good condition compared to what the story is saying is happening to it. I suppose you could also say that he wasn’t aware the Autobot Pretenders shouldn’t have their shells, but that’s minor stuff, especially as they need to be recognisable as they die (I managed to mistake a couple of the shell-less ones for Action Masters last week!).

Break it to us gently Jason!
Transformation is unsurprisingly excited for the big epic, but is also keen to push the poster we’ll be getting over the next three issues. Indeed, it’s so keen that both it and the Next Issue box claim it’s by Geoff Senior.

AtoZ covers Fangry, which very much reminds me how I had no idea what the fuck he was supposed to be when I was a kid, his furry alternate mode feeling more like a Pretender.

In a sign of continuity, Combat Colin is so depressed at being dumped last issue, that even stopping Mega-Man robbing a bank with his own giant magnet can’t cheer him up. Or rather it nearly does, until Steve suggests that he’s “Still attractive”, which kills his renewed good mood.

I’ve left Blaster till last this week as there’s a big important letter to deal with. Yes, Brian David Frame of Bonnyrigg becomes the person to finally ask why Xaaron has bars over his mouth. Turns out it’s a toast rack. Kristian Rozells of Warndon also gets us confirmation that Sockwave’s eye has many uses, including can opener and pencil sharpener.

The real big letter though is from Jason Wagner of Edinburgh. Which is yet another of the ever increasing number of letters from folk still involved in fandom today, showing how the readership has shrunk over the last few years to those in for the long haul. He has the great misfortune of being the person to drop the bombshell that the American comic is ending (indeed, had ended by this point, US 80 would have gone off-sale not long before this) and asks what will happen to the British. Blaster responds with some bluster, saying they have enough material to see out the year and they won’t stop “fighting till the fight is done”. Which will turn out to be the case. 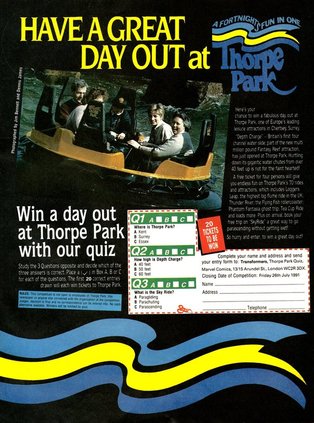 One what though?
Still, if you’re feeling down, there’s a competition for a day out at Thorpe Park. The slogan (and I’m guessing for the park generally as it’s part of the logo) for which is “A fortnight’s fun in one”. One what? You might assume day from the nature of the competition, but it’s vague enough to be worrying.


Next week, a lot of characters are going to need a fortnight’s fun in one. 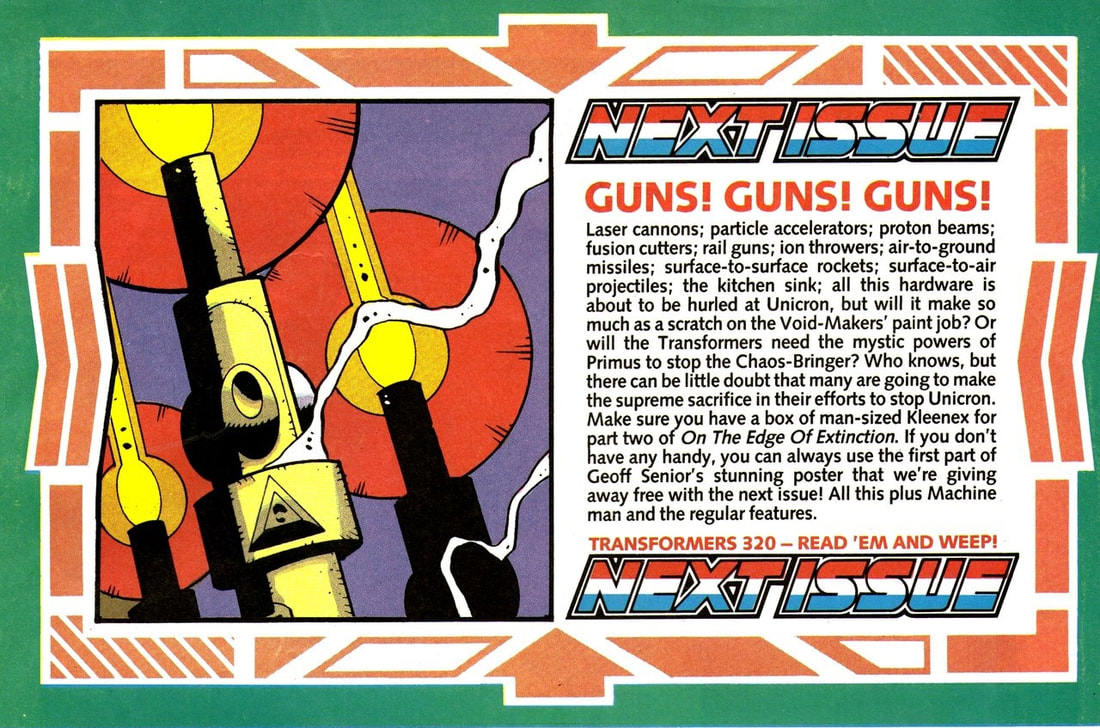 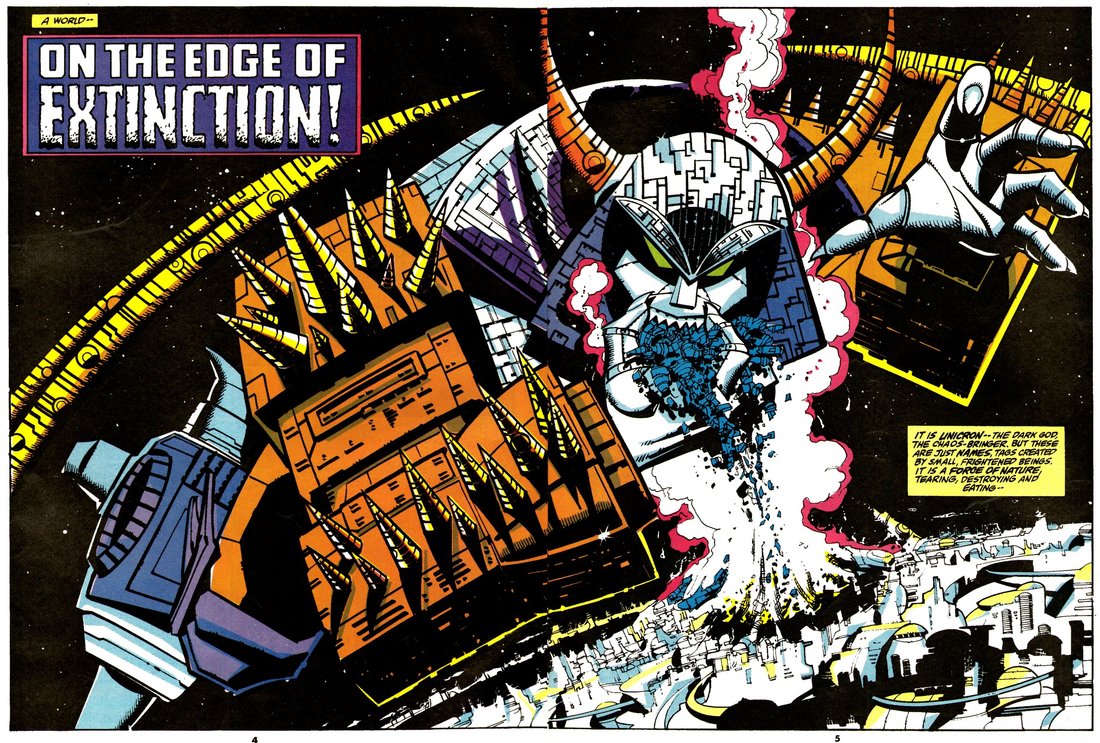