To Fight for the Right, Without Question or Pause, to be Willing to March into Hell for a Heavenly Cause. 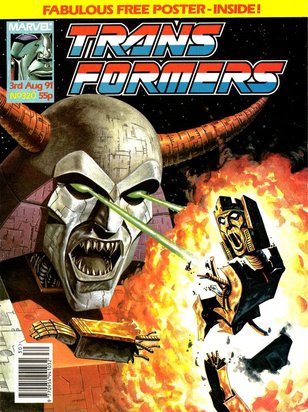 
I always wondered why they call you Harhead. Now I—”


After a period of some restraint, we’re now back into the covers giving away spoilers for the contents, as Xaaron’s rather brutal (much more so than in the comic itself) death is front and centre in an amazing painted effort from Staz. Though it loses some of its impact when you notice that Xaaron is both wearing black eyeliner and is doing a Kenneth Williams impression as he dies.

The second part of the Unicron finale shows that this will split itself fairly neatly into four parts (though we don’t quite hit the best place to end on), with this segment following on from the utter hopelessness in the Transformers being turned around by (not entirely selfless) acts of sacrifice from two characters.

The first is our cover star, as Unicron’s despair at no one fighting back is interrupted by a searing pain. No, not indigestion, but by Primus /Xaaron floating up and using his mojo to inflict pain and even energy ropes to tie up his arch-foe. 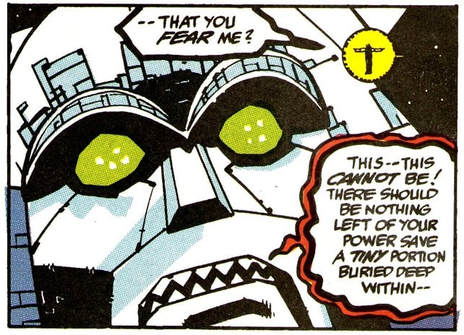 Unicron, genuinely, if briefly, crapping himself.
The interesting thing here is that, as Primus points out rather too smugly (and it also covers the plot point of how Unicron got so close to Cybertron without being sensed, he shut down his mind for the last part of the journey), Unicron is genuinely scared.

But only briefly as he realises most of Primus died with Thunderwing (in issue 66 apparently thanks to some sloppy editing of the US material) and this is just the last, desperate bluff of a being with no real power. So he frees his bonds and kills God.

Which doesn’t happen in most comics.

Interestingly, watching from below, it’s Scorponok who calls out Xaaron’s name and Prime who shouts for Primus, you’d expect it to be the other way round considering Prime is Xaaron’s friend and he was already worried about his loss in the previous story. I’ve often wondered if the speech bubbles were the wrong way round, or if Furman was subverting our expectations.

What is an error though is that (much like the opening page) the colours are off, looking faded and lighter than usual. Which is presumably a fault carried over from the American issue as the Titan reprint also had it.

The important thing though is that Xaaron is dead. As I said five years ago when he was introduced, he’s the only Autobot created for the comic who wasn’t made to die. Instead, he not only lived, but thrived and transferred across the Atlantic. More than Impactor or Death’s Head he really is the lasting legacy of Marvel UK and it’s a shame to see him go. 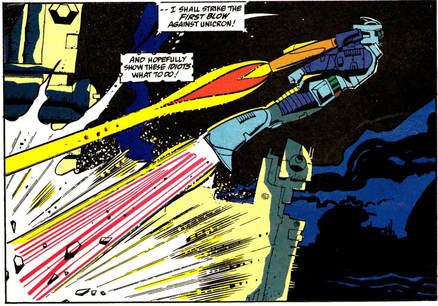 The Danny Dyer of Cybertron.
Our second hero coming forward to make a stand is more unexpected, being Galvatron. Who has no interest in the Transformers or their planet (which not only makes it sound as if he regards himself as a separate species, but is different from all the other Galvatron’s for whom ruling the planet was their ultimate goal), but does want revenge on Unicron. As such, the total failure of the fight back so far has him shout “Curses!” like he’s Uma Thurman in Batman and Robin.

So to try and persuade the local idiots to fight, he fuels up with energy from Cybertron itself and blasts off in to space to make a gesture by shooting Unicron in the face. Which gets him casually swatted aside so hard he’s flung through a building.

Which would have been the end of him if this had been the final story, and it’s a pretty strong exit for one of the books most enduring villains.

Primus and Galvatron may not have had much personal luck, but their attempts to inspire others does work as Optimus (citing Xaaron over Primus this time) and Scorponok (claiming not to know who Galvatron is in what is surprisingly the only time anyone flat out states he’s not a known villain. Shame the UK team didn’t alter the panel. Though you can say Galvatron was too far away, or that Scorpy is still sore about Time Wars), now lead a counter attack. Including massive, massive guns. Even Dreadwind and Darkwing join in.

Which gives us the moment for a comedy beat as Nightbeat and Siren and riding on SPACE scooters (if only they had car modes, hey?), with Siren being so fast and eager over Nightbeat’s advice that he smashes right into Jazz. Which makes Nightbeat glad Siren is one of a kind, until Hot Rod does something similar, making his just annoyed at youth. 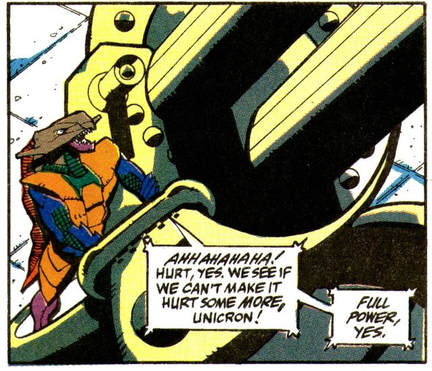 Picked this image entirely because where else are you going to see Finback owning it?
Which is, I think, our last major Nightbeat moment. But at least he gets out the story alive when many of he contemporary toys (bye Hosehead!) won’t.

The issue closes out on more named character death. The aerial troops are doing hit and run attacks on Unicron, but Highbrow is so scared of running (“this time”, a shame he’s getting character development right at the end building on things we’ve never seen) he fails to notice he cuts up Cloudburst, forcing the Pretender into Unicron’s acid breath. Which so outrages Highrbow at what he’s done he ignores Darkwing’s advice about the key part of a hit and run raid and gets crushed in Unicron’s hands. Which is a rather dark, depressing way for the guy who stole Scorponok’s head to go.

Luckily, the mood is lightened by some comedy deaths. First Finback is having such a great time firing the big planetary defence guns, he fails to heed Missfire’s warning that the power core is overheating and the whole thing explodes (Misfire looks to survive though, even with classic Senior shattered optics).

My favourite though is Hardhead and Bomb Burst pushing out a big missile launcher in a visual nod to Springer doing the same in the‘'86 film. Bomb Burst’s response to being told to push is the line I opened with, and Hardhead adds the shocked “NO!” to complete the quote as they see Unicron’s foot about to stomp on them. And if the issue ended with it landing, it would be a perfect conclusion. But it still comes pretty close.

Furman keeps things moving and fresh here, showing how this isn’t going to be a repetitive death-fest. Without the Neo Knights drag factor this is even better than the opening, an absolute masterpiece. 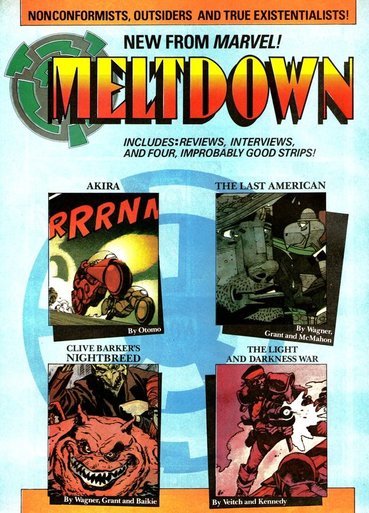 It's no Galaxy Rangers.
Things are changing at Marvel UK, and I suspect we’re now into Paul Neary’s reign as editor in chief. Transformation’s sidebar and two adverts (one for each book, though the Havoc one is misprinted to make everyone sickly green) are given over the launch of two new Marvel anthology comics.

The first is Meltdown, a monthly containing Akira (apparently at six pages a month it still wouldn’t have reached the end even by 2018); The Last American; Clive Barker’s Nightbreed and The Light and Darkness War.

The second, weekly and slightly younger aimed, is the aforementioned Havoc, with Robocop (with “Ex-Transformers artist Lee Sullivan” being emphasised); Ghost Rider; Star Slammers and Conan.

This attempt at a broader and darker duo of comics is a sign of the new direction Marvel UK is about to take that will move away from licensed titles and embrace the 90’s aesthetic in another attempt to open up the American market. It’s a change that will leave the previous reliance on toy and TV books behind, and marks the point Transformers days really are numbered.

AtoZ covers Squeezeplay, and it’s easy to forget the American version’s personality doesn’t include succumbing to Stockholm Syndrome after being tied up by a schoolgirl.

Martin Jones of Middlesex follows up on Blaster mentioning Cybertron football teams by sending in a drawing of Throttlebot Wanders. Who could easily beat the Germans amiright?

Four year old Michael Carlin of Perth has his dad write in to ask about holidays to Cybertron, but as none of the space tourist agencies have offices on Earth, he’ll have to make do with Blaster’s assurance that they do sell Transformers in Portugal. 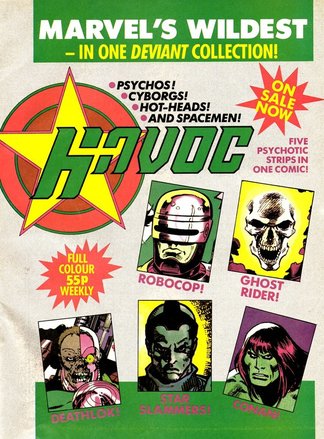 Get these guys to a doctor, Ghost Rider is the only one who looks healthy.
A drawing of Optimus Crime (half Autobot, half stripy top and swag bag carrying human) from Jude Bowyer of Southgate is like one of my puns brought to life.

Another familiar name from modern fandom appears as Matt Dallas of Kent is the second person to ask about a second film. The fact this has happened so much lately suggests the original has really bedded in as a rental classic now, seen by the majority of the target audience that missed it on release. Blaster suggests Dallas should be in movies himself with a name like that (amusingly he does amateur dramatics now, did Blaster plant the seed of that path?), and suggests Brando is down for Unicron (a big fat old ham long past his best? Perfect) and Billy Idol will be Galvatron, before admitting he’s joking.

The first third of the three poster (with no mention of artist this issue, leaving no chance to correct the mistake of last week) gives away the return of Prowl an issue early, showing him Nightbeat and Fangry manning a massive massive gun of the sort that has a tendency to explode. It’s also bloody massive, so all together it’s going to be a big beasty.

The Defeat of Combat Colin! sees a still depressed Col decide that the Giggley’s dumped him after The Amazing Dave hypnotised them. Which they refute, comparing their previous love for our heroes to the steam from a boil in the bag curry. And apparently they’re not as raunchy as Dave and Moptop are. Which may be the filthiest comment every slipped into the comic.

Though as Colin leaves in utter despair, it turns out they’re in league with Madprof... and all working for Mutant Master, who plans to break Colin completely!

Next week, many more characters are going to be broken completely. 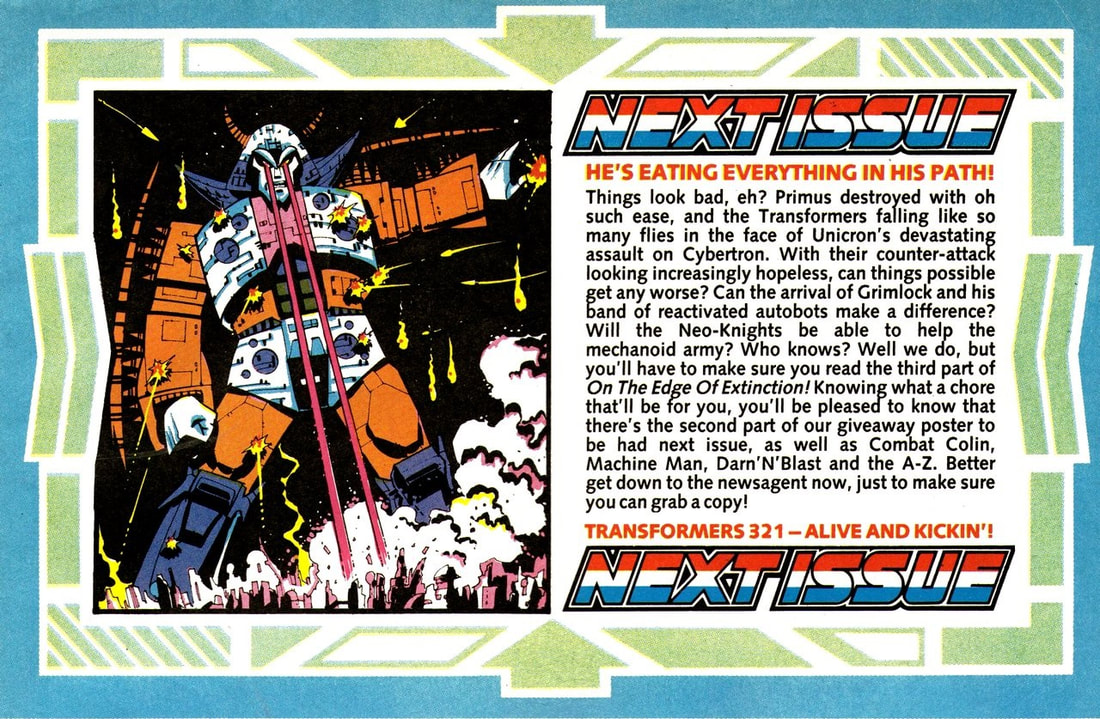 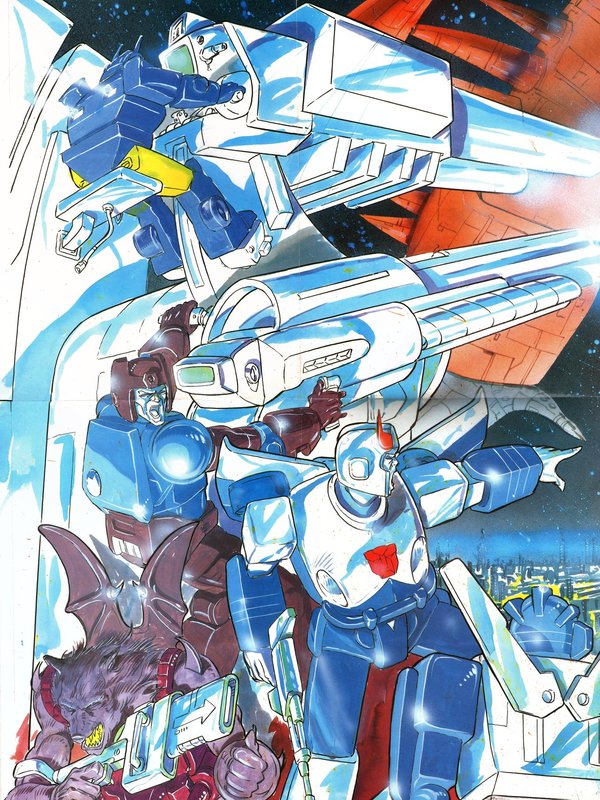