And I Know, If I’ll Only be True to This Glorious Quest, That My Heart Will Lie Peaceful and Calm When I’m Laid to My Rest. 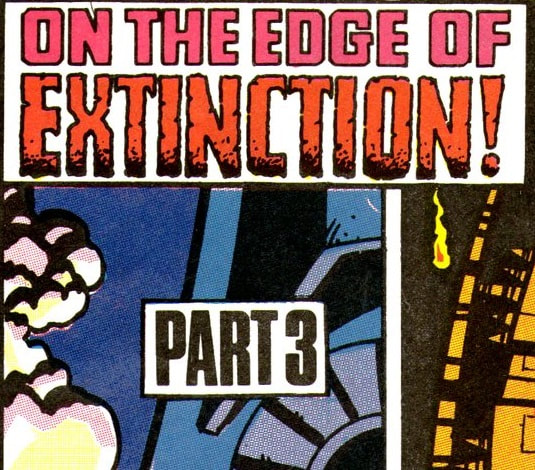 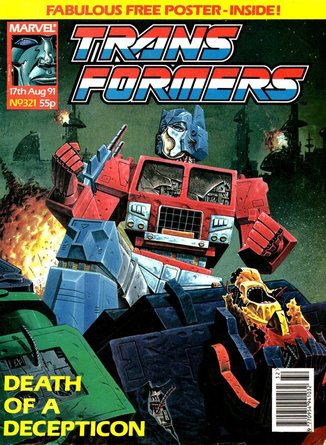 
Yes old friend, you did good.


I’m pretty sure at this point Staz doesn’t actually care if people are buying the comic as he, once again, does an amazing painted cover showing the tragedy of Scorponok’s death in all it’s morbid and grizzly glory. But which completely blows the key moment of this issue.

We open though, with unfinished business from the second part, a Unicron finishes putting his foot down on Hardhead and Bomb Burst. Prime, fighting back pain he’s willing for a “Friend” to hold on against for just a little longer and therefore perhaps not thinking straight, decides it’s a good idea to send Waverider, Quake and Joyride to shoot at the foot.

Which only has the effect of making Unicorn (who’s really enjoying the fight back) deliver a literal sick burn, as he simply goes “ouch” as he fries the three Transformers with his eye lasers. Amazingly though, Quake will get better from this. 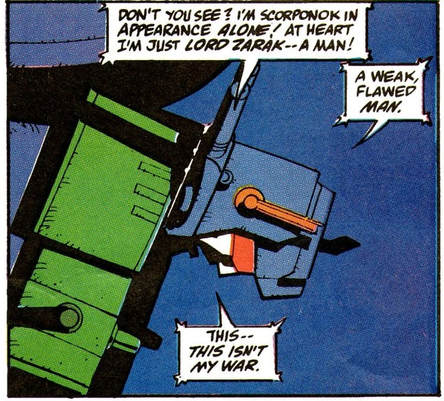 "I mean, there was that time I sent Skullgrin on a mission because I thought he wouldn't stand out. Who trusts me with anything?"
This is all merely to get us to the heart of the issue though, as Prime is blown back (doing a 360 loop in the process in a panel that’s a parallel to Galvatron being knocked back last issue), landing at Scorponok’s feet. Or rather Zarak, the fearsome Decepticon is not at home (or equally scared) and the Nebulon is terrified at the fact even Optimus Prime has fallen. Which makes Prime passing control of their troops to him before being out for the count all the more bowel loosening.

So as when Optimus was faced with the cult three issues ago, Scorponok has the overwhelming desire to run. And with even more reason to do so, he’s just a flesh and blood man who has no place in this war. This is a path he came down from wanting to get rid of the robots on his own planet, not take command of them in a doomed fight.

But—and he makes this decision as bits of dead Transformer are raining down on him—he will not run. He’s not just a head on shoulders, when he bonded he became Scorponok and can do no less than the real one would. And so he runs headlong into battle, shouting “Unicron, I'm coming for you!" as he does so.

It’s a stunning, character filled couple of pages as Zarak argues with himself, going from defeat to defiance in some of Senior’s best, small scale, work. And it raises some potentially interesting questions about why the Headmaster process has wound up different here compared to other Transformers. After years of mad schemes it seems the Decepticon has finally been killed by the man he bonded with. Would that have happened eventually to all the Headmasters if they didn’t mostly die here? Or did that Underbase energy two years ago have strange side-effects? 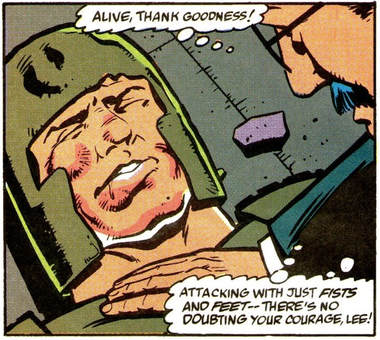 How did the front of his face get bruised anyway? Did he try head-butting Unicron?
Of course, the one thing he doesn’t do is what Prime asked, but it’s still a hell of a moment.

Unfortunately this gets followed up by some silliness with the Neo Knights as we see their attempts to fight Unicron... Well, that is to say we see the aftermath of Thunderpunch’s attempt because of course there’s no way you could actually show him trying to kick the Chaos Bringer without it resulting in his rapid death, so instead you get him falling to the ground and Blackrock lying and saying how brave he is. Still think it was a good idea Lee?

Dynamo can’t actually use the energy of Cybertron and Rapture can only make Unicron feel good for a second (though that’s still impressive), leaving it to Blackrock to decide that even a big robot has circuits (suggesting he wasn’t listening to the lecture from Primus about how Unicron is a god in a metal body rather than a robot), and decides the best thing to do is to slap Circuit Breaker about and tell her the robots are laughing at her. But he feels bad about it. Poor guy.

Back to the good stuff, and Scorponok is making what he must know is a futile gesture, but a genuinely brave (unlike Thunderpunch just being an idiot) gesture none the less. Standing on Unicron’s foot, he’s ripping and tearing at metal whilst shouting his defiance. Which simply gets a mildly annoyed “BURN!” and the fire breath, giving us the nasty image of Scorponok melting in fire.

It’s not all going Unicron’s way though as a spaceship then slaps him in the face. It’s the Ark, and in our one bit of comic relief this issue, aboard are Grimlock, the Dinobots and the revived Action Masters who will be replacing the toys killed off in this story. Though for fun, the group shown is actually comprised more of Earthforce guys, with Skids being especially notable as out of place amongst the new toy push. 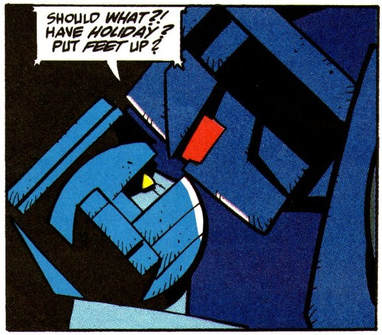 Not a bad idea.
Setting up their relationship for the future (or re-establishing it for British readers as it’s also taken from Earthforce), Prowl immediately tells Grimlock he’s an idiot for totalling the Ark and has no sense of how to make a plan. Grimlock responds by saying Prowl has always been above himself and isn’t a leader but a soldier, “So go fight!”. Which is accompanied by him throwing Prowl out the Ark.

Wheeljack’s worry is they were dead earlier today and maybe should take a moment. But Grimlock isn’t having that either, no time for a holiday or to put feet up, time to quote the film and kick Unicron’s... tail (guess you can show a lead character melting, but saying “Butt” is wrong). As Wheeljack himself is thrown out the Ark, he wonders if perhaps deactivation was better. Now that’s how you do a comedy interlude.

What really surprises me though is that the issues iconic moment, the one immortalised by the cover, lasts less than half a page. The just about recovered Prime kneeling over Scorponok, offering the dying Nebulon one last moment of comfort as he answers the question “Did...KUUU...I do...good?” with a simple “Yes old friend, you did good”. It’s one of the greatest moments of genuine emotion in the whole series and all done in four panels. The final of which, Prime in silhouette with head bowed low over the body, is especially striking.

And just imagine looking at this and thinking that Scorponok was a lose end that needed revisiting for ReGeneration One. 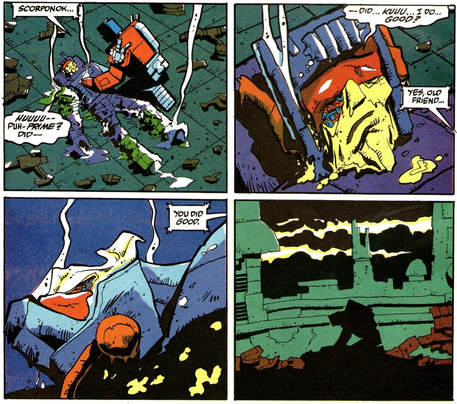 Sniff.
It’s actually easy to forget that Scorponok has the longest uninterrupted run as Decepticon leader of anyone in the comic at four years in charge of his group. He’s suffered from very inconsistent writing, veering between the noble if misguided Nebulon and “I’m mad me” nutter (sadly that being the one that would return for Reg). But at his best, he’s been a great character with more depth than any of his counterparts, and he’s one that is going to be missed.

We then end on another strong cliff-hanger, as Prime continues to battle with his internal pain as he attempts to rally round in the face of reinforcements (misquoting the film again, Unicron must be stopped, whatever the cost!)... only for the dark Matrix to arrive and blast Unicron aside!

Despite ending in the middle of a sentence again, it’s a striking image, and the increase in threat here was nicely set up earlier in the story when Unicron himself said that Primus was no danger now his life-force is gone.

And not to continually dig in at Reg, but contrast how Thunderwing has been treated so far compared to Galvatron in that series. Here we saw Thunderwing awaken, then set off, and now arrive. As opposed to Galvatron setting off from Earth, and then the series constantly cutting back to him on his journey even when he’s not doing anything. This is much more concise and to the point and far less padded.

Even with the Neo Knights, this has arguably the most iconic moment in the story and balances the humour and the heartbreak perfectly, with artist and writer on fine form. 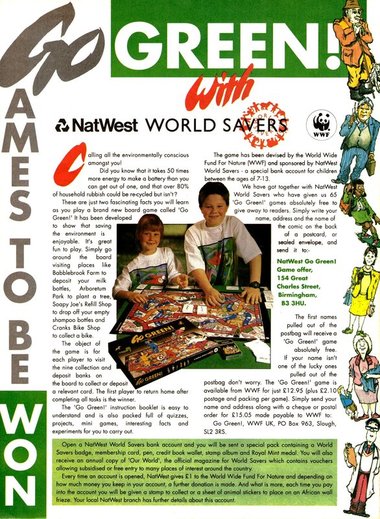 Recycle and bank with NatWest to save the planet.
Transformation is an odd one, in that it describes the entire plot except the key moment that’s still spoilt by the cover. The sidebar meanwhile is keen to promote what will turn out to be the final Annual, even telling kids not to wait till Christmas, but to get it now. Which is a little unfair considering the one new story (which it says the relevance of which will only become clear later) is set after the series finishes.

AtoZ covers Siren, and reminds us that he would have no known weaknesses if he wasn’t partnered with a librarian who hates loud noises.

There’s two write-in offers this week. The first is in association with NatWest and the WWF for the Go Green board game that teaches kids about recycling. 65 will be given away free to the first names pulled out of a hat.

The second is for a ritzy Robinsons radio, that is to say a FM radio in the shape of a Robinsons fruit carton. 50 to the first people to write in.

Blaster gets another downer letter, this from C. Smith of Kings Langsley writes in to ask about the end of the toy-line in America and what effect that will have on the British. The Autobot assures him that, though the American range is ending, Hasbro UK have plans for another four years, so as to give Nick Roche and James Roberts their careers.

Paul Martin of Edwardston South Australia is assured he’s not the only person from Down Under to write in, even if they’re not often published. But it’s a throwaway use of Grimlock becoming leader as the “Make Mine Marvel” that makes Blaster break down in hysterics for some reason. 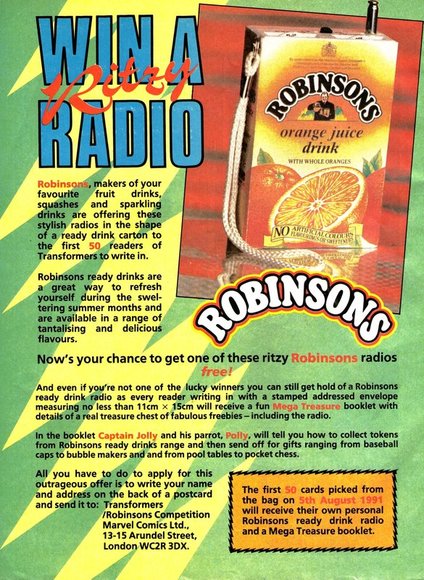 Maybe they just sent them a carton?
This issue’s fan art that’s based around a pun I would come up with is Octopus Prime by Patrick McCay from Derry.

The Defeat of Combat Colin continues as Col, with a “Face as long as a fiddle”, can’t walk the streets without being mocked by every passer by for being dumped. Worse, he’s tricked into thinking the Gigglies are under attack from a dragon, so when he makes a tit of himself trying to rescue them, he throws down his bobble hat and quits as Combat Colin! Is this the end for our hero? Find out next issue!

The second part of the poster shows Unicrion in all his threatening majesty. Amusing with Xaaron facing off against him, little knowing how badly it was about to go.

Next week (on Thursday as I’m at the Trump protest in Friday), it’s of course the end of the Unicron arc. With the Next Week box playing things so close to its chest, art from this issue is used to represent it. Who will leave alive?

Also, I’m now in Instagram as (amazingly) inflatable_dalek. Check it out for my cat pics and (the plan at the moment) glimpses of my read through of the comic each week in real time. 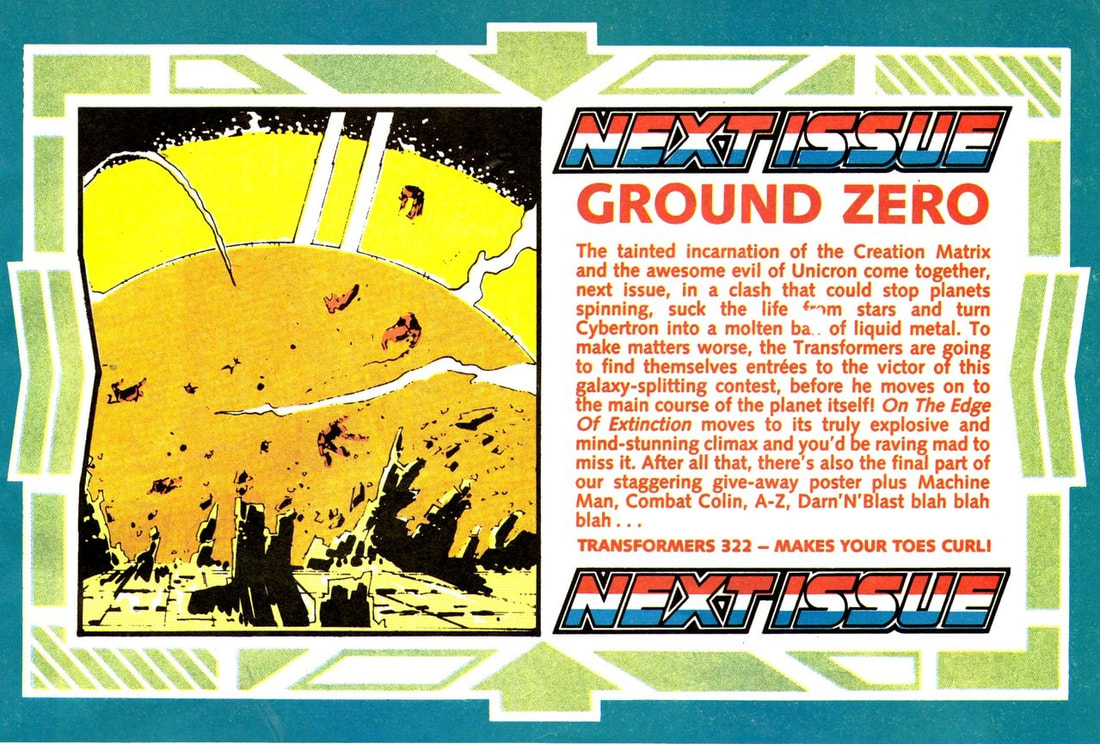 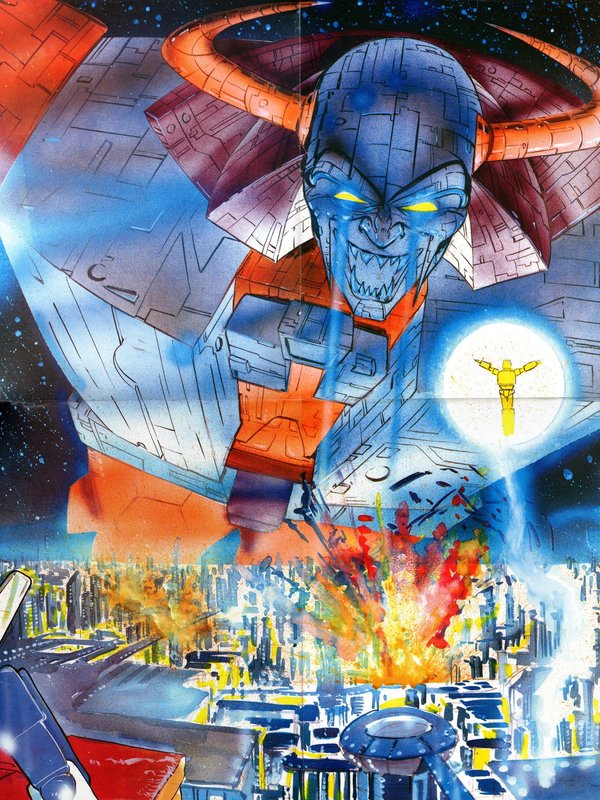