And the World Will Be Better For This, That One Man, Scorned and Covered With Scars, Still Strove With His Last Ounce of Courage, to Reach the Unreachable Stars! 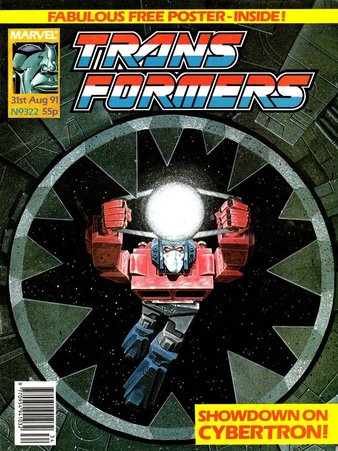 
But life goes on, and the story of the Transformers is far from told!


Staz gives us what I believe is his last cover for the series (and our last painted one as well), and he goes out with another stunning image that totally ruins a key moment. Never change Stew.

The story itself is presented in rather a different context in the UK to the US. There, it had a real chance of being the final ever issue, with the final page being a “Just in case” thing that could either be added or removed depending on if this was the case or not. The UK team on the other hand, knew this was not the case and exactly how much longer they have left to go.

One notable final thing we do get though is the last change to the text by editorial. As I noted last issue, it ended mid-sentence for Prime. In order to make for a cleaner start, his concluding paragraph establishing Thunderwing is still at the heart of the Matrix creature is removed. 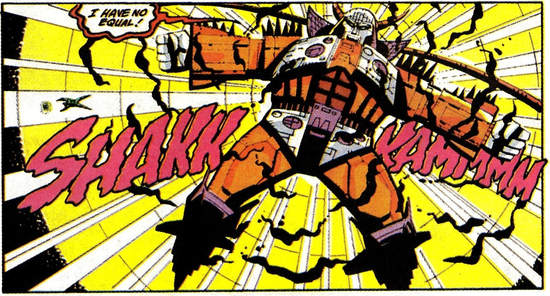 Be the Unicron you deserve to be in life.
What is left in is Unicron’s genuine shock that he didn’t know the Matrix was still alive, plus Prime’s realisation that if the Matrix does win its fight against the Chaos Bringer the Transformers are still buggered and will just have to carry on fighting it.

The Matrix isn’t actually that bothered about Unicron, it just wants him out of the way so it can have its revenge. Unfortunately it makes a big deal of how much it has changed and is no longer the entity Unicron knew... Which clues him in that what threatened him is dead with only evil left, and in that realm “I HAVE NO EQUAL!”, sending out a massive wave of energy that destroys the creature, lots of Transformers (including what looks like Mindwipe) and breaking up what’s left of Thunderwing.

Which is not a bad way of stroking your own ego.

The Matrix itself is still there though, and Prime is determined to reach it and unleash the goodness he knows is still there (and thankfully the editorial team put the right “See issue” box in). But first he sets HiQ free, making it clear what the source of his recent pain has been. It’s interesting that, with the book almost certainly cancelled, Furman left this in when it adds nothing and could easily have been said to happen off-page if there had been an issue 76 (as there was). Though Prime making sure the Nebulon lives is very much in character. 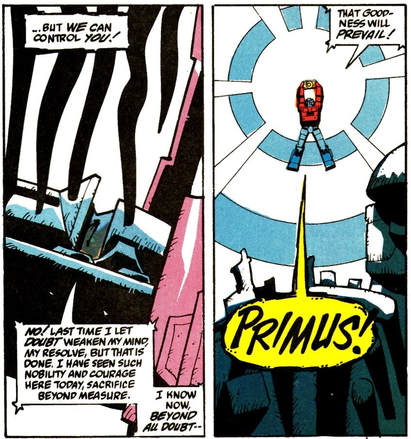 So what does Eugenesis know?
At this point Unicron decides he’s had enough fun and moves in to eat, with another nice character moment of him telling the Transformers he envies them. But, after transforming and just beginning to suck up the surface, he is suddenly struck with pain. Yes, it turns out Blackrock has successfully broken Josie, convincing her all the robots are laughing at her and making her channel all her energy at Unicron.

But boy is what follows amazing. HiQ tries to persuade Prime to take him with him for power, leading to the killer line “Go, live your life. I have enough for what remains to be done”. Which then leads to another great moment as, when wrestling with the Matrix both physically and philosophically, he rejects its claims of him being weak and declares whatever doubts he had before have been vanquished by the nobility and sacrifice he has seen today. He knows goodness will prevail. And through sheer force of will he purges the Matrix.

Pretty much every take on Optimus Prime in comics after this will treat him as the doubt filled tormented character Furman has toyed with in the last few years. But here, at the end, the Marvel version defeats Unicron by being too pure for this world.

The pudding is however slightly over egged as Prime flies towards Unicron, with him giving a lengthy speech to Primus (who really died two issues ago) about how he now realises that Primus created the Transformers to outlast him, and so the last bit of their God must be put down with the devil. He does all this in space no less, which the comics have always carefully portrayed as having no sound (including for the explosion on the following page). Unicron you can at least assume talks telepathically as everyone on the planet seems able to hear him no matter where they are, Prime on the other hand can monologue in a vacuum. 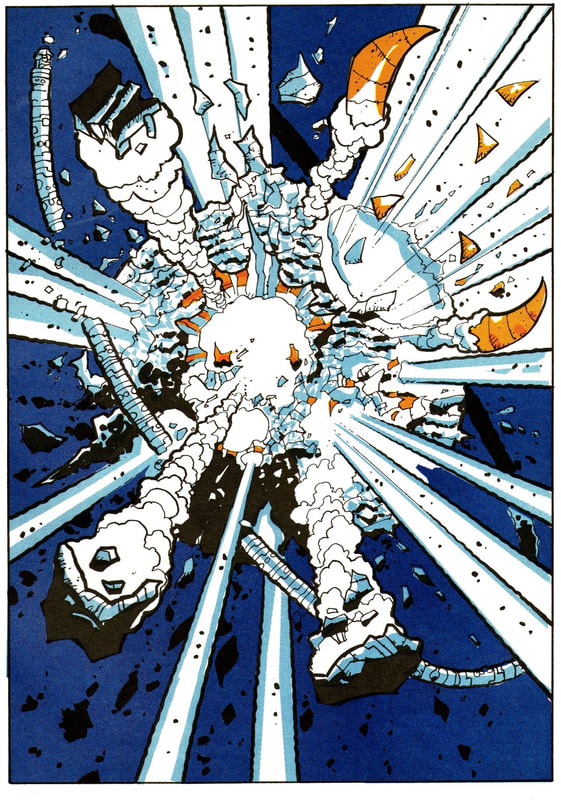 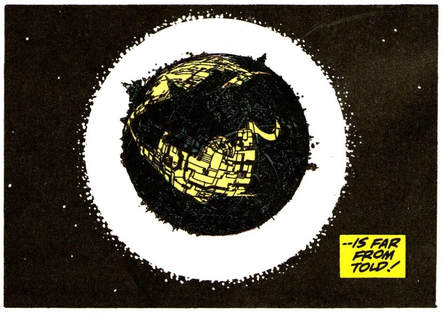 And so it came to be.
Unicron is now over his Circuit Breaker attack, but barely has chance to swear revenge before he sees the Matrix coming for him. As Prime flies into his maw, we get an interesting take on why it’s so dangerous for him, as it fills him with purity, light and goodness and he can’t take it till he explodes.


Giving us the intended final page of the whole series. The debris from Unicron rains down on Cybertron, with the remaining Transformers (we see Nightbeat, Kup, Prowl, Grimlock, Fangry and Weirdwolf) watching the heavens. As mentioned, the narration intentionally mirrors that of the opening text (“They were the dream...”), making it clear that the battle may be over, but the story of the Transformers is far from told. Which of course riffs on the UK closing line to the ’86 film, though most of the American audience wouldn’t have known that. We then close on that same stock shot of Cybertron that will also be used as the actual last panel of the series.


But Furman is more than crazy prepared for any eventuality. The story had one extra page made for it that would simply be left out if this was indeed the end (and indeed, it’s not included in Titan’s Best of Transformers collection). And much to everyone’s surprise, this Prologue was indeed needed. It’s a simple page, but it sets up a key theme of the remaining issues—Battletrap and Runabout talking about how they were hoping to feel more at peace now its all over, but all they want to do is go kill something—and also the direct threat of the next story as mysterious unseen monsters grab both of them as HiQ watches. It’s perfunctory, but it does the job of making sure this is very obviously not The End after all. 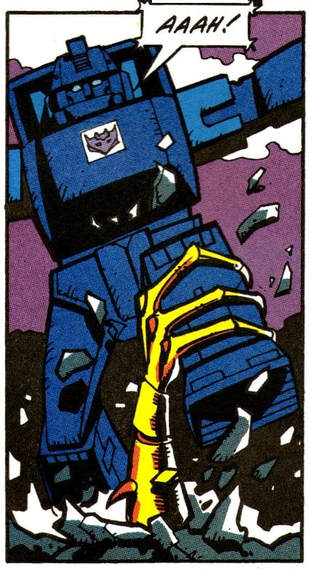 But... It never ends!
This has been, Neo Knights aside, an amazing story with almost every moment perfectly judged, ending with a genuine emotional impact from Prime’s sacrifice. If this had been the end, it would have been perfect. The fact it’s not is actually to our advantage though, as we’ll discuss next issue.

This is also our farewell to Geoff Senior on the original book. What else can you say about the legend? Transformers was lucky enough to have many amazing artists work on it, but Senior was on a level akin to seeing Usain Bolt just stroll past even the best runners in the world. He should have gone on to be Dave Gibbons on acid. The fact he went off into advertising is one of the great losses of modern comics.

Transformation gives its sidebar to a single image, headlined: All New! All Action! All Freelancing Peace-Keeping Agent! Coming Soon Death’s Head. It’s the iconic image of Death’s Head II holding the, well, head of the version we all know and love. But the wording being so vague as to make it sound like a comic about the original character is either an attempt to preserve the surprise of what happens to him (which is therefore ruined by the art), or shows a lack of faith in Paul Neary’s first great new idea.

However, I will say Neary was objectively right when he came into Marvel UK, looked at what was planned and decided it was too much of a clique and needed shaking up. A Doctor Who/Doctor Strange crossover when Who was dead on the vine and its own magazine was struggling to keep going? Madness. Launching the new attempt to capture the American market with Death’s Head, a character that failed to succeed last time they tried it? Daft.

Chucking all those ideas out and starting afresh was entirely sensible. The reason history has judged him badly is all his new ideas were much, much worse and, though a success in the short term, wind up killing Marvel UK. But more on this as more on this new Death’s Head is revealed in the coming weeks.

Blaster is all about the movies this week, as both Thurston Shaylor (“Great name”) of East Sussex and Colin Walsh of Dublin provide their ideas. Thurston is all about the technique, suggesting the robots be achieved by actors in plastic costumes, which gets a Blue Peter gag from Blaster. Colin meanwhile has a list of actors, including MC Hammer for Blaster and any fat bloke for Unicron. He suggestion of Leonard Nimoy for “Spockwave” is great though.

The current advert for The Complete Spider-Man promises a Todd McFarlane poster, which may be the first time Marvel UK have made such a fuss of an artist.

AtoZ covers Kup, who feels a bit out of place amidst the more recent characters we’ve been getting, and his Universe remains rather weak in comparison to the usual standard.

Machine Man 2020 gets a mention this week as the UK team leave a “See Issue” box unchanged from the original Transformers printing, meaning it doesn’t reflect either the current issue or how it was originally published. Impressive.

Combat Colin is so depressed he’s letting crime happen all around him, until Combat Kate turns up and becomes so annoyed she whacks the Giggly Sisters with her Combat Handbag... revealing them to be robots Their scheme revealed, all the villains attack, with the bobble hat going back on as Combat Colin returns!

As good as it is, it feels like some of the colouring is rushed on this one, the Gigglies are white haired at one point, whilst the Amazing Dave suddenly goes back to brunette.

The final part of the poster, still not properly credited, shows Optimus manspreading with style. I have no actual memories of this poster as a kid and am pretty sure the first time I saw it was when I got the entire series six years ago. Was the newsagent a big Wildman fan? Either way, it’s an impressive piece of work all together, giving us a good idea of what the Andy version of this story would have been like.

Tomorrow I’m standing up to a fat orange monster of my own at the Trump rally, complete with Transformers placard. But if I survive that, next week it’s what happens after the end. 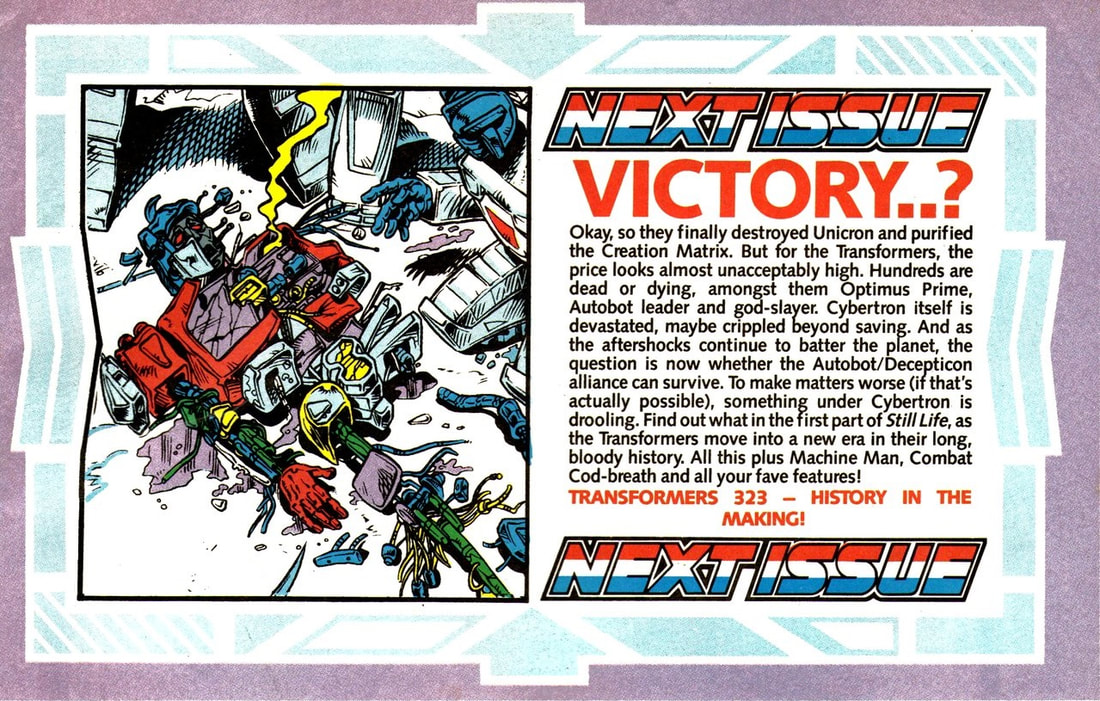 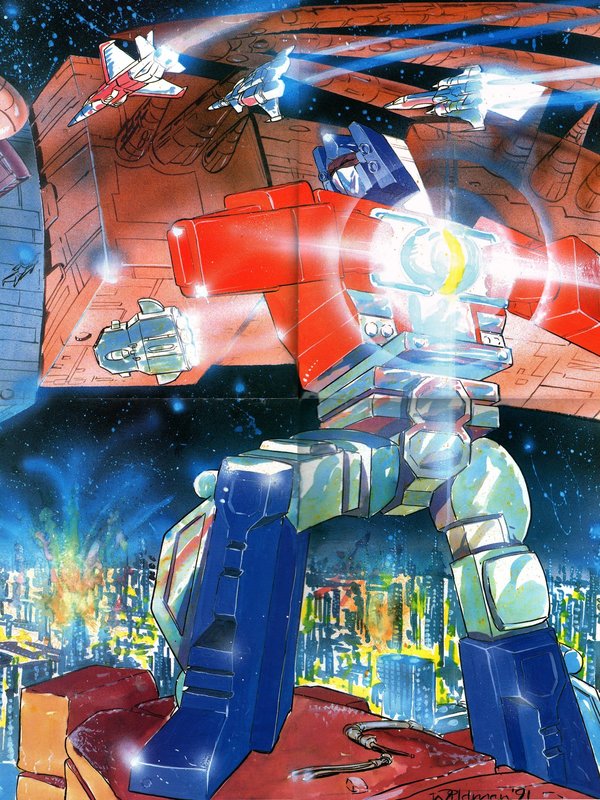