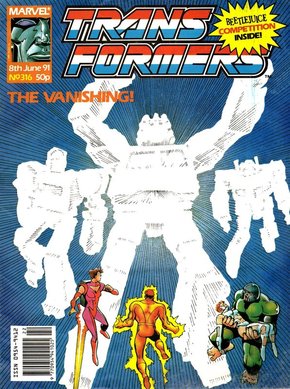 
Hah. For all their supposed omnipresence...even gods can be conned!


It’s a fun minimalist cover this week from Wildman of Prime, Scorponok and Shockwave vanishing in a white light, though it is a shame that it rather gives away the ending that the rest of the comic seems to think is an amazing surprise. Not to mention giving the Neo Knights too large a presence. Good shout out to Dutch cinema with The Vanishing! tag-line though.

Inside and we open with the wrapping up of a lose end, as Hook, Line and Sinker enter the Primus chamber so they can die quickly and be written out of the series. Galvatron does lampshade how fast Sinker and Line go down, pointing out he can’t believe he was beaten last time.

It’s a fun fight though, with Galvatron enjoying his revenge and the three stooges even getting to show some personality, especially Hook, who is well pissed at the death of his friends and becomes a more difficult challenge for the Decepticon. 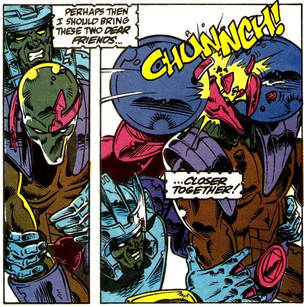 Galvatron: Bringing people together.
Which is when we cut to Earth, and this is where that side of the plot picks up. First we get a reminded that Mindwipe is actually one of the most powerful Transformers if only anyone cared, as he easily hypnotises Soundwave (looking like he’s standing over the wrecked body of Runamuck, something the comic will completely forget) and bends him to his will. This gives us a nice comedy scene of Mindwipe being incredibly smug about their chances of winning now, only to wind up with Kup placing a (normal, so presumably all the targetmaster partners were killed in the bombing) gun to his head and suggesting one small change to this plan.

The real shock, you’ll pardon the pun, is that after five years we finally get a decent Circuit Breaker moment that actually justifies her inclusion in this story, if not the rest of the Neo Knights.

Beneath a fantastic panel of Josie zapping Optimus, we have Blackrock desperately trying to reason with her, as Thunderpunch flat out says he won’t fight one of their own (which of course makes him being there pointless). But a very familiar face pops up as he sees Shockwave transform and prepare to finally kill a defiant till the last Scorponok. 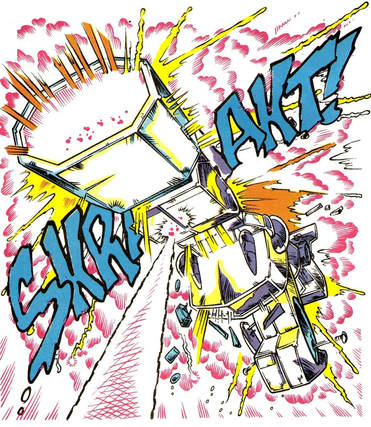 Payback's a bitch.
So in a pay-off a very long time coming, Blackrock recognises the robot that destroyed his oil rig all those years ago and points him out to he near naked friend. Which triggers a flashback and her throwing everything, and I mean everything, at the purple one eyed monster. Grounding him and knocking her out as well. It’s a fantastic cathartic moment that uses old continuity well and is easily the best material she’s ever had.

Scorponok also does well, finally accepting Prime’s plea that they can’t go on like this. Making all of this an unexpectedly strong conclusion to a plot-line that felt it was going off the rails last week.

On Cybertron we get a literal dues ex machina as Hook is blasted by a Godly beam from... Xaaron! Who is now the avatar of Primus, with God speaking through his golden boy. It’s hardly surprising that he adopts the Christ on the cross pose as he floats in the air. But it seems mind-reading isn’t one of his powers as he takes Galvatron’s plea to bring all the Transformers together in one place at face value, much to the Decepticon’s joy. Though future events will suggest it’s less that God is fooled, more that he just doesn’t care.

In New Jersey, we get a nice pay-off to the Mindwipe gag as, thanks to Kup’s influence, Soundwave is now very pro-Autobot alliance. Making the old codger wonder if they could just hypnotise all the ‘Cons... before he and Highbrow vanish in a flash of light. 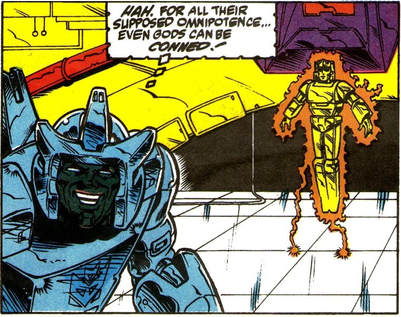 Jesus Christ.
Which is then followed by Prime and Scorponok doing the same, just as Prime was about to explain what is causing him visible pain (hint: It’s not Circuit Breaker), before the Neo Knights get dragged along because their helicopter was touching the knocked-out between issues Nightbeat.

This means we get a very important last in the series, and something we’ve not seen since Budiansky was on the book: The baffled human bystander, as a cop who must have been inexplicably standing in the middle of this war zone wonders how he’s going to write this one up.

If that twist was blown by the cover, we do get one final surprise as, on an asteroid in deep space, we see Thunderwing’s shattered body and the Evil Matrix floating above it, hungering for revenge! Which is such a shock, the UK team forget to put a NEXT box in.

This completely turns things around on the flaws in the last issue, with the Circuit Breaker plot being genuinely well done and even surprisingly emotional. With the Cybertron side continuing to be strong, that makes for a much improved second half. 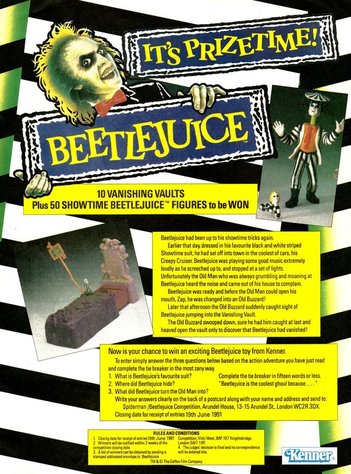 Not as good as his jokes.
On art, Wildman knocks it out the park with some great panels, and it’s especially nice he remembers to draw Waverider without his Pretender shell. It’s just a shame that Yomtov lets him down, having a tendency to get halfway through colouring the characters in a panel before he notices the pubs are open and quickly makes everyone else urine yellow.

Transformation claims this is our last visit to Earth, suggesting they didn’t know everything that was to come yet. Though the use of “Last” is interesting, this is not a book that thinks it has a long and unknown future.

Whilst the competition itself continues to use Michael Keaton, the sidebar makes it clear the Beetlejuice competition is a tie-in to the cartoon with its animated version of the character encouraging you to enter. Said competition, for Vanishing Vault and Showtime Beetlejuice toys, requires you to read a passage about a day in his life and answer some simple questions on it (“What is Beeltejuice’s favourite suit?”).

My Twitter follower Ian Hewett of Swansea writes to Blaster to tell him he’s found out where the cover from issue 305 came from, a bit of research that impresses the Autobot. According to Ian though, the editorial team clearly thought he was a bit too critical in pointing out some of the errors in the book (including our old friend Bomb Blast), putting exclamation marks in and adding a new sentence saying “All this aside, Transformers is still the best”. See the letters he got back from Blaster (one to say it was printed, one with the toy) HERE.

Never to be heard from again.
Philip Kane of Tallonstown asks about Cybertronain football teams (which apparently includes the likes of Terrorcons Ununited) and whether Blaster has a sister. Turns out he does, Karmen, who turns into heated rollers. Which, after the last issue, means the letters page continuity has twice as many female Transformers as the comic itself does.

We get our final letter from James Roberts this issue, and he gamely sets me up for an easy punchline as he says how much he likes that the Transformers aren’t transforming so much any more and that he’s looking forward to seeing who dies. He perhaps oddly also says that having a consistent artist and writer team makes a huge difference, when there’s only been the odd issue before Wildman came aboard that wasn’t Delbo working with either Furman or Uncle Bob.

Lew Stringer sends up ‘90’s excess as Combat Colin, having seen Spider-Man being all heroic, decides to expose himself to radiation to gain superpowers.

This only turns him into what Semi-Automatic Steve calls “Burnt toast man”, but after a super-quick clean up, it’s a bad egg for breakfast that causes “Something funny” (“That’ll make a change”) to happen to Colin as he turns into a super bodacious ripped hunk who says “Dude” a lot. There will be tears before bedtime.

Next week, the sermon on the mount. 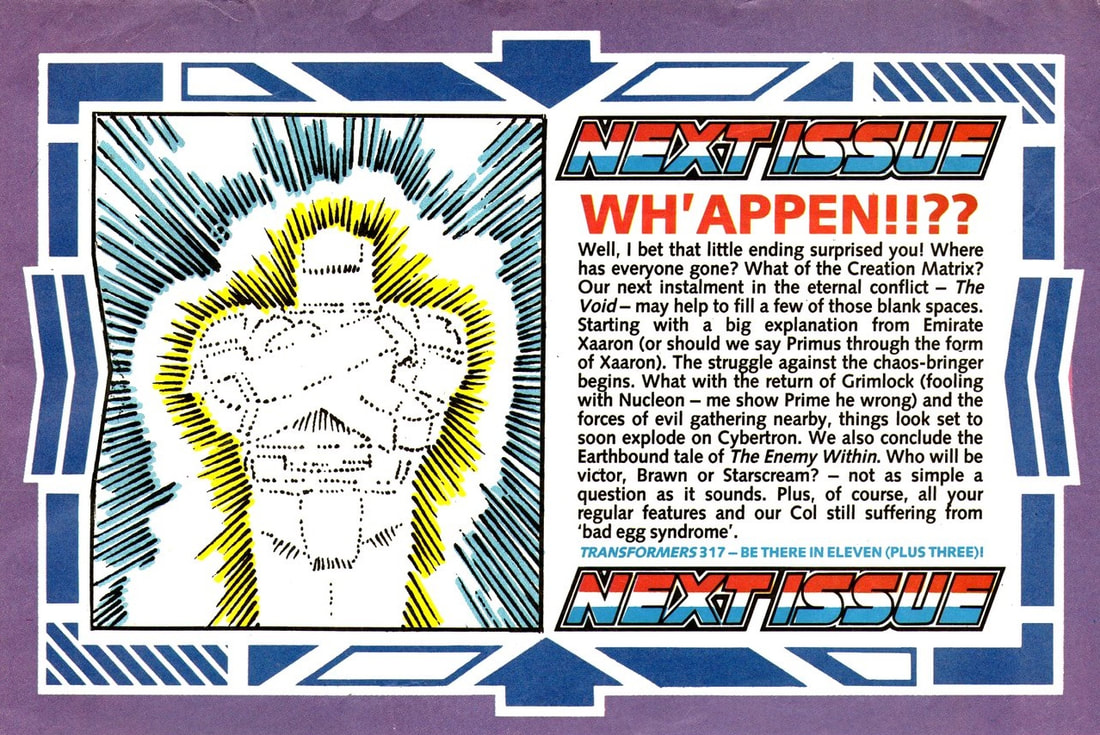