And Time, Time is Not on Your Side. 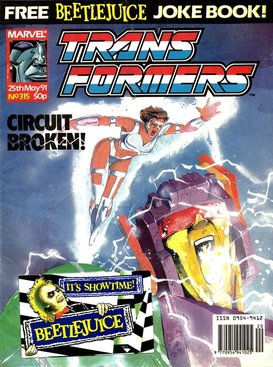 
HAHAHAHAHA! Now I’ve seen everything on this miserable little planet!


Whilst the painted Andrew Wildman cover for this issue is nicely done, putting Circuit Breaker (looking like a cosplayer who’s run out of body paint as that horrid new Arcee statue) front and centre was always going to be potentially off-putting to readers who remember what a terrible character she is. Thank goodness for the Beetlejuice Jokebook free gift as a placebo.

Said jokebook is actually more of a pamphlet that is mostly given over to promoting the current toyline (presumably the cartoon had just reached these shores, though it is Michael Keaton on the front) and suggesting some practical jokes like the old finger in a box trick.

That leaves room for only six jokes, of the “Where does Beetlejuice get all his jokes from? From his crypt writer” variety. Which may make it the most underwhelming gift since the magnifying glass.

Turns out thoughts and prayers really aren't the answer.
Inside, and the first part of Out of Time! is neatly split into two halves, one great, one much less so. See if you can guess which is which.

First up, we’re in Cybertron, within the Primus chamber as an increasingly exasperated Galvatron demands that Xaaron wake up their God. The interplay here is very nicely done, for all his supposed strength the Decepticon is just as worried as his hostage is with time running out before Hook, Line and Sinker are sent for him. Xaaron meanwhile is having to placate the madman with not unreasonable excuses for it taking time (as the last time anyone did this it caused a planet quake, so taking things slowly is key) as he desperately tries to work out how the hell to do what even he admits is probably their best bet to stop Unicron. And hey, is that Primus reacting to Xaaron’s prayer at the end there?

Unicron himself is so keen to get to Cybertron now that he’s actively passing by planets, with the people of Jhi thinking it must be fate they’ve been spared when it’s just greed. This cutaway to an alien world already feels prescient of the Generation 2 comic, even before a throwaway (and presumably coincidental use of a phrase Furman just likes) mention of the Swarm.

Unicron’s only concern is that Galvatron has gone off the gird (who could have predicted that? Not the guy who can see all future possibilities) meaning the couple of Autobots left at their base are spared when Hook, Line and Sinker are sent to reel him in. 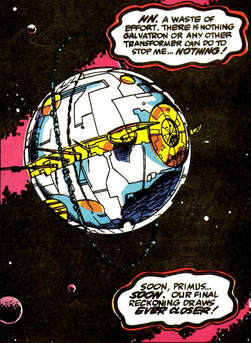 He does need to go on a diet though.
Which is when we cut to the Neo Knights.

There’s one good moment here: Scorponok completely pissing himself laughing at the four twerps. It’s exactly the same reaction Marvel had to the pitch for their solo book.

Otherwise it’s just, ironically, making time as it turns out Rapture is indeed the only one of the new guys who poses any threat to Transformers. The best Dynamo can do is push him over and Thunderpunch only bruises his own feet. Circuit Breaker can do some serious damage though, meaning Shockwave is prepared to smugly watch her finish off his rival before killing her himself.

No, actually despite saying this is what he’s going to do, Shockwave shoots her before she’s delivered the killing zap. For no good reason. And being Circuit Breaker she’s decides the wrong Transformer attacked her, instead picking on Nightbeat (enacting Prime’s plan to save Scorponok by politely asking her to stop) and going in for the attack as the cliff-hanger. Never change Josie. 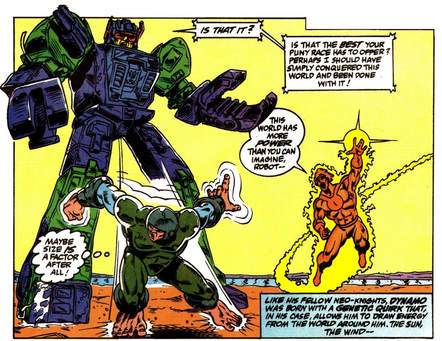 Well, at least they're honest.
The opening is strong enough to still keep this as an above average issue, with Wildman especially capturing the mania of Galvatron extremely well. The Neo Knights however remain a massive, massive drag factor.

Transformation is back to recapping the plot, and is keen to promote there being more Beetlejuice coming with a competition for the toys. It also gives Jeff Anderson his credit for the poster that came with issue 310.

AtoZ covers Landmine, and his personality of a space faring Indiana Jones (that’s literally the comparison that’s made) who relies too much on his pretender shell is far more interesting than he ever was in the comic.

Blaster gets a correction from Kevin Smith of Abenporth, pointing out that despite what he said in issue 312, the new Action Master characters like Krok are coming as they’ve been in issue 76 of the American comic. 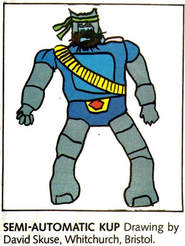 Only needs neon to be G2.
Future member of the TFNation team and rare toy collector David Mapes writes in to point out that the new Renault Clio advert (watch HERE) has the car turn into a robot. I wonder if that were early CGI or model work? Either way, Blaster clearly doesn’t get down with product placement and is keen to point out the car is actually a female Decepticon Powermaster binary bonded to a Nebulon ophiologist called Patra. Which is a bit of wordplay that, embarrassingly, Umar on Twitter had to explain to me.

What a state we’re in though where the letters page has created as many female Transformers as the comic itself.

Kevin Barron from Diffield writes a lengthy letter saying how much better the original and mature storytelling of Simon Furman is than the childish boring and predictable comic it was previously (when often written by Simon Furman). Blaster is delighted for the praise, but throws Micromaster wrestling fans a bone by saying childishness shouldn’t be knocked. He also takes the praise for Machine Man to clarify it’ll be back in issue 318. 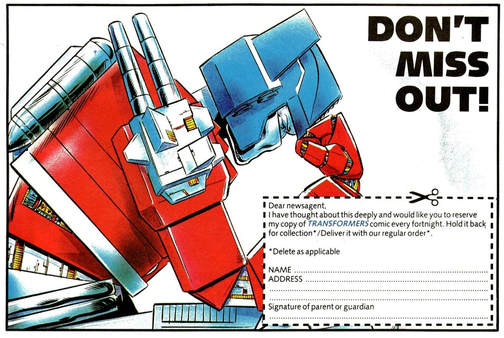 Too good not to use every chance.
We’re now at the stage of getting fan art inspired by fan art, as following up on Optimus Colin from a few weeks ago, we have David Skuse of Whitchurch send in Semi-Automatic Kup. Who, with his big ammo belt and bandanna, basically predicts the entire look of the Generation 2 comic.

One of Our Gigglies is Missing! concludes with a full on return to the Twin Peaks homage as the magic battle robs the Amazing Dave of his powers and leaves his hair white. Which he sees in the reflection of the window to a cherry pie shop. Mutant Master escapes after Joanne threatens to beat the tar out of him, which is when Julie shows up, having been shopping. Making Colin and Steve decide to end the story before readers Lynch them over such a cop out.

Next week (and the coupon to reserve your copy is now using the Staz’ Thinker Prime art), will the Neo Knights also end in a cop out? 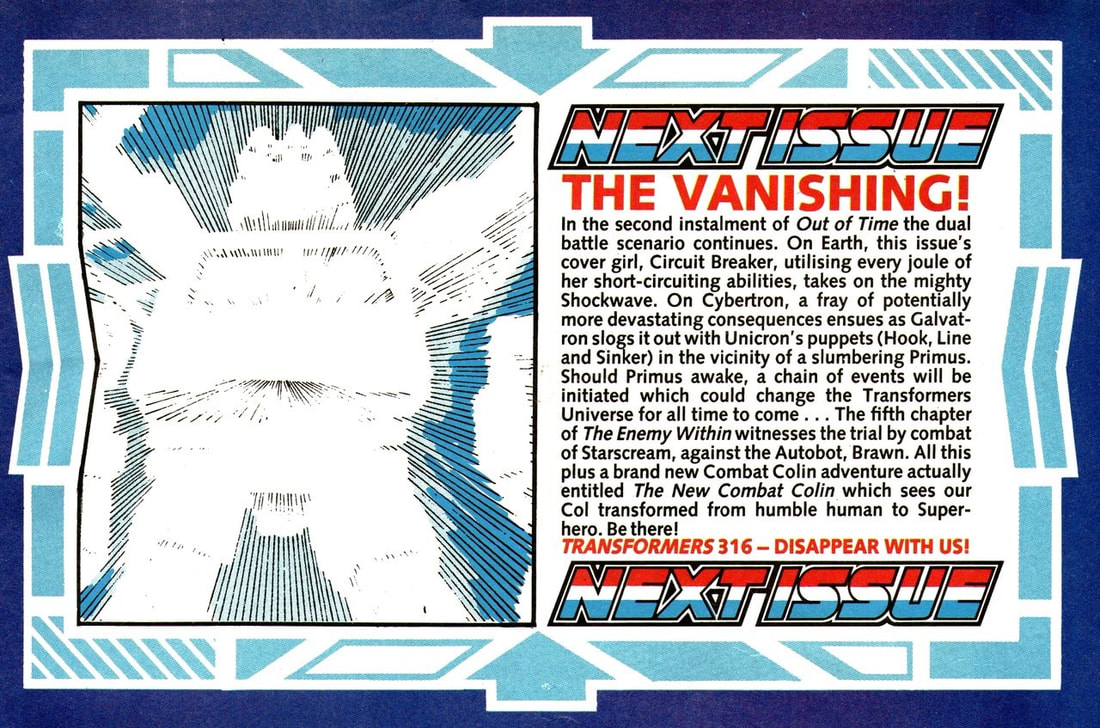 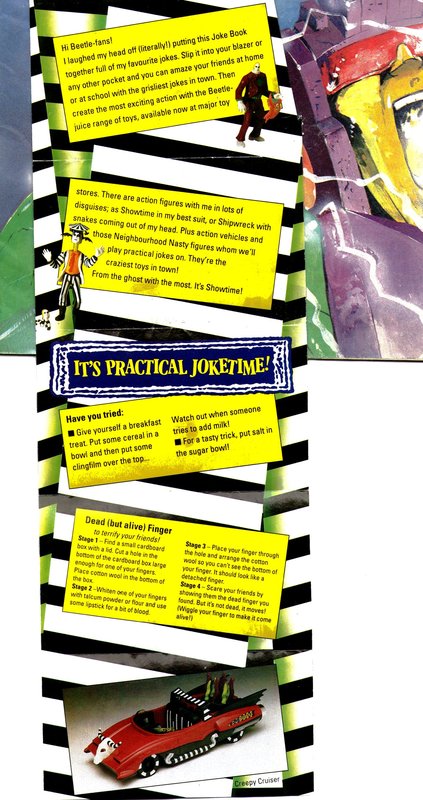 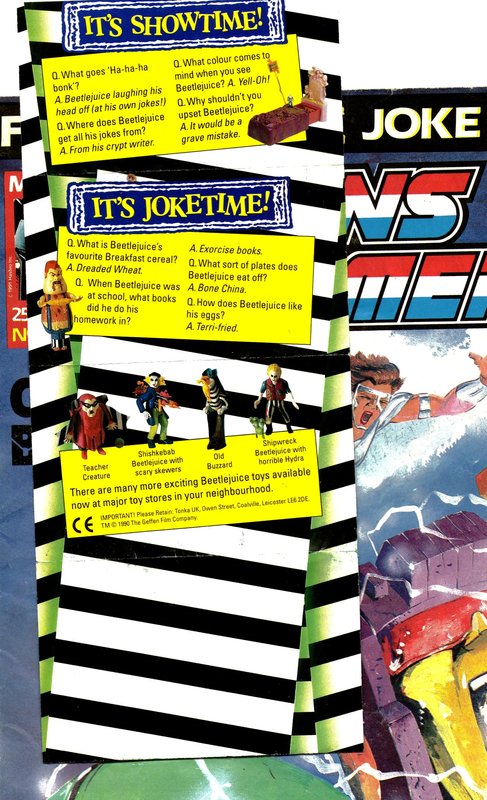