Concrete Jungle Where Dreams Are Made of, There’s Nothing You Can’t Do Now You’re in New York. 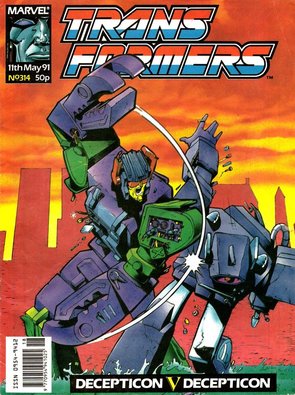 
You’re a relic Shockwave. A dinosaur! And it’s time you became extinct!


The fantastic Wildman cover of Scorponok giving Shockwave a good wallop (perhaps shouting “STOP BEING BEHIND EVERYTHING” as he does so) effectively sets the stage for what we’re getting this issue as the scale increases once again: A great big fight with Manhattan as its backdrop.

Inside, Wildman gets to really cut lose with action for the first time as the two would be leaders go to town. They punch and shoot across both modes in a conflict full of energy and... well punch. My particular favourite being Shockwave at one point wondering if he’s buried Scorponok, only be confronted by his rival in beast mode, wielding a cruise boat in both claws that he brings down on ol’ one eyes head. I can’t remember the last time we had a fight that so perfectly captured the size and scale of these battling robots in comparison to our human world. 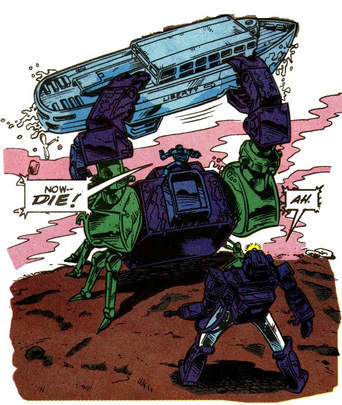 Give me liberty or give me death.
Furman’s script is more than equal to the art, carefully showing the threat to the locals as stray blasts demolish skyscrapers and being sure to make the difference between the two fighters stark. Normally lengthy speeches in the middle of a fight can be awkward (as lampshaded last issue with Scorponok telling Shockwave he’d do better if he shut up), but here it adds extra layers to the punch-up. Shockwave spelling out that Scorponok has been nothing but a failure as leader and he just wants to stop the Decepticons being a joke, whilst Zarak counters by saying Shockwave could never lead anyone as he has none of the passion a great commander needs.

Of course, Shockwave’s stint as leader all those years ago when he stole Prime’s head (and, though the characters here wouldn’t know it, his future leadership in the UK stories) was considerably more successful than anything Scorponok has managed, but I think the reader will automatically be on the headmaster’s side here, which is where Furman’s adding of depth to him really starts to pay off.

Optimus meanwhile has a choice to make as he comes out of the swamp and sees the Decepticon Civil War in full force. Protect the alliance, or protect the humans. Something made stark as he and Nightbeat “All the dirty jobs”) race in to stop Scorponok and their potential ally makes it clear the team-up will only hold if he gets to finish his private squabble first. Which, even with Shockwave is arguably on his last legs here and the Autobots fighting with Scorponok would likely end it within a few minutes (certainly quicker than if they took on Scorponok and his troops), was never going to be a choice for Prime and he of course settles on protecting Earth.

He's not seen the opening of the 86 film.
Amidst all this we have two cutaways. The first is to Cybertron, where Galvatron has caught Xaaron... but doesn’t kill him as he’s correctly reasoned that within the shell of Primus it’s impossible for Unicron to read his mind. For all his bluster, he’s clearly on edge and genuinely panicking about Hook, Line and Sinker catching up with him as he demands, to the point of almost begging, for a way to kill the chaos bringer. Which is where the equally desperate Autobot throws out the idea of bringing all the children of Primus together. So all Galvatron needs is a being that can teleport everyone to Cybertron. Obvious really. No wonder Xaaron, held up against the wall by his neck, is more than a little worried.


The second is much simpler, being to simply show us George Bush Sr. (who handily says “Read my lips” in case we don’t get it) telling his military advisor that they need a less destructive solution than sending in the troops, before getting on the phone to G.B. Blackrock.

Yes, it’s fair to say things haven’t quite lined up to give us the natural cliffhanger at this point of everyone being summoned to Cybertron. That means we’re going to get another two weeks in New York that will give us the weakest material in this otherwise great era, as the Neo Knights arrive to sort out the giant robots. 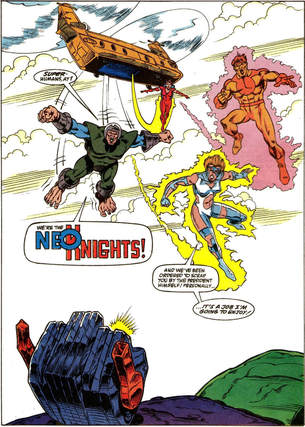 Just look at the state of this.
The full page splash that concludes the issue is so terrible you have to wonder how it passed through so many hands without anyone going “Is this a good idea?” The Knights look stupid, their attempt at banter is terrible (“We’ve been personally ordered to scrap you by the president himself! Personally it’s a job I’m going to enjoy!”) and bloody Thunderpunch even manages to say “Ay” because God forbid his one tick doesn’t get used. I’m not even sure why the non-flying Rapture gets a jet-pack, but Thunderpunch doesn’t.

Still, despite that, this continues the fun romp of the first half, with lots of memorable strong imagery that shows a creative team (bar Yomtov) all on strong form.

Transformation is written in the style of a boxing commentary, at least until the editor steps in and says “That’s enough of that”, though it doesn’t stop the piece ending with a “Know what I mean, ‘Arry”.


The sidebar meanwhile is keen to promote the forthcoming free gift of a Bettlejuice jokebook. Be still my beating heart.

AtoZ covers Punch and Counterpunch, pleasingly kept nearby to one another. Real nearby. These are, I think, also the first characters covered never to have appeared in the actual comic, creating a “First appearance” of “Right here” for both of the two very different bots.

The Enemy Within! reprint includes one delightful moment I’d completely forgotten about and which made me laugh out loud on this reread: Skywarp shouting “BANG BANG” as he fires his guns.

I'm never sleeping again.
One of Our Gigglies is Missing! Sees Mutant Master arrive to destroy the under construction Moonbridge, only to be confronted by Combat Colin and Company. MM is s confused as anyone about where Julie is as his kidnap attempt failed, and the instalment concludes with him wrestling with the equally magic Mountain man is a surreal battle (where some of the Twin Peaks imagery returns, palm trees, pies and owls are flying about) that “Makes the world turn weird!”

Blaster is all about the mothers this week. First up being self-proclaimed oldest reader of the book, Mrs Rose Maps of Ashford. Rose is a 49 year old (which would make her a sprightly 76 now) who originally brought the book for her children, but now keeps reading it herself and she really likes the new format.

Penny Bennett of Redditch is also a mum, but one writing in on behalf of what she believes is the youngest reader, her son Daniel who became a fan at two and a half. She’s glad for both the entertainment the book has bought him and the hours of silence it has given her.

Mother’s Day is then topped off by James Sinclair of Crewe threatening to set his mam on Blaster if his letter isn’t published. To which Blaster replies that she must be very proud.

Art this week includes Sockwave by a kid who forgot tin include their name (he has a sock for a hand) and Optimus Man by Russell Gillespie of Devizes. Which is a frankly terrifying bit of nightmare fuel of an Optimus/Human hybrid that makes Ratchetron look adorable.

Next week, is it a good knight? 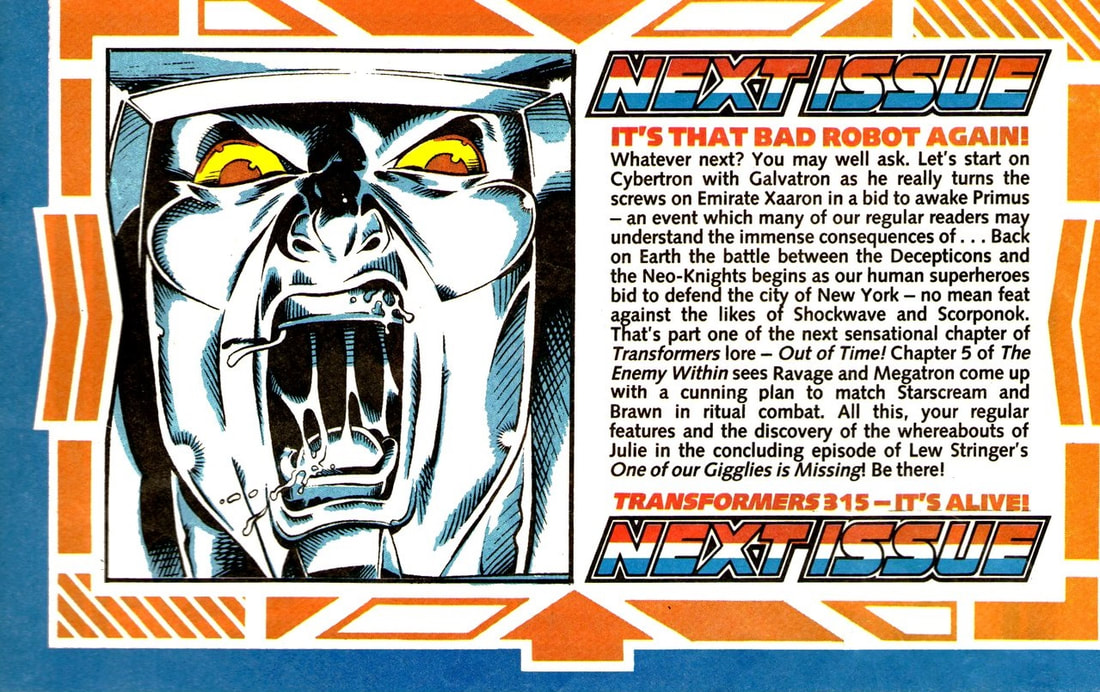