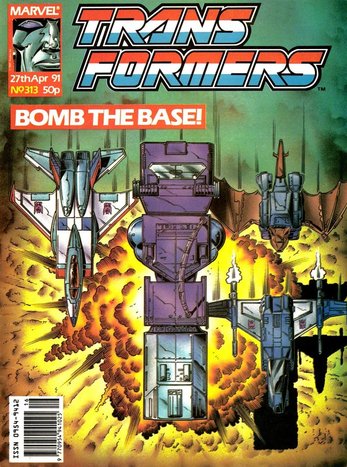 
Must be the quickest coup the Decepticon army has ever seen. And I mean...there’s certainly been enough of them!


Mad fer it! Yes, the 1990’s have well and truly arrived as the cover tagline of “Bomb the Base” is a pun on early ravers Bomb the Bass (you can tell editor Harry Papadopoulos used to be a rock photographer). And it’s not the only thing within to suggest we are now well within the age of living it large.

The lead strip however suggests Furman was a more sedate soul, being named for the 1976 film ...All This and World War 2. After three fairly contained stories, this is where Furman starts to open things up and increase the scale and action. Something made obvious by the opening splash page showing Team Shockwave surrounding the wreckage of the destroyed Decepticon base, with Starscream gloating over how easy it was.

The next two pages are basically a recap, but handled very well with lots of decent character work. As Shockwave points out it’s logically not likely that the issue would end on page one and therefore Scorponok may well live, Mindwipe and Triggerhappy start leaking oil in fear. Which lets Starscream muse on the circumstances that led him here with complete disdain for his new team of “Rejects and scrap-heap warriors”. Shockwave is a means to an end, one that will be disposed of as soon as the opportunity arises. Or rather grabs him, because as he searches for survivors (Decepticons get the choice to sign up or die, Autobots don’t get option one) the long claw of fate gets hold and reduces him to a screaming coward. Scorponok is not only alive, he’s ready to bash heads. 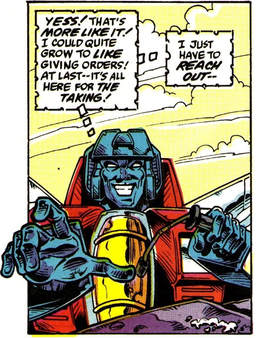 Obviously it was logical for Shockwave to trust this guy.
This is of course Furman shifting through some of his ideas from the dying days of the British series, though there’s no way of making them line up easily.

Underground, Optimus (who has now managed to lose one of the shoulder guns the Decepticons kindly let him keep, so they are removable!) is digging Hot Rod out of the rubble, and is pleased to see Soundwave has survived as well and is rallying what troops are to hand as it means others may have been spared as well, alleviating his fear that the lion’s den he has brought his troops into is now their tomb.

Indeed, it will turn out no named characters died at all, making Shockwave look rather inefficient in his planning and Starscream over-confident in his assumption Scorponok was dead. The next Autobot to show up is Kup, who makes a joke about this being worse than his last party that the wiki takes completely seriously and has a note to the effect Kup has thrown at least two parties in his life.

It’s at this point Prime realises the alliance is in serious jeopardy. But at the end of the day, protecting the humans has to take priority over trying to salvage things by fighting with Team Scorponok, containing events so they don’t reach New York is now the mission. 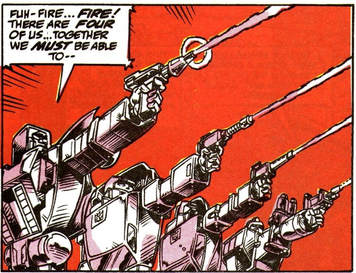 The best and the brightest.
In the city, we see the problem get passed down the line to the police commissioner (you can tell he’s the police commissioner as he looks like Commissioner Gordon), who wonders why the blasted things couldn’t have stayed in Oregon. All of which sounds like they’ve not noticed the giant alien robot base on their doorstep for a good two years. Luckily for New York, the decision now goes even higher, all the way to the President.

In Jersey, we get a fantastic action scene of Shockwave’s boys being completely useless against Scorponok. Even Ravage is easily flung aside with a smirk, and the troops who have less brains have to psyche each up to do something as simple as all firing at once.

Which does nothing. No wonder Scorponok is having a good laugh. Even Shockwave messes up by spending more time talking out loud to calculate the damage his own gun would do than actually firing, allowing Scorponok to jump him and dive the two of them into the Hudson.

Despite being close to a literal cliff-hanger, we get a following concluding page on Hydrus Four, with the Dinobots all up and about and ready to take nucleon to the masses. But Grimlock is pulled up short, literally, as his leg briefly freezes when talking to Slag. Making him wonder on that mechanoid’s words of warning... 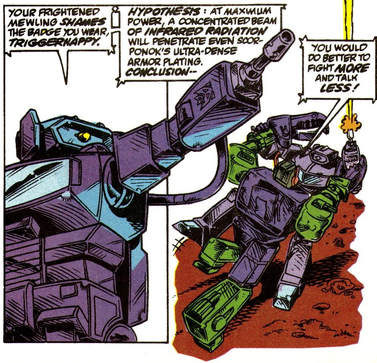 Shockwave's one weakness.
This is a nice bright and breezy issue with lots of fun comedy moments that nicely breaks up the doom filled atmosphere of what we have either side of it. Every character, even the briefly seen Dinobots, is well written and Wildman’s art is having a ball with the more light hearted action.

Transformation must think it’s a winner as well as—shock horror—it recaps the previous issue (and the resumed Enemy Within!, Machine Man is taking a break now to allow it to finish) with no mention of the events of this story. That’s the way to do it.

AtoZ cover Slapdash, reminding you what a useless character he is.

Because The Enemy Within! is being broken up into smaller parts than it was originally, we see a return of the American recap boarder. I almost feel nostalgic for it.

Blaster gets a trans-Atlantic letter from Tony Preto of Santa Clarita USA, who has found lots of back issues in his local comic book store and has a theory about how Time Wars Galvatron can remember things that happened to the fake Megatron. Blaster admits this is the biggest source of debate and confusion amongst readers. Though he oddly also says Simon (very informal, that’s Mr Furman to you) is working hard to tie up loose ends. Which is at odds with his previous claim that the current stories are not in continuity with the British ones.

There’s a lot of letters from girls this week, starting with Katherine Mohothar of Streatham. She asks Blaster for help as her two brothers, Andrew and Philip won’t let her read their copies (that’s copies plural, one each rather than sharing. You’re both allowed a comic and you pick the same one? Small idiots) and her dad won’t buy her one, not because three copies of the same comic would be silly, but because comics are not for girls. Which is basically the attitude female fans still have to put up with. Blaster commands that the brothers should share their comics with their sister. 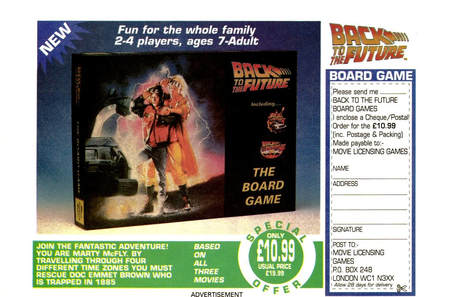 Get back in time.
13 ½ year old Linda Flack of White Roding isn’t a fan, but her nine year old brother is and has been watching Arrival From Cybertron. So in an even older question than the Galvatron one, she would like to know where Optimus Prime’s trailer goes when he transforms. Blaster is forced to admit this is the other great mystery of the series, but that the current Prime merges with his trailer at least.

More impressively though, Linda’s “Make my brother’s Marvel” includes “EMF experiences" and “Manchester raves”. Kids those days certainly lived. Presumably the entire comic is laced with ecstasy at this point.

Combat Colin has no time for the Hacienda, instead going to an Amazing Dave magic show at the Posh Nosh restaurant. Dave claims to have had nothing to do with Julie’s disappearance after Colin jumps out of his hat instead of a rabbit. The accusation annoys him so much after trying to go straight he turns into Mountain Man, and convinces Colin by tying his legs around his head. Luckily, like pekes, Mountain Man is psychic and senses the Moonbridge is connected to all this. And of the course, the Moonbridge was recently threatened by MM... Mutant Master!

Sadly the Twin Peaks spoof is entirely dropped this week, but this is made up for by some great sight gags.

Next week, drop a tap like the cool kids as the Decepticons take Manhattan. 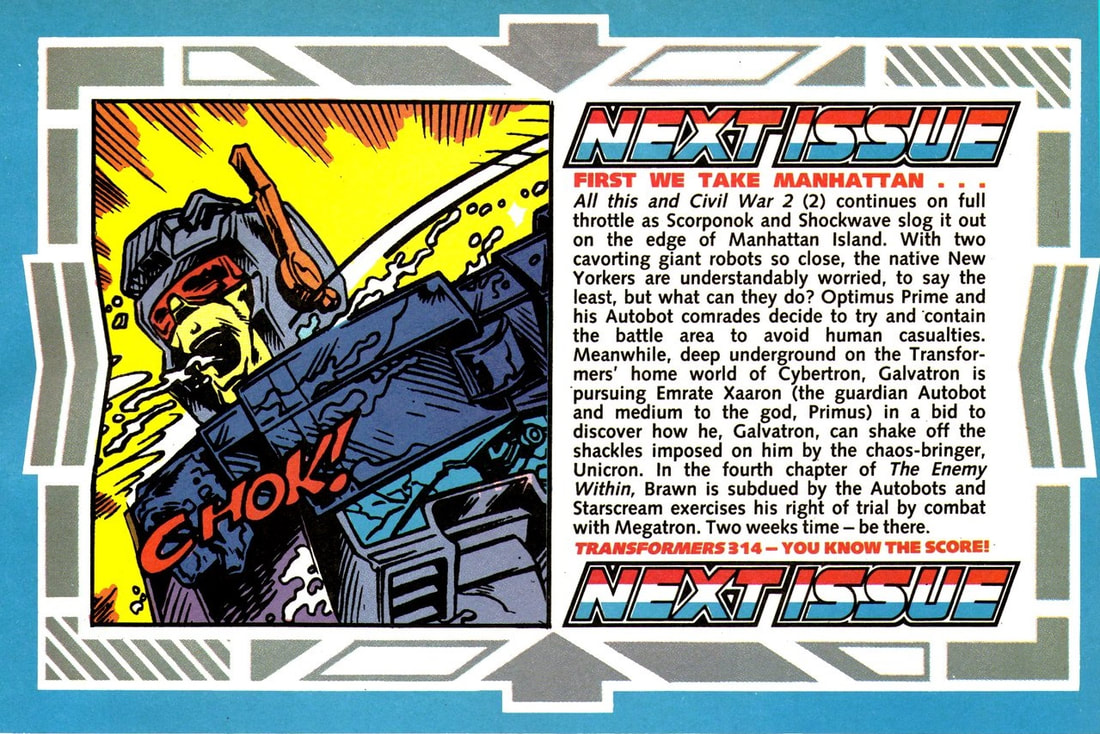