The Way We Did it was Merciless and Exact, Just Like that Now World Famous Attack That Fucked Osama bin Laden. 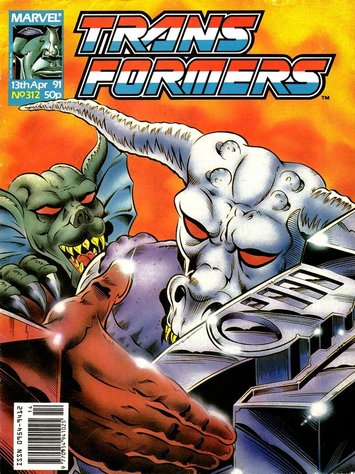 
Thank you for your hospitality Soundwave. But I’m afraid...I must be going!


We get a very odd cover this week, where the proportions and angles of the characters look oddly off. It feels like the original idea was a minimalist piece of art with just the near Prime/Scorponok handshake. But at some point along the way, it was decided it needed more and an awkward Bomb Burst and Skullgrin got added. With Bomb Burst looking above the handshake at Scorponok’s face and Skullgrin staring a bit too low as if looking at Prime’s groin.

This is an idea backed up by Transformation, which makes a big deal of how they felt the oft-ignored original Pretender Monsters deserved a cover, but can’t get Bomb Burst’s name right, calling him Bomb Blast. As the usual cover team of Stephen Baskerville and Robin Bouttell is joined by Lesley Dalton, I’d suggest the seemingly added Decepticons were down to them.

Inside we get something that hasn’t happened in years: An actual dialogue change to an American story! As noted last issue, Prime’s thoughts on what was happening to Cybertron was originally a segue to the planet. There were two narration boxes across two pages pointing out what an opportune moment to cut there, with the first simply being removed by the UK team. Here though, the narration is changed to... a location caption! That’s very exciting, I’m sure you agree. And impressive as there’s one issue before the end where dialogue carries on between issues with no changes made to stop a part ending mid-sentence.

He'll need some ointment for that burn.
Our visit to “Cybertron” sees the plot of the story really kick into high gear as Galvatron (who presumably knows its location from his future knowledge) unleashes a full bodied attack on Autobase, cheerfully putting on a show for his watching master with shouts of “Blood red twilight descends on your planet, and I am is harbinger!” Nothing like self promotion.

You can also easily see from his smug Jack Nicholson grin as he sends Hook, Line and Sinker in that he’s having a great time, something helped by his assumption that he’ll be able to get one over on Unicron sooner rather than later.

Inside, Emirate Xaaron has little patience for his idiot troops as one (possibly meant to be Scoop based on who else is in the scene, but if so he’s miscoloured) helpfully points out they’re under attack as the base shakes and rocks under explosions. It’s little wonder it barely takes two paragraphs for Xaaron to be persuaded to run away whilst the other Autobots stay behind to cover his retreat, leaving Quickmix(!) to bravely lead the Rorke’s Drift style last stand. Which is yet another example of the wonder of toy promotion, no one would ever give Quickmix this role at any other point in the series history, where he’s still a recent toy, but not so recent he can’t be left behind to (presumably) die. 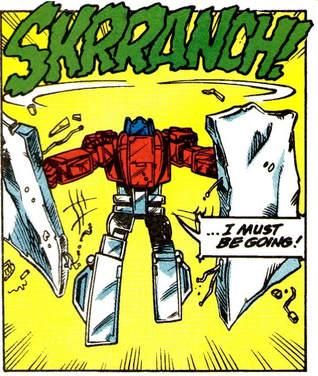 And that's the door of a cell they thought could hold him.
Back on Earth, we see once again that Optimus can work through his times of uncertainty and self-doubt once he has something to punch as he takes down Soundwave and rips apart the doors of his cell with his bear hands. All whilst making a quip.

This rediscovered confidence means he is back on fine speech giving form as he smashes into Kup and Hot Rod’s cell, persuading his reluctant security chief to give him one last chance. It’s one of his best, hitting home how Unicron is one threat too big for all of them.

Which leads us to the Decepticon command room, where everyone is puzzled by four radar blips that are moving too fast for human aircraft and are therefore Transformers. But who? By facing the fact he knows Optimus is too honourable to have left troops free in case of a double bluff, Zarak is now forced to face the fact he himself has acted in bad faith.

Ironically Prime’s gambit stops any preventative measures being taken as Hot Rod drives in, grabs Zarak and threatens to pull the “Puny flesh creature’s” arm and leg off (whilst thinking his threat sounds “Not bad”, presumably an editorial edition to make it clear he’s bluffing). This distraction then lets Kup smash Bludgeon into a wall.

Zarak needs to work on his security.

The situation quickly turns into a stalemate as Zarak uses his mental link to have Scorponok’s body grab Kup’s head. Could Hot Rod dismember the Nebulon before he sends the next mental command? Kup is game for it, but Optimus quickly points out this is all supposed to be a bluff. 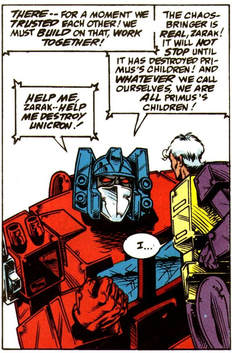 "And...err...I broke your door"
What happens next shows Optimus and Zarak at their best, with Prime again going great guns with a speech about how they are all Primus’ children and they have to act together now before it’s too late. Zarak knows he’s right and decides he can no longer be scared of his own troops (now sauntering into the room, hi Bomb Blast!) and it’s time other were scared of him. Which gives us him re-joining Scorponok as Prime holds Kup back (“We start trusting...now!) and their collective soldiers watch as the two leaders prepare to shake hands.

Which is where splitting the original issue in two works nicely as it creates the symmetry of it opening and closing with an attack on a secret base. Here, just before the hands can touch, the whole building is brought down by Shockwave, Starscream, Triggerhappy and Mindwipe. The Decepticon Civil War has begun! Our last vestige of an idea from the British stories, though one that will play out very differently from how Aspects of Evil! suggested it might.

On Cybertron, things are also going badly underground as Xaaron’s attempts to flee have failed... Galvatron has caught up with him! Who’d have thought Quickmix would not be great at providing a diversion?

This is a tight, dense issue that makes up for the first half focusing on creating a mood by ramming itself with plot, action and character, plus Wildman having such fun with Galvatron.

Actually more surreal than the Twin Peaks spoof.
I promised last issue I would only mention in future if Transformation didn’t just tell you the whole plot to save time. That day is not today. Though it does signpost what Combat Colin is spoofing by calling his new adventure “Lynchian”. The sidebar promises us that Collected Comics for Time Wars and the first part of the conclusion to the Cobra Civil War will be out by the end of April and asks readers to fill in the poll at the back of the issue to see how recent changes have gone down.

Blaster gets a lot of people writing in slang this week, and thanks to the longer gap between issues we get more recent feedback than is normal, with Marco Espolito of Crinklewood praising Eye of the Storm! and John Harry of Stanford-Le-Hope enjoying The Price of Life! and the new format generally. Craig Ash of Tamworth gets his question about whether the new Action Master characters will be appearing answered wrong (just about) with Blaster’s simple “No”. Let’s hope I don’t have to start a Blaster Fails to Answer Questions Properly! feature. 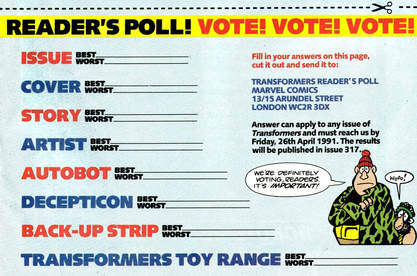 Vote early, vote often.
The big thing though is fan art by Bradley Dardis (! Which amazingly is a real surname despite looking like a misspelt “Tardis”) of Hackney of Optimus Colin, a hybrid of Prime and Combat Colin that works much better than any of those Star Wars Transformers toys.

Combat Colin and Semi-Automatic Steve in One of Our Gigglies is Missing! is, as promised, a dedicated spoof of Twin Peaks, as signposted by the Giggly Sisters owning twin pekes as they and the boys enjoy “Doobrey-fine” coffee and donuts on a night out. It’s not as full on as The Prisoner love letter was as murder and rape isn’t really going to fly here, so Julie Giggly is only kidnapped from home (with a photo of an owl on the wall) whilst Joanne is found tied up. Steve does spot a fish in the coffee perculator, but that’s just a red herring.

Luckily Colin’s new hat has the inbuilt ability to read the minds of dogs and one of the pekes tells him to beware “Double M”, leading the boys on the hunt for Mountain Man!

I had absolutely no idea what Twin Peaks was at the time, so all the extra humour is hitting me for the first time here, but even without that knowledge, this is amazing. 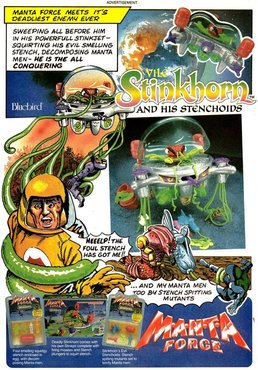 He he. Stinkhorn.
Despite claiming you can vote for any Transformers issue, there’s no “Best/Worst” option for writer as there is, rather cruelly for artist. I guess they figured Budiansky was too far in the past now. You also get those options for issue, cover, story, Autobot, Decepticon, back-up strip and the likely Hasbro requested Transformers toy range. We’re promised results in issue 317, and it’ll be interesting to see if they’re actually published.

But what you’re really interested in is the full page advert for the Manta Force Stinkhorn tm. You sicken me.

Next week... will I be able to make a current reference to a leader having their own side fall on them like a pack of rats? 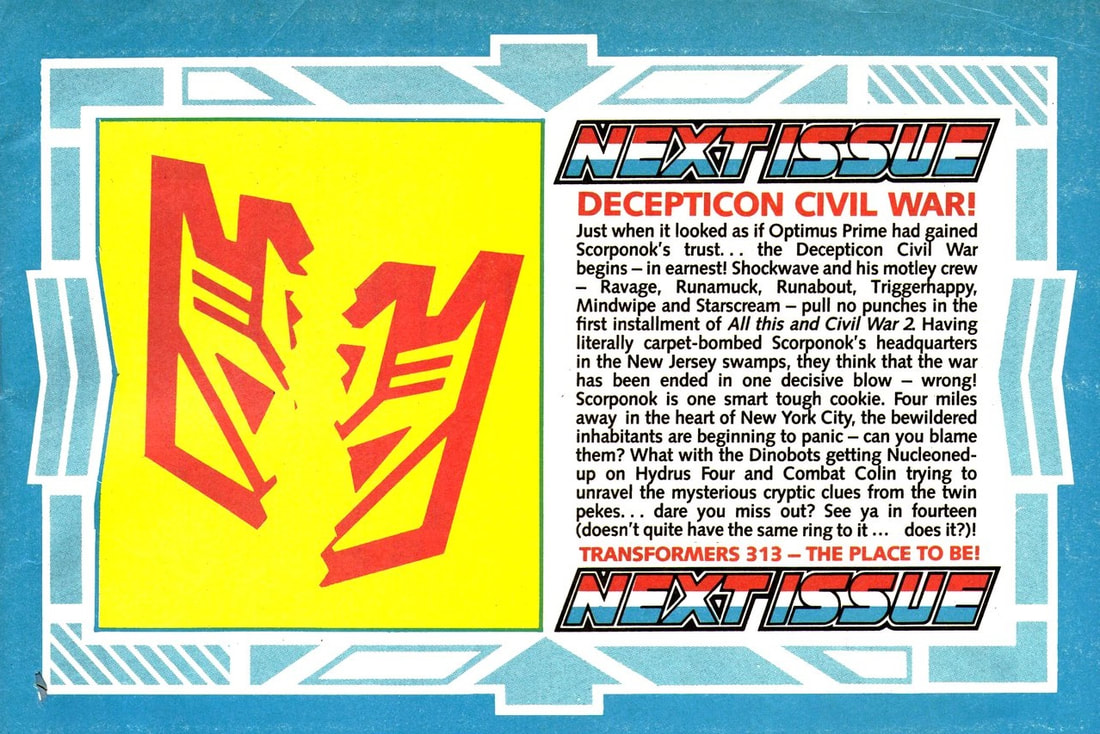