Won't You Please Surrender to Me. 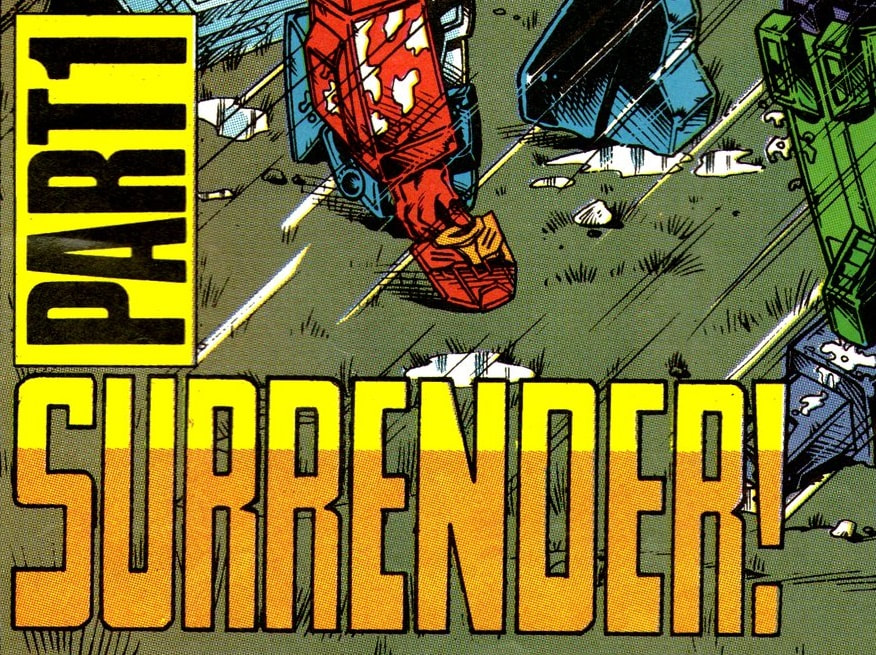 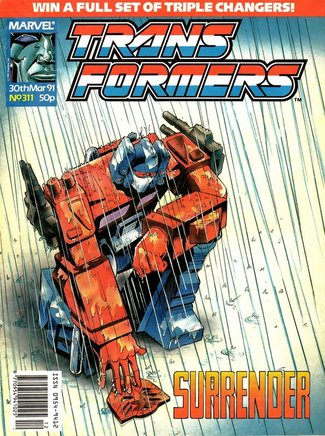 
If you want out, you go feet first!


With the one exception of our Bob Budiansky effort back in 1989, it’s been almost four years since the series has used American covers on a regular basis, but starting with Andrew Wildman's striking image of Optimus placing the Autobrand on the floor in the rain, this will become standard again from now on. Meaning the local artists are reduced to one gig a month.

Inside, you get the sense Furman might be reacting to feedback from American readers (for whom of course the John Wayne inspired cartoon persona was the definitive Optimus) that his Prime has been very out of character with his self-doubting, questioning nature. Of course, the Budiansky version was never hugely like John Wayne either, but that’s the difference between a monthly comic and daily TV broadcasts.

So we open with two pages of Irony, as a flashback to four million years ago (give or take the odd millennium) sees Optimus in full Peter Cullen mode, holding the line against a Decepticon advance as a literally green Autobot encourages him to surrender. To which Optimus asks for the white flag... so he can bind his shoulder wound before leading a do or die charge (with lots or currently dead familiar faces like Prowl behind him), shouting that Autobots never surrender...

So what happened to this guy?
Which then cuts to our cover image of Prime surrendering. It’s a nicely done opening that pulls off the mood whiplash well. We also see just how well surrendering to the “Approachable” Scorponok works out as the Autobots are put through a humiliation conga by the Decepticons, first by him grabbing the Autobrand (they’ve come a long way since that white flag) and crushing it whilst laughing as he “Accepts”.

Then the Autobots are marched at gunpoint off their shuttle, stripped of their own weapons, Nebulons and Pretender shells. Remembering the last two is a nice touch (though it looks like the one concession is the Headmasters get to keep their noggins, reasonably enough). And we get an answer as to what happens to all the Nebulons bar Hi-Q after this: Soundwave shoves them in Tupperware boxes. They’re probably still there.

Kup, unsurprisingly, snaps and slaps Apeface about before Prime talks him down, but otherwise the Autobots are sullen and depressed. So I guess Optimus sorted out the issue of them being too happy really well.

The Decepticons on the other hand are delighted. Meaning Scorponok can just cheerfully ignore Prime’s recap of the threat of Unicron and how this is supposed to be a preamble to peace talks. Instead he’s just glad the mutinous talk amongst his own troops has died out, being just a man beneath the giant robot body always puts him at risk. And boy can Zarak not wait for Triggerhappy and Mindwipe to come crawling back. 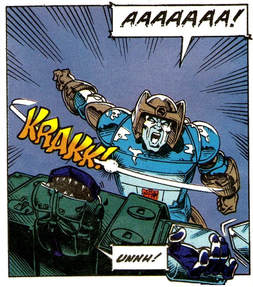 Right in the (ape) face.
Ironically, they probably would rather do that than be trapped with Shockwave and his team (with added Battlechargers!) beneath the sea by Blackpool as One Eye point blank refuses to explain what he’s been up to since seemingly dying and where he got all his equipment from. But he is happy to say the surrender has turned the situation to Scorponok’s favour, meaning their previous subtle plan has to go out the window and it’s time to act. Which seems a bad idea to Mindwipe as they’re still outnumbered more than two to one, but Starscream cheerfully explains option B for the new recruits is horrible death.

Back at the Decepticon base, Optimus has somehow managed to keep his big shoulder guns, but this isn’t enough to mollify him at being locked in a cell with a smug Soundwave standing guard over him. Has he made a terrible mistake? Is Cybertron already doomed? If only he could see what was happening there! Which made for a nice scene transition in the original issue, but sadly just becomes the cliff-hanger here.

I'd have thought Shockwave would be a MISB kind of guy.
Though not a lot actually happens here—once Prime has thrown his badge down the only actual plot advancement is in the cutaway to Shockwave—but this is a little masterpiece that continues the tense atmosphere of the previous two stories and is full of memorable moments like Shockwave having a table of Transformers toys (possibly inspired by Borusa’s similar set up in The Five Doctors. Though they are basically Action Masters) or Missfire being oh so smug as he marches Kup to his cel—room. Furman continues to be at the very top of his game here, with every character shining.

On art, Wildman is also well into his stride, and with the surrender image itself produces one of his big moments of the series. I hope you like the stock art for Cybertron though, starting here that will be used to represent the planet till the book ends. And moving away from the interior of the Ark gets us away from Nel Yomtov’s bizarre decision to make it a visually dull white for the first time in four issues as well.

In terms of presentation, this is the first issue where the opening of an American story has a Part 1 added to its title card, completing the changes that started with the previous issue. 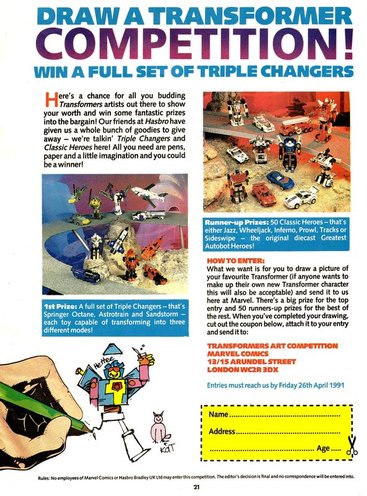 No love for Blitzwing or Broadside.
Transformation again tells you the entire plot, perhaps in future it would just be easier to note when this doesn’t happen. As well as encouraging kids to enter the competition and also send in their drawings for Blaster, the sidebar oddly makes a thing of the fact the Next Week page (now, Next Issue) will be back next week.

I mean next issue.

AtoZ covers Joyride and Getaway, with Getaway’s profile now seeming odd for not mentioning he’s a bit of a cunt.

Combat Colin manages to defeat the Bad Hatter, mainly by shooting his lethal hats out of the air. However, his puns are worse (“Beret good chaps!”), to the point it gets ten years added to his sentence at the end.

I talked extensively about Machine Man 2020 the first time around, so I’m going to be light on it through this rerun. However, I will pause to say we should all try to make “I still don’t flash it bro” real slang before 2020 actually arrives.

The big competition, the banner for which kind of takes away from the cover, is unique for the book as there are no questions or puzzles, you just have to draw a Transformer. You can even create your own! Sweetly, some coloured art from ...Once Upon a Time! is used to represent the sort of thing you could send in to win a full set of reissue Triple Changers or one of 50 Classics Heroes.

Another issue, another letter from a member of TMUK. Though this time James “Blip” Moore of Nottingham seems not to be remembered by the current team, predating all of them. He does provide his full address for people to write for him to get the latest news, though as the titbits he provides are that Hasbro are planning toys that aren’t Micromasters or Pretenders (or the “A” word he refuses to say) and that a second film will have a whole new cast if it happens, his inside sources aren’t that hot. 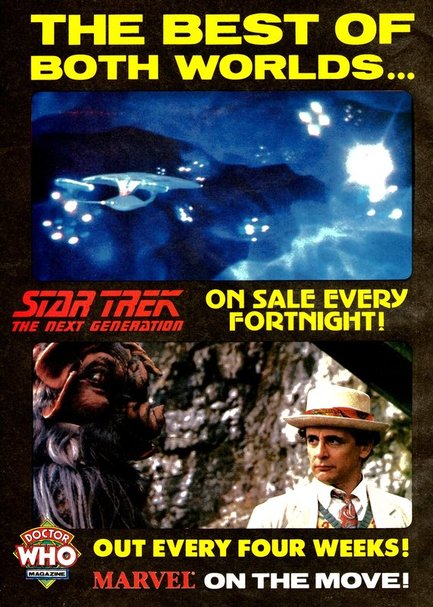 Kids would get the reference if it said "The Neutral Zone".
He also provides the first mention of fanfic in the comic, and basically sets the standard for all that was to come by making it sound like it’s all about the characters fucking. Across the various TMUK stories Blaster apparently has four wives and 12 children. Which understandably worries the Autobot.

Rafat Westerowski of Warsawa, Polska kindly writes in to try and translate the Polish letter from issue 300. It’s hard to be exact though as it comes across as being by someone very young. In the end it seems it was a request for the Stock and Comic exchanges, wanting the American issue 67 and a Prowl.

There are two adverts of note this issue. The first is a new one for The Complete Spider-Man, showing him riding into battle with Colossus from The X-Men and...erm... The Green Goblin. It probably makes sense in context.

The second is a double advert for Star Trek: The Next Generation and Doctor Who Magazine, which has reverted to the Diamond Logo since the last time we saw it, a sure sign the TV program was seen as dead by this point. And basing an advert for the monthly around Time and the Rani, it’s amazing the Magazine didn’t follow soon after. Apparently buying both these books will give you “The best of both worlds”. This is a pun that would be lost on most readers as, though the iconic Next Generation two parter had finished six months earlier in America, it won’t reach the UK until 1992 (February for the VHS, May for BBC2). Still, anyone who kept their issue till then will be able to have a good laugh at it.

Next week, literally two worlds as we cut between Earth and Cybertron!