A Spoonful of Sugar Helps the Medicine Go Down. 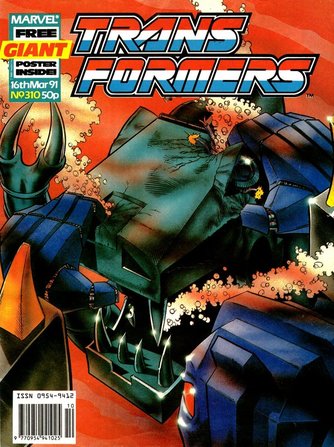 
We’ve had a strong run of Stewart Johnson and Robin Bouttell covers over the last year, but this issue’s “Grimlock helps a poor robot without hands pick his nose” look isn’t their best. Though as there’s no reference to 1960’s prog rock, I’ll at least be spared fans of the genre taking me to task for not knowing its classics.

As the new format beds in, we get a change to how an in media res American story opens. Gone is the title box and recap border, replaced by a cut and paste of the first part’s logo. It creates a more striking visual, and whilst losing the recap is something of a shame it does help the story look more stand-alone to anyone flicking through it in Smith’s.

We open beneath the new title card with Kup crossing a line on top of his actions in the first half. Rachatron has managed to beat his way past Kup security team (consisting of Sureshot. Remember Sureshot?), lock himself in the engine room and start tearing the place to pieces at exactly the wrong moment of the Ark attempting Earth orbit. 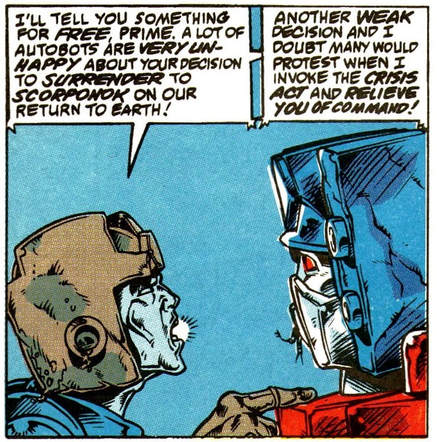 "I'll relieve you of command if you don't go get yourself killed"
Now, I spoke on the previous issue that stopping the hybrid without lethal force should not have been beyond the talents of Kup’s team. But now any sympathy over his own fear of Megatron goes out the window as he berates Prime in front of the troops, flat out says no one is happy with the surrender order and it will take only one more weak decision for him to invoke the (developed after Grimlock?) Crisis Act and remove Optimus from command.

Which means Prime then has no choice when Kup hands him a gun and says he has to kill the “Monster” himself. So the guy who’s number one job is looking after the Autobot leader successfully manipulates him into a situation where there’s a good chance he’ll be ripped to pieces (if you take the Rachatron threat at face value) to avoid a political decision he doesn’t like.

Once Prime goes into the engine room Kup does react to Sureshot’s plea that they really should do something for Ratchet after he risked everything for them with some sympathy, but it comes over as unconvincing and basically boils down to it being better to assume the disabled want to be euthanized.

Again, this isn’t bad writing, it’s entirely in-character for Kup (who when we first met him chronologically was quite happy to drift about until death from his own depression), but it does cast him and his motives in a bad light. 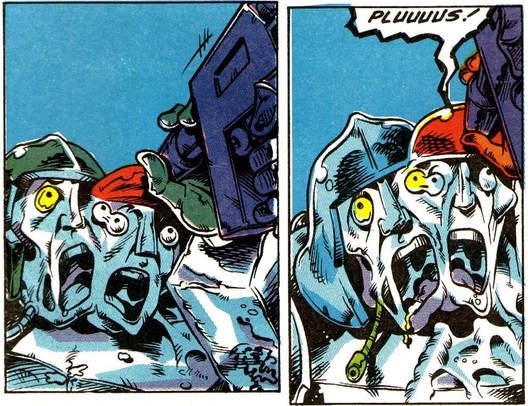 WHOSE HAND IS IT NEL?
Prime himself does successfully beat down Rachatron, almost as if he’s not really that much of a threat. Though it does do some more damage to the engine room we were told couldn’t sustain much more damage. But being Optimus Prime he can’t bring himself to shot an unarmed friend in the face for any reason. Until Ratchet grabs the gun himself and pulls it to his heads with a plea of “PLUUUUS”.

Well, I say Ratchet, though the voice comes from his side, on the panel where the gun is grabbed, Yomtov colours the hand as Megatron’s. Then two panels later it’s Ratchet. But hey, Yomtov is a busy guy, remember what colour he did something a whole two panels earlier is too much. But if you take panel one as the intent (as I’m inclined to by the hand being in front of Ratchet’s red helmet in the second, I think Nel couldn’t be arsed to do two colours for two objects), that makes this very much a joint choice between the two parties involved. All of which adds to the complexity of the issues involved, and leaves us on Prime seriously considering granting their request.

Which where we cut back to Grimlock, musing on the horrors he’s seen so far before he’s attacked again, this time by a sea monster robot that winds up crumbling to dust with a good poke. All of which leaves Grimlock more conflicted about whether this is the right thing for his Dinobots and if he’s just doing all this to get one over on Prime. 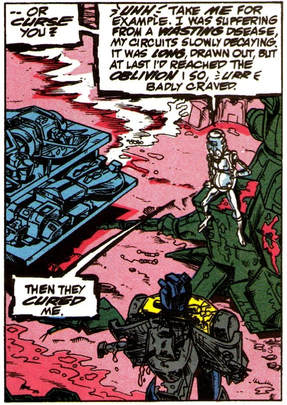 Buy the amazing Action Masters created by Nucleon!
Once on the island he meets the final ex-patient, a sad little robot who isn’t going to fight, but points out that every species of mechanoid is affected differently by Nucleon and so far all the results have been bad. He himself had a wasting disease that was cured, but all that’s happened is he’s now dying all over again in more pain, feeling each circuit burn out one by one. Will the Dinobots thank him or curse him? Which neatly ties the A and B plots together, at what point do you lose so much quality of life that death is the better option? A surprisingly mature and well thought out theme for the book to explore.

Grimlock decides the simple solution is to test the Nucleon himself by sticking his hand in it. With the result making him feel amazing. Which is where he makes his big mistake as he’s already been told that everyone who tried Nucleon was initially fine. The side effects only kicked in later. As the Dinobots weren’t going to get any more dead, at least waiting half an hour would have been a smart idea. But you sense he’s rushing things so he doesn’t have to think about his actions as he doesn’t even pause for a minute before lining his boys up for the cure. Making the dying mechanoid muse “Time will tell...”

Back on the Ark, we end with Prime seemingly vindicated in not pulling the trigger as Fixit’s examination of the Chief Medical Dictator reveals he can separate them. After the way he’s been spoken to by Kup, you can forgive Prime for turning on the troops in the room and demanding to know if his decision was “Weak” after all. But he’s spoken too soon as Fixit then adds there’s no guarantee what state Ratchet’s mind will be in, and there’s no way to save him without also saving Megatron (presumably medical ethics won’t let him just put a pillow over the Decepticon’s face after the operation). So in the face of complete disgust from his troops (including a mutinous looking Getaway), Prime makes the choice to carry on. Because for all his angst can be annoying in this period of the book this is one of his best qualities, once he’s decided what’s right he will stick to his guns whatever the cost. A determination that will carry on in to the next issue. 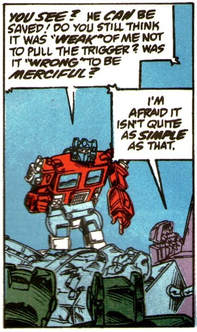 Fixit: Autobot Shit Stirrer in Chief.
This continues the strong start to this era of the series, with two character driven plots exploring similar, mature, themes that manages to ratchet (ha!) up the tension with minimal action needed. All in all, a bit of a masterpiece, helped by the now excellent Wildman art.

The cover promises us a FREE GIANT POSTER, which turns out to be the Jeff Anderson end pieces from the last Annual. Which is a cool piece of art, but it’s mainly there to soften the blow of the four extra pages added when the book went fortnightly (a fortnight ago) have been dropped already, along with The Enemy Within! (making this the first issue in close to two years with only one Transformers story in it). This presumably was a last second change as starting a multi-part reprint would be a strange thing to do otherwise, and therefore it’s another sign of the precarious situation the book was in at this point.

Transformation doesn’t mention the page drop or other any explanation for the loss of the second Transformers story. It does attempt to shut up G.I. Joe fans by saying the first of several specials continuing the story will be out soon, so can people just enjoy Machine Man please? Oddly it claims that Blaster first mentioned the special last issue, which is an odd way of reading “ya-boo to you”, so presumably this bit of text has been delayed for a few weeks. There’s also a reference to “Nurse” that will only make sense when you’ve read he letters page... 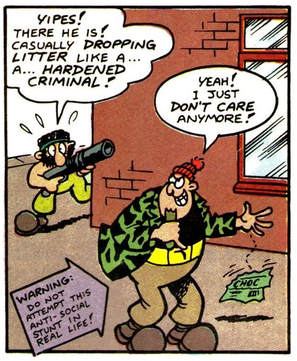 The dark age of comics has arrived.
AtoZ is an update on Optimus Prime in his Powermaster form. Though not the same one as from issue 177, instead using his Universe art with text that’s likely taken straight from that as well. It does have a mention of the Creation Matrix that I suspect was added by the UK team though.

Combat Colin has made the front of all the papers for turning to crime, which is hardly surprising when we see him do something as evil as littering on the street. The bastard. No wonder Semi-Automatic Steve feels he has no choice but to kill him. Not that he does a very good job as EVIL Colin easily overpowers him, much to the disinterest of passers by and despite Steve’s call for help from G.I. Joe and Timmy Mallett.

Luckily he’s able to pull of Colin’s new hat, returning him to normal. Also luckily the Bad Hatter is right next to them coming out of a Hat U Like shop. But will his razor-brimmed bowlers stop our heroes?

Blaster responds to Mark Caines of Droonfoot’s claim that Dwayne Turner’s art was better than Will Simpson’s by apologising to Dwayne for the comic having previously slagged him off and blaming the colouring for the art not looking quite right. Which may well have been an edict from higher up at Marvel.

Can't wait to read Death's Head!
Long time reader Nick Stokes of Bedford asks who the new editor is (how did they know there was a new editor?), to which Blaster explains they prefer to be known only as The Nurse.

That lad James Roberts is at it again, writing in with a list of what various Transformers creators are up to (as anyone who saw his tweets where he went through a drawer of old stuff knows, he was a reader of Comics International), including issues of She-Hulk, Robocop and the first mention that the next Geoff Senior drawn issue of Transformers is double sized. There might even be new Death’s Head! Blaster confirms Death’s Head is imminent and the art has already started to arrive at the offices.

None of this can beat Blaster revealing to Oliver McDouglas of Poole that his brother is Toaster (you remember Toaster, from Cold Comfort and Joy!) though. 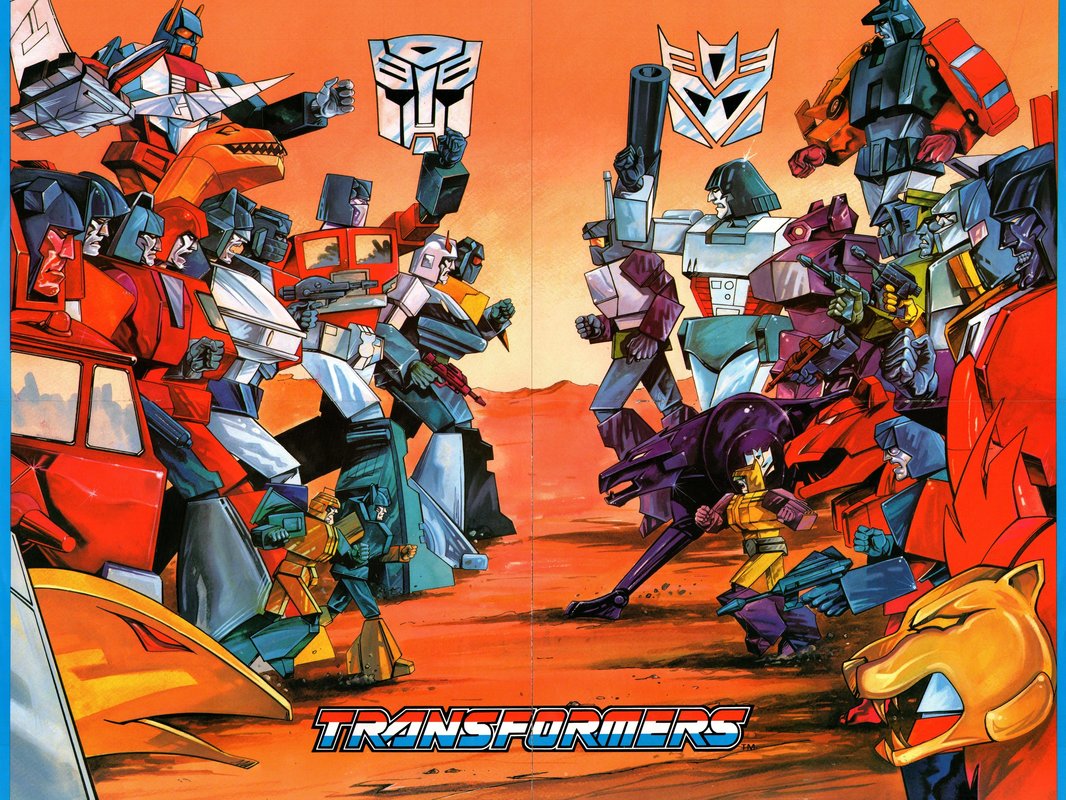