I Could Have Been Someone, So Could Anyone. 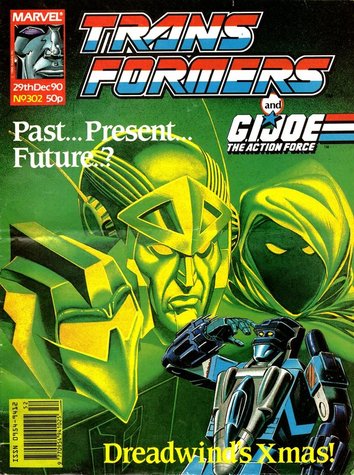 I Could Have Been Someone, So Could Anyone.


This week we have what may be the most unusual cover of the entire run, being given over to a gag one page story on the editorial page based around the letters page. Hence Dreadwind facing the looming ghosts of his predecessor and successor... plus a mysterious cowed figure.

The text story itself is uncredited, though it’s presumably the editor Harry Papodolous flexing his creative muscles. It’s also untitled, but if the cover wasn’t enough of a clue it soon becomes apparent which Dickens story it’s reworking. Of course, with only one page and a few 100 words it’s a highly condensed version of Kermit the Frog’s finest film, with all three ghosts showing up at once and with little to tell Blaster apart from Grimlock as they try and persuade Ebenezer Dreadwind to leave his office and go home. It also merges the Ghost of the Future with the grave of Scrooge for maximum compression as well. 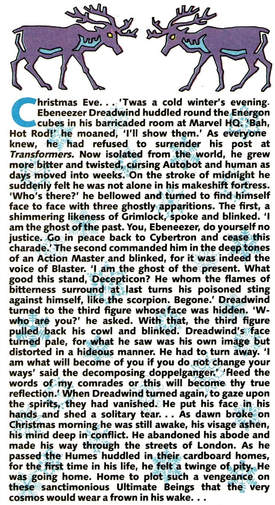 There's more of Galvatron about you than grave.
The odd thing though is the ending. After what is basically a gag retelling of a classic (complete with “Bah, Hot Rod”) that pre-empts Pride and Prejudice and Zombies by twenty years, the story concludes with a Dreadwind who has learnt his lesson walking the streets of London and feeling sorry for the homeless on the streets. Which is a bit of a strange tonal shift, especially as it then switches back to comedy with him planning his revenge.

It’s little wonder the sidebar, which takes on the normal editorial task, seems a bit baffled by the whole thing.

The new reprint of In the National Interest is rather fitting, not only in being a classic the Collected Comics haven’t touched yet, but by being a story with heavy human and political focus makes it an excellent counterpart to the new American story.

It’s fair to say we’re about to embark on what is considered to be the final golden age of the series, but before we can start that we have to get through the last real weak link: The Human Factor! From a British perspective, this being the last American story to be split into four awkward chunks likely adds to the perceived shift in quality, but when this is derided, it’s usually for one reason: Dwayne Turner’s art.

Turner seems to have been the victim of a behind the scenes struggle, with Delbo gone and Senior not wanting the gig, Furman had pushed for Andrew Wildman to come across the Atlantic. However, even though it was proving hard to find a new regular artist, editor Don Daley was not wild on Wildman’s art. This debate therefore resulted in what would become the one-off work we see here. 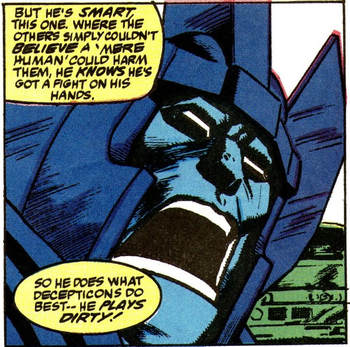 Whisper having a bad face day.
The speed at which he had to draw it may well be a factor in the generally well regarded Turner not doing so well here, but the end result is what is comfortably the worst art on the entire series. The robots can often be a struggle for artists unfamiliar with them, but here not only do the Transformers look like odd smears, the humans look terrible. Especially G.B. Blackrock who has a hand that is literally all thumbs.

But it has to be said, the art is rather a scapegoat and the real reason this is our last really poor story is the introduction of the only drag factor on the remainder of the series: The Neo Knights.

As was the case previously on the British book, Furman is getting itchy feet at this point to move on to the next stage of his career. Indeed, after more than a year of paying his dues work on a minor toy tie-in verging on cancellation, it must have been frustrating that no other US work had presented itself. So he decided to repeat a trick from Death’s Head, to create a character (or rather characters) who can be spun-off into their own series if they prove popular.

The problem is, the creation of Death’s Head was, at least initially, fairly organic and was a character that played to his strengths as a writer. Here, much as with the GO USA! ending last week he’s working against his best instincts to try and cater to the American market. So here he has decided to create a mutant team of superheroes with stock personality of feisty woman (Katrina Vesotzky) and Wolverine (Lee Gruber) feared and loathed by a world that doesn’t understand him (a mystery oil refinery worker). They are dull, clichéd and hugely uninteresting and this entire opening part is given over to setting them up. The fact no one wanted a comic with them in is no surprise (and we’ll talk about how awful the pitch for their own book was at a future point), and frankly makes Furman look a bit out of touch with the American market already. 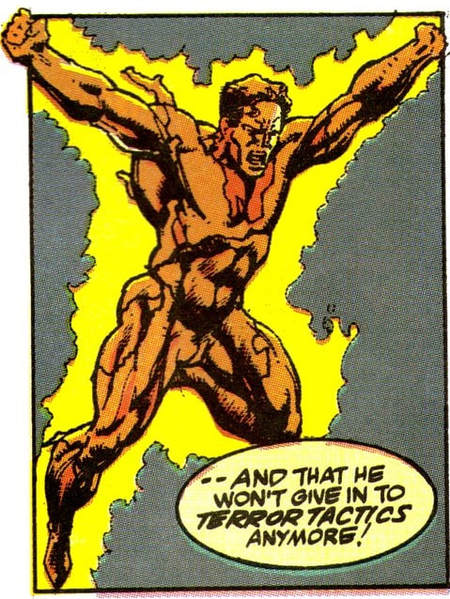 More like Neo Shite.
Indeed, it’s hard to think of an issue with less going for it, being nothing but a long exposition scene. It’s nice to see Blackrock again for the first time in three years (what Joe crossover?), and whilst it’s arguably a step down from being brainwashed by an EVIL carwash, the idea of him having had enough of being a bystander and now running with the government to replace RAAT is a good one, and picks up on threads that Bob had long forgotten about. It’s just his decision to fight Decepticons with superhumans that doesn’t ring true.

There’s also a weird timescale issue as he claims the Air Strike Patrol attack on MacDill airbase in Furman’s first US story was only a month ago. That’s a lot of adventures to fit into four weeks, and especially makes Matrix Quest seem rather small.

The gist of the plot here though is that a scared mutant fought off the Air Strike Patrol when they attacked an oil refinery (the stock Decepticon plot, a sure sign of a weak story), killing them, but causing a massive explosion in the process. Obviously a scared unstable guy who can’t control his powers is what you want on a crack government team, so G.B. sends the two hobos he’s already picked up to investigate. All in all, an ugly snooze fest that does very little to make you like the new humans and rather dies a death on the page.

Outside of the editorial, Christmas is mainly covered by Lew Stringer. As the dimensional monsters start to attack Colin and Steve... a massive amount of snow falls out of the sky. And as it only snows at Christmas in comics, that calls for a Christmas truce! Complete with swapping presents (one demon gets a nice jumper), playing football ala World War I and watching the Queen’s Speech, with her being very annoyed at the viewers falling asleep. Sadly the snow melting means the end of Christmas and the fight resuming... Which makes for a great bit of festive fun. 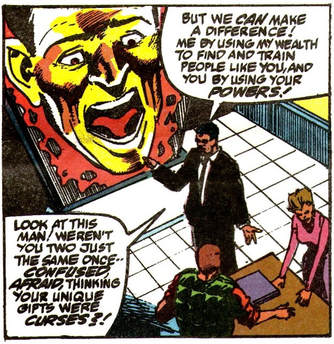 Would you buy a comic with these guys?
Blaster is pleased to get a letter addressed to Dreadwind that is another list of Action Masters, this time from Owen Fisher of Windsor, which means a third of a page gets filled up nice and easy. Blaster also passes comment on the cover story, wondering if it wasn`t a bit melodramatic at the end.

Paul Owen of Chorlton gives us a glimpse into the behind the scenes issues on the book at praise for Staz’ covers from issues 290-298 has Blaster reveal the artist helped with a difficult editorial transition. This not only gives us a better idea of when that switch happened, but my good friend Ryan Frost takes it to mean that Staz actually edited the book briefly during this time. I’m more inclined to think it just means that him drawing so many covers so quickly was a help at a tough time, but either way it shows that there was some sort of shenanigans going on in the office at this time.

Meanwhile, James Beech of Boston is worried about how much Prime is getting battered about these days, to which Blaster tells him things are only going to get worse... 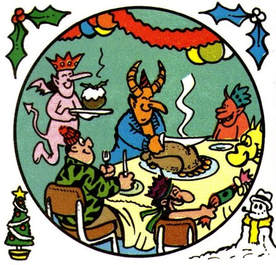 And a merry Christmas to those of you at home.
Our final G.I. Joe: The Action Force story, Alliance of Convenience (from issue 74 of the parent book) sees some odd characterisation of Fred and the Baroness as the former ignores her advice and has her attack Serpentor’s position even though it’s a doomed venture and she puts up with such an idiotic idea. No wonder he seems to be losing the Civil War.

Which brings us to the end of the final year where the book is weekly throughout. Though with the Joe crossover and some of the weaker stories it’s remarkable it’s gotten this far to a certain extent. Changes are a coming and they’re coming soon. 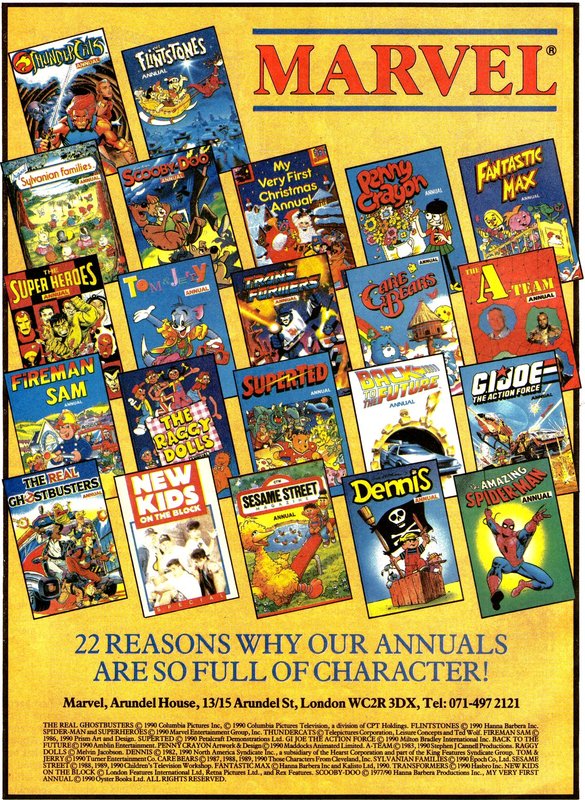