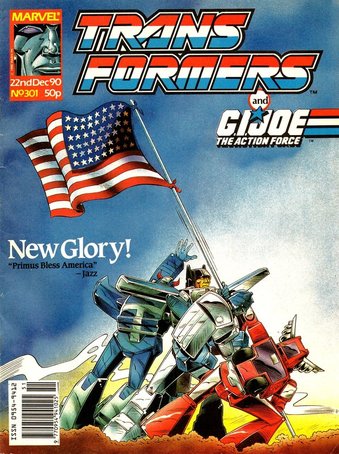 
We get a gorgeous cover this week, as Staz and John Marshall collaborate on a new style that will create a run of painted, moody and memorable images that are usually inspired by some real world reference. Here, the famous Iwo Jima photograph is reinvented as the Autobots raising the American flag, complete with “Primus bless America” quote from Jazz. Which rather gives away the ending, though in this instance it’s such an unlikely twist I doubt many readers would get it from the cover. It also perhaps shares one of the problems the lead strip has as the British never do that very American jingoism very well.

However, as an image it’s striking both in itself and in terms of how much more mature (in the grown up sense rather than guns and tits) it is that the attempts to be down with the kids the rest of the packaging of the comic is aiming for under the new editor in an attempt to claw back readers.

Art is also the main concern of the interior, as we say goodbye to Jose Delbo. It’s three years since we first encountered him at the end of 1987 with Sky Lynx and those bloody kids, making him the longest serving American artist, but quite some margin. Perhaps it’s telling that, whenever you see visual homages to the Marvel series on other covers or as part of a flashback in the IDW material or even as fan art, it almost never apes the Delbo style. He’s quite easily the least likes of the major Marvel artists. Often unfairly, even if after a strong start on this story there’s a sense he was rushed for time by the end of it, with the brief bits of action rather a confused mess. 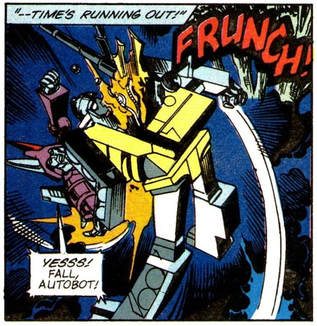 Does this count as a Delbo Pose?
However, he still had many a good day and often excelled when asked to draw something outside the usual Transformers box, with insane monsters, mad robots and dream sequences all playing to his strengths. And even on his off-days, he likely did better than he had any right too considering he clearly wasn’t given the same level of reference material as previous artists, having to make do with the front view only Transformers Universe for character designs rather than the full models. Not to mention that for the first time since the earliest days of the British stories he was having to just draw the toys for the newer characters. And when those toys are the Triggerbots you’re probably buggered.

Still, he successfully worked through the transition between authors and has given many memorable moments, with his likely highlight being the insane Starscream of Dark Star. It’s just a shame we don’t get a proper Delbo Pose this week (I believe his last was a panel of Cyclonus in the previous issue), though both Chainclaw and Jazz technically adopt it, they actually are being attacked so hard as to have their chests detach from their waists so they probably don’t count.

It’s a good thing that the art provides a talking point, as the story itself rather peters out. Which is rather a standard problem for this sort of story, having established a dark alternate history going back years, in order to provide any sort of resolution within the page count, it has little choice but to go for what can only seem a bit of a cop-out. 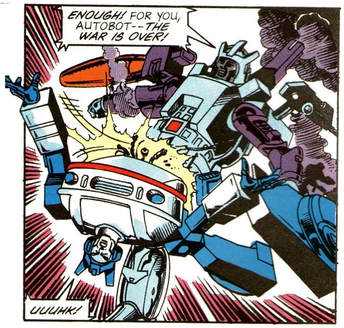 Or this? either way, from here on in, the posture of all the Transformers will get a lot better.
There are however two very good moments that top and tail the issue, both involving Galvatron. The first sees Chainclaw get the drop on Cyclonus (who, as noted, has just killed Guzzle. Getaway probably got away, the sneak) and about to make the killing blow before Galvatron intervenes. Which leaves Cyclonus pitiably grateful... before Galvatron kills him anyway. It turns out he has a very low opinion of a Unicron created being letting a rubbish Pretender best him in battle.

Which creates an ironic echo to the end of the issue, as Hook, Line and Sinker arrive from our reality after their trip that started in issue 294, easily overpower Galvatron and whisk him off back to our Unicron. Which makes it Galvatron’s moment to be pitiable, as he first objects to Unicron betraying his servant (which gets dismissed as “Different Unicron”, suck on that “There’s only one Unicron” people like...erm...Simon Furman) and then starts moaning about how this isn’t fair like a toddler being told to sit on the naughty step.

This also helps to negate the silliness of the middle part of the issue as losing Galvatron would surely be a serious blow to the remaining Decepticons and would allow the resistance to press ahead and win, which is what Prowl, Jazz and (getting to the end of a Marvel comic for the first and only time) Inferno rally round to do with their human allies. It’s very nearly uplifting. 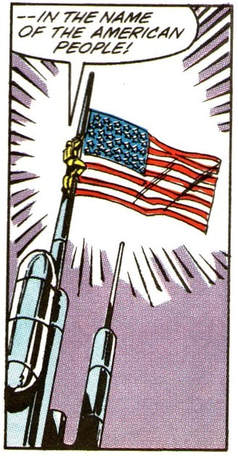 Thoughts and prayers.
The issues are all to do with Spike’s secret weapon. The thing that will stop Europe nuking the United States in another of those All Hail Megatron precursors (though Furman himself would also riff on it for his Titan Movie comics). Which, after a dangerous climb to the top of the energy grabbing McGuffin that has killed the bulk of the remaining Autobots and very nearly killed Jazz as he tries to provide a distraction (and how you know the story is running out of steam is that Jazz’s “Better to fight and die...” speech is 98% Furmanisms) is... to hoist the American flag atop the Decepticon base as a sign that the US is still fighting and shouldn’t be bombed.

The problem is we see inside the European Crisis Coalition and know they’re watching the battle via satellite. They know American is still fighting. And though they claim a victory is what’s really needed, I can’t fathom they would decide the stars and stripes was enough when the bulk of the resistance is killed to try and achieve it. If anything it should accentuate the need to strike now as if not for the three amigos showing up (after the decision to abort is made) the three remaining Autobots wouldn’t stand a chance and at least the absorption thing has been disabled at this point.

It all feels very much like a British author trying just a bit too hard to hit the style and tone of an ‘80’s American jingoistic action story without having their heart in it, because all that Rambo stuff is a bit silly really, isn’t it?

Still, despite falling down a bit at the end, this has overall been a strong dark story that I suspect will have stuck in the minds of a lot of readers. Just a pity it didn’t quite wind up flying the flag for the series.

Harry Papodolous was certainly a bit eccentric.
Transformation sounds rather dismissive of the American strip, claiming the Hook, Line and Sinker ending is “Hard to swallow”, before spending more space talking about the conclusion to The Legacy of Unicron! It oddly then starts using a horse racing analogy to insult the G.I. Joe backup, “Just meeting the last fence, at least twenty lengths behind the two leaders...”. You can tell we’re nearing the end of the Joes association with the book.

The sidebar attempts to big up Christmas is rather desperate, making it sound like we’ll be getting a full Dreadwind story next week and carefully not mentioning the strips in the Annual are reprints.

Combat Colin starts a new story, where for once Lew Stringer has created a proxy of a Marvel character rather than just using them. Which is at least makes the modern reprinting easier to handle legally. Here Dr. Peculiar, who you can tell apart from Dr. Strange by the corn circle in his beard, accidentally summons up a horde of angry demons that them flee his castle, leaving him hoping no one will notice them.

Sadly the first thing they do is attack a bored Colin and Semi-Automatic Steve, and Colin’s handy Demon Disintegrator gun has no effect! The real horror for a Transformers reader though is that the popularity of the Turtles has reached even here as Steve shouts “Bungacowa dude! (or something like that)”.

Darn’N’Blast gives us our first Blaster Fails to Answer Questions Properly, which will hopefully not be a prevalent a thread as it was for his predecessor. James Gale of Pollock asks where Jetfire is, to which Blaster assures him the flyer is waiting in the wings, rather than being dead. Gale also runs a gag through his letter of Dreadwind constantly interrupting him with threats about taking his page back (“GIVE ME AND HI-TEST BACK OUR PAGE OR STEELJAW AND CO. GET REPLACED BY KYLIE MINOGUE AND DES O’CONNER TAPES!”), to which Blaster has to sheepishly admit basically does the gag of next week’s Christmas story in less words. 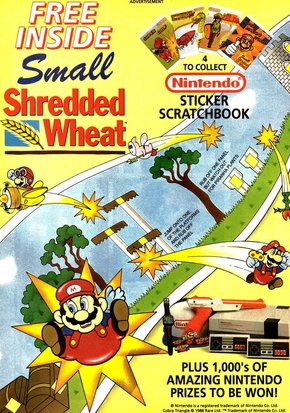 It's a me, Mario!
The final part of the penultimate G.I. Joe: The Action Force story sees Dr. Mindbender survive the attempted assassination attempt thanks to the MAMBA Fred has sent after him running into the one G.I. Joe are using to infiltrate Cobra Island. Which confuses the hell out of everyone except Mindbender, who doesn’t remotely care. The issue ends with Captain Minh (remember him?) setting up a plot pay-off I don’t think we’ll be seeing as he spots the Joes landing, whilst Destron has his private army working out really hard on his yacht as he watches. The kinky sod.

Next week, it’s Christmas! Complete with art that’s the equivalent of your nan giving you socks that you didn’t want. 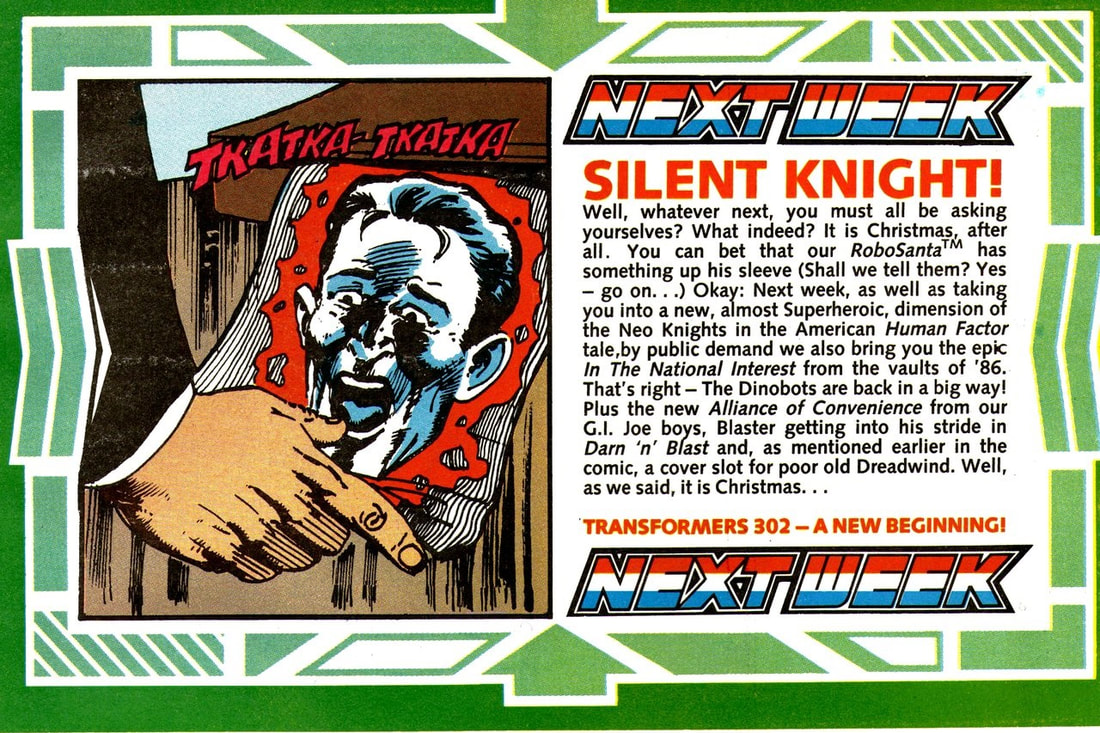