The Power of Love, a Force From Above. 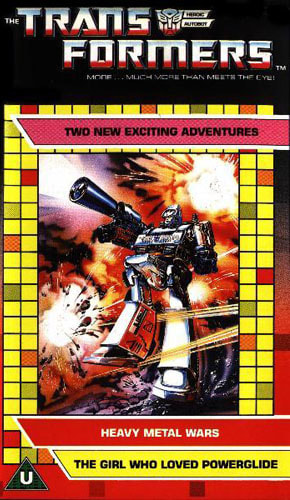 
Your new orders are...err...clean up this mess!


For people who grew up in the DVD age, exactly how videos of TV shows, especially cartoons, used to work must seem very strange. It might be spread over several volumes rather than a boxset, but if a show is generally a success you can be reasonably sure it will get a variety of disc releases with several episodes, if not the whole series. Indeed, it’ll stand a good chance of being on Netflix now as well.

However, back in the 1980’s, things were different. For a show like Transformers, the real target was the rental market. Parents grabbing a tape from their local Choices with the specific intent of shutting their kids up for half an hour so they can get some much needed peace. Meaning you could cheerfully release the same handful of episodes over and over again in different packaging without having to make much effort beyond occasionally shifting the exact contents of each tape.

Of course, Tempo video were also restricted in what episodes they could get from Hasbro/Sunbow, who seem to have actually put some thought into making sure key toy promotion episodes from the two seasons not shown in full in the UK got the lions share of the attention. But amidst the obvious stories introducing combiners and Headmasters, there were a few outliers that seemed a very strange decision to include if you weren’t doing the whole series. And probably the oddest of these was The Girl Who Loved Powerglide.

The odd thing I discovered in researching this, was that this episode was only released on video four times (once by itself, twice with Heavy Metal War and once with Call of the Primitives). As a kid, it felt like this episode was on every single tape. Which was annoying because, let’s face it, to a small child, the last thing they’re interested in with their favourite action cartoon would be a soppy love story. Presumably it was picked for its heavy role for the Coneheads (I doubt they’d specifically want to pimp a minibot), but it was never going to get the juices going in the same way as its tape partners.

Revisiting it as an adult, this is very much an episode that is both better and worse than I remember it being. In the better side, David Wise generally writes very witty scripts and there’s lots of smart humour in this story of Powerglide protecting an heiress with an important McGuffin who can also break any machine she touches. There’s no shortage of great zingers, my particular favourite being the send up of SF mind probe scenes where Megatron boasts of the extraordinary power of the psycho-probe, only for Astoria’s jinx power to render it completely useless, to the point that Soundwave has to sheepishly claim “Subject’s mind completely empty”. 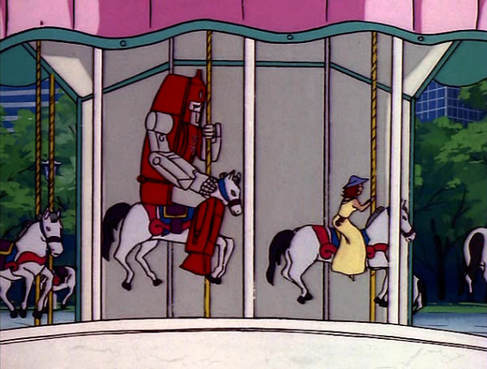 A highlight.
There’s also a nice surreal streak to the episode as well. The much mocked (especially by me when I was eight) scene of Powerglide riding a merry-go-round as he has to guard the human is actually a brilliantly funny visual image that subverts the usual butch testosterone drenched nature of the series very nicely.

Outside of the issue I’ll talk about in a minute, we also get some decent back and forth banter between Powerglide and Astoria as they aim for the Cary Grant/Audrey Hepburn vibe. They don’t quite hit that level of course, but then who does? However, the “Argue argue kiss kiss” cliché is played reasonably well. There’s also an absolutely hilarious scene of Spike attempting to flirt with Astoria and totally failing because she’s into giant robots.

The actual action part of the episode is also much better than I thought as a kid, with some nicely staged fights between the Coneheads and Powerglide, plus a nicely staged climax on the Decepticons orbital platform as the Autobot rushes to rescue the girl who loves him from her captors. And of course, the scene where Powerglide makes the platform crash into the underwater Decepticon headquarters, complete with panicked exchange between Megatron and Soundwave (“energise the force fields!” “What force fields?”) is pure comedy gold.

Overall, if not for the elephant in the room, I’d say this was an overlooked sitcom classic from the series. Unfortunately one big thing lets it down: The sexism. The episode starts with Powerglide being confused the Decepticons would want to kidnap “a girl” because there’s no way she could be an important scientist or board director at her company. And it gets worse from there because the entire gag of the episode is she really is too dumb and useless to be more than a token figurehead.

The love/hate relationship between her and Powerglide also crosses the line more than once, culminating in him chucking her across the room in a ridiculously violent way when she doesn’t immediately do what he wants. It’s lucky that G1 cartoon humans are more indestructible than Captain Scarlet.

The only really amusing side to this is that is was Powerglide of all characters who got the “Women should be treated as if they were equal” unbroadcast PSA.

It’s a shame this drags down the episode, meaning I can’t leave it with my heart glowing like a LED display (which again, fuck it, is a good silly gag), but it’s still an episode that has aged far better than I would have expected and shows the cartoon might well have been insane at times, but was still more varied than it is often given credit for. 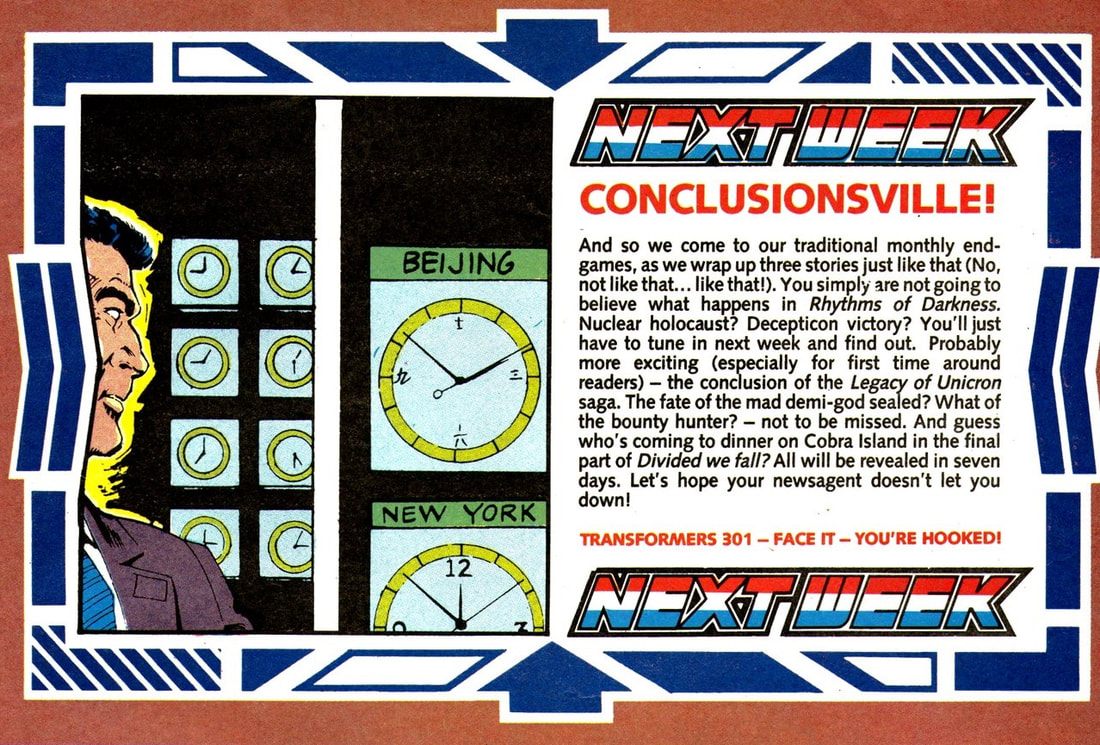