Every City’s Got ‘Em, Can We Ever Stop ‘Em? Some of Us are Gonna Try. 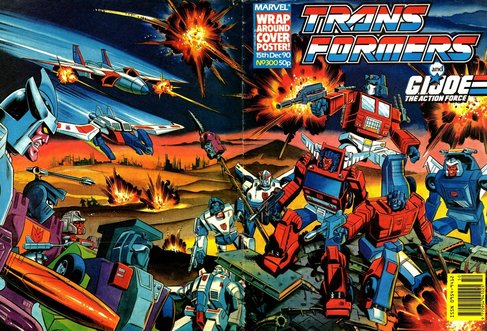 
We destroyed, we annihilated—we had a good time!


300 issues. That’s a pretty hefty amount for any comic to make, let alone a licensed title. We’ll certainly never see it happen again with a Transformers book. And it is of course, the last Big number the British series will reach as we hurtle towards the end.

Presumably because things are starting to wind down, the celebrations are rather more muted than usual, effectively being limited to the wrap around cover from Staz (painted by John Burns) and Combat Colin. The former is, Powermaster Prime and (oddly and looking sheepish as if he knows he’s out of place) Windsweeper aside, given over to 1984-1986 characters. Most of whom are in shops now Action Masters, but it still feels like a statement on when the golden era of the franchise was.

The exceptions are Galvatron, and Ironhide’s head. Said head being cut off and stuck on a stick like there’s a Visionary about.

Inside, it’s perhaps a shame that, as the weekly format is doomed anyway at this point, they didn’t drop G.I. Joe or the reprint (reaching the penultimate part of the Unicron story) and presenting a double length conclusion to the current story. As it is, this third part is mainly about moving the pieces into place for the finale next week, rather than trying to be outstanding in and of itself. 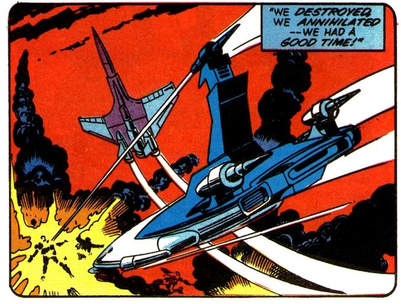 Scourge clearly likes to look you in the eye when he kills you.
That doesn’t mean we don’t get nice moments though. The opening with Cyclonus and Scourge (with nothing in their dialogue this week that would contradict the backstory American readers would assume they have) is fundamentally devoted to exposition: Galvatron has a fancy shield around their base that will both protect them from the nuclear missiles that will soon be heading their way and absorb their energy to give the Decepticons enough energon to do what the hell they like.

This is however crouched in some nice character work, where the two are bored out of their tiny minds and reminisce about the good old days (after Unicron gave them Earth as a gift) where they got to kill and destroy things on their slightest whim rather than sitting and waiting for a trick to be pulled off. This slightly melancholy looking back feels very appropriate for a series that has very much passed the peak of its public popularity.

It’s also bad luck for the Decepticons, as Spike and newly revealed surviving Autobot Getaway are watching from the woods. And if there’s one thing that pisses off Getaway, it’s the idea of a happy Cyclonus. Meaning he becomes so enraged he attacks ahead of schedule (the plan being to let the two most powerful of Galvatron’s troops go by first), meaning the Autobots have to scramble to get started unexpectedly.

Which gets several of them killed. So well done Getaway. 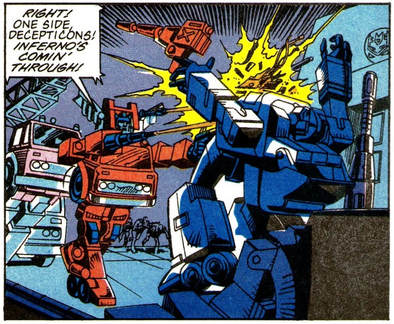 Do not mess with him.
First down is Crossblades, who in attempting to take down the forcefield is wing clipped by (a talking!) Laserbeak, meaning he sacrifices himself by crashing deliberately into the shield generator.

Not unlike Inferno in the reprint three weeks ago. Though Furman wouldn’t have known they’d be printed so close together.

Speaking of Inferno, he shows the reason he wasn’t allowed in the American book until now is that he will fuck you up, barging in through the open shield and taking down Decepticons like the biggest reddest bastard you ever did see. Which gives us our cliff-hanger of Spike preparing to climb up the energy syphon to unleash a Secret Weapon as the Autobots buy him time. What can it be? The NEXT box promising us “Stars and Stripes” rather gives us a clue.

Transformation is mainly just relieved to be here, with the main focus being in the sidebar, as it reveals Dreadwind has indeed barricaded himself into his office (Hi-Test having gone “Back to Nebulon”) and won’t come out. There’s an awful lot of set up being done for what will be a very short and throwaway bit of fluff in two weeks time.

Sounds like an ex-boss of mine.
The extreme advance notice means Blaster (in a temporary office) has letters addressed to him right from the start. And everyone seems to have decided, either because of Blaster’s personality or because it’s 1990, to talk like Bill and Ted. Indeed, the first letter from Mark Henry of Chichester rather sets the tone by being all in rap. Though the real sign of the times is it being given over to how rubbish Action Masters are, but Blaster is cool enough to allow him to put this hate aside.

It’s the response to Kevin Smith from Aberporth asking about the aforementioned Action Masters that’s the most interesting as Blaster’s explanation is taken almost word for word from Budiansky’s pitch for the concept that was included as an extra in one of the Titan trades and may well have been his last contribution to the franchise. This has Optimus finding Nucleon in a black hole and using it on his troops to make them “stronger...faster...more ALIVE” by changing their figure alteration systems (no transformation cogs here) into energy storage reactors and taking their ability to change away from them. As it is focused on his own origin it doesn’t go into the Decepticon part of the pitch, but Blaster at least has the good grace to claim to be from an alternate future (presumably to cover the whole not being dead thing), meaning this can be considered a valid alternate continuity if you want it to be.

He also promises his Action Master partner might be in the book at some point, though after the Hi-Test experiment failed, this will never happen.

The debut Darn’N’Blast then ends with a letter from Poland that is mainly presented because Burski Mariusi of L. Okulickiego has been sending a lot of letters in to Dreadwind that no amount of Nucleon can translate, so Blaster is hoping someone will be able to help. Despite my own Polish blood, all I can say with a reasonable amount of certainty is it was intended for the Stock Exchange, with the still in English Prowl as one of the wants.

Well, that makes sense.
Or one of the swaps.

At long last, and only a few weeks before Christmas, we get an advert for this year’s Marvel Annuals. Transformers is in there of course, as are the usual suspects, plus Penny Crayon and New Kids on the Block. The ‘90’s really have arrived.

The third part of the G.I. Joe: The Action Force story sees the Cobra Civil War start in earnest, with Cobra Commander taking the initial advantage and forcing Serpentor to retreat and set up base on a beached ship. Which gives us some fun material of his conflicting personalities fighting within his mind. But the real highlight comes as Dr. Mindbender points out he has the Black Box and they can use it to make a deal for help from the US government, at which point we cut to Fred and the Baroness watching this on a spy camera whilst eating popcorn and having a good laugh about it all. Before Fred decides Mindbender shouldn’t make his attempted rendezvous...

Combat Colin is back in colour and the main celebration of 300 issues as he and Steve decide to take the day off to celebrate. But outside the Combat Shed, all his main villains (led by the Amazing Dave) decide to take advantage of this holiday to take out our heroes. However, the Combat Boxing Glove Gun takes them out with one punch because Combat Colin is never off-guard. And really he deserves more than one page, right? It’s time he took over the comic!

Sadly this is the point Blaster shows up and—in the last appearance of his Budiansky personality—quickly threatens Colin into meekly giving up any such ambitions. But a man can dream, can’t he?

Of course, 300 issues means 300 weeks of Transformation. This wouldn’t be possible without all the people out there reading it, and each and every one of you that comments or tweets or buys a book are all very much appreciated.

And I promised you an announcement about the future didn’t I? Yes, I have now decided that come the point when I’ve covered the entire classic run of Transformers UK comics ending with Fleetway’s Generation 2, I will be going further into the future, starting with Panini’s Armada comic and into the Titan film stuff and beyond (though I’m afraid I draw the line at more than an overview of the screengrab comics). How far I’ll get into this will depend on what point people lose all interest (and I doubt there will be enough to make a fourth book likely, but we shall see), but overall there’s just about another couple of years worth of material to cover. It truly never ends.


But long before we reach the revival of Transformers (and in a change from my announced schedule from last week, due to me not being able to find the previously on YouTube How It All Began Turtles video couple with me being down with a bug), let’s celebrate the triple centenary with a look at one of the evergreen staples of the VHS range. 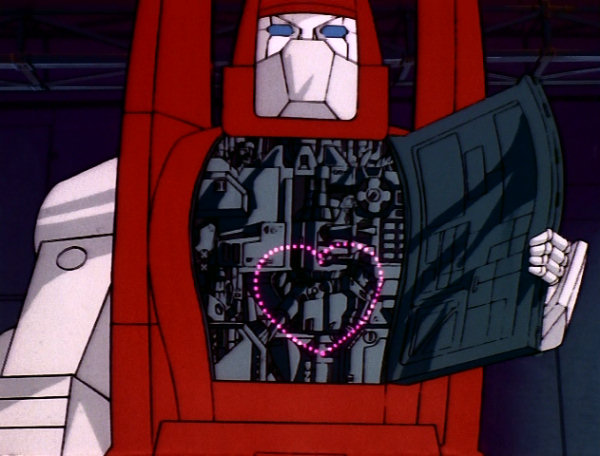