Though We Die, La Resistance Lives On. 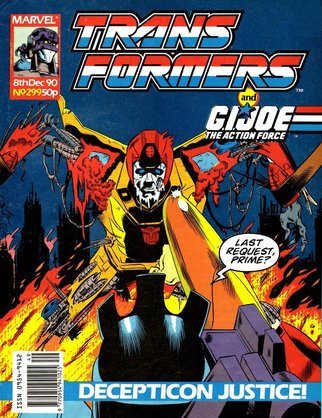 
Curse you Rodimus Prime, how many times must I destroy you?


The John Marshall and Stewart Johnson cover this week is rather nice, in that it gives us a money shot the comic itself doesn’t quite manage to deliver: A good look at the rotting corpse of Rodimus Prime before Galvatron destroys it.

Prior to the desecration of Rodimus though, we get an even more horrifying moment in the death of Icepick.

Icepick, you know Icepick! The much beloved Pretender Monster who made his iconic first appearance last week? Sadly he walks into a human built boobytrap that makes a building fall on him. I guess the new 21st century style Pretender shells aren’t up to much.

His sacrifice does however let Furman bring one of the character beats he gave Galvatron in the volcano story back to the fore for the Americans, his obsession with Rodimus Prime being behind everything. So he angrily interrogates the strung up corpse of the former Autobot leader and accuses him of having taught the humans how to fight. All before losing his temper and blasting the body to bits in a sequence that is both creepy and unsettling. 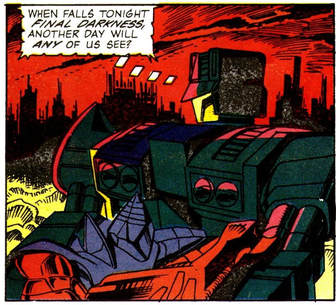 Slog, we shall remember you.
In what may well be the least likely moment of Furman’s entire American run, Slog (you know Slog, the Pretender Monster) has a melancholy three panels of wondering whether their leader’s insanity will result in all their deaths. Which is nicely done, and would be basically all she wrote for the Pretender Monsters for this century.

Of course, you can’t do a dark future story without showing the resistance, and with Galvatron's trip to New York having been a planned distraction we cut to what is left of the Autobot army as they try and cross a highway full of smashed cars as they approach the Decepticon base. Said survivors being an odd mix of forthcoming Action Masters and toys that are a couple of years old. So we get Chainclaw, Guzzle, Inferon, Prowl, Jazz and Crossblades. Plus Spike Witwicky and a new human character of Lisa. 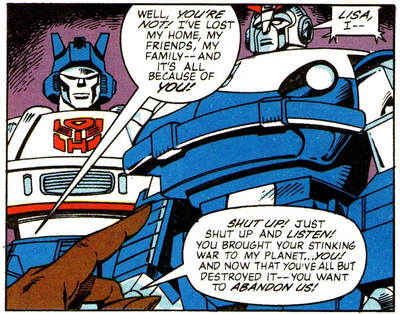 Who is the better new character, Lisa, or Slog?
As if par for the course with these things, they debate the worth of carrying on with their plan when they are so few left and so many dead (including Kup and Blurr), which is a neat way of handling the exposition about the “Unicron won the film” backstory. It also shows us what a last, desperate grasp for any sort of victory this is, before what’s left of the world nukes New York (more shades of All Hail Megatron). It’s standard stuff, but it’s nice and tense and the Autobots utter sense of defeat is well conveyed (though this is already becoming a Furmanism heavy story, “Over—finished!”), as is the humans “We still have a planet here, so pull your shit together” argument that brings them around.

This is also key in that, to be blunt, the plan we’re going to see unfold is very, very silly, and it’s going to kill a lot of characters who have managed to stay alive in this world for four years in what only be called a rapid way. This would be nothing but farcical if the story didn’t hit us over the head with the fact that they have exhausted every other option and this is a full on suicide mission they don’t remotely expect to work. And their time is running out a Galvatron is heading home... 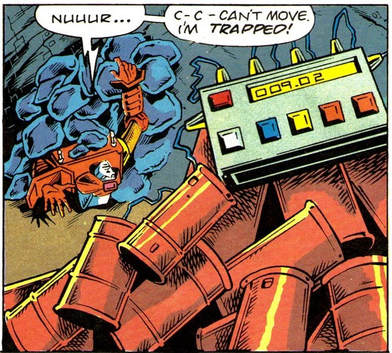 Not quite the same, is it?
The first half of this is stronger than the second, with Galvatron remaining unnerving and Slog being a surprisingly effective little character. The resistance half is necessary and moves the plot forward, but with just slightly more depressed versions of the characters we know it doesn’t hold the attention quite as well. Despite that, it remains a strong read. And hey, it’s nice to finally get Inferno in an American story.

Transformation (which for some reason puts the titles of stories in a different colour this week) is so excited by the contents and the last Dread Tidings it can’t even finish the odd drinks related running gag, having to make do with a “Make mine...” This leaves the sidebar to promote issue 300 and the arrival of Blaster. Not to mention planting the idea that Dreadwind might be hard to remove, helping to set up this year’s sort of Christmas story.

The reprint gives us an unexpected final bit of new UK created content, as the dialogue at the end of Part 10 (originally the end of Part 5 of course) has been changed. Originally Wreck-Gar weakly asked (after being buried in rubble) “T-t-to be continued?” leading into the NEXT box declaring “IN FACT—TO BE CONCLUDED!” Obviously, with there now being two parts to go rather than one, the latter had to go (becoming “JUNK LAID WASTE!”), but it’s a shame the still perfectly valid meta line from the Junkion has been changed to “C-c-can’t move. I’m trapped!” Which rather shows whoever subbed that wasn’t a writer by trade as it’s not really in character and sounds rather limp.

A better exit line than Blaster will get, to be fair.
The final Dread Tidings starts off on a low key level, with Hi-Test saying a small goodbye at the end of a letter asking about, amongst other things, the fate of Irwin Spoon (working for Rupert Murdoch now apparently) from James Beech of Boston. And in a sign of how the gimmick of the shared page never really worked, they forget to colour his reply in his own colour for his final letter.

Dreadwind however, again setting up Christmas, goes right off the deep-end as Luke from London suggests radio controlled Transformers and uses Metroplex as a threat. The Decepticon is tired of having to shift through all these letters, but despite this he’s not going quietly and is barricading himself within the office. This will end well...

G.I. Joe: The Action Force starts to hit its stride in this new arc as we get the old reliable standby of Cobra Commander and Serpentor arguing tooth and claw in the most silly and childish was possible, all whilst the confused Strato Viper wonders why he’s not being greeted by a proper parade for bringing the Black Box to Cobra Island, and indeed why the box is just churlishly knocked out of his hands whilst he tries to hand it over. Mindbender has the good sense to grab the box before the Baroness, but it’s basically of no use now the Cobra Civil War is gearing up.

As with the lead strip, cutting to the heroes is a little duller as we see the Joes arrive at the U.S.S. Flagg to prepare their raid, but overall this is a strong as the backup has ever been.

Combat Colin ends his current adventure with the tone becoming even more serious as he and Megabrain arrive on a destitute landscape... and find it’s the future after war and disease has wiped out mankind and left Wallytown (with Colin changing the population on the town sign to “Zero” in an especially macabre touch) in ruins. It’s in this destitute future that Colin leaves Megabrain to return to the present... with the alien screaming for him to come back being our last sight of him. 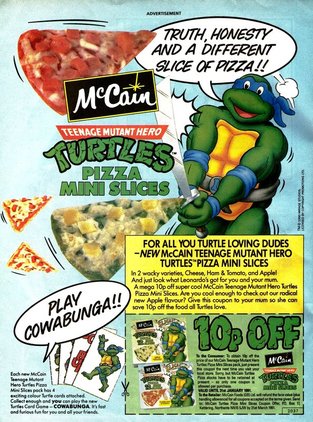 10p off your disgusting pizza.
Back in the present, and free of mind control, the other aliens leave as they think Earth is a bit wretched. We do end on a gag as Steve is crushed by the giant “Get well soon” card the Giggly Sisters have gotten him. With the darker and genuinely dramatic tone to a lot of it, this hasn’t been a typical Colin story, even beyond the absence of colour. However, there’s still been a few belly laughs and Lew Stringer has pulled off this change in mood surprisingly well. If anything it perhaps reflects the direction he’ll take in his Sonic: The Comic work.

There’s two adverts of note this week. The first shows the continued growth of Teenage Mutant Hero Turtles as you can now buy individual pizza slices endorsed by them, complete with 10p off voucher. Including an apple one. No, not the ever contentious pineapple. Apple. Which is snot green and looks revolting. But then, I’m assured by several people who did try them that every permutation was equally disgusting.

The second shows the ‘90’s have truly arrived. The Raleigh Extreme bike... “First it was extreme...now it’s even more extreme!” Which sounds like it was written by someone’s dad who has never been extreme in his life. A year later it would probably be “X-TREME”. Still, if you buy it from Halfords you get a no doubt extreme fluorescent green rucksack.

Next week, it’s our final big milestone issue. How extreme will it be?

Also, there's a new Transformers forum! Started by some nice people on Twitter who were a bit sick of how aggressive some bigger boy boards could be. They're all very nice and I'll be popping in and out of Maccadams, so why not give it a look? 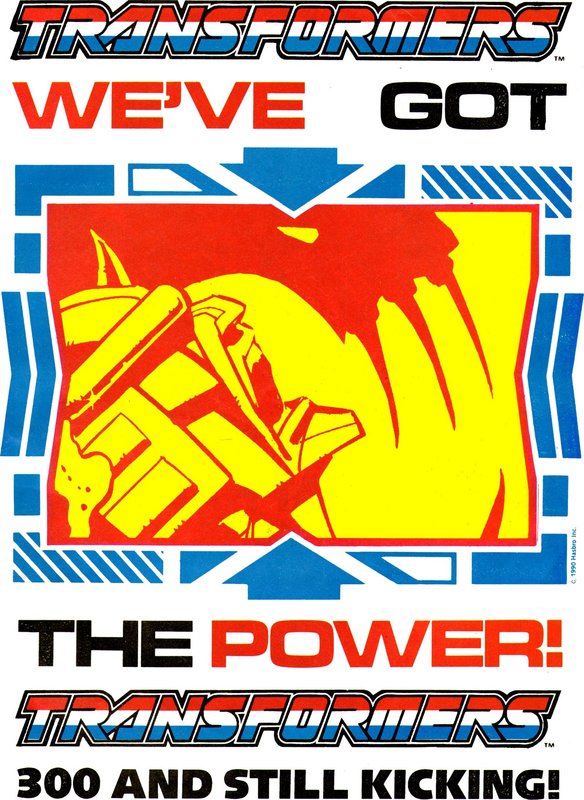 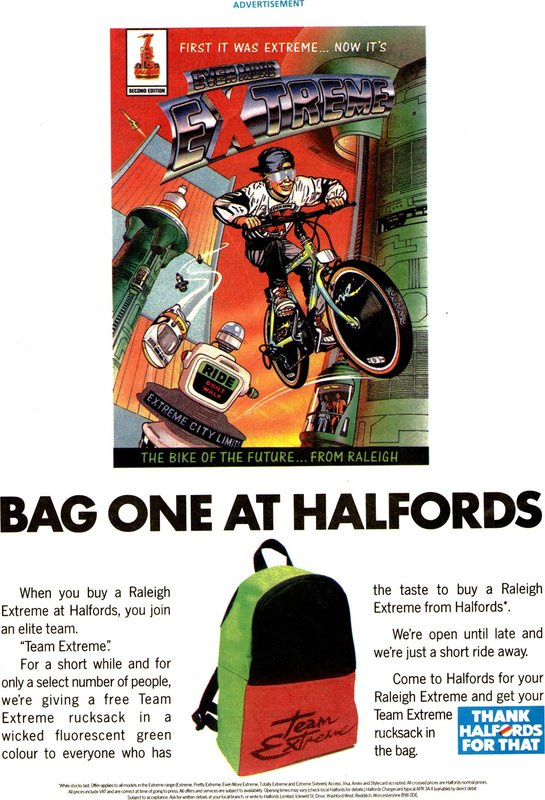