I'm as Serious as Cancer, When I Say That Rhythm is a Dancer. 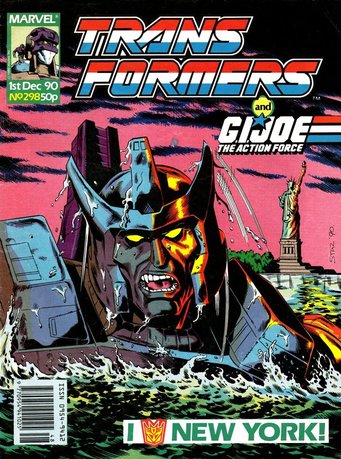 
Third person delusions of grandeur they call it. Me, I call it a few diodes short of a circuit board—ooop!


We’ve a gorgeous Staz cover this week, of Galvatron looming large out of the Hudson River bay with the Statue of Liberty behind him. Though this does make you realise what a shame it is that the UK stories have pissed about with a couple of rather ineffectual Galvatron appearances, imagine how much more impact this would have if it was the first appearance of the character in the almost two years since Time Wars.

Before we go to 2009 though, we briefly stop off in 2008 with the reprint. Which is notable for the NEXT box declaring next week to be “ORIGINS OF THE TRANSFORMERS(2)”. Amusingly, despite being the origin of the origin, the comic is now positioning it as the second take after the more recent presentation of the American version.

Our cover strip, despite the familiar to British readers idea of a future setting, does something with Transformers that no version of the franchise had touched upon up till this point, the dark alternate timeline. This is surprising perhaps as it’s such a stock SF plot, but remarkably even though the G.I. Joe cartoon did a Mirror Universe story, the robots in disguise never went near the idea (even though at this point the future present in the reprint may or may not be an alternate timeline it wasn’t intended as such at the time). 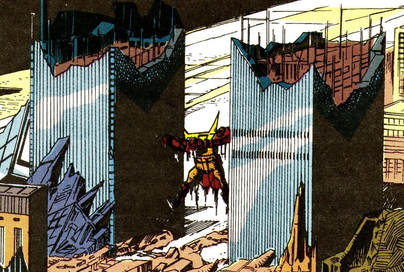 If anything, the idea a good chunk of the World Trade Centre would still be standing after such a disaster is the opposite of prophetic.
Which means the story can open with some stark and memorable imagery in a “possible future” of 2009 as Galvatron rises up out of the river and walks into a double page spread of the ruins of New York. It’s fair to say the Jose Delbo, on his last story, goes out on a high, with the wreckage and gutted heart of the city being an amazingly striking image. Especially with Rodimus Prime strung up between the remaining stubs of the Twin Towers, which of course cannot fail to have extra, uneasy, connotations when read now.

Indeed, rather infamously there was once an Ebay seller who tried to shift the American version of this issue for a ridiculous amount of money based on the idea Furman predicted 9/11, along with some very elaborate conspiracy theories. Though if Furman were a prophet, it was more All Hail Megatron he was foreseeing as the desolation of the city is one of several ideas from this story that series would try and explore in 12 times the length.

As we cut to a close up of Galvatron, we see Delbo does a great mad vacant eyed bastard. Indeed, possibly more out of his tree than Furman intended as the character will be a lot more wry and in control in future issues. But here he’s raving about how great he is, much to the confusion of the Pretender monsters, who are his honour guard for this tour of his masterpiece. 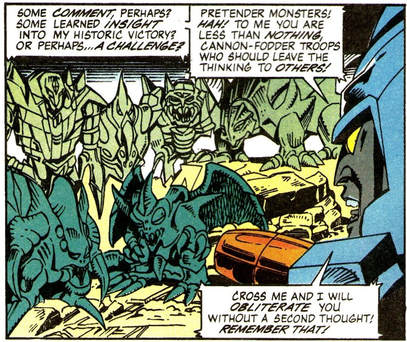 Buy the new toys kids! They are less than nothing.
Ah yes, the Pretender Monsters. A sign of how promotion of toys based on new characters will be handled from now on: They meekly hang around with the guy Furman likes, don’t get to show off their combining gimmick and are called crap by Galvatron. Still, the tension is nicely built up as Wildfly is heard making a joke about their leader’s sanity that results in the threat of death and the promise from Icepick that if his colleague threatens their life like that again, he’ll be the one to kill him.

Galvatron has come to New York on the pretext that there is still some Autobot resistance in the city, but the issue ends with him just using it as an excuse to roam the streets shouting and punching buildings.

This is a rather unnerving opening that successfully conveys all the bleak yet camp feeling of the best dark timeline stories and has some lovely Delbo work on it.

Naturally, with the return of the comic’s strongest villain, the image on Transformation is given over to a Pretender Monster. I’m not even sure which one. The main text also ends on another odd drink reference, “Make mine a Ratbat Ribena”, I can only assume the new editor has their feet well under the desk by now and this will be their thing.

The sidebar shows us the slightly arbitrary distinction between “Graphic Novels” and “Trade Paperbacks”, as under the former it promotes Death’s Head: The Body in Question and The Chronicles of Genghis Grimtoad, whilst the latter includes The Sleeze Brothers and Night Raven.

A full advert for the Spider-Man and Super-Heroes annuals does make you realise that, one mention in the letters page aside, there has been no promotion for this year’s Transformers Annual at all.

Dreadwind, in his penultimate page, suffers the ultimate indignity of a letter addressed to Blaster from Andrew Dornan of Stubbington (where the Stubbies come from?) saying how rubbish Dreadwind is. No wonder he doesn’t seem to care.

G.I. Joe: The Action Force begins a new adventure with Divided We Fall from issue 73 of their own comic, kicking off a Cobra Civil War arc that will not be finished before the backup is dropped. Here that is limited to some delightful smugness from Serpentor at Fred’s expense over the Strato Viper having captured the black box last week. Meanwhile Hawk is basically told to sort his shit out by an admiral by going to take the box back from Cobra Island. Amusingly all the Joes are amazed at how fast the Strato Viper was, even though they know Cobra is into robots and genetic experiments and stuff.

Combat Colin survives being shot thanks to his bullet-proof t-shirt, and copes with Megabrain’s attempt to destroy his mind thanks to it already having been scrambled by reading too many daft comics. Clearly the ultimate defence against anything. He then beats down with a massive Marvel speech bubble, which the villain tears up before chucking Colin in the Combat Shed (pedantic point: The last few weeks they’ve been battling in a supermarket car-park, not Colin’s garden), at which point Colin uses Professor Madprof’s time machine from issue 281 to send them both tumbling into history! Throw in a gag from Combat Kate about how she and the Giggly Sisters have been forced out of the strip this week and you have the series at its surreal best. 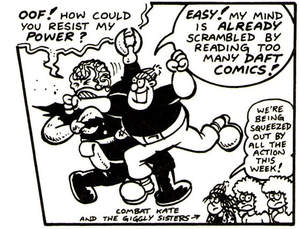 Keep reading daft comics (and daft comics blogs) folks.
I also asked Lew Stringer if he remembered why this story returned to black and white, and though he couldn’t recall, he did say that, because of the system used, the colours were done in-house at Marvel rather than by him, so the choice would have been down to them. It might have been that he handed in the work too late for them to add the colours, or it was for some other cost cutting reason. He’s a marvellous fellow Lew, you should all follow him on Twitter.


Next week... well, the NEXT box promises “THE HUMAN FACTOR”, but that’s still a month off and instead with find out why Rodimus Prime is hanging about. 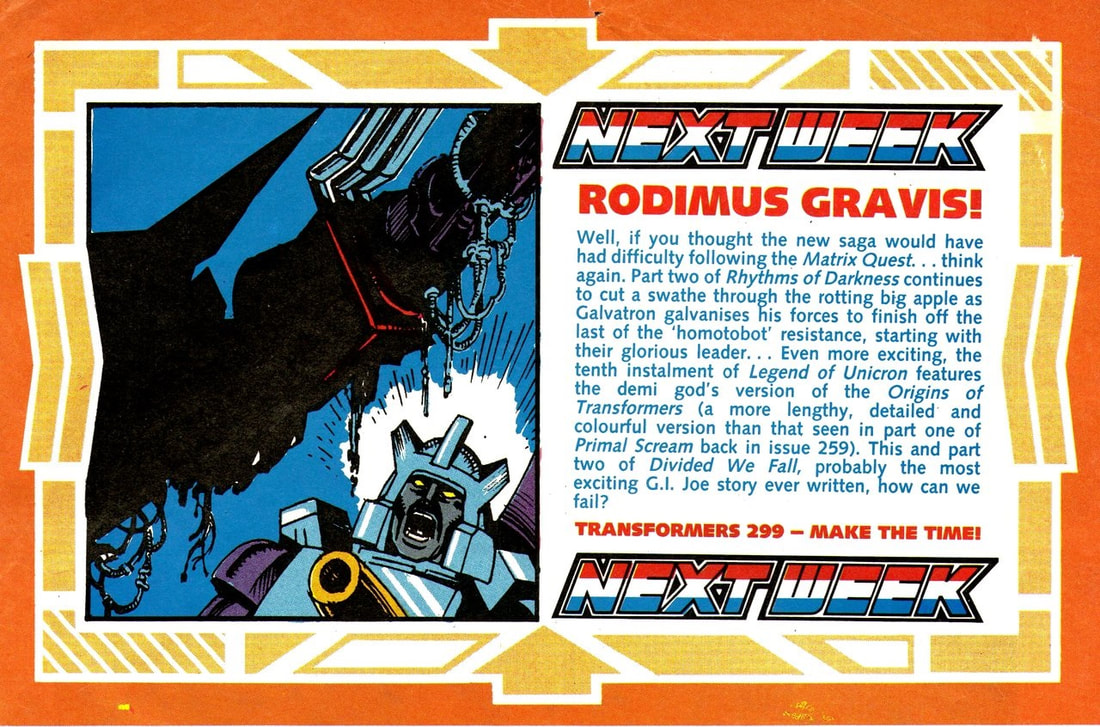