Shot Through the Heart and You're to Blame. 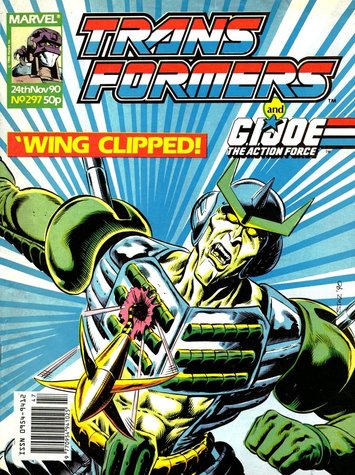 
So here we are, eight months and many interruptions later and in only the second issue to be released on my birthday we finally reach the end of Matrix Quest. Though the UK team haven’t kept the branding consistent, that’s the longest run from start to finish of any story in the series. For an adventure that’s been all over the place in terms of quality, the finale really needs to be something special to carry the weight of all that.

And against all the odds, or at least against how All Fall Down started, it actually manages it pretty well. Mainly thanks to Nightbeat, who remains the best character of this era as we open on him cheerfully ordering Siren and Hosehead to open the Ark bay doors and turn the gravity off whilst he goes “Fishing”, before even finding the time to crack the little joke I opened with as he targets Thunderwing with the Autobot’s harpoon.

Which means, again, that Staz’ cover of Thunderwing being shot through the heart by a harpoon is rather a spoiler. It also rather feels like this should be Longtooth’s moment. However, if we allow for the fact Furman is liberally using chunks of Dinobot Hunt! over the arc, this does improve on that in one important way in that the Autobots captured at the end of the Sludge issue never got to be anything other than hostages pumped for information. Nightbeat on the other hand gets a smart and fully satisfying pay-off to his mistreatment. 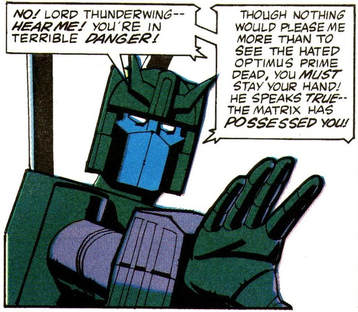 This will end well.
It is also of course hugely indebted to Alien. Making Nightbeat Sigourney Weaver in implausibly tiny pants and acting as a nice piece of symmetry to the previous instalments homage to the sequel.

Technically everything between this and Thunderwing getting blown out into space is mad vamping to meet the page count. However, it gives us a lovely moment for Spinister as he pleads with Thunderwing that, as much as he’d love to see Optimus Prime killed, the Matrix beast really is possessing him and it can only be for his own good to resist it. For all his mumbling and discontent, Spinister is loyal to the end.

Which is where the beast makes its mistake as it just zaps the helicopter. Which horrifies Thunderwing long enough for his personality to become dominant and for his normal luck to be restored and for Optimus to start winning again. Which is where the setup for what will be his final moment in this body continues as he can’t bring himself to kill Thunderwing and doesn’t know what to do otherwise. Luckily this is where Nightbeat acts (complete with “Time I wasn’t here” Furmanism, which was in Dinobot Hunt! as well, under almost identical circumstances), harpooning Thunderwing, and deactivating the locking clamps holding the shuttle in place as the gravity goes off and the bay depressurises as the doors open.

Get away from her you... wait, wrong film.
Why do the Autobots keep the Ark pressurised and with an atmosphere when they don’t need either? Seems a lot of effort to go to. Unless it's for the Nebulons, though that wouldn't explain why the Ark was built with the capability.

Anyway, he’s also set the self destruct, meaning out in the void we see the shuttle explode, but the drifting white outline of Thuderwing fall clear. Perhaps the Transformers have forgotten they can survive in space as it will turn out no one went to check.

After the other Decepticons decide they’ve had enough and surrender (which is a better fate for Spinister and Needlenose than the UK gave them. Unless this is set before that. Or after), this leaves Prime left to pick up the pieces and wonder if all this has been worth it. Which is a similar state to that which the reader would be in, though eventually he comes to the conclusion that Autobot values will prevail. 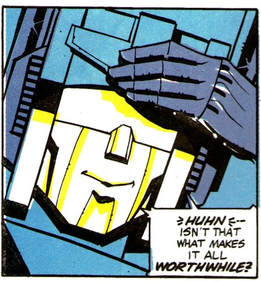 True dat.
That was rather a fun wrap up, again with stunning Geoff Senior art. But as a whole Matrix Quest can only be considered a moderate success, starting and ending strongly but with too much meandering in the middle. If it had simply skipped parts two and three it would be a much better arc and we’d have missed very little except the new toy advertising the anthology epic is especially well geared to doing. And tellingly, this is the last time new character toys (as opposed to new toys of old characters) will be given any special focus. Starting from next week, the new will be reserved for minor background roles, maybe getting a good death out of it if they’re lucky.

Transformation is as glad as the rest of us to have reached the end of the Quest, and seems to end with what feels like another forgotten advert reference with “Make mine a Predaking Pernod”. Meanwhile, the sidebar gives us the winners of the not-really 3-D video competition from issue 289, and starts what will be a rather meet build up to issue 300 by being mildly surprised we are still here. 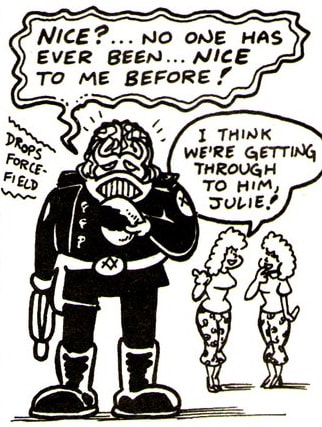 I feel strange empathy here.
The reprint hits the moment Death’s Head really becomes the lead character as he enters Unicron’s mind, which seems a rather quaint waste of time considering how the character has failed to take off in the two years since.

Combat Colin sees the attack on Megabrain fail, but the Giggly Sisters come very close to talking him round just by being nice to him. Which has never happened to him before. Sadly Steve comes with his big gun, ruining the moment and creating a moment of pathos as he tells Colin guns are the only way he knows.

Whilst his bum rests in an ice bucket.

Colin decides weapons only lead to war and challenges Megabrain to fisticuffs... to which Megabrain laughs at before firing his own mighty weapon.

Blimey, this really has been quite a serious story, hasn’t it?

Dreadwind is really on his last legs this week, if Euan Peters is still the editor he may well be writing his resignation letter through it. However, things start off on a serious note as Mrs J Dodd writes in to warn readers that her son had taken part in the Stock Exchange and, having sent off his toys, never got the promised ones in return. Therefore she encourages everyone to make sure they send their swaps by registered post to avoid their mistake, an idea which Dreadwind fully supports. 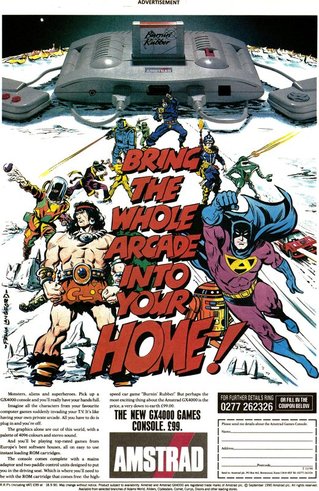 Another success for Alan Sugar.
The next letter on the other hand is from Master Mouth, now living in Chingford and being extremely gleeful over the thought of eating HiQ, before asking why Dreadwind is still on the letters page. The response to which is to suggest that the writer is just a podgy human.

The Decepticon is then bored by the threat of Freelance Peacekeeper Agents and more Mecannibals from P. Thornton of Southport, but does like the idea of reprinting stories from before issue 50. He’s less keen on bringing back Matt and the Cat.

The page then concludes on two letters about Action Masters. The first from Richard Turnstall of Audenshaw saying how awful the idea is. The second from C. Joannou of Norbury saying how great the idea is. We’ll have to wait and see which history will judge right, but Dreadwind is completely apathetic.

Speaking of apathy, the current G.I. Joe: The Action Force story ends with the Strato Viper getting away with the black box (though there is some attempted hand waving about it having anti-tamper safety features) and everyone standing around looking sheepish as their failure.

Next week, we head into a dark dimension as the story that will carry us over and through issue 300 begins. 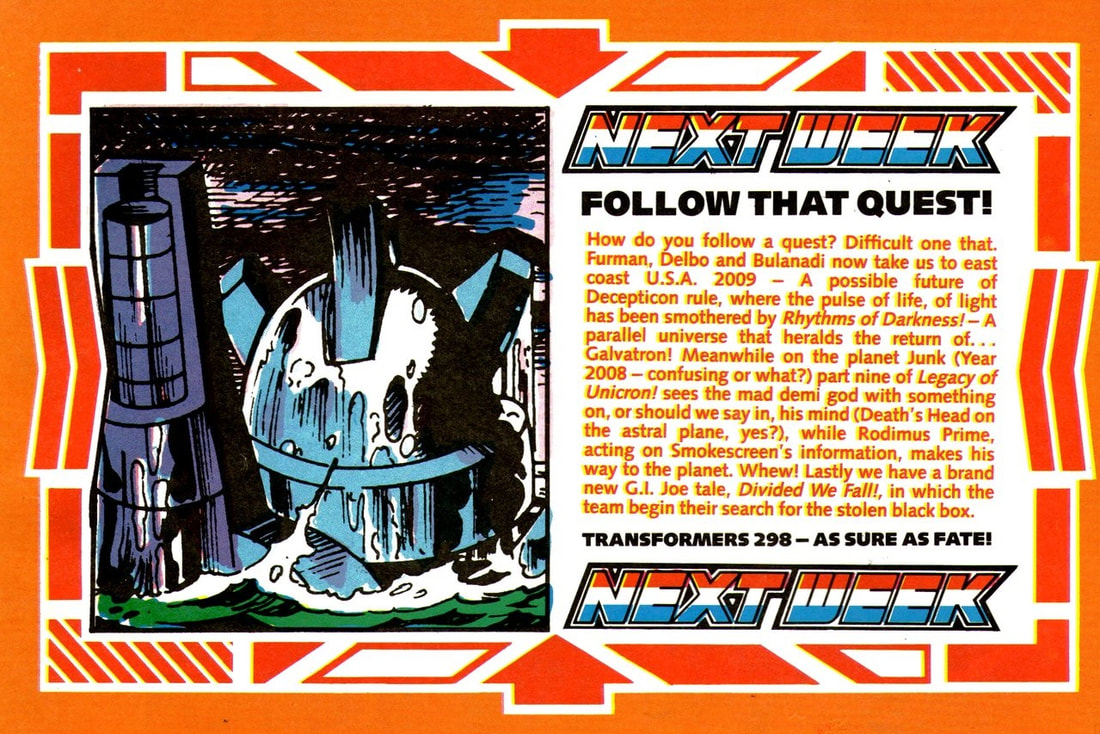