I am the Egg Man, They are the Egg Men, I am the Walrus. 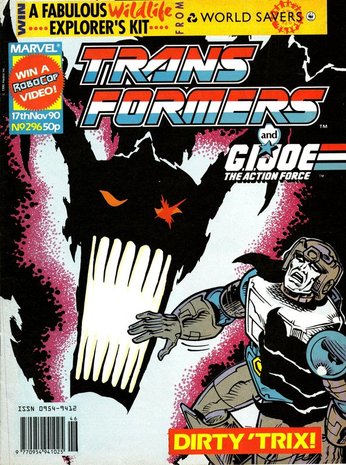 
After last week’s Unstoppable Jaundice Man, for issue 296 Steven Baskerville plays it safe with the cover and gives us a recognisable Transformer in jeopardy, with Kup under attack from the Matrix spawn. This might make readers of the current comics worry, but he’s perfectly safe by dint of not appearing in the actual story.

For the reprint, we of course get that beautiful Inferno/Smokescreen scene that is one of the best things Furman ever wrote and hit me as hard emotionally that first time I read it in 1990 as it has every time since.

The lead strip is basically one big action scene interspersed by two interludes. The first, opening, pause in the action sees Nightbeat pop his head out of the Autobot shuttle. It seems he and his partners woke up on the Decepticon ship and, realising what was going on and seeing their captors head over to Grimlock’s shuttle, stowed away in the hope of causing mischief. It’s a simple moment of exposition that should be clunky as Nightbeat is telling Siren and Hosehead things they already know for no reason. However, the joy he takes in working things out and glee at going to find “the spanner” to throw into the works keeps it more lively than it would otherwise be.

No one fists like Blurr.
The other interlude is even simpler, showing Starscream leaving the Decepticon’s New Jersey base whilst being watched by our old friend, the Mysterious Purple Transformer Who Talks Logically. We don’t see his eye this time, which leaves it a mere 98% obvious who it is. They’re not sure what Starscream is up to, but the Seeker could be what he needs for his fiendish plot. Or possibly to clean the seaweed off that’s amassed on him from all that squatting in the sea like an evil Daniel Craig.

The action scene is where the meat of the issue is though, and it finally sees the story kick into gear as, freed of the drag factor of Thunderwing, the Matrix is able to put on a much more impressive show. It chucks Autobots (including Getaway, which will make his many fans very sad) about with gay abandon. Indeed, Chromedome gets thrown so hard an arm goes flying off. The character who gets the most material, against the odds, is Blurr. Talking super-fast he becomes enraged at Chromedome being hurled at him and delivers a rapid-fire series of blows to the beast.

Blurr—Blurr!—punches the evil essence of God in the gut repeatedly.

It doesn’t work as he gets punched back harder, but it’s not a bad thing to have on his CV. 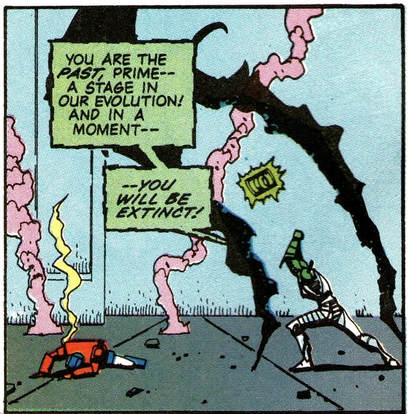 Is Prime on the edge of extinction?
During all this Thunderwing and the Matrix keep switching personas, from “I” to “We” and so on. Here letterer Jim Massara gets the rare chance to show off as he highlights the difference, with Yomtov making the Matrix speak green. This gives Optimus, who has decided this can’t go on, his “in” as he tries to persuade Thunderwing he’s possessed. The Matrix responds by zapping him and moving in for the kill. Is this the end of our hero?

The success of this part is largely down to Geoff Senior, but Furman still throws a nice couple of moments in that elevate it above the first half even beyond the art. Hopefully this will continue into the conclusion.

Transformation rather cheekily admits that running one story about the Transformers preparing for Unicron’s coming alongside one showing him in direct conflict with them is a little confusing. It also has the winners of the competition from issue 287, giving a reason to remind us of the reason for World Animal Day.

This leads neatly into the first of this issue’s two competitions, Natwest World Savers (set up between WWF and... well Natwest) are offering you the chance to win a wildlife explorers kit including a camera. The quality of the prize might explain the difficulty of the questions, including “How many species of fish can be found around Britain?” I’m buggered if I know.

Dreadwind is made to feel as if leaving is more a good thing than a bad as Anon from Gwent sends an incredibly long threat about crushing “Hi-Crash” if the letter isn’t published by Monday. The full question he wants answered being “What is your favourite colour?” 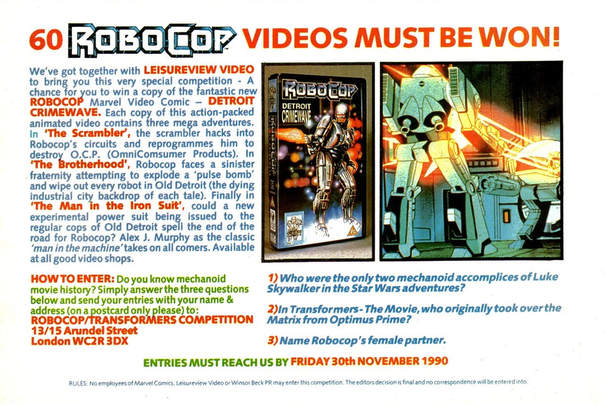 A PG Robocop is just wrong.
He also gets a lengthy letter from Terror-Tip, a Decepticon in the custody of Travers Wood Wolfe of Baltimore (of Co. Cork, not America), who has endured a series of disasters since being sent to Earth by Megatron and now has to do the human’s homework for the organism called a “Teacher”. Oddly Dreadwind refuses to help destroy the teacher person, claiming he absolutely refuses to kill a hume. Must be softening in his old age. Compared to that, a letter from Peter Hodgson of Scunthorpe listing all the Action Masters (and partners) and a poem about Galvatron where, for some reason he doesn’t directly name Galvatron, from David Givatron (!) of Bicester seem normal.

A full page ad for the Star: Trek: The Next Generation title (“A comic...but not as we know it”) gives me an excuse to mention I was wrong to say reprinting DC material must have been a unique thing for Marvel UK to do, as Tim Roll-Pickering pointed out it was actually fairly common, especially on licensed properties where the strip would be owned by the licensee (in this case Paramount) rather than the publisher.

Action Force sees the Strato Viper steal a black box from the space shuttle and plant explosives before exiting the pit... and running straight into Flint and Lady Jaye making out. Which is the most fun moment the backup has given us in months. Especially entertaining is how easily he beats them off (though not in the way Flint was planning to be beaten off) and flees in a Joe vehicle.

Combat Colin escapes from Megabrain thanks to a variation on a joke we’ve seen before (where I think Colin was the victim). The Intimidator Bomb surrounds Megabrain with insults—"Is that uniform velvet? So 1973!”—that distract him enough for the bobble hat wonder to flee. Thanks to a convenient rubbish skip, he finds Semi-Automatic Steve, the Giggly Sisters and Combat Kate. Which is followed by another variation on a previous gag as Macho-Man returns to take Megabrain on, only to do as well as he did against the steamroller robot. This time’s he’s zapped into biscuit crumbs, and so may not be back again. We then get a surprisingly solid cliff-hanger of Kate going in guns blazing.

The issue’s final competition is for the Robocop Marvel Video Comic: Detroit Crimewave. Which is a fancy way of describing three episodes of the Robocop cartoon that was a complete failure with kids because what kids liked about Robocop was the tits, swearing and violence. On the surface the questions seem easier than for the wildlife quiz, even including a Transformers one in its general robots theme (who originally took the Matrix from Prime in the film?), but the final one about naming Robocop’s female partner may be a bit tricky to folk that don’t know the film backwards.

Next week, tits, swearing and violence as the Matrix Quest ends. 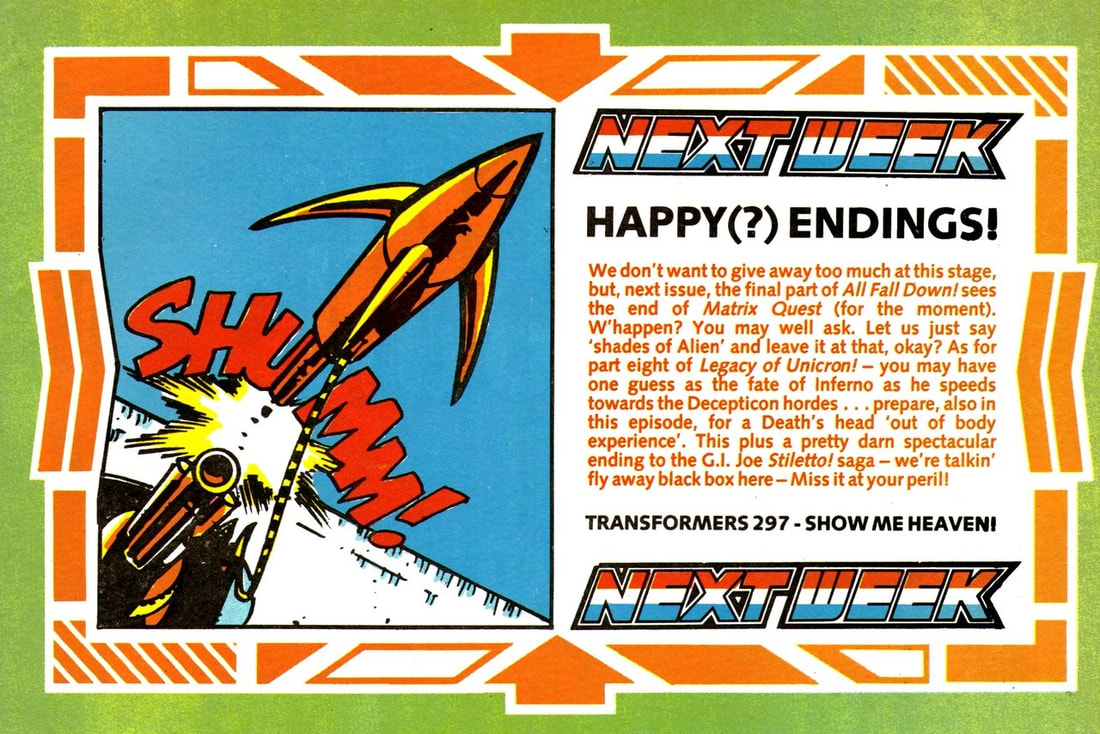