I Wanna Scream and Shout and Let it Out. 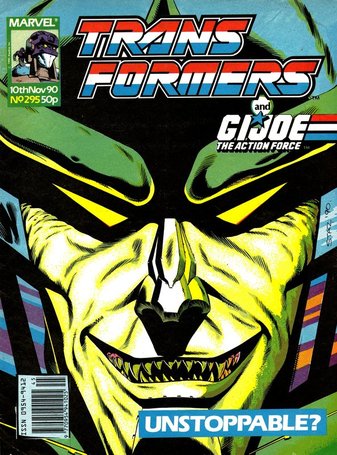 
No one touches the Matrix Master!


On the plus side, Staz doesn’t really give us a spoiler on the cover this week, though as a tight close up of Thunderwing’s face it probably didn’t grab the attention of many floating buyers who didn’t know who he was. Except possibly an unfortunate jaundice victim. Which makes it perhaps surprising this cover would be reused for one of the final “No relation to the contents" specials.

Inside, Legacy shows how well it holds up when broken down when one of the original cliffhangers, of Death’s Head being pleased to have made a start on his resistance of Unicron, actually seems slightly weaker than some of the faux ones we’ve had so far.

The lead strip is very much a study of two characters, one of which works and one of which is now descending into extreme silliness. Unsurprisingly to those who have been following this blog carefully for the last few weeks, the silly is very much Thunderwing. 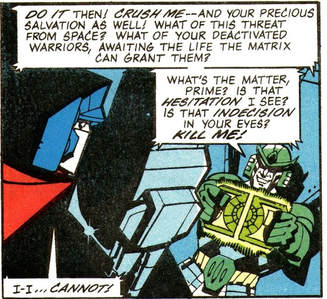 I'm pretty sure the Matrix is indestructible.
That’s Thunderwing, who, still with the essence of Primus flowing through him, is taken by surprise as Optimus Prime punches him in the robot kidneys and laughs at him for thinking the Matrix would protect him from someone who knows it so much better. Even when he starts winning again for the reason we’ll discuss in a second, his own troops watching from the shuttle still think he’s a dangerous loon. Which might not be far off as, despite getting back to gloating he’s taken down again by a shot from Highbrow of all characters.

Which gives us our cliffhanger of the Matrix deciding that, like Graham Chapman, it’s had enough of this silliness and just takes Thunderwing over entirely. Which is a pretty sick burn.

His sparing partner gets much better material though. Prime is initially quite cocky about beating Thunderwing, until it comes time to deliver a killing blow and the Decepticon smugly points out this could ruin any chance to stop Unicron/revive the deactivated Autobots. The momentary hesitation this causes is the set up for a pay-off we’ll get in what is effectively the series finale, but more importantly, when he’s again on the back-foot Prime fights smart and tricks Thunderwing into gloating about how he defeated Grimlock and company to give time for reinforcements (like super-Highbrow) to arrive. And Thunderwing’s smug (there’s that word again) description of how Prime’s “Brave” troops valiantly got so far before collapsing from the high gravity is the one good bit of material he has this issue. 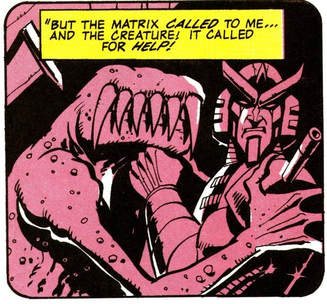 Guest staring Jimmy Hill.
Plotwise, this isn’t great, but once again Geoff Senior holds it all together with some amazing dynamic art. It has to be said, if this was drawn by Delbo I don’t think it would be so well regarded.

As well as promoting next week’s competition, Transformation is mainly concerned with announcing the new letters page host, Blaster (who, it helpfully reminds us, died in issue 209). He won’t be taking over till issue 300, which makes this lengthy transition period seem odd, as if someone has decided to treat it like Doctor Who (all we need is for Dreadwind to depart with a multi-hosts story). Presumably the intent is to try and avoid Blaster having to answer weeks of letters to his predecessor—as has happened the previous two times—when the book has no guarantee of lasting for weeks.

Combat Colin remains surprisingly serious (and in black and white), but has more gags this week, especially a great one of Colin noticing the inhabitants of Wallytown seem brainwashed as he goes on Combat Patrol before declaring the really strange thing is the great big spaceship parked in the middle of the shopping precinct. Captured by the reincarnated Megabrain, is this the end of Colin? And where is Semi-Automatic Steve? 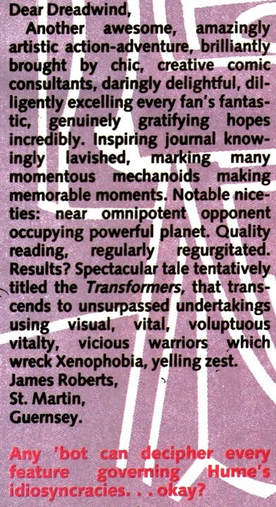 It's lucky James only reads the book version of this. I'll change what I've written to make it all nice for that. The perfect crime!
Ed Banger and the Fireworks Funsters are also back, this time to point out the dangers of standing too close to fireworks when you light them. Because Ed is a Mel Smith style punk (so 1990), the firework catches on his nose ring and pulls him to the moon. Frankly Blue Peter wheeling out that poor chap who was burnt in the Falklands every year was far more effective. Amusingly this is opposite Combat Colin, where one of the brainwashed Wallytowners is wearing a “Punk Lives” t-shirt.

Dreadwind is basically winding down at this point, mainly being cheesed off that Andrew Williams of Luton is still going on about the loss of the rest of Target: 2006. There is however the second letter from young Jimmy Roberts of Guernsey. According to the man himself this was inspired by a 2000AD letter and suggests he had a thesaurus for his birthday as it starts “Another awesome, amazingly artistic action-adventure brilliantly brought by chic, creative comic consultants...” and goes on in a similar vein through the alphabet at great length. Dreadwind attempts to reply in kind, but only gets as far as the letter I before giving up.

If his first letter was so James Roberts, this is SO James Roberts. I hope he at least got to complete his Protectobots with the free toy, it would be terrible if his Defensor was left without a leg to stand on.

G.I. Joe continues to introduce new toys, including Skidmark (who is OCD haha) and Wildcard (who breaks everything he touches haha), I hope you like both those gags as they’re repeated. A lot.

Luckily of course, I never run a joke into the ground and therefore join me next week for an amazingly awesome analysis of brilliant British chic comics. 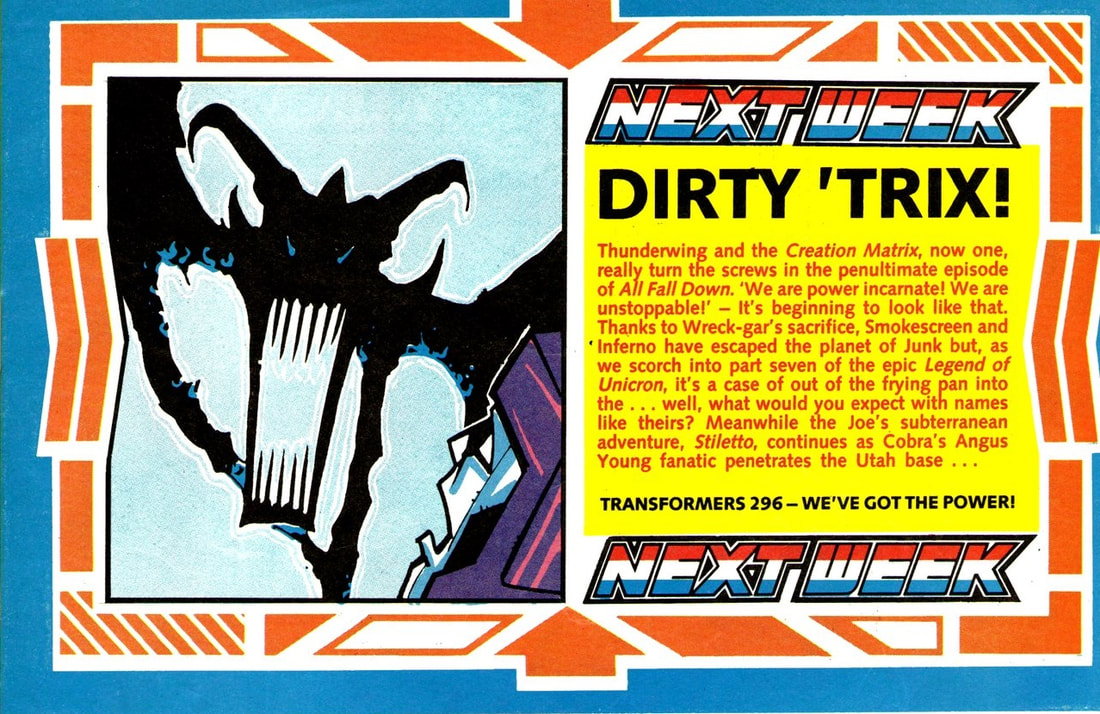