The Ghouls all Came From Their Humble Abodes, To Get a Jolt From My Electrodes. 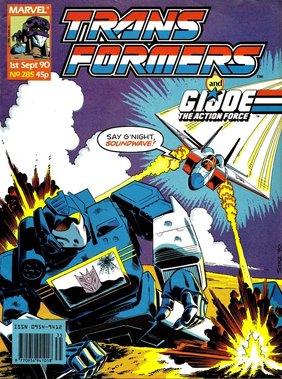 
Here’s one I prepared earlier!


First up, a bit of exciting real world news as all round loveliest Transformers convention TFNation has announced their 2018 dates, with the event running from 17th-19th August at the NEC Hilton once more. I’m sure there will be a lot of exciting things to discuss as they get announced over the next ten months.

Back in 1990, Dreadwind completes his move in to the cover box, though it will be rather a hollow victory for him as the Powermaster won’t remain hosting the letters page long enough for this to become a permanent fixture. 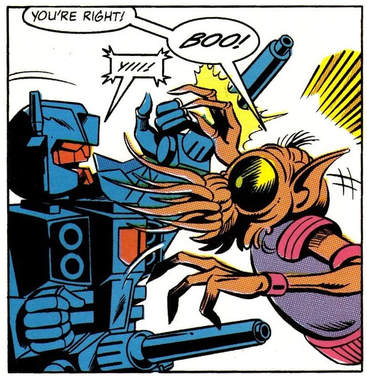 Give us a kiss.
Kings of the Wild Frontier rather whimpers to a conclusion this week. Thunderwing loses all interest in Dogfight once he realises his mind has been zapped and wanders off, presumably leaving the planet without thinking of trying to find the other Autobots. Which is a strange thing for someone we’re supposed to believe is becoming obsessed with the Matrix to do.

After a handy pep talk from the cowboys (who are the most robot friendly aliens we’ve yet met), Dogfight returns to the homestead and the aliens immediately give up all pretence despite still having two thirds of the team in their thrall. Though that does at least me we get an entertaining “BOO!” moment as the one turns into Dr. Zoidberg.

Luckily Override and Backstreet take almost no convincing to grab their conveniently close guns are start what is supposed to be a bitter fight to the death where they are forced to kill and confront their warlike nature.

This doesn’t work as we only see Dogfight’s kill, and for all he claims to have been given no choice in forcing the alien he’s fighting’s gun to explode, you don’t for a second think he couldn’t have decked the guy with one punch easily. Which makes the issue ending with the Throttlebots standing about looking sad feel completely unearned. Though as they’ll never appear again, I’d like to think they took up farming permanently.

Overall, this has been a very lukewarm resumption of the American series, despite still being a long way ahead of the previous 17 weeks. It very much feels as if both Furman and Delbo couldn’t quite connect with the material and neither is no their best form. 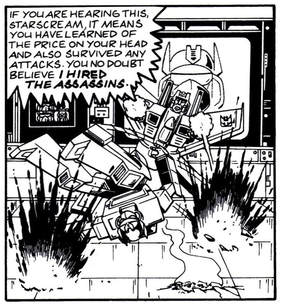 Get down Shep.
Like last week, British story External Force! Is a big action scene punctuated by moments of high comedy. Starting with Soundwave—having heard of the contract on Starscream—realising he’s been set-up and being genre savvy enough to realise he’s not going to have chance to explain and so pre-records a speech explaining his position to play as Starscream tries to kill him.

Which is rather wonderfully prefaced by the Blue Peter quote I opened with. This is how Soundwave is better than Wreck-Gar as his choice of childrens television doesn’t include Jimmy Saville.

What follows is the wonderful contrast of a pitched battle—with some fairly brutal punches and kicks—accompanied by a polite voice-over pointing out Soundwave would have just arranged an accident or gotten some decent killers in. Which convinces Starscream as he thinks the same way. It’s nice character work for the two of them, and the fact Starscream doesn’t follow through with a killing blow when he has an excellent excuse to do so and take full charge suggests a major change in their working relationship. 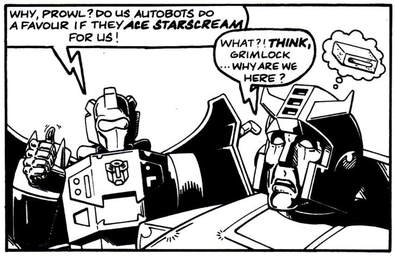 What a brick.
It’s lucky they’re now pals as this is the point the Mayhem Attack Squad barge in. Which gives us the single greatest moment of the Earthforce era as the watching Autobots outside observe this and Grimlock is really happy to let the Mayhems kill Starscream.

Cue Prowl’s Very Patient explanation of why they need Starscream alive and the marvellous sight of his thought bubble containing a brick. Quite, quite glorious.

Unusually for one of the shorter strips (and perhaps a sign that this storyline doesn’t have a huge amount of mileage to it) we then end on a full splash page of our mystery villains attacking... Megatron and Shockwave! *GASP*

With solid art by Peter Knifton this continues to be good fun, though again Transformation bigs it up to a scale it can’t quite meet.

Transformation not only bigs up next week’s conclusion to the “Incredible” Assassins trilogy, but attempts to generate interest over what it doesn’t know will be the final run of UK stories as a human goes “Where no man has gone before” in a story where there’s “More than meets the eye”. It also corrects an error from issue 277 where Michael Eve was credited as inks on the British story when the art was entirely Simon Coleby. 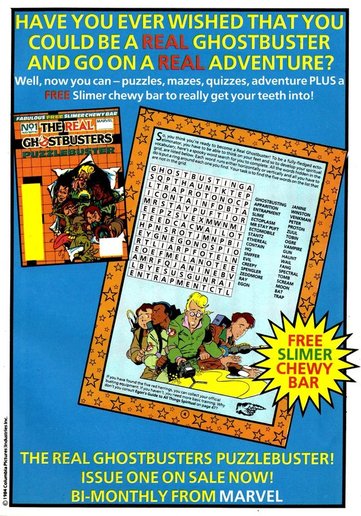 Plenty for you to chew over there.
AtoZ covers Trailbreaker and Trypticon, with me never realising before just how blue the former’s Marvel character model is. Meanwhile, Combat Colin attempts to replace the destroyed Combat Rocket by fitting thrusters to the Combat Shed. But because the walls aren’t nailed into the floor it blasts off without them, ending up on the Moon. Much to Colin’s sheepish denial when Headline Howard shows him the coverage in the Wednesday Wart.

Dreadwind clarifies to Colin Harvey of Moss Side that the missing issues of Target: 2006 are unlikely to ever be found, but they might still run the rest of the story after the current Collected Comics reprint of Space Pirates! has concluded. In reality, and as a sign of how things are slowly starting to fall apart, Space Pirates! won’t be finished by the series either.

Oddly we get our second letter in two weeks, this one from S. Frost of Bude, insisting the reason Nightbeat, Siren and Hosehead were the same size as Miss Fatale is because they are Micromasters. Which shows how well Hasbro’s advertising machine is dong at this point.

Into the Breach concludes without anyone making any insane racist, nationalistic or cunt like (the favourite new word of Doctor Who Magazine by the by) commentary. Which, even with a cliff-hanger of Wild Bill’s plane about to crash with the hostages and Dreadknoks aboard, means the final result is rather dull. On the plus side Destro, obviously inspired by Emirate Xaaron’s new look after he moved to America, has decided to paint his head gold.

There are also adverts for two interesting comics. The first is for the second chapter of Knights of Pendragon, Skin and Bone, showing that series to be one of the few non-licenced successes of the period.

The second is the Real Ghostbusters Puzzlebuster. Which, amazingly, was one of a series. Apparently filling in wordsearches will help you become a REAL Ghostbuster. As I’m terrible at wordsearches I’ll have to make do with being a fake one. Still, you get a Slimer Chewy Bar as well. Though if you didn’t eat it at the time, I wouldn’t recommend doing so now.

Next week, Grimlock makes a pal. 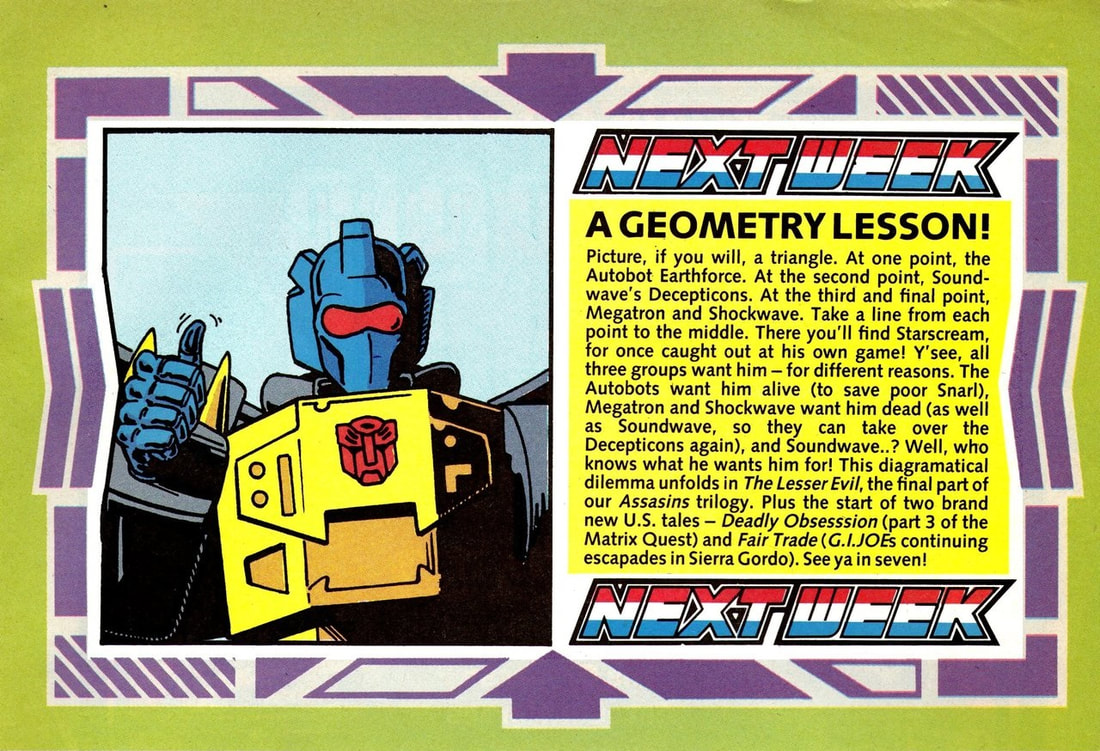