For I Must Face the Man Who Hates Me. 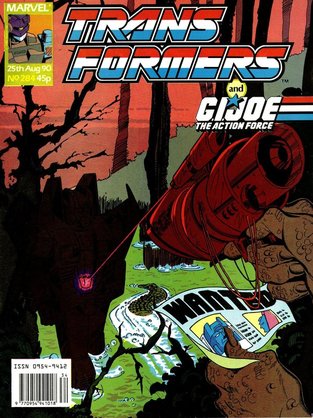 
I suggest you stand aside, we have business here that doesn’t involve lower lifeforms such as yourselves!


This week the cover features a celebrity cameo, as a Predator from the Predator movies—the second of which would be released a few months after this—is shown taking aim at Starscream.

This is just a throwaway gag rather than meaning the bloke from Bigfoot and the Hendersons shows up within and artist Kirk Etienne is very careful to make sure only the hands and not anything too copyright infringing are on display, but it’s a nice fun thing to spot and the likely unintentional Peter Cullen connection makes it that little bit sweeter.

Amidst this it’s easy to miss Dreadwind is almost in place in the corner box now. 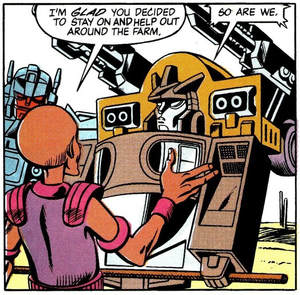 How will you farm when you can't bend your arms?
The third part of Kings of the Wild Frontier opens with an odd scene where, only a year after Bumblebee had barely heard of Primus, we see Optimus in the Ark’s chapel and praying in front of its massive gong. Which lets us have our one chance to see Delbo draw Unicron as he has a depressing vision of the future.

Back at the plot we sees the Triggerbots now fully domesticated and working the farm with no memory of what they came to the planet for. This is perhaps where Furman shows his influences extend beyond Westerns as the whole sequence feels like a combination of two Star Trek episodes. First the emotion reading shape-shifting Salt Vampire from The Man Trap and second the spores from This Side of Paradise that made the colonists placid and happy and with no drive in their lives.

But of course, if you were a Triggerbot you’d probably take working a hoe down on the farm over being a Triggerbot any day of the week.

Of course, the cliché in any sort of memory loss/mind control plot is the “I know you’re still in there, fight it!” sequence. Which Furman actually nicely subverts here by having it triggered by the villain rather than a friend of the hero as Dogfight decides to escort one of the farmers into town to do their shopping and runs right into Thunderwing and company. 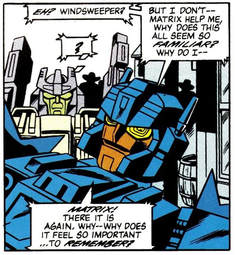 The eyes have it.
This entire sequence is rather fun as Thunderwing is incredibly polite to the locals whilst being utterly contemptuous at the same time, asking them to stand aside as he interviews Dogfight about the Matrix. Whilst using his bloody big gun as a Dictaphone. Getting into a fight with the ‘Cons and nearly being stomped by Windsweeper winds up confusing Dogfight enough as to make him start to remember things. Meaning we get a fun beat of the alien running off with a cheerful Furmanism (“Time I wasn’t here!”) as the issue ends with Dogfight beaten because his character model can’t bend the arms at the elbow, making him useless in a fight.

A bit of Transformers action makes this the most solid part of the story to date, with one of our last sights of a reasonably sane Thunderwing. Delbo finally gets to have some fun with Dogfight’s wide vacant hypnotised stare as well. 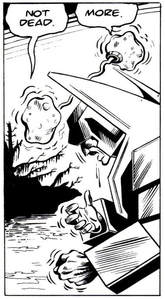 How I feel after a week at work.
The British story, Assassins, is a straightforward action scene of Starscream being chased about a Louisianan bayou by various... well, assassins. Which (along with the likely intentional callback of last week’s NEXT box using “Wanted: Dead” as its tag-line) makes me wonder if this was originally conceived as a means of bringing Death’s Head back into the comic. The chronology of his adventures is about to get increasingly contrived as he hops about through history in bitty guest star spots so it wouldn’t have been that much of a reach to have a one on one duel between him and Starscream here.

Either way, Jeff Anderson (on his last pencils, but I’ll talk about him more when we see his last inks in a few weeks) has huge fun creating a variety of wacky and weird aliens, including a knight riding a SPACE horse and conjoined giant floating amoeba. Starscream is also on fine form, reacting with wonderful incredulity at each bit of weirdness that faces him and actually getting to be a credible fighting threat for once as he takes each assassin down. 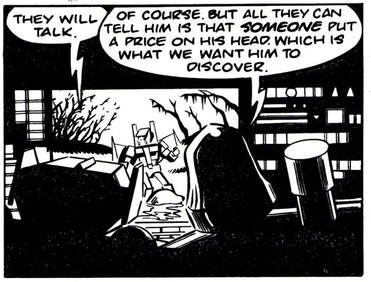 Could be anyone.
As he interrogates the amoeba we cut to what is our final British instance of An Attempt To Keep the Identities of Transformers With Distinctive Outlines A Mystery By Putting Them In Shadow as two Mysterious Someone’s are watching on CCTV and confidently predict Starscream will jump to the wrong conclusion when he finds out there’s a contract out on him. Which he does, cursing Soundwave’s name for trying to take solo-leadership of Decepticons. Which leads to our Mystery Strangers putting a call in to the Mayhem Attack Squad...

And also into a most unexpected callback to last year’s annual over at Earthforce as Snarl is formally diagnosed with Corrodia Gravis. Though rather than putting his mind in the body of an actual dinosaur, Wheeljack has a cure in mind, a “Systems Boost” from the only compatible Transformer: Starscream!

This is a fast read, even by the standards of the five page strips, but it’s huge fun and after a few weeks of very dark humour, it’s a nice change of pace to have a light and breezy Furman on display, coupled with an equally playful Jeff Anderson. It’s just a shame the Transformation page rather over-sells it by stating this starts the latest “Epic”.

"Please stop asking me things I can't be arsed to find out the answers to"
Speaking of which, the sidebar on the editorial is taken over by Dreadwind, begging for more “interesting” letters than ones asking about how old he is, how tall he is, who’s strongest and the rights and wrongs of the black and white strip.

So imagine being Justin Pierre of Bristol, who has a letter this week asking who is the most intelligent Dinobot (Swoop of course) and the fastest Aerialbot (Skydive). Or John Williamson of Castleford who asks how old Dreadwind is (and gets a Dreadwind Fails to Answer Questions Properly! refusal to answer). “Yay, my letter has been published in Transformers!... with a preface saying what terrible letters these are.” Presumably the letter from Grimlock (though confusingly signed “Optimus Prime”) mocking humans who write in pretending to be Transformers is more like the sort of thing the editorial team want.

AtoZ returns to colour with Topspin and Tracks, whilst Combat Colin deals with a boring Sunday Combat Patrol (even the visiting pan-dimensional aliens are only after a picnic rather than an invasion) by locking up Semi-Automatic Steve for breaking a shop window in frustration and then arresting himself as an accomplice.

In the third part of our G.I. Joe: The Action Force story we...

Hey, remember that contentious moment two weeks ago when Roadblock threatens to shoot an unarmed civilian in the head for daring to think of burning the US flag?

Well t turns out Roadblocks part in the mission is to BLOW UP THE ENTIRE BUILDING THE FLAG IS IN. And no, there’s no indication that they’ve taken the time to collect all the flags (and there would presumably be a fair few) in the embassy on this pressed for time mission. So when Roadblock detonates the building (with a fantastic KA-BLOOEY sound effect) he is himself setting fire to at least one and probably a good half dozen at minimum American flags.

"Because burning the US flag is a fucking awesome thing to do!"
And this was in the same issue as the head shot threat originally. So Larry Hama isn’t just a horrible bigot, he’s a hypocrite who assumes the readership is really thick and won’t notice this contradiction within a few pages. Which is backed up by Zarana taking a hostage at the airfield to try and get evacuated by Wild Bill and threatening to shot the unarmed civilian in the head. Because that’s what the baddies do.

Unless next week has Roadblock shoot himself in the head as penance for his flag desecration I’m upgrading my previous opinion of everyone involved in the creation of this story to Cock Juggling Thunder-Cunts.

The real question for next week is, will the Soundwave/Starscream fight to the death be interesting enough to safely distract me from anything Larry Hama does? 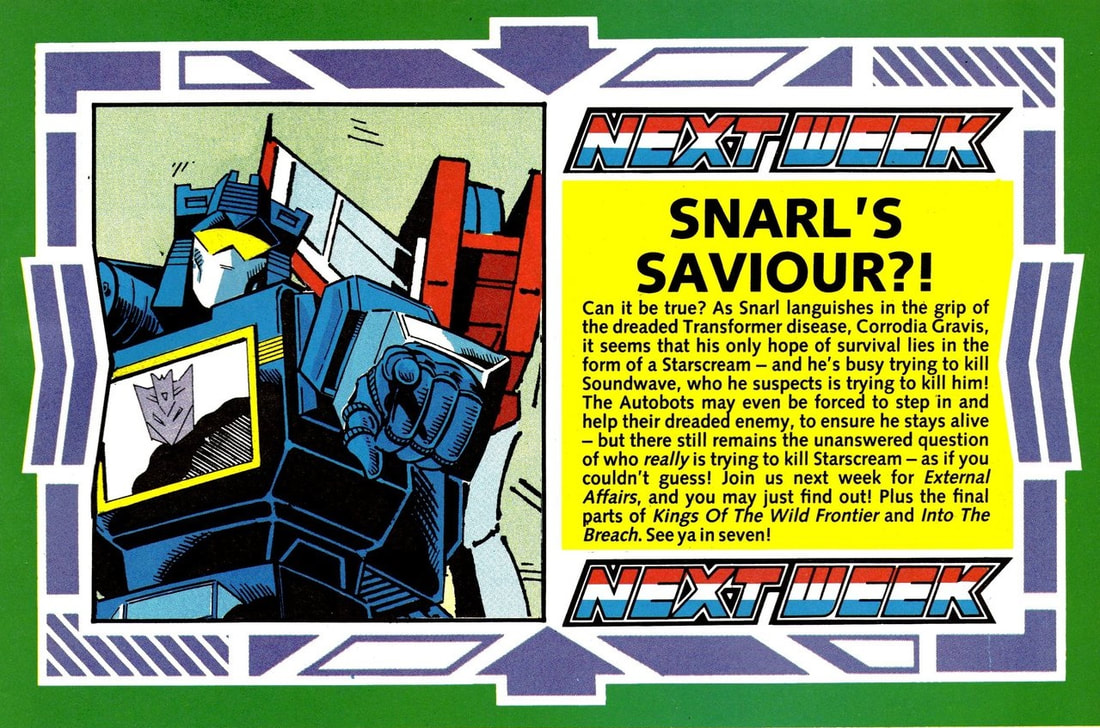