Mad Man Lost His Damn Mind in the West. 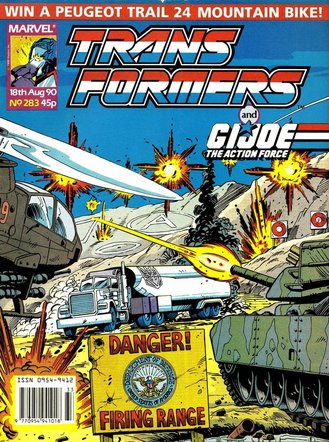 The comments on the last issue are therefore well worth a look, especially if you disagreed with me. And to be clear, all counter thoughts are more than welcome and I don’t mind people telling me when they think I’m a tit. I just wish I’d had more time to reply properly to people.

Will this week’s issue prove to be as dramatic? Well, let’s hope Hama doesn’t have Destro eating babies or some such… 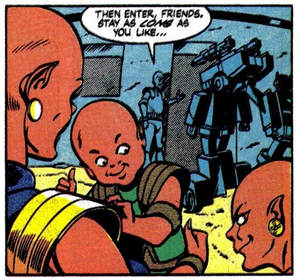 Nothing sinister here at all.
The second part of Kings of the Wild Frontier is fairly leisurely in its pace, being more about an attempt to set up a tense mood. The Autobots drive off the cowboys and are invited into the home of the family, with it being very clear from the off they have some sort of mental powers that are being used to persuade the Triggerbots to hang about. Particularly effective is the little thumbs up the toddler gives as Backstreet and company go into the homestead.

The rest of their side of the plot is basically a repetition of this, the Autobots have some nice wine and chat about the Matrix—coming to the assumption it’s not that important considering Matrix power flows through all of them anyway—before being “Persuaded” to stay for the night. There’s one attempt at a jump scare as Dogfight sees “Something” at the window, which provokes a comically cowardly reaction. Guess he's not that great a warrior after all. 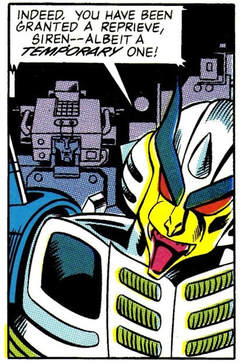 Nothing sinister here at all.
The interesting and far more unsettling stuff is actually in the Thunderwing subplot as we see what happened to Nightbeat and friends: They’re now strung up in mind probe hats and are being rather brutally tortured for information on the Matrix Quest. It’s an especially nice touch that Nightbeat knows better than to try and fight the thing (unlike poor old Hosehead) and gives up his information quickly. That’s very in keeping with his Chandler based character as Marlow wasn’t incredibly pragmatic when it came to interrogation as well.

We also get the set up for Thunderwing’s arc for the rest of this storyline as Ruckus assumes they’ve come to Cheyne (which is worth mentioning is a take on Shane, expect more of this as we go along) to destroy the Matrix. Which Thunderwing thinks shows a paucity of ambition and there is far more potential in possessing it…

I suspect this probably made more of an impact on American readers at the time as their book hadn’t really done anything like this up to this point. On its own terms it’s certainly amiable enough, but it hasn’t really kicked into gear yet. Which probably isn’t helped by oddly flat art from Delbo. Which is strange as horror and monsters are far more up his street than robots, perhaps he just doesn’t like westerns? One suspects this would be a whole lot more creepy if drawn by a Dan Reed. 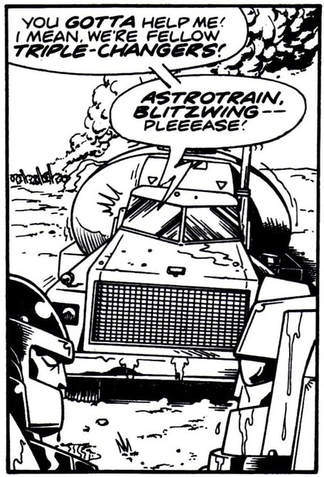 Feel the love.
The British story continues the trend of increasingly dark humour of the last few weeks as Manoeuvres gives some focus to the Decepticon triple changers (two of whom were re-released around this time, Blitzwing is just along for the ride).

As is so often the case with this era, Furman decides to base the story around a long ignored facet of an old character’s tec specs that have not received much love up till now. In this case, Octane’s job as a fuel thief and how this bores him and makes him act like a prick on the road. Pleasingly he also reuses the unreliable narrator aspect he created for the character that he had such fun with way back in Resurrection!

Which has led him into a US military training exercise using live ammunition.

Probably best not to think why the army would carry on the exercise once they spot a civilian vehicle in the combat zone, especially as they actively make the choice to engage Blitzwing and Astrotrain when they join the fray. Maybe that tanker looked like it was about to burn the US flag?

The fun here comes from Blitzwing and Astrotrain’s incredulity as Octane explains his situation and pleads for help. And though they are clearly annoyed with him and couch giving their assistance in terms of getting a work out, there’s also a real sense of camaraderie in there as well, Octane is a dick but he’s their dick. 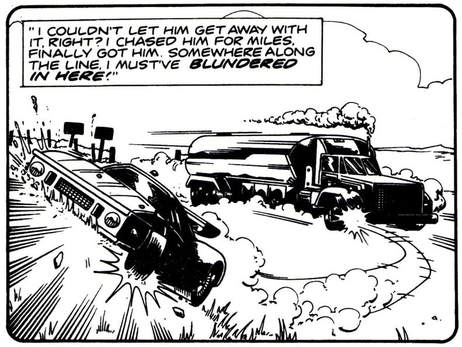 Who could that be?
Which leads to a fun battle scene where Astro and Blitzy are frustrated by the basic competence of the soldiers and become increasingly annoyed that Octane won’t pitch in. Which is where he drops his first metaphorical bombshell: He’s loaded with fuel and one hit will kaboom him (which presumably affects his ability to just fly away as well).

Then he drops his second bombshell: This is entirely down to him refusing to let go of a car that successfully avoided his attempts to “Play”, chasing it for miles until he wound up at the test sight. Which goes beyond the sort of hijinks his colleagues are prepared to put up with, resulting in them flying off and leaving Octane to his fate, as he screams for help.

With the final twist being that car he chases is watching from up on a nearby hill... and turns out to be Jazz, who cheerfully led Octane to his death as an object lesson.

If you allow for the fact that, despite Blitzwing being careful to say Octane might survive and learn a lesson, we never see Octane again this becomes a blackly brutal way to kill him off. And whilst not quite on the same level as the last few weeks this still has plenty of striking and memorable moments and some nice art of Peter Knifton. It’s interesting how much darker and death obsessed even the comedy stories are becoming as the British content starts to head towards the end. As if Furman knew the chop was approaching and is reflecting it in the content. 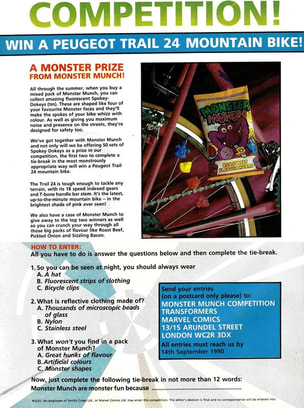 A page that could probably have been in black and white.
Transformation is hugely excited about the Monster Munch competition, and perhaps rather spoils the fun of the changing info box on the cover (This week: Someone punches Prime in the face) by pointing it out to readers.

The Monster Munch competition itself is one where there is no attempt to tie it into the comic, it’s just win a bike (not completely random as they were giving clackers... no, sorry, I mean Spokey-Dokeys (tm) away in packs at the time) by answering a few questions about road safety and how totally healthy Monster Munch are. Plus there’s a tie breaker “Monster Munch are monster fun because...” option.

We get one of the more infamous AtoZ’s this week as Thundercracker and Thrust are printed in black and white. This will not be a popular decision, resulting in it never being done again and a colour reprint further down the line. It doesn’t help that two characters who are basically identical to two other characters each (and not that different from each other) bar their colours are the ones to get this treatment.

Combat Colin has another one-off adventure, this time against the Amazing Dave, who is putting people to sleep with his dull card tricks so he can rob them. After taking out Semi-Automatic Steve with a boxing glove on a spring from his top hat (which leaves a lovely black eye) Dave is undone literally as he turns into Mountain Man before he realises this means all the doves up his sleeves will escape. 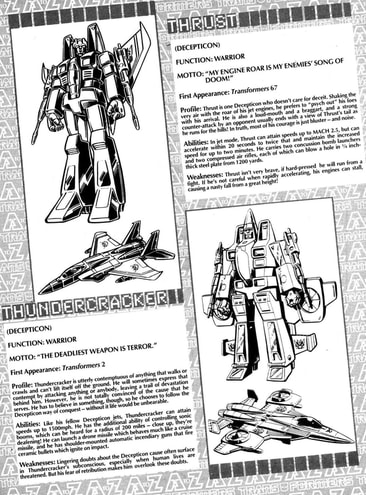 A page that should probably have been in colour...
There are a huge and entertaining number of Dreadwind Fails to Answer Questions Properly to chose from this week. I have two favourites though. The first being Adam Cheshire of Portsmouth confusing the Micromaster Battlefield Headquarters for a new Optimus Prime toy (presumably because a truck/trailer can only be Prime?), resulting in a meltdown from Dreadwind about no one telling him anything and a made up on the spot story about this new Prime being from a parallel Universe.

My other favourite is him not being able to tell C. Burfitt of Bournville where the rest of the Throttlebots are (they are dead), but that Goldbug (who was never actually a Throttlebot in the comic, he just hung round with them) is still around (he isn’t).

Amidst that it’s easy to miss the first mention of Action Masters in the response to the question about if its possible to still buy Shockwave. This will go well.

Perhaps mercifully there’s not a huge amount to say about G.I. Joe: The Action Force this week, being mainly given over to Destro providing a demonstration of his weapons to both the generic South American government and the North American Banana Monopoly by attacking a Terrordrome.

It does feel like there’s a scathing commentary on American interference in South American politics here, but it’s rather muted by it being an EVIL corporation rather than the actual US government and just helps to remind you that the flag burner last week was entirely justified in his loathing of America and a perfectly reasonable reaction to US interference in the area would be not so much to disrespect the flag as to burn the whole embassy to the ground and salt the earth.

The real excitement from the issue though comes from the advert for new white Smarties. Which I don’t think are still being made, so presumably they were even more like crack than the blue ones.

Next week, a Predator is on the prowl. 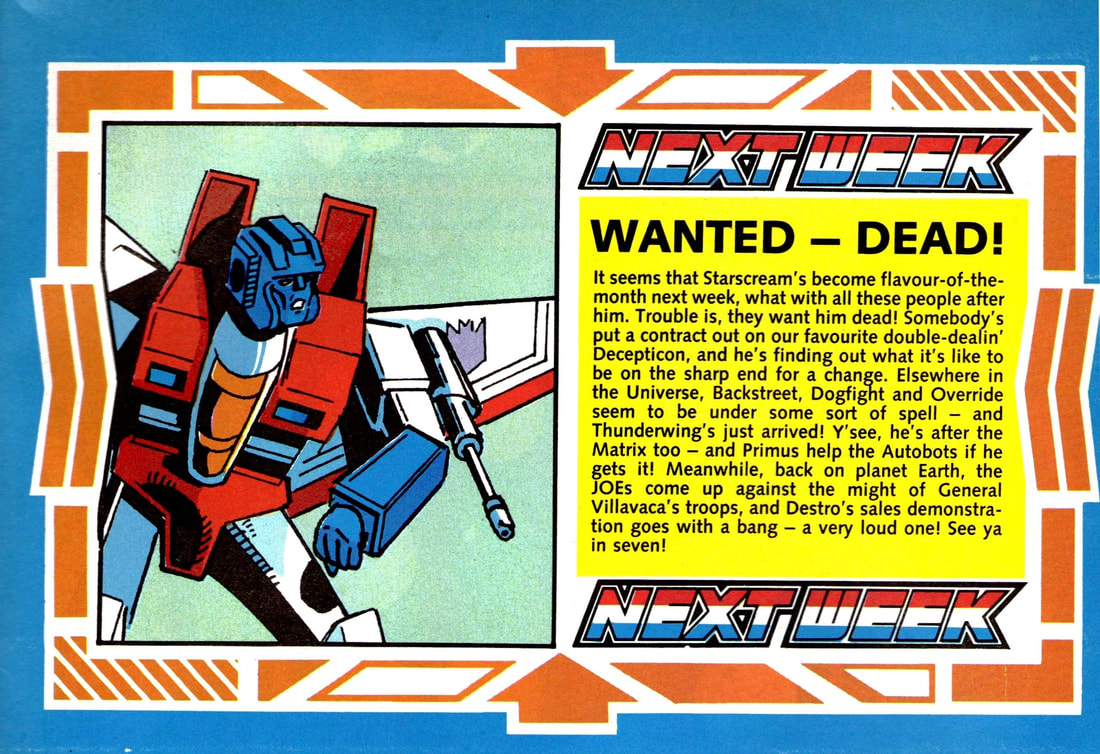