I’m on a Boat and It’s Going Fast and I’ve Got a Nautical Theme, Pashmina Afghan. 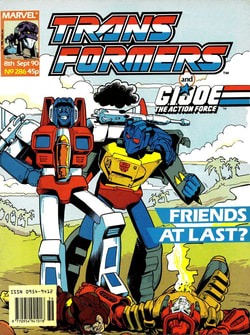 
*The original American printing had Matrix Quest branding, but this has been removed entirely this time. Probably because the US team got it wrong and called this Part 4...


The pursuit is almost over and vengeance is mine! You hear me, mine!


This is one of those issues I have an oddly strong memory of from the time. I was visiting my Grandmother in Stourbridge and was allowed to buy something from the local newsagent and was so excited to see this cover in the wild that I very nearly convinced her to buy it until I suddenly remembered we had a standing order at home and this would be an insane thing to do.

Andy Wildman, returning to a bit of UK work for the first time in a while, does produce a fun cover though, with Starscream’s cheery face as he hugs the grumpy Grimlock being especially lovely. 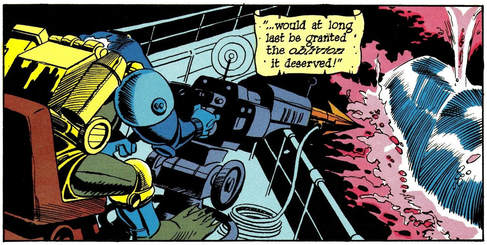 He wants Dick badly.
The third part of Matrix Quest gives us one of the more literate homages in the whole series as Furman takes on a big dick.

Moby Dick to be precise. Well, I say literate, but despite never having read the book, I would be willing to bet this is all surface level stuff (“Call me Longtooth!”) taken from cultural osmosis and the various film versions over the years rather than an in-depth knowledge of the prose. Certainly, from a 2017 perspective, if you’ve seen Star Trek: First Contact you’ve got the basics covered. The fact Longtooth’s boat is called the Ocra is a sign we’ll be quickly heading into more general sea movie spoofery before too long as well.

The surprise for me though, as someone who remembers this being rather poor, is how atmospheric this opening part is. We get a fantastic opening splash page of Longtooth with a peg-leg and massive harpoon on the deck of his boat, foaming at the mouth mad and giving a narration in old fashioned handwriting about his thirst to kill the sea monster that torments him. 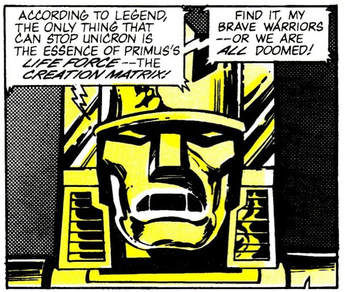 We're doomed, all doomed!
What sells these first three pages is, perhaps surprisingly, Jose Delbo’s art. Only last week he was feeling tired, but here we get something dark, dirty and gritty that doesn’t seem like the same artist. Maybe it’s our old friend Dan Reed on most of the inks that’s making the difference, maybe seeing what Geoff Senior can do has inspired him. Maybe, as he’s on his way out of the door here with only one more story to go, Delbo has just decided to cut lose and have fun. Regardless of the reason, Delbo makes a mad walrus man more gripping than it has any right to be.

It’s therefore a shame, and perhaps a sign of how the rest of this story will more live up (or down) to my recollections, we cut from Longtooth’s inner monologue to Pincher and Doubleheader flying in to try and stop him killing the beast and things become more conventional. Meaning the issue ends on an extended piece of exposition about how Xaaron warned them about Unicron (whom Longtooth doesn’t take remotely seriously) before sending them to planet Pequod (Ahab’s ship apparently) on their part of the quest.

Though it is a nice touch, after two stories where I’ve berated the Autobot search method, it’s acknowledged they wandered about for two weeks before stumbling across anything. Overall though, a much stronger opening than I was expecting. 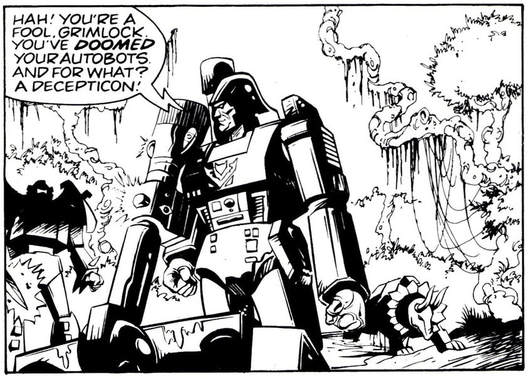 Everyone loves a film homage, right Ironhide?
The British story, The Lesser Evil!, on the other hand is rather less than I was expecting, feeling very much like a rushed conclusion. Things do start promisingly though, with maximum drama being milked from Grimlock having to send the Dinobots to rescue Starscream very reluctantly.

The fight outside also looks generally very good with John Marshall (helped on inks by a name we’ll discuss shortly) getting some nice dramatic images out of moments like Shockwave getting a flaming sword in the chest or a visual callback to the film of Megatron with his fusion cannon against Ironhide’s head. Which goes better for Ironhide this time.

However, things quickly stumble to a halt as suddenly the Mayhem Attack Squad run away, off-page. Apparently not being that tough after all. And then Megatron and Shockwave run away, off-page. And Soundwave runs away off-page (presumably, there’s no sign he’s been killed or captured at the end). And it would seem all the Decepticons in the base also took the day off.

The ending of Starscream cheerfully agreeing to help Snarl for his own ends is rather fun, but this will never be mentioned again. Come to that, the entire Decepticon leadership struggle will never be resolved as the next and final arc moves into a diversion and the only hint of what happened after this being Starscream and Soundwave playing Pinky and the Brain together again. That means this is the last UK appearance of the series original lead villain, with Megatron running away very quickly like his TV counterpart. Shockwave doesn’t do great for a British exit either. All of which results in a poor read, making this the first issue in a good long while where the US story has surpassed the UK. 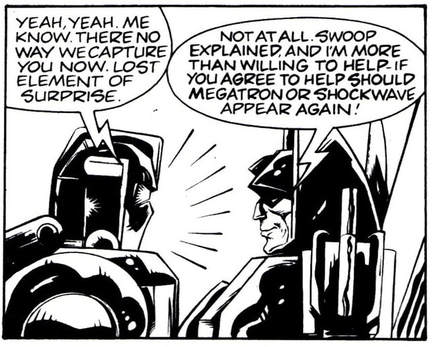 Those two guys.
The other thing to note is that the inks represent Jeff Anderson’s final contribution to interiors. He’s been there for almost the start and last run through every iteration of the book through to nearly the end. He has been the backbone of the series and though perhaps more solid than spectacular he’s been a key part of the series success. There will be covers and a return for ReGeneration One, but this is very much the point the UK stories start winding down.

Transformation is very excited about ploughing through the remaining AtoZ’s quickly (Twin Twist and Ultra Magnus are covered this week) so as to get on to “New” characters around the issue 300 mark. There’s also an odd and rather a long way in advance attempt to create anticipation for the book’s sixth anniversary. Or, as it says, the six years and three days anniversary issue 289 will be published on. I wonder if there’s a subconscious reason to draw attention to that particular issue?

We get a second, more minimalist, advert for the Ghostbusters Puzzlebuster, suggesting Marvel were really throwing some weight behind that.

Combat Colin decides to rebuild the Combat Shed after the Combat Cardboard Box isn’t working out. Resulting in one of my favourite visual gags of the series as he starts with the roof, held up by the struggling Giggly Sisters. Resulting in my Giggly Panting. His final effort isn’t great, making it lucky new villain Coal Man (made of living coal) attacks and sets off the over rigorous explosive burglar alarm. Meaning they’re left with no shortage of coal, making it a shame they only have a gas fire. 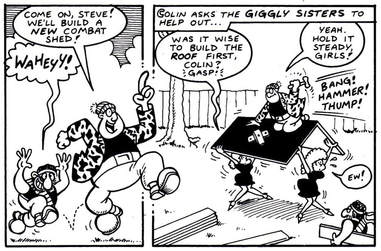 Brexit explained.
Dreadwind is mainly concerned with with people writing in to defend things, starting with John McKay of Roslin talking about how great G.I. Joe is. Larry Hama, is that you? Andrew Steel (great name) of Helperby also weighs in to point out that, despite what Andrew Dornan claimed in issue 278, AtoZ is a great and useful tool to the majority of readers who don’t have Universe and haven’t bought every toy since 1984.

The highlight though is mother Stevie Potts of Wednesfield asking for help with her five year old, who thinks he’s a Transformer and goes around dressed as Dreadwind. For which he even won a prize at the local fete.

G.I. Joe: The Action Force starts a new adventure from issue 70 of the parent book, Fair Trade. Which opens with a nicely executed crash scene of the high-jacked plane that mainly serves to show Wild Bill, Hull’s finest, takes no shit.

Next week, on Thursday as I’m going away to celebrate the 30th anniversary of The Rebirth, the final phase begins. 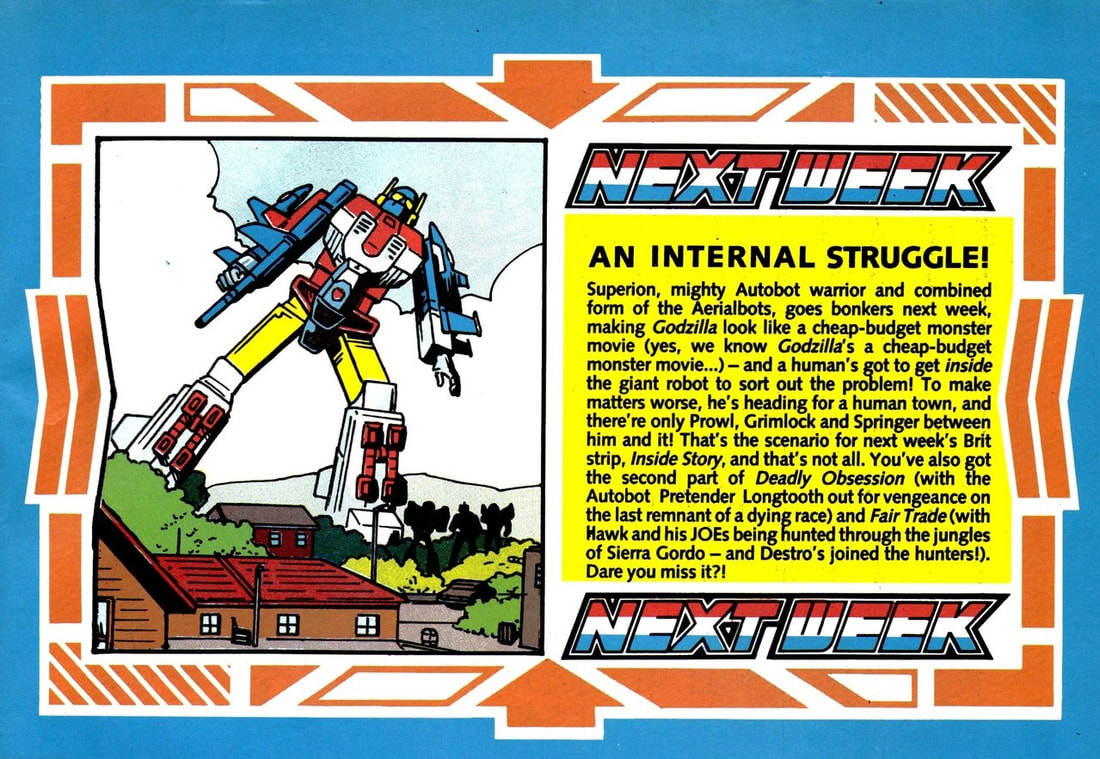