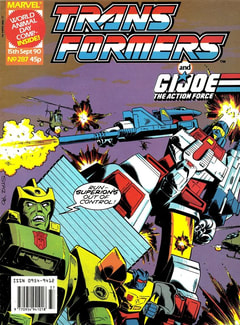 
King Kong? Godzilla? Where have you guys been?


A quick heads up for anyone in London tomorrow (November 10th), I’ll be at the James Roberts/Jack Lawrence Orbital Comics signing, probably towards the end of the time it’s on. If you see me, come say hi!

So now we’re really into the final stretch of the UK stories, with a Stewart Johnson cover where a Springer in desperate need to switching to decaf looks on in horror as he realises we’re starting the final home grown arc of the series.

Oh, and that Superion is out of control, but that’s not quite as terrifying really, is it? 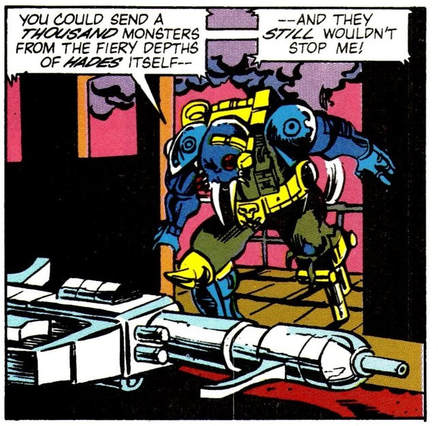 He doesn't have a leg to stand on.
If the first part of Deadly Obsession showed the advantage of cutting up American stories by giving up a good strong chunk of a variable story, then the second shows how this approach can fall down as we get the bulk of the issue devoted to Walrus Harbour Man! A character who only exists to quote bits of Jaws (see, the Moby Dick thing has already run out of steam) and deliver exposition about how the extinct SPACE whale the klud has suddenly come back and started eating tourists. Which doesn’t please the tourist board, meaning there’s a massive reward for its death. Which is where Walrus Harbour Man exits stage left, no doubt going off to compare different scars with Robert Shaw.

This allows Pincher and Doubleheader to take up the exposition as they clarify to a disinterested Longtooth that Xaaron told them to keep an eye out for weird shit that could be caused by the Matrix.

The flashback over, we then cut back to the fun stuff as Crazy Longtooth is stopped from killing the klud by Thunderwing’s ship diving in and deflecting the harpoon (just like in Star Trek IV), letting us have yet more fantastic purple prose from the Pretender. Which gives us the real highlight of the issue as Thunderwing gives Ruckus a good solid backhand for making a joke about the Decepticons saving a life, accompanied by a straightforward “Shut up!”

However, whilst this is entertaining in and of itself, it does strike you that we’ve not really had a proper decent for Thunderwing’s obsession to show how he went from being polite to cowboys and not killing Dogfight in the last story, to slapping his own people around here.

Despite a reasonable finish this is a fairly perfunctory instalment that’s so exposition heavy it becomes rather a bore. With only a little bit of insanity to draw, Delbo falls back in to being more awkward in his compositions as well. 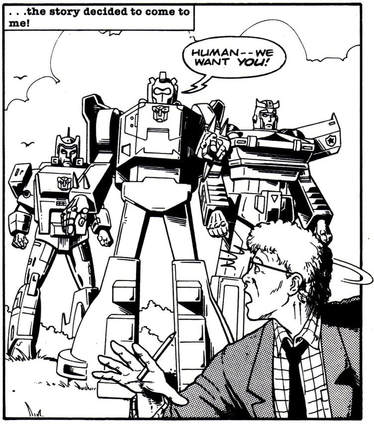 IRWIN SPOON.
Of course, it’s hard to talk about British story Inside Story! without acknowledging the weight of this starting the final three parter for the UK series. And what a strange three parter it is, suggesting that even at this late stage it was not expected to be the conclusion. Though even not being entirely sure of that you have to wonder what Furman was thinking devoting three issues to the adventures of Irwin Spoon rather than any of the dangling plot threads when the axe could fall at any point.

Yes, Irwin Spoon. He’s not actually given his surname in the strip this issue (though it does make it into the Next Week pitch), so you’ll have to wait for my full take down of that ridiculous name. But it’s fair to say not a single reader was thinking “Boy, I hope we get lots and lots of a whinny journalist who looks like the long lost twin brother of Robot-Master. That’s what this book has been missing for sure!”

The shame of it is, this part has a good premise that fits in nicely with the film spoof of the lead strip. Indeed, the premise is such a solid one the cartoon did it five years earlier: Transformers Fantastic Voyage. Superion has gone nuts thanks to a cerebro shell, and will destroy a town unless someone very small and tiddly can get inside, fight past he defences and pull out the shell.

Luckily, it turns out that a giant robot made of jets going on a path of destruction towards an innocent town is a big enough story to attract one news journalist. Who only turns up because he’s desperate to get his “Man bites dog” story after a mediocre career. Christ, six years of Transformers attacks have really numbed the American public to this sort of thing hasn’t it? Mind, this is one of those stories where how much people have actually noticed about their war on our planet is in a state of flux as the giant robot is treated as an unlikely bit of nonsense before Irwin Spoon sees it. 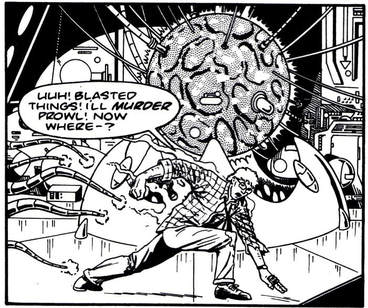 IRWIN SPOON.
The plot intercuts between two threads, the fun SF idea of Irwin Spoon fighting through a robots insides (I wonder if this was inspired by Spike’s dreams in The Man in the Machine!?) and flashbacks to him having to have his arm twisted into doing it by the Autobots with the promise of an exclusive interview with Grimlock. Yes, the entire population of a town about to be squashed isn’t enough to motivate Irwin Spoon, he only cares about his career. Lovely fellow.

There’s one good gag of Grimlock “forgetting” to have told Irwin Spoon about the most dangerous of the internal defences, but the need to introduce and motivate the human means we don’t get nearly enough of the bonkers stuff. Frankly, Microbots did it better by realising what the actual appeal of this sort of story was. If it had saved time by sending one of the smaller Autobots in (why not contrive a visit from Rewind?) Pete Knifton’s fun art could have created a pleasant enough diversion. But as it is, it falters.

About the only real thing going for it is letterer Stuart Bartlett having Irwin Spoon’s narration be in typewriter print. Though probably of the sort no actual journalist was using in 1990, they’ have all been on to word processors by that point surely? Though I suppose Irwin Spoon is not a flush fellow. 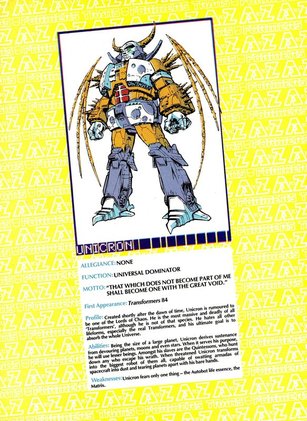 NOT IRWIN SPOON.
Transformation does lots of “Inside man” style jokes and thanks Andrew Wildman for last week’s cover whilst confirming he’s been working on the American strip. The sidebar also promotes the tie in comic for that much loved kids film Robocop 2.

AtoZ covers Unicron, slightly rewriting his Universe profile to clarify he’s a transforming robot, but not a Transformer and adding in a reference to the Primus backstory. Which feels like the sort of effort that’s been missing from the book for a long time.

In keeping with this general theme of competence (and it’s worth noting that though I’ll be treating the end of the UK original era as his departure point, Euan Peters may have already left the book), Dreadwind has some reasonable answers to questions! Even when dealing with Master Mouth, who has wound up living with a human called Andrew Holmes in Edinburgh, he’s helpful enough to explain a forthcoming US strip drawn by Andrew Wildman will explain how Megatron is up and about in the British stories despite having died with Ratchet.

Alright, it won’t, but presumably Dreadwind wasn’t aware of all the stuff that was going to come afterwards, and it does at least give a big hint as to where the UK team thought Earthforce was placed.

Liane “Tetra Reris” Elliot of Gig Harbour (I wonder if the harbour master is a walrus?) America also writes in to explain their frustration at the comic no longer being distributed in America and asking for their full address to be published so UK fans can get in touch. Dreadwind is happy to do so, but makes it clear he’s not getting drawn into any fights about distribution. I believe this is also the first confirmation Titan, future publishers of the UK film comics, handled the book’s sales in the US. 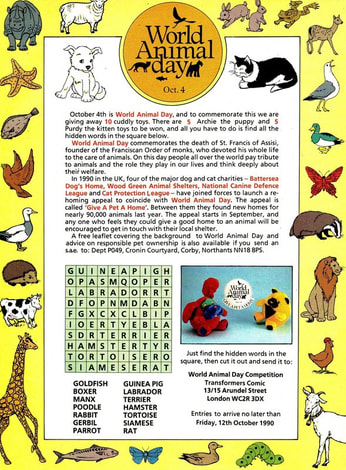 Cuddly toy!
And finally, a familiar name to both Dreadwind (who welcomes regular writers) and current UK fandom, Steven Mapes of Ashford explains what Five Faces of Darkness is and points out a huge error I missed, Starscream being called an Autobot on his AtoZ. Dreadwind is grateful for the cartoon help and quickly reads off the toy specs for the Pretender Monsters and how they’ll be in the comic in November how he knows who they are.

Combat Colin starts a new epic with The Secret of the Combat Trousers!, where he rescues a young woman from having her handbag stolen by Madprof, only to find out she’s the third Giggly Sister, Jane! Leading to a great awkward explanation (“We were born at a very early age, so you probably forgot!), before it turns out she’s actually the brunette Jane Bondski and working for Madprof!

G.I. Joe: The Action Force sees Destro paid a lot money to have after the ambassador with the compromising files, which are now being walked through the jungle. And we get a little more of Hama’s lovely politics as said ambassador being disgusted at the fact the Joes have previously been messing in South American politics is presented as him being a dick, even though history would now very much be on his side.

More exciting is a World Animal Day (October 4th of course) competition to win some cuddly pet toys and promote the new Give a Pet a Home initiative. Ravage would be pleased.

Next week, back on Friday, even though it’s my birthday: More Irwin Spoon! 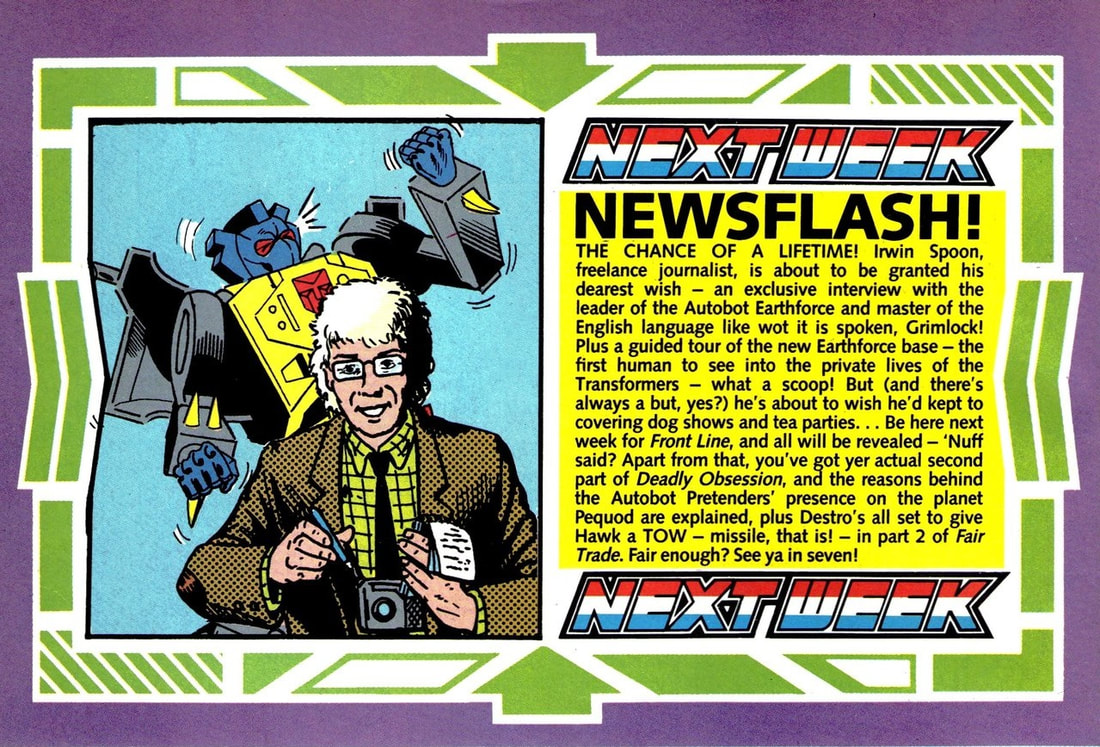