You'll Never Be a Sailor if Your Balls Hang Low. 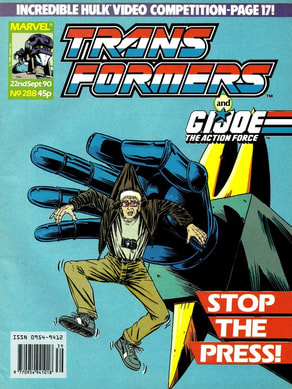 
Happy birthday me! Yes, what a dedicated hero I am, still bringing you Transformation on the one day of the year I don’t work. Last weekend was of course the Orbital Comics signing, and whilst there I was lucky enough to see the original cover art to issue three of the UK comic, which Jerry Paris recently rediscovered and Orbital employee Jim Wilson was lucky enough to buy. Have a gander at it in THIS tweet. And if you’re reading the Hachette partwork, the original script extracts for Space Pirates! are down to Jim as well, top fellow.

One topic of conversation in the pub after the signing was based around deciding what the worst Marvel cover was. And this week’s would have to be a strong contender. A comedy human held in Grimlock’s hand whilst he gurns like Sylvester McCoy, with a “Stop the Press!” tag-line that only makes sense if you already know Irwin is a journalist (the camera around his neck could just as easily mean tourist). Not a great pitch to floating readers. 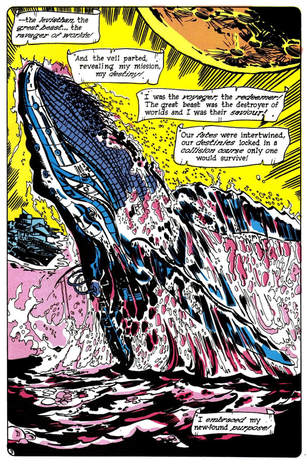 Turns out they needed a bigger boat.
Nor it has to be said is the third part of Deadly Obsession. Though it does start with a nice moment where Spinister, having seen Ruckus get a backhand for his backchat, cheerfully obeys Thunderwing's order to protect the creature whilst still getting in a sly gag about his deep rooted love of conservation. And there’s also an entertainingly clunky title drop as Thunderwing sets them to stop the Autobots getting Matrix clues and Spinster wonder to Needlenose if their leader has a DEADLY OBSESSION.

Between that though is the concluding flashback showing how Longtooth went a little nuts. Which shows he was a little too cocky when investigating a boat where the crew were eaten and in turn gets his leg bitten off by the SPACE whale. Which does result in a fantastic splash page of the klud raising up out of the ocean and Longtooth’s ye olde narration kicking in.

But it has to be said it all feels a bit pat, and how this one legged crazy man outwitted his colleagues to steal a boat and go Ahab is completely glossed over and could perhaps have been fitted in if we’d skipped the Jaws pastiche. Though we are told Longtooth escaped (somehow) after being repaired, meaning a peg leg is apparently standard Autobot medical practice.

Also, having no memory of what it looked like, I’m surprised Doubleheader’s inner robot only has one head. So what was he called before he became a Pretender? What’s with the whole two heads arguing as if they had their own personalities? There’s a whole comic in that. 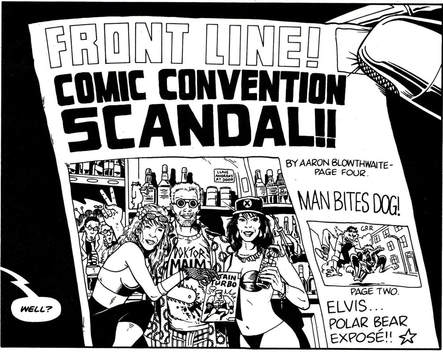 This is close to 1/5th of the penultimate British story.
The penultimate British story in a notable example of the series filling time to turn what was at best just over a two part story into three. Starting with two thirds of a page being given over to a gag of a faux tabloid newspaper cover proclaiming COMIC CONVENTION SCANDAL!! with what is either a writer or an artist surrounded by two half naked women under a sign saying “Leave anoraks at door”.

I’m mildly curious as to who either Furman or Pete Knifton based the creator of Doktor Maim and Captain Turbo on as presumably it’s a Marvel UK insider joke. Possibly Knifton himself? Gags down the side referring to the Furman’s insistence in putting polar bears in every Earthforce story (with some Elvis connection!) and a callback to Spoon’s obsession with a man bites dog story last week are more subtle, but it’s still a waste of space.

Plus of course, comic creator’s behaving inappropriately with women at conventions isn’t as funny seeming now as it might have been in 1990.

It also makes the story look as if its called Front Line! Comic Convention Scandal!

Squeezed in to one panel below this is Soundwave showing off the paper to an understandably unimpressed Starscream. Yes, they’re back together with no explanation. Which almost makes you wonder if this and the last three part arc were run the wrong way round as the other option would be no one gave a fuck. Worse, this issue is Soundwave’s last UK appearance. 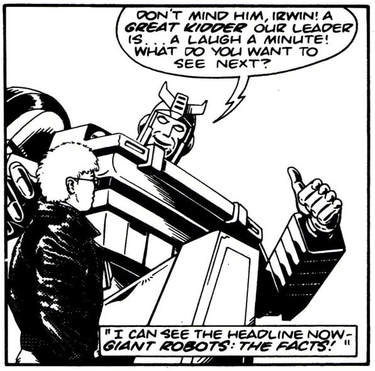 Creepy as hell.
Over at Earthforce (complete with polar bears) we see how seriously Spoon takes his interview with an alien as we never see a Dictaphone, nor is he bothering to use the camera around his neck. Other than Grimlock being slightly grumpy and Prowl trying to be a bit too cheerful (which is a good gag for his character) nothing is done with the idea of an interview either, which is odd as it’s such a standard narrative device for a series to do The One With the Journalist, indeed the current Optimus Prime comic had one of its better issues structured entirely around a Jazz interview. Spoon might as well be the base’s new toilet cleaner for all his profession relates to what he does here.

At the Decepticon base, Soundwave and Bombshell (calling in from outside Earthforce) recap to Starscream things he already knows about how Superion’s rampage from last week was part of Project: Fear, a scheme to destroy any attempt by the Autobots to make allies with humanity.

Which is odd as its been years—all the way back to Spoon’s near twin Robot Master—since the Decepticons have had any plans like this and at no point has there been any hint of nearing Autobot/human relations. Or even the slightest indication Grimlock would care to make such a thing happen. All of which creates the feeling of a set up spun from nothing.

Luckily for Soundwave, Irwin decides to step outside with Prowl and Grimlock for a minute and all the base defences and early warning are apparently off, allowing the Stunticons to sweep in and grab Spoon! Creating the horrifying cliffhanger of the threat of another week of this. Meaning the forthcoming end of the UK stories is starting to feel like a mercy kill. 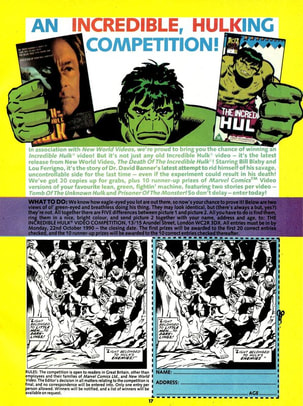 Don't make him angry.
Transformation is rather dismissive of the British story, putting a sneaky “Remember him?” after Irwin Spoon’s name (he’s still not actually been named fully in the strip, you’d think someone had realised it was a very silly surname). On the other hand, it is deeply keen to promote Death’s Head: The Body in Question, both in its serialisation in Strip and the forthcoming graphic novel. Get The Chronicles of Genghis Grimtoad at the same time kids!

AtoZ covers Vortex and Warpath and in Combat Colin Jane Bondski tricks everyone into going for a swim at the beach (Semi-Automatic Steve wearing a big box due to having no costume) and reaches into the Combat Trousers... to find an entire dimension in packed with weapons and very protective robots.

It’s worth noting it would be 16 years before Doctor Who would do the same gag about the Time Lord’s trousers.

Jane quickly escapes, but is so traumatised he hands herself in to prison. But now Colin is prepared to tell us his secret origin story!

G.I. Joe: The Action Force get into one shoot-out that sees Ambassador Ass wounded and their guide killed, and the issue ends with another as the local troops are forced to attack the house our heroes are held up in despite it meaning running over open ground that makes them easy targets. Those nasty South American governments, I guess it’s good the US tries to overthrow them.

And one day he would give those heart-felt thanks in person.
There’s also a chance to win The Death of the Incredible Hulk on video, with runners up prizes of a tape from the cartoon, by spotting the difference between two seemingly identical panels from issue 189 of the American Hulk comic (and thanks to Simon Williams for answering my question about that in 3 seconds as he knows his Hulk).

I’ve saved the best till last though, and apologies to everyone else who wrote in to Dreadwind this week, but it’s all about a young 13 year old from Guernsey called James Roberts. Who in a letter that is SO James Roberts ("But now I have got over that and am beginning to sleep at night") is complimentary about Matrix Quest but, whilst being keen to point out its better than reprints, calls the Joe crossover dull. Which to be fair, Dreadwind agrees with. He’s also more informed about the Death’s Head graphic novel than the editorial was.

Most gloriously though, Dreadwind slyly mocks the verbosity of James’ letter (which, with response, takes up over half the page) by calling it a “Very concise letter”. And that’s the sound of every artist who has drawn a Roberts script thumping the air.

It’s worth noting that this is the second week in a row with prominent fan names in the letters (and I should say that as well as Steve Mapes, Liane Eliot has also remained prominent in the community and is the only person to have had letters in the UK and US comic, plus G2. I should have recognised the name), which makes you wonder if people who are going to stick around are now the bulk of the readership and we’re going to be seeing a lot more of this.

Next week, it’s the end of the road. But is it a highway, or a cul-de-sac? What a shame the final Next Week page with a British story to promote uses art from this issue rather than the actual last story. 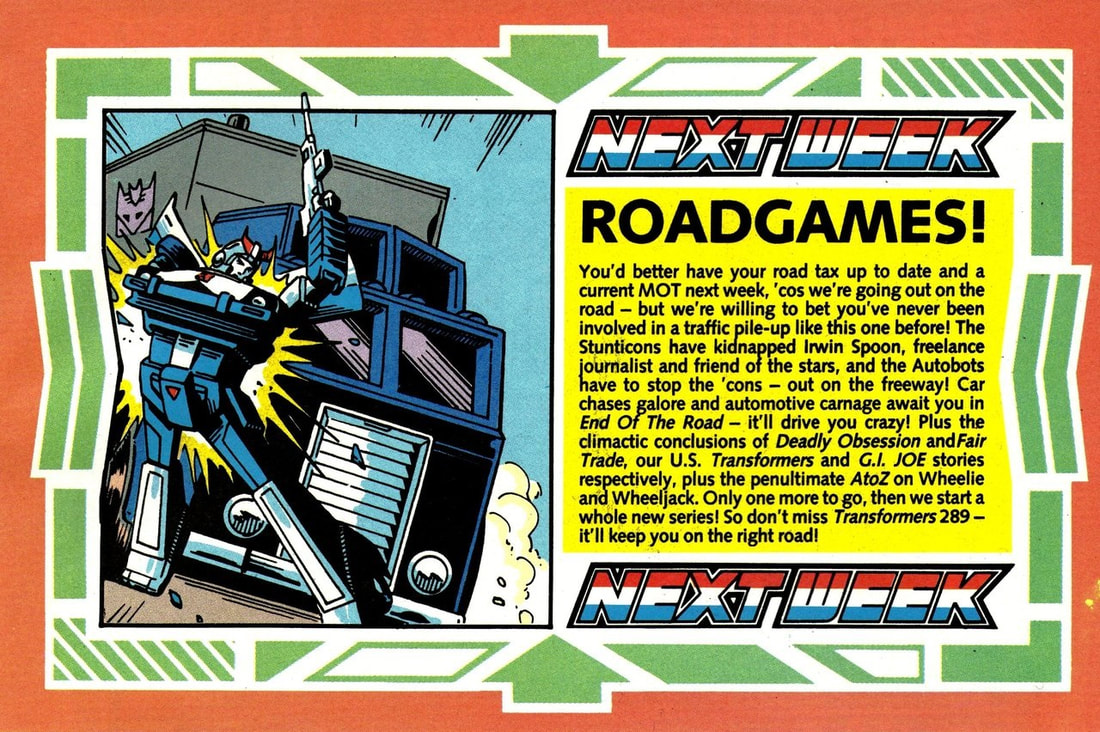