The Writing's on the Wall. 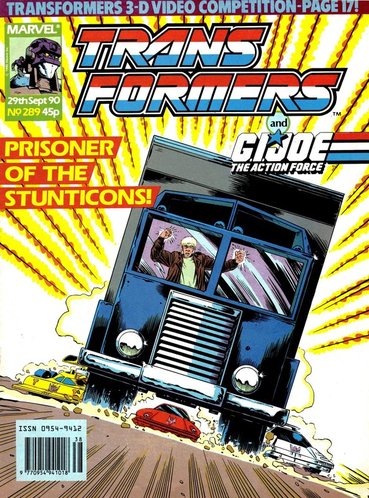 
My name’s Irwin Spoon. Right now, I want out!


So here we are. Despite sharing the book with the American stories, it’s fair to say that the British have very much been the focus of the title since Ian Rimmer’s time as editor. They have been treated as bigger and more important than the US (to an often ludicrous extent) and even in this era where they’re in the back half and black and white they still get the attention of the covers and editorial.

This means their end has more weight to it than it otherwise might considering the American stories are well on the way to being entirely overtaken by the British team. We’ll still be getting adventures written by Simon Furman and drawn by Geoff Senior (and soon Andy Wildman) and certainly the comic itself is presenting itself as business as usual, but in reality things will never quite be the same again.

The other thing to note before diving into the contents is that though it may not be his actual last issue, this marks the effective end of Euan Peters’ time as editor as the format he introduced to try and save the book is given up on. It’s fair to say his tenure has not been a success, albeit mainly for reasons to do with the brand’s decline in popularity that were beyond his control. Indeed, you could argue that keeping the title’s going for close to two years before it having to become a reprint only title is an impressive feat in and of itself.

But equally, there have been decisions made that seem deliberately designed to alienate readers. In particular the antagonistic way the format switches and reprints were handled, and of course the near total failure of Dreadwind’s time on the letters page. I think the biggest stumble in his era though, despite being done with good intentions, remains the G.I. Joe crossover. I don’t think it’s a coincidence the original content ended so soon afterwards, indeed I think we only got eight extra weeks because of a combination of lead in times on already commissioned work and that they possibly wanted to make the switch to focusing on the American stories on a good strong entry with popular characters in it. 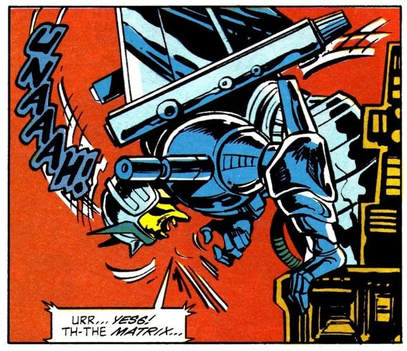 Matrix affinity. Like gas.
Indeed, it’s hard to imagine the UK team would have been desperate to put Longtooth on the cover for a third time, and Deadly Obsession rather meekly stumbles to its end with a shrug. There’s a brief battle between the Cons and Bots before Thunderwing uses his natural Matrix affinity (I think the first time this idea has been mentioned, though the fascinating concept of a Decepticon chosen one is thrown away here) to mind meld with the klud and discover it ate an escape pod from the fourth moon of the planet Cameron, VsQs (more of that next week).

Meaning he calls off his boys so as to go straight there, much to the annoyance of Spinister and Needlenose who drop another title drop. They need to learn less is more, Timothy Dalton only felt the need to say The Living Daylights once after all.

Meanwhile, Pincher persuades Longtooth not to kill the klud. A moment given so little significance that Longtooth actually makes the decision off-panel. To say the story ends on a bit of a damp squid would be an understatement.

I think the issue with this story has been how the tone has flipped back and forth. The previous two stories, even the weaker cowboy one, fully embraced the style they were paying homage to throughout. Here though we keep switching between the fun Longtooth POV pages with the full blown narration and entirely normal scenes that don’t have anywhere near the same level of interest. And those pages win out in the end. If this had kept to its guns it would be a lot better, instead it winds up rather forgettable and entirely throwaway. 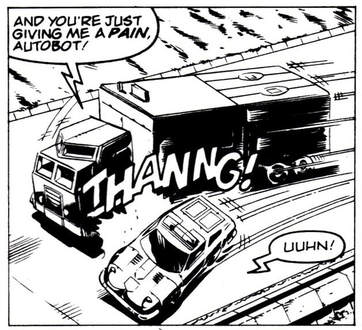 "Bye Euan!"
Which is what would be said about the British story as well under normal circumstances. But these aren’t normal circumstances and it being the finale for the UK gives us a lot more to talk about. So let’s get the least interesting bit out of the way first: The strip itself.

So a team of Earthforcers led by Jazz (I hadn’t realised Grimlock made his last appearance last week as well) give chase to the Stunticons, smashing them off the road and rescuing Irwin Spoon. Who has changed his clothes from last week. But in a shock twist Bombshell got to him first and thanks to a cerebro shell, the piece he writes on the Autobots portrays them as naughty boys who kidnapped him to try and blackmail the president! Which shows a comedic amount of ego there.

In theory this is a dark and downbeat ending for the local stories, but as said last week the attempts to blacken the Autobots good name feels about five years out of date and moments where Jazz bemoans they’re losing their one chance to restore their reputation make no sense when Earthforce has had such little human contact anyway, and what it has (hillbillies oiling Prowl, them having an emergency phone number the public can call) has been overall positive. 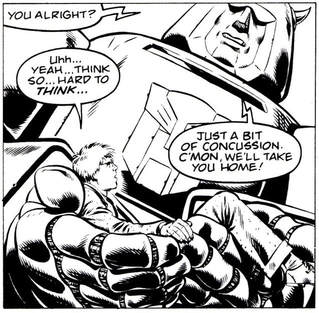 "Don't sue!"
Plus Irwin Spoon, now finally named fully on-page and shown to indeed use an old fashioned typewriter, is such a rubbish character its hard to feel any sympathy for his plight. Throw in some untypical mediocre art from Staz (who seems to struggle with almost everyone staying in vehicle mode, Tracks in particular looks way off) and the best thing here is Bumblebee being all sheepish as he pulls Irwin Spoon out of the wreck of Motormaster.

The more interesting aspect of this is to wonder at what point they knew this was going to be the last one. On the surface, and allowing for it being a coincidence from the Earthforce set up that there’s a good role for several 1984 characters, it feels like this was just written as the next link in the chain without realising there wouldn’t be another, with the last second change to the NEXT box (“The War Goes On...”) as the only concession to the end of an era.

On the other hand though, there’s that title. Furman had already used End of the Road! for the final Dragon’s Claws, so his whim of using that as the title of a final issue is already in his mind. And unlike later uses where it’s more metaphorical, here and in Dragon’s the whole story revolves around a road chase, Furman making the title both meta and literal. That suggests some actual thought has been put into this, which would tie in with the idea of the editor holding off on phasing out the UK stories for a few weeks until there was a strong US one to relaunch the book with, Furman may well have been told “The next one’s the last” before sitting down to write it. 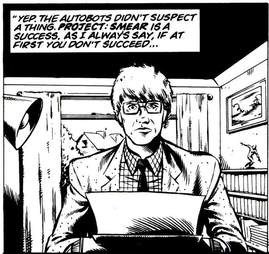 But will we ever see Irwin Spoon again?
Which makes it being so brain numbingly average an even bigger shame.

There’s no mention of the forthcoming changes on Transformation, though to be fair the Next Week page does make a thing of the exciting refocus on the American series. Instead there’s talk about the penultimate AtoZ before the new characters start and the competition. Which results in some bare faced lying.

The competition is for a 3-D video of Desertion of the Dinobots. Now, I know what you’re thinking, “Desertion of the Dinobots wasn’t 3-D!”, and you are correct. This is actually a video with a 3-D cover (of Powermaster Prime no less) and some art cards inside the case. The competition itself is very carefully written so as to not outright lie, but still leave readers for whom this could well be brand new episodes misled. The editorial on the other hand flat out promises the characters will be jumping out of the TV, which is rather unfair on kids who could well be persuaded to go out and buy the thing with their pocket money based on this.

Characters not literally coming out of the screen.
Amusingly considering we’re at the end of this era, the questions are based around the Dinobots Earthforce adventures. And little Alex Walker of Spondon who filled in the answers on my issue didn’t know the name of the illness that “Nearly” killed Snarl. Which is as close as we get to confirmation the transplant with Starscream worked.

AtoZ covers Wheelie and Wheeljack, whilst Combat Colin reveals his secret origin! In what feels like a send up of comic retcons, it turns out everything we’ve been told was a lie and he really used to be Colin Smiff, a man so meek he wouldn’t say boo to a goose. Literally.

Things changed when he became aware of an alien presence. For which read “A UFO crashed into the back of his skull”. The alien picked Colin to become defender of Earth, giving him special trousers and The Big D.I.Y Book of Funny Daft Weapons. Unfortunately it was a second hand copy with a few pages missing, causing unpredictable results. Much to Steve’s chagrin.

Dreadwind gets a letter from an impressive distance this week as Sazril Murshid from Kedah Darulman in Malaysia writes in. For once Dreadwind’s failure to answer questions properly is understandable as they become the first person make the West aware of the Japanese shows, if not by name. The questions are based around the broadcast of the Star TV dub of Masterforce in that country, in particular why Pretenders like Metalhawk can go from human to Transformer sized.

Owen Daly from Clondalkin writes in to put the book into the current format, resulting in a defence from Dreadwind that it’s much harder to do a story in five pages. All of which seems a moot point at this stage. 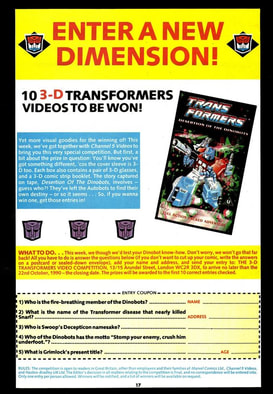 The 3-D has deserted you.
G.I. Joe: The Action Force ends the current story with Destro rescuing everyone, having decided to back the rebels in exchange for trade deals being given to him rather than the North American Banana Monopoly. Which for some reason really annoys the ambassador even though the rebels in charge and the monopoly stopped was what he wanted.

Next week, the Christmas quiz, with an amazing prize! And the new format. 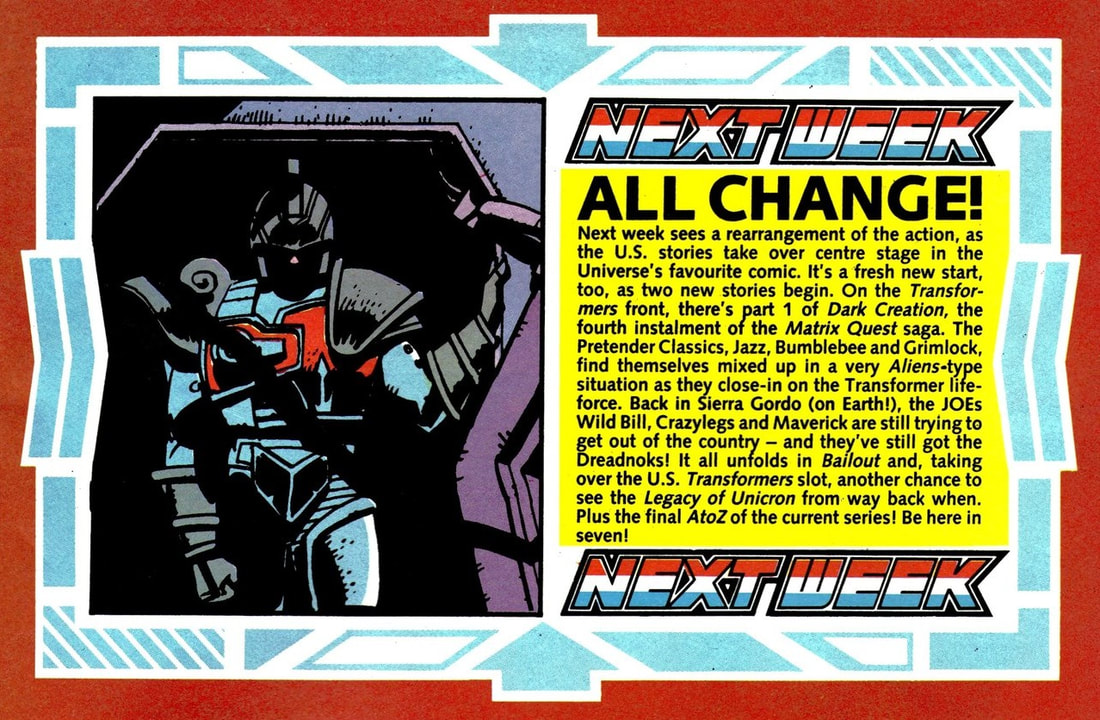 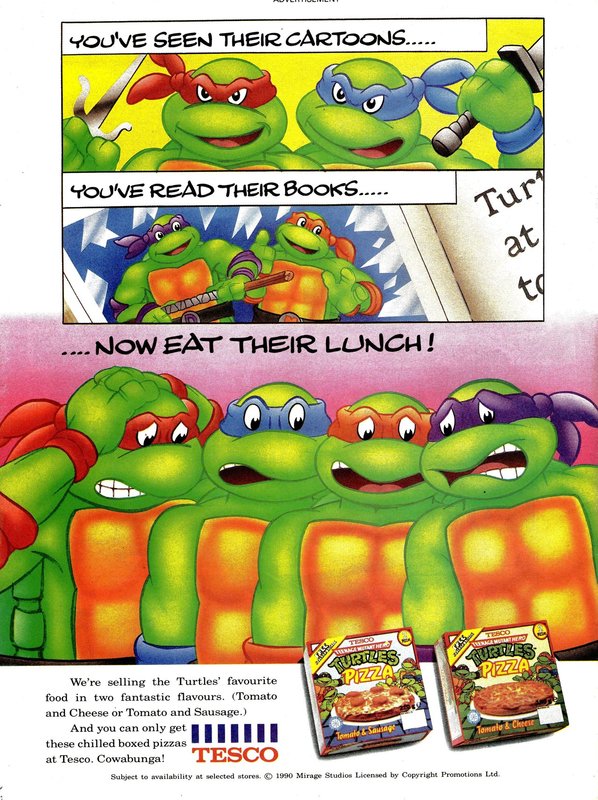