I See a Bad Moon a Rising. 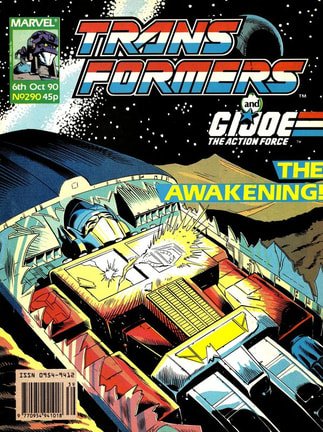 
*And this time the Matrix Quest branding and part number is back.


As the comic starts its final phase as a reprint only title, it’s at least going down fighting and doing everything it can to try and hold on to wavering readers. So we get a nice moody Staz cover of Optimus Prime’s dormant body with a sinister glow emerging from it, with the tag-line of The Awakening! presumably intentionally trying to evoke what is generally regarded as the best episode of the cartoon (and a VHS rental staple already).

As I said last week, it’s not entirely clear when he editorial switch happened between Euan Peters and Harry Papadopoulos (most famous as a rock photographer) happened beyond it being in the late 200s (and possibly with a Staz handled transition period according to my good learned friend Ryan Frost), but if the switch has happened then the man who is only really seen as a caretaker of the reprints by fans is off to a good start.

One odd thing though is how the comic is now presented. Even though it has returned to full colour now it doesn’t have to sustain original content, the decision has been made to keep the cover story as the second strip. Meaning the old reprint—the first half of the opening of Legacy of Unicron!, is the first thing a reader browsing in the newsagent would see. Surely they should have put the story that they definitely wouldn’t have read before at the front? 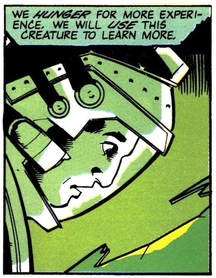 "Gallifrey stands!"
Mind, Transformation talks more about the reprint (even using Death’s Head for the main image on the page), so perhaps someone wasn’t too enamoured by Dark Creation (indeed, there’s clearly been a cut and paste done on the second word in that title when they mention it, I wonder what wrong name they gave it)? Which is a shame, as it’s one of the most striking stories yet done by the series.

For this penultimate part of Matrix Quest, Furman is on more sure ground with his spoofery, at least in terms of how recognisable the joke would be to kids. Of course, none of us should have seen Aliens, but many of us would have. And maybe kids would not have enough behind the scenes knowledge to spot the meaning of VsQs or Cameron as names, but I don’t think you need to be Mark Kermode to get the slug like thing jumping out on to an astronauts face and grabbing hold. It’s a fair bet that in the director’s cut of this story the VsQs base was run by Captain Hollister from Red Dwarf. 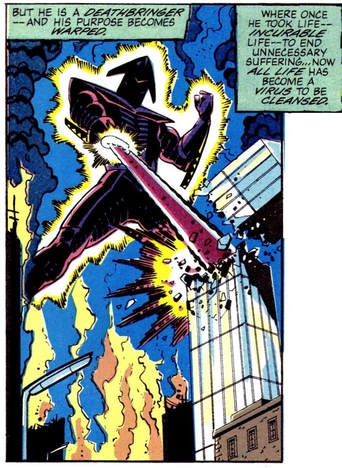 "oh, hi America!"
Before we get to the thing that hugs your face though, we start with something far more poetic and unique: A sequence from the point of view of the Matrix! Which on a fundamental level has become bored sitting in a crater for two years thinking good thoughts (which gives us our first listing of all the Primes with names that all work on the Optimus Prime principal: Prima, Prime Nova and Sentinel Prime. Some serious thought has been put into this by Furman), and it decides to learn more, with a dying alien being the catalyst. The Matrix revives it, sends it off to experience new sensations and winds up creating Deathbringer!

It feels rather random this crossover with the British series happens now, 10 American issues into Furman having taken over that book and indeed over a year since Deathbringer’s British appearance. The American issue was from February so he was only working on them a few months apart, it just hasn’t worked out that neatly for readers on either side of the pond.

The flowery prose and special olde speech narration boxes are of course a repeat of the gimmick from the last story, but here it works better as it feels right for the Matrix, plus the switch to “Normal” storytelling feels far more natural. Mainly because there’s a great strong moment where the styles shift, as a simple little creature crawls into Prime’s chest to die. The Matrix is still keen to try out new experiences and so it reformats and recreates the creature just in time for the VsQs science team to arrive and for Newt’s dad...sorry, the lead astronaut to do the full John Hurt. Across these three pages Geoff Senior gives us the sinister loneliness of Prime’s abandoned body, the quick action of Deathbringer and the full on body horror of the alien attack, all captured perfectly. As a hook to get readers interested after a couple of less effective stories, you couldn’t ask for more. 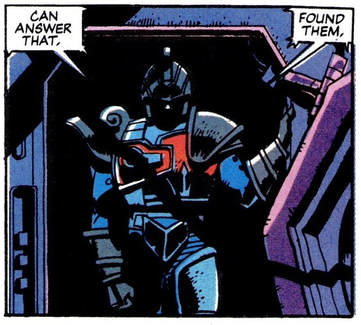 Right at the end, Classic Pretenders are suddenly awesome.
But it’s the final two pages that really show what a talent Senior is. There’s nothing about them what would seem to let an artist show off. They’re just the Classic Pretenders (hey, let’s assume this is after Earthforce!) in the abandoned VsQs base, recapping the need to find the Matrix and looking through the computer. But Senior adds masses of tension in every expression and pose. Especially keeping Grimlock in the shadows as he watches before coming forward to reveal he’s found the base crew and “None of them ever tell anything again”, making for an effective stark cliff-hanger.

This feels like such a bounce back from the last few weeks (both British and American) that it’s hard to credit this is from the same comic that gave us Peg Leg Longtooth. Maybe Senior just brings out the best in Furman, maybe he just felt reenergised for some other reason, but this is where Furman’s American run really hits its stride.

It’s just a shame that the now lead strip is still being split into quarters. In retrospect it feels as if this is the point the book should have gone fortnightly so it could have returned to cutting the story in half, which always worked better structurally anyway. But otherwise, this is a winner.

Well thank God that's been cleared up, now we can enjoy the Earthforce stories without having to worry... Oh,
Transformation continues the trend set by issue 289’s Next Week page by carefully not saying the original British content has been dropped, things have just moved about and by coincidence one of the stories is a reprint. It also oddly makes more of a fuss of Combat Colin and Dread Tidings being back in colour rather than the comic itself.

The sidebar is rather strange in its timing, taking this moment to say lots of people have written in to ask about why the British and American stories haven’t lined up (Megatron being both dead and alive and so on), but everyone should hold on because now there’s a solid buffer zone of American stories thanks to That Bloody Crossover all questions should be answered soon.

For some reason the sidebar is also keen to point out there isn’t a competition this week in a rather sarcastic way, suggesting someone realised this mini-relaunch should have had one and they’re passive-aggressive annoyed about it.

Strangely after making a thing of its approach over the last few weeks, there’s no mention of the final AtoZ to be repurposed from Universe with Wildrider and Windcharger. From now on it’s new (or after 1987 anyway) characters!

Combat Colin in Colour Verses the Mechanical Might of Robocol2 follows up on last week as Colin uses the threat of being shown constant Timmy Mallett to get the name of her employer from Jane Bondski. Luckily Colin is able to use his Holmes like deductive powers to spot Madprof’s hide-out is in the building with a big sign saying “Madprof’s Hide-Out!” on the front.

But Madprof is prepared to unleash CONTINUITY as he’s built a new Combat Colin robot like he did in issues 201-206. Which makes Colin think he’s in for an easy win, only for the bobble hat wearing massive ED-209 looking robot to smash through the wall and give us a “Ooer! Looks like this is continued next week!” from Steve.

And yes, Robocop 2 was in cinemas at this time. 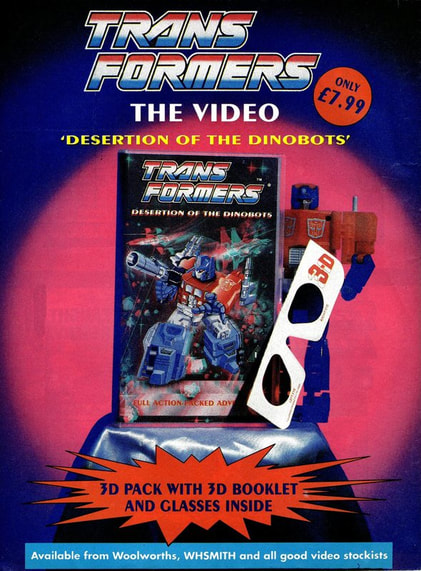 If you missed out on the comeptition, PM Prime is here to help!
The fact that the return to colour makes it into Colin’s logo probably gives us an idea of the lead in time in relation to the new format being decided upon, this isn’t just a strip that Lew Stringer drew and then was told he could do in colour as well, it was planned as such from the start.

Dreadwind gets one of his most straightforward letters as Martin Henderson of Co. Armagh writes in to ask what guns a load of different characters have. Even he can’t mess that up to much.

Derek Scanlon of Dublin goes to the effort of saying they were a lapsed reader who has been brought back in by how awesome the three story black and white format is. Which feels like a letter chosen as a piss take.

Most notably though, considering the editorial, Richard Potter of Cheltenham asks about the continuity between the American and British stories, using the exact same examples as the sidebar. What a coincidence. He also points out both Grimlock and Soundwave became the leaders of their sides after hosting the letters page, which impresses Dreadwind. Though he’s less excited by the idea his time on the page may be up...

G.I. Joe: The Action Force continues what feels like the endless story of their various teams trying to escape from that made up South American country in what was issue 71 of their own series, Bailout. Wild Bill (from Hull) tries to get the team of Joes, hostages and Drednoks from his crashed plane out of the jungle, with Thrasher and Zarana pulling a scam to take over a bus full of soldiers. It’s harmless enough stuff, but the whole thing feels very over-drawn.

Next week, Thunderwing pays a visit. But first, as it’s December now, it’s time for the traditional Christmas Quiz! With at least one very cool prize. So click below to enter and win!