Burning Down the House. 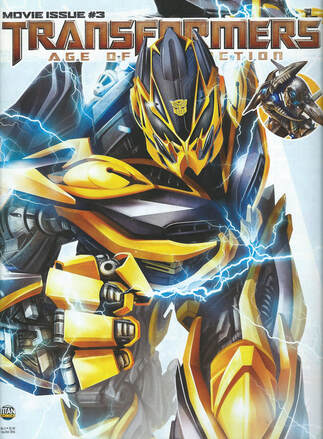 
You see, whilst you mumble and fumble, Bumblebee... I sting!


The fact we have a new writer aboard is immediately obvious from the gratuitous exclamation mark in the title of the story. Welcome back old friend, how I’ve missed you.

Martin Fisher isn’t really going to have much time to make an impression on the book, though he does at least have an episode of the 2015 Robots in Disguise cartoon under his belt to add to his Transformers resume.

Before diving into the comic itself, I do want to point out this fifth volume has really been owning having to use stock art for covers, they’ve all been far more striking than the previous haphazard slapping of CGI models on the front. They have of course been especially helped by this and the previous issue being bagged, so all the text could go on the front of that, leaving the covers nice and clean.

Accept No Substitutes! should in theory be a story that avoids the problem of the last two months by it actually making sense for it to be a prequel, focusing as it does on promoting a toy of a character that died in the film. 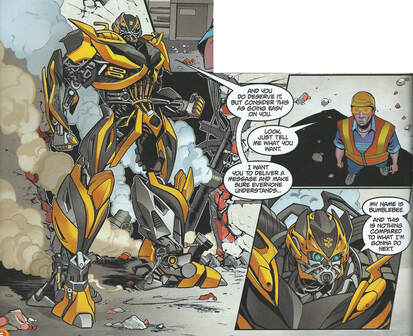 Looks like they've BEEn had.
But, Stinger was a production line product (and there’s a lot of duplication in that final battle), so if you’d this was another model given sentience by Galvatron and removed Prime from the story, this would work much better as a follow up for reasons I’ll go into as we go along.

We open in an unknown area of America (once big difference from Etherington and Furman, who were both always keen to show their mastery of Google Earth), where a power plant is under attack... from Bumblebee! Who is very firm is spelling out that he is Bumblebee and he’s going to do a lot worse.

Cut to actual Bumblebee watching a news report on, err, his own evil acts (which apparently have started following a “Breakout from KSI”, someone should look into that. Followed by a story asking if kids toys are too complicated these days, suggesting Fisher had kids who’d asked for help with their Revenge of the Fallen toys and he was still pissed at failing to work them out.

Bumblebee is all ready to rush into action (on the evil double thing that is, I don’t think he has an opinion on toys), till Optimus Prime phones and directly orders him not to take on this “Rogue” version of himself. 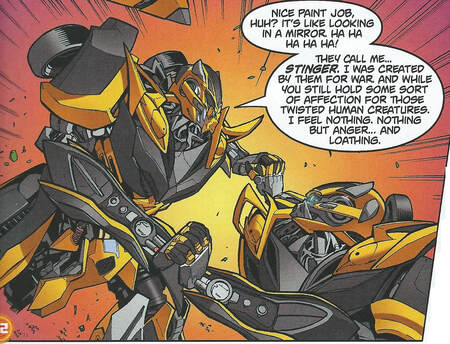 The incredible birth of Double Bumblebee.
I always wonder why commanding officers even bother giving orders the hero will clearly disobey with no consequences anyway. All those Star Fleet admirals who could have had an extra half-hour in bed.

Not that he has much chance to disobey as Bumbletwo strikes first. A house Bumblebee is passing is on fire, with a woman trapped in an upstairs window. Oddly she’s startled by the sight of Bumblebee after seeing reports of him on the news, not because of his evil crimes, but because the new claimed he wasn’t real anyway.

It’s a bit late in the day to be suggesting the humans in the movieverse are unaware of the giant killer robots isn’t it?

The whole thing is a trap of course, with the double striking and revealing that he is in fact... Stinger!

Which makes no sense as none of the KSI robots gained the ability to talk, let along full on sentience, till close to the end of the movie.

More confusion is to be had from the fact that Stinger forcibly solders Bumblebee’s battle mask down so no one can tell them apart. Which doubly makes no sense as he’s about to kill Bumblebee anyway so there’s no need to keep the pretence up, and Stinger was shown earlier in the strip to have a retractable battle mask like Bumblebee anyway.

Stinger, protected by needing to survive to be in the film.
Presumably the written intent was Stinger’s mask would always be down as it is in the film and he’s only repainted himself to look like Bumblebee rather than more cosmetic changes. But it’s still an odd detail to make a thing of.

It’s also a detail that doesn’t help Optimus when he arrives, as he’s confronted by a classic “Kill us both Spock” moment. He’s fully prepared to cut off the head of whoever he decides is the fake, but the decision is made for him as the real Bumblebee rushes rescues the trapped woman after her attempts to escape by herself cause her to fall out of the window.

With his cover blown, Stinger drops the yellow paint job (“Couldn’t stand beeping and meeping anyway”) and makes a mocking comment about how Cybertronians are rubbish in fights anyway.

Which leads to an impassioned bad ass “My ancestor is Primus. A power so huge it can alter the nature of the Universe...” pre-ass-kicking speech from Prime that ends with him...

...telling Stinger to get out of his sight. 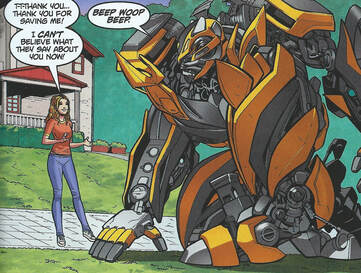 "And I will always remember you... A Woman"
So, his response to “You’re rubbish in a fight” is “Yeah, well, you’d better... run away before I do something”.

And I believe, right at the end, we have our first mention of Primus in Titan as well.

The Woman (who goes the whole story unnamed) is grateful enough that she’s never going to believe what people say about Bumblebee again. Which, considering she didn’t even believe he existed five minutes before isn’t much of a boast.

We end on Prime sheepishly apologising to Bumblebee for not immediately spotting he’s the fake thinking they should probably look into where this Stinger guy came from.

Yeah, I’d get onto that pretty quickly if I were you Prime.

It’s a pity this is hurt by the insistence on being a prequel as, whilst not especially heavyweight, it’s good fun and has more great art from Ponce despite the awkwardness over the mask. Fisher is clearly working from a similar brief to Etherington and Cooper and I don’t think most readers would have noticed the change in writer, but he makes a solid debut and is clearly having some fun. 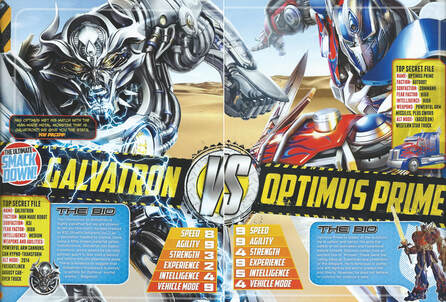 It doesn't mention Galvatron's amazing Walk Away power.
Galvatron introduces the issue this month, making sure to tell you he really is Megatron reborn. Which makes it ironic that, over the page, the Galvatron Vs Optimus Prime only talks about the connection in an abstract “There is evidence to suggest” way. The evidence presumably being their own comic.

It’s also one of the few places outside of ILM’s internal documentation the morphing of the KSI robots is called a “Hypno-transform”.

The advert for Titan’s Hot Wheels comic is especially notable this month as it prominently features a car in Bumblebee colours to try and trick Transformers fans into buying a comic that isn’t Transformers. Don’t fall for it kids!

The Lowdown on Drift talks about his Decepticon past and, again, makes a fuss out of how fast his car mode is. Suggesting that’s one of the few things Titan knew about him.

There are two competitions this month. One for a boxset of the first three films (along with a Bumblebee voice helmet, “Soundbug” and notebook), the second, again, for TOPPS cards. Which, again, asks a multiple choice question (“In which country does the final showdown take place in Transformers: Age of Extinction?) that doesn’t have the right answer as one of the options. 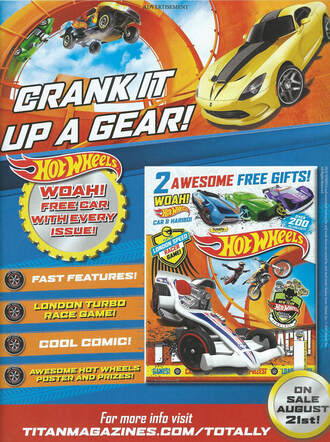 Another fake Bumblebee.
Trouble and Strafe! has Bumblebee chasing around a maze to collect wheelnuts to feed the finally correctly named double headed Dinobot.

A theme that continues past the poster of Prime with the second part of Meet the Real Dinos!, looking at the inspirations for Slash; Snarl and Scorn. With a little quiz asking you to decode the secret message (“Dinosaurs are awesome”).

Crosshair’s Conundrums also wants you to decode a message, from Lockdown this time (“OPTIMUS PRIME WILL DIE!”); recognise the close ups of three Autobots; find out how many times the name “Lockdown” is in a wordsearch and work out which Decepticon logo is the real one on a switch to deactivate a shield.

The Dinobot Wordsearch! asks you to find the names of all the Dinobots and continues the impressive trend of remembering what Strafe is called.

Lockdown’s Letterbox has something of a shock this issue that probably reveals the book’s fortunes. Because I instantly recognised the first piece of fan art of Rocksmasher by Oscar Rotchell (8, Essex).

Because it’s distinctive and fun, it stood out in my mind as having been seen before and a quick Google search of this very site revealed it was previously printed in issue ten of the Prime comic, two years ago. As Oscar is still 6, I can assume it’s not a case of his dad just sending it in again. 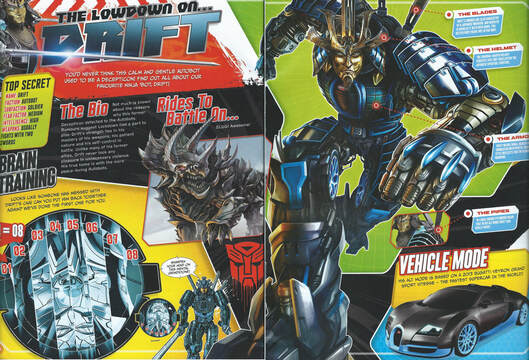 His character is he turns into a fast car.
Worse, over the page, Oliver Dobson (8...err... 10 now rather, Darlington) originally had his far too cheerful Bulkhead printed in issue 12 of the same volume.

Danny Jarvis’ (8...possibly, Bedfordshire) Bumblebee looked vaguely familiar as well, but if it had been used before, I didn’t talk about it as his name didn’t come up on a search. And I’m not sure about Aaron Edoghogho (12... maybe?, Birmingham).

Which means the only definitive recent reader content is the photo of Preston Holland (age 3) with his toys and the final issue of the Prime comic.

So the comic is now so struggling, the letters page can only manage (at best) two pieces of original material and is forced to reprint older stuff for the rest.

I’m slightly baffled by the decision to run art they’d already used. If they had to, why not go through their emails and grab stuff they didn’t print at the time? Or have they been printing everything that’s come in for a while now? Or has the magazine’s inbox been cleared out, forcing them to grab a couple of back issues for stuff?

Considering the two definite reuses both have names starting with “O”, are kids contributions stored in an alphabetised by first name system and they grabbed two that were together? 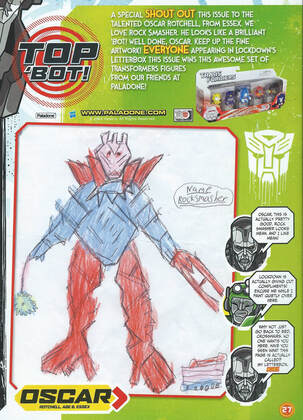 De ja vu.
Frankly, it’s the biggest mystery this blog has come across for a while. And, as I only clicked to it because of how memorable Rocksmasher is, it could have been going on for a while. Unless this is the result of an editorial cockup where some old files got used by accident, all we can be fairly certain of is this is now the point where the book is doomed to cancellation. In the run up to the release of a film that would make a billion dollars, they don’t have enough readers who are interested to get three pieces of art.

Though perhaps its fitting. The 21st century era of UK Transformers began with an Armada comic with fake letters, that it’s winding down with a similar trick is perhaps a sign we’ve come full circle.

Another sign of the inevitable endpoint is that next issue is out a, slightly odd, seven weeks later. So join me next week for the penultimate doom. 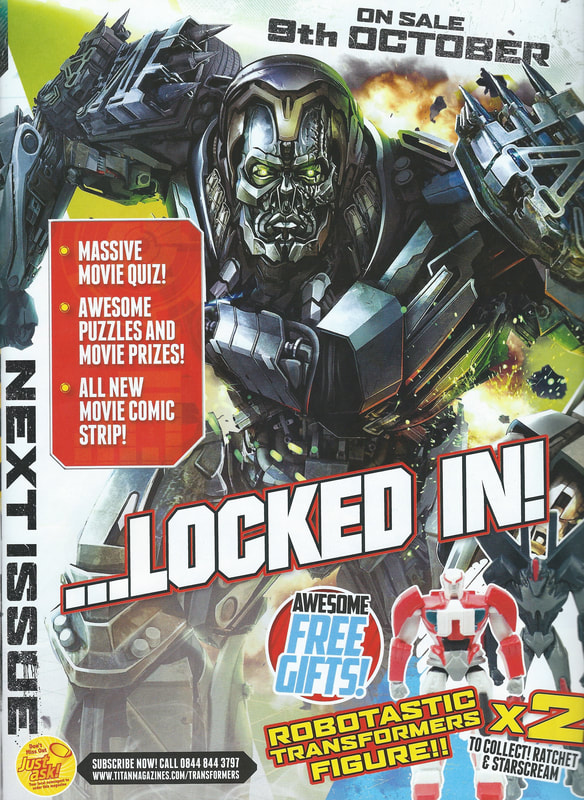