Who Let the Dogs Out. 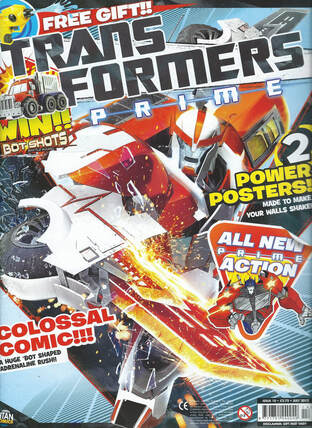 
I came out of rereading issue 10 with a line of attack for this piece all planned out. It was going to be about how, a mere three issues into his time on Transformers, we can already see Chris Cooper has a style and story ideas he really enjoys and likes to rely on to a slightly excessive amount for just three months.

All of which was torpedoed by looking at the Wiki and discovering that Cooper is fact falsely credited as the author of this strip, with it really being Etherington. Who even made a joke on his blog about how the mistake was down to a naughty Starscream.

But, it is fair to say there is a pattern emerging, however unintentionally, between the two authors. For the last two months we’ve had human/robot mergers of one form or another, which continues here with a more standard anime approach that, to my surprise, actually pre-dates Pacific Rim by a year. 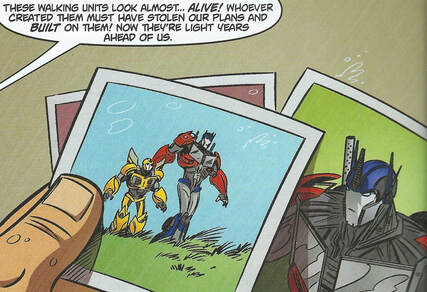 Me when people ask to see pictures of my kids.
In the US capitol, where we’re told decisions are made than “Often make people very happy, very sad or just very, very angry!”, General Rufus “Mad Dog” Madison is being escorted out the building after having been sacked.

Not, amazingly because he’s the sort of guy nicknamed “Mad Dog”. Nor that he’s the sort of guy who refers to himself as Rufus “Mad Dog” Madison in the third person. But because his plan to build... well Pacific Rim style Jaegers. Now, we know the reason why the US Government would not have the need of his services, but when his aid Colonel Leech (being called crazy at one point makes me wonder if this is a bastardisation of Colonel Lynch from The A-Team) reveals a “Pen pusher” called Fowler has his own team of seeming mechs, Mad Dog decides his work has been stolen and he’s going to take revenge...

At Omega One, it turns out that thanks to saving the President, she’s given them some time off. Which Means Etherington has forgotten when he’s been off that she never found out about the robots. Still, the heavily promoted by last month’s Next page but only in four actual panels of the comic, Jack is teaching the Autobots how to bob for apples. Though Bulkhead is having to bob for engine blocks.

It turns out Bulkhead has no gag reflex if anyone’s interested. 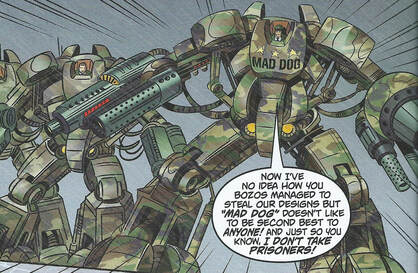 I wonder what his name is?
This jollity is interrupted by pencil pusher Fowler calling to say a “General in the military” has been in touch to ask for help liberating 200 hostages being held by “Hard-line environmentalists” on the oil platform Deep Driller.

It’s actually a nice throwaway detail that of course the right-wing nutjob General would try and use Greenpeace as a scapegoat.

Once aboard the suspiciously More Than Meets the Eye Part 1 looking rig, it of course turns out there’s no hostages, but four mecha (not to be confused with MECH, the reason Mad Dog was making the suits in the first place) robots. The one with our villain in it having “MAD DOG” in large letters across the front.

He’s certainly well adjusted that one.

The following fight is fun, but largely standard and enlivened by the fat the watching back at base Ratchet thinks it’s absolutely hilarious that the Autobots are falling flat on their arses to humans. 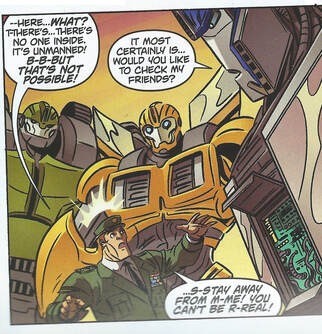 "Look at my nudity"
Still, two of the four are taken down, leaving just Mad Dog and Leech. Which is where Jack comes in with his big suggestion that justifies his heavy promotion as part of the this story last month... saying Prime should just surrender.

Which sounds like a plan to get him killed, but actually works as, when Mad Dog goes to grab the “operator” of Prime and only finds robot inside him, the guy has a complete mental breakdown. With Prime saying to the soldier that comes to collect him that “Sometimes you’ve just got to show people what’s really inside, you know?”

And there’s no way Peter Cullen would ever say “You know” in a casual way.

Still, despite being badly timed after last month, this is another fun one that has some very nice art from Dario Brizuela that gives Optimus some real DILF energy. 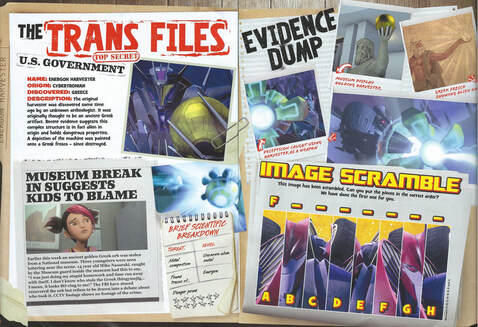 Give the Greek artefact back to the Greeks.
Because the episode guide hits Deus Ex Machina, this month’s Trans Files looks at the energon Harvester, including its history hidden as a Greek artefact (guess the Autobots are like the British when it comes to stealing these things) and getting Miko’s surname wrong.

Which makes a change from her first name.

For the first time in a while, we get two competitions, both using Raf’s code. The first for Bot Shots Battle Game! and the second for John Stephens’ The Emerald Atlas novel. Which is also the first non-Transformers competition in a while as well.

The double sided poster has some very nice 80’s feeling backgrounds to its CGI art of Arcee and Bumblebee.

For some reason, Mega Mouth is in the middle rather than the end of the issue. But it’s all about the OC’s this month. Starting with the cheery waving Elect-Fire by Aiden Connochie (9, Glasgow). Then the less nice Megamus Prime by Adam Fryer 11, Isle of White) who is super tough and amazing and has been wearing Ironhide’s “Armour” (for which read: skin) since Dark of the Moon. And people say the films are too violent for kids.

Oscar Rotchell (6, Essex) sends in my favourite though, the mace and claw handed Rocksmasher. Who’s in a lovely Broadside colour scheme.

And though it’s not an original character, 6 year old Jack Caulfield (Knottingly) makes “Bumle Bee” look like he’s going to fuck you up. 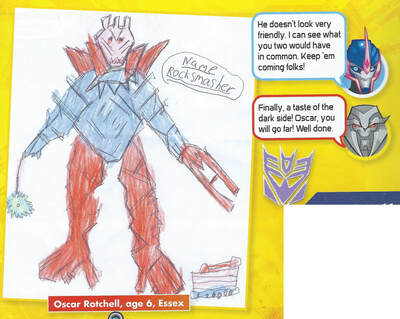 Meet your new God.
Starscream’s Stumpers asks you to spot the differences between two pictures of Soundwave; put back together the “Accidentally” smashed up picture of Optimus Prime and decode the intercepted message from Miko about rock music (“SPEED METAL TOTALLY ROCKS”).

Greek Adventure! ties into the episode guide by asking you to crack a code and follow a map for find an energon mine, before helping Miko escape from a maze.

Next week, can even Bulkhead stop the book going quarterly? 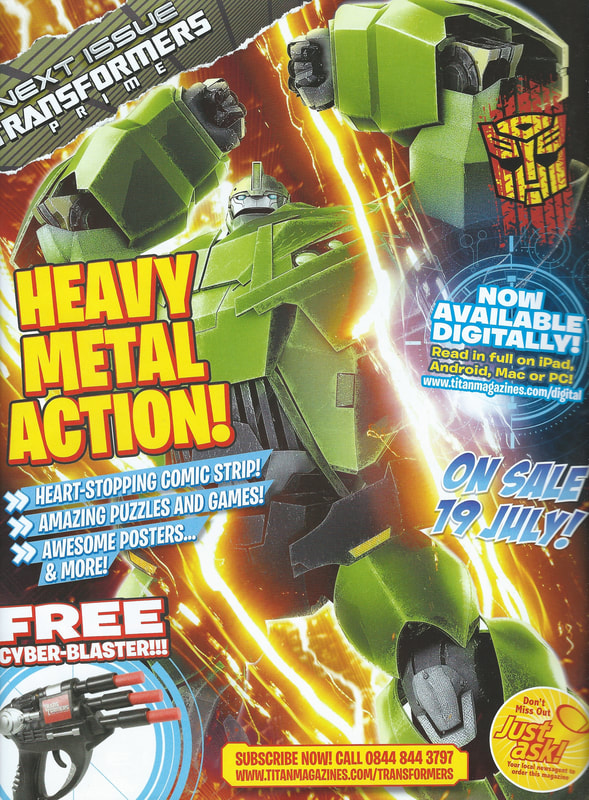