Rescue Me, and Keep Me Far From Harm. 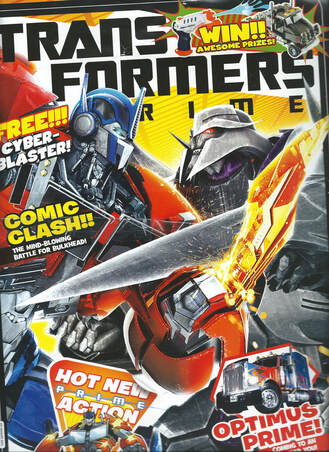 
I believe the human fleshlings would describe this as a baaaad day at the office!


It’s another oversized cover this month, but despite the greater space, Optimus and Megatron and clearly standing closer that six feet from each other, setting a bad example for children.

And I really hope that’s a joke anyone reading this in six months will be deeply confused by.

Now, for those of you who have just read the title of the comic within, you might be expecting me to say the cover doesn’t include the star of this month’s strip. Who is clearly Bulkhead. But things aren’t quite as simple as that in a story that continues the recurring theme of playing with robot minds.

Things do start by looking as if this is a Bulkhead story, with a fantastic full page given over to the slow march of... something over the Alaskan wilderness that may well be “Sasquatch, cousin to the yeti” (a strange way of putting it, why not just Big Foot if you wanted to frame it in a way kids would instantly get?), moaning and grunting and scaring the local wildlife. 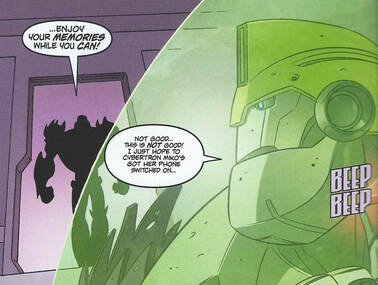 He doesn't even wait till Megatron's out the room to say he's calling for help...
But of course it’s Bulkhead, just out of puff because Arcee is right, he enjoys the snacks too much and is out of shape. He does at least get to be very pleased with himself for having destroyed a Decepticon Energon store entirely by himself. Though it’s a short lived smugness as, in the middle of giving himself a Trevor and Simon style pat on the back, he’s easily overrun and captured by a bunch of Vehicons. With Megatron wanting him tied up.

The kinky sod. As ever.

Aboard the Nemesis, things start to get a little strange as Megatron reveals the energon Bulkhead destroyed was to be used to build the ULTRA prison. Which, somehow, has been built anyway, despite the energon being destroyed. Said destroyed ultra-energon creating a forcefield around Bulkhead that will destroy his memories, “Wiping your tiny mind!” 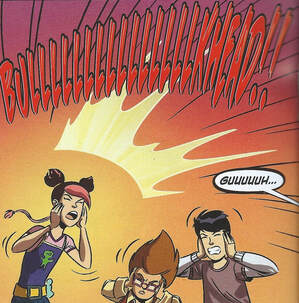 Miko remains the gift that gives.
Which makes it seem like the story is going to be about a ticking clock, with Bulkhead fighting against the machine and struggling to keep his mind as the others come to rescue him. But, strangely, this is where it stops being a Bulkhead story, as once he uses his inbuilt mobile phone (that Megatron conveniently didn’t think to block/remove) to call Miko for help, all he does for the rest of the story is sit and occasionally dribble.

At Omega One, Miko is delighted that the phone she and Bulkhead set up in case she needed rescuing is being used the other way round. The ground bridge to the Nemesis, with the smaller humans going their own way as they can avoid the security systems.

Which, again, feels an oversight from Megatron.
The rest of the story goes as you’d expect, the humans find Bulkhead, fry the shield and everyone escapes. There’s not even any worry about whether his memories have been damaged.

Stop touching the face!
There are three highlights however. First is Miko’s cunning plan to find Bulkhead: To scream “BULLLLLLLLLLLLLKHEAD!!” very loudly.

Second, as some Vehicons prepare to attack Raf as he’s freeing Bulkhead, Optimus just appears behind them, smashing their heads together whilst casually encouraging the boy to carry on being “Foolhardy”. 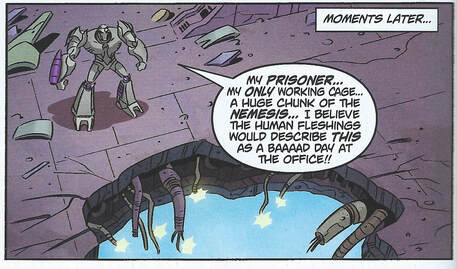 "Let us never mention this again"
The third is an otherwise awkward panel after everyone has escaped where Megatron, alone, talks out-loud to himself to spell out to readers that was the only ULTRA prison (I guess just building another would take a bit of effort) and that’s why it will never be mentioned again. But it ends on a lovely moment of him declaring this a bad day at the office.

Otherwise, this feels rather like Etherington lost his way as he went along, starting with one idea he couldn’t quite make work in the space (maybe an entire page of the Big Foot gag was a mistake) and it all whimpers out in the end. Even with more solid art from Brizuela, this is the weakest strip in some time. 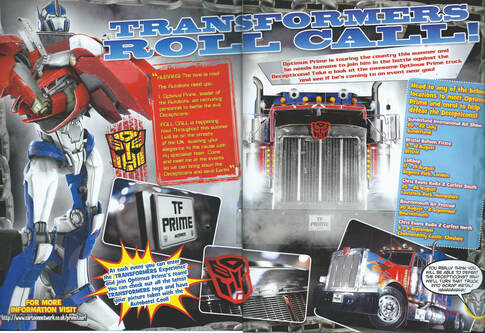 ONLY ESSENTIAL TRAVEL PRIME
The big news this month is a double page spread given over to Transformers Roll Call!, a tour of the UK by the Optimus Prime Dark of the Moon truck, hitting various air shows and bank holiday events.

The episode guide hits Speed Metal, making school bully Vince sound worse than any Decepticon and taking great delight in Knock Out throwing him about like a rag doll.

Inspired by the comic, Rescue Bulkhead wants you to help him out of a maze and spot which of four Bulkhead heads belongs to the real one rather than a Decepticon imposter.

The Raf’s code using competition this week is for two Kre-O sets, including the massive Optimus Prime (the Megatron is the runners up prize). The other first place prize is a set based on the USS Missouri from the movie Battleship. Which, in a fine feet of hubris, the competition doesn’t feel it needs to explain.

Past the double sided Bumblebee and Megatron poster, Ratchet’s Joke Page returns. Including the gem “Doctor Doctor, I think I need glasses”/”You certainly do, madam. I am a giant, alien robot!”

But you are also a doctor, Ratchet.

Art on Mega-Mouth this month includes lots more OC’s. Including Carnage (suspiciously the same colour as Marvel Carnage) by Christopher Silvester, 11 from Middlesex. Then there’s the bat-winged jet Devil Blast by Sarah Gascoigne (20, Chester Le-Street), who used to be a “Pretty fembot” before accidentally scanning both a jet and a picture of the devil for her alt-mode. 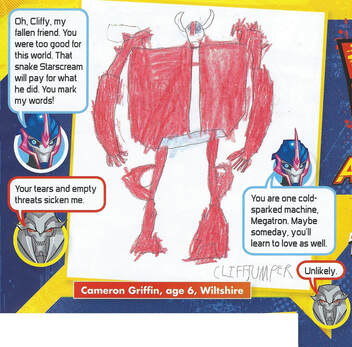 Wide boys!
Don’t you just hate it when that happens?

Rather cruelly, both Megatron and Arcee point out Wheel Not by Rory O’Loughlin (8, Co. Louth) is just Arcee.

Most impressive though is a familiar face, a Cliffjumper by Cameron Griffin (6, Wiltshire) that is such a wide boi he’d easily have stayed in one piece in the cartoon looking like that. When Arcee suggests, after he’s unimpressed by her being happy to see her old partner, that Megatron might learn to love one day, his reply is a simple and hilarious “Unlikely”.

The bigger cover is for a cut out and fold together dice covered in character art that gives you different challenges, like asking you to “What would you transform into if you could?” and “Let us hear your best evil laugh!”. All apparently to make the summer holidays pass faster.

The big thing though is that the next issue isn’t out till October, the comic going four times a year. Which is effectively admitting that Prime has failed to take off in the UK and the goal now is simply to drag things out so they don’t lose the licence before Bay 4.

The next issue won’t even have the fighting Piranacon underwater strip that’s described here. But that’s a conversation for next week... 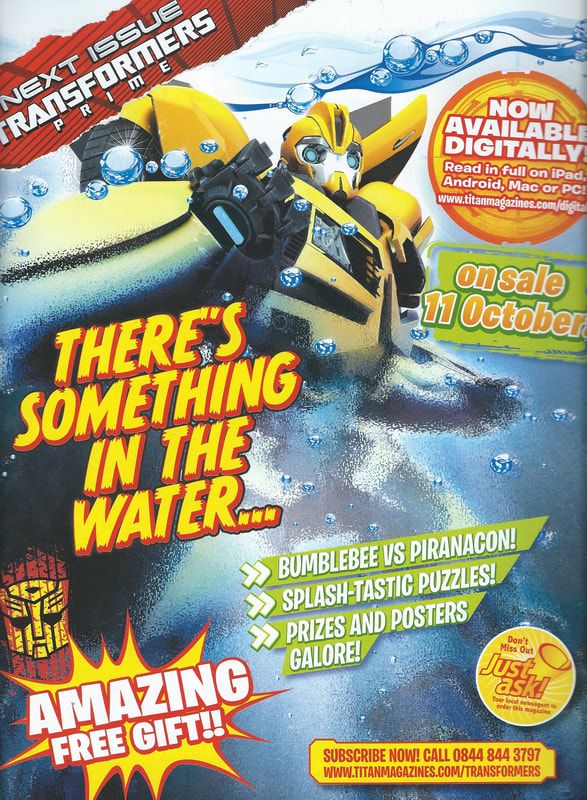