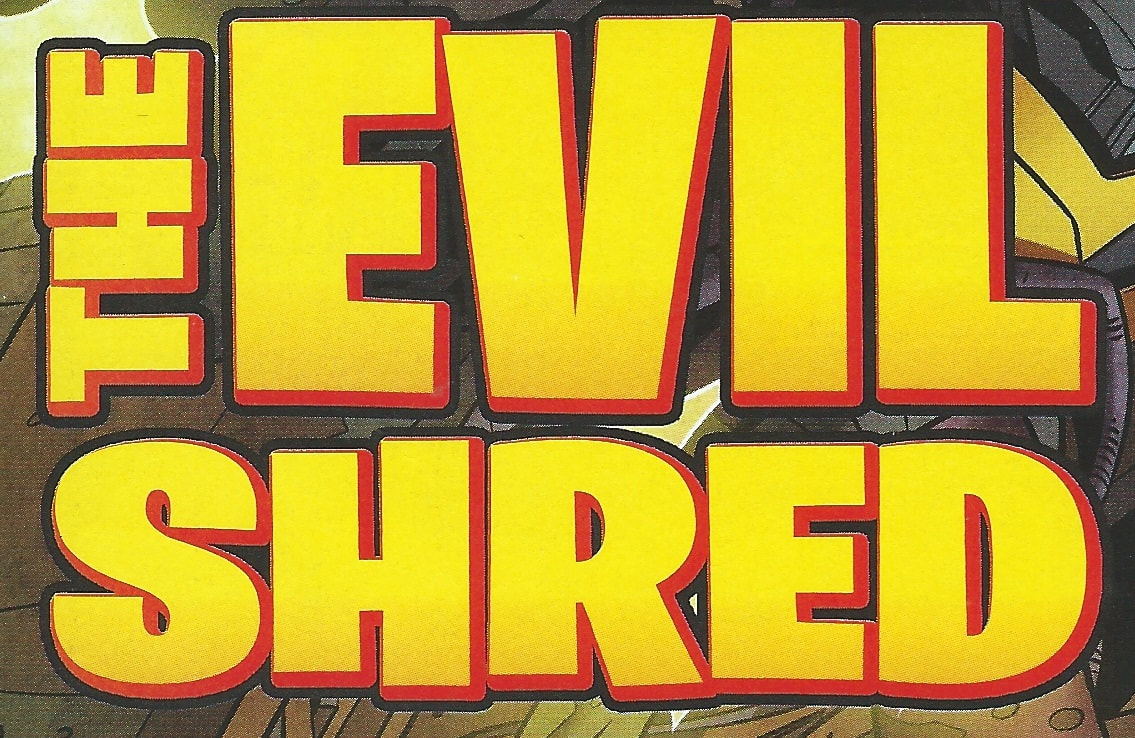 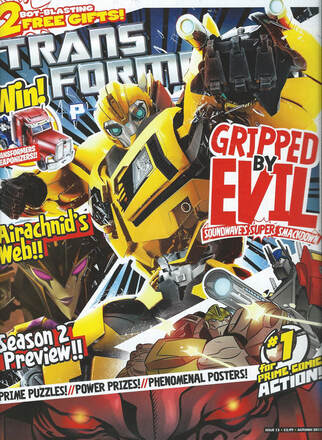 
Stop pointing! That’s not what I meant by taking it in hand!


One thing that has been the case for the last couple of issues but which I hadn’t realised, is that we are now coving comics published during the lifetime of this project. The eleventh of October 2012 being the last day Raiders of the Last Ark! Part 4 was the current entry on the blog. We are rapidly entering the modern era here.

Of course, this was the first issue in four months, an unprecedented gap for a UK Transformers comic, though one that will remain the standard for this title until the build up to the fourth film begins.

Contained within is not the Chris Cooper sea based story promised on the NEXT page of the previous issue, which has been knocked back a few months...err...quarters. Seemingly because someone decided to do a Halloween special for October. Considering this issue will be on sale till January, that might not have been the most sensible idea. Though the fact we open on a big splash page suggests that they might have wanted something with an immediate visual impact after a big gap. 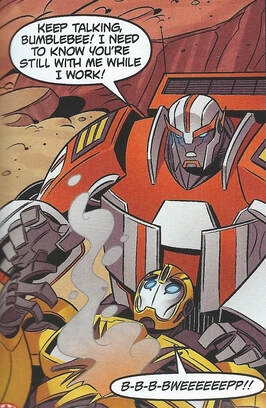 Clap for the NHS.
So The Evil Shred (very tortuous pun there Robin) begins with a flash-forward full page of Raf struggling to pull a disembodied hand (so The Evil Shred 2 would be the more accurate title) from Bumblebee as his first person narration, sweetly written in diary style handwritten lettering by Comicraft, talks about the things that should scare a normal kid. Ghosts, demons, tarantulas. But in 12 and a quarter years he’s already seen a lot of shit go down. But tonight might be where he faces the scariest thing ever...

The narration conceit is so nicely done, it’s a shame it’s mainly there to allow for a scene transition to earlier in the day and only reappears once more in the story as an entire issue like that would have been fun.

That afternoon, the Autobots are battling Vehicons on the Arizona/Utah border, with one particularly outstanding visual of Bulkhead smashing a ‘Con with his mace. Watching is the bored and annoyed Starscream, pissed at Soundwave taking the lead. Or rather “Taking things in hand” as he shoots his fist at a distance deep into Bumblebee.

A power we’ve not seen since Roadhandler back in G1.

Ratchet comes across as not the greatest of doctors. First rather cruelly asking Bumblebee to keep talking as he checks him over (way to be sensitive to the guy’s disability) and then merely dismissing a massive fist as a bit of shrapnel that will need removing later before sending Bumblebee back to base with Raf to rest up. 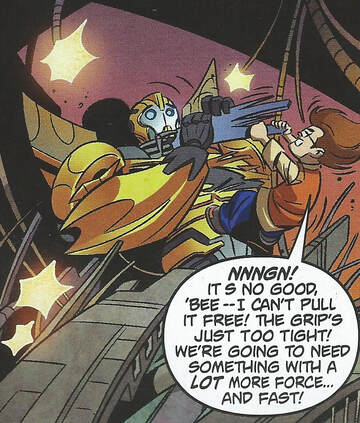 Doctor Who: Rose (2005).
At Omega One (where we get a good clear view of Miko’s Party Kit box), Raf decides to cheer ‘Bee up by putting on the All Monster, All Fright Night, Horror Filled Cartoon Marathon (though the one conceit to the long period on sale is he doesn’t flat out say it’s Halloween), starting with Mummies Have Feelings!! Which quickly sends them to sleep before, as the narration briefly returns, we’re told the real nightmare was just about to begin...

Which brings us back to where we came in, as a surprisingly disbelieving Raf (is it really the strangest thing he’s ever seen? He starts to blame it on the TV playing tricks on him) awakens to find Bumblebee fighting a hand. Which they them comically chase around the base, with it even bringing half the ceiling down on them.

Luckily, and this is why she’s the best character who isn’t Ratchet even when a strip isn’t about her, Miko’s Party Kit contains a ridiculously large firework. Just for kicks apparently. So Raf and Bumblebee quickly tie the hand to The Big Banger, before firing it off into the sky.

Which leaves them having to explain to the returning Autobots (where have they been for hours?) that, no, they weren’t having a party, before Miko is extremely pissed at the loss of the special ridiculously large firework she’d been saving. 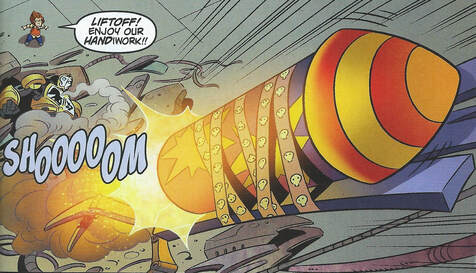 Bumblebee gives the finger.
Which is still a better mood that Starscream and Soundwave are left in, as they have to use a flaming torch to search for the bits and pieces of Soundwave’s missing hand.

Which means they must be right outside Omega One and still not able to find it.

Despite being a strange choice to do a seasonal story for an issue with such a long shelf-life, this is still great fun, fast and breezy and appropriately silly for an Evil Dead 2 homage. It also feels more naturally paced than the previous issue, despite having to give over some of its short runtime to a splash page. The only shame is the narration gimmick being given up on so quickly.

The art is also extremely good, with only the joint credit for Dario Brizuela and Franco Riesco giving away it might have been done in a hurry. Possibly, even with the massive lead-in, Titan might not have decided to do a Halloween story till very late in the day.

Whilst the comic is largely the same as when it was still monthly (I’m actually surprised this wasn’t an oversized cover with extra gifts one), there are a few format changes. Most notably, the episode guide has now been given up on as it would take a decade to get through the rest of the season. 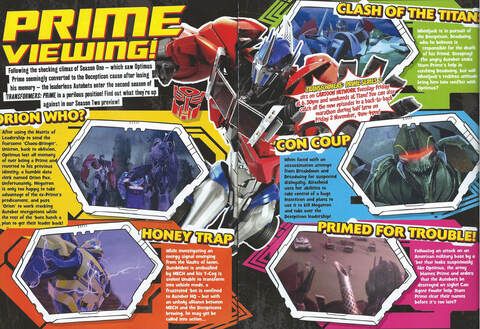 All to look forward to on Cartoon Network.
Instead, Prime Viewing gives us a two page spread teaser for the second season, including the fallout of the season one cliffhanger (where Unicron is called a “Chaos Bringer” in sarcastic air quotes), Wheeljack avenging Seaspray; Airachnid setting a giant Insecticon on Megatron and the Optimus Prime imposter. It’s also careful to tell you exactly when you can see it on Cartoon Network, Tuesday to Friday at 6.30PM, Saturday at 11AM and a full marathon from 9AM to 4PM on the half-term Friday of 2nd November.

Another double spread is given over to telling you to ENJOY THIS HALLOWEEN WITH TOM AND JERRY by buying their Trick or Treats DVD. Which promises “22 chilling cartoons”. Though as I can’t imagine there are 22 spooky Tom and Jerry cartoons, there must be a lot of standard the two whacking each other ones on there as well.

Not the best coordination there.

There is also a competition at the back for Prime Weaponizers toys. I don’t know how Geomag let that one slip through.

Bumblebee’s Brainteasers ties into the comic by asking you to spot the differences between regular and battle damaged pictures of Bumblebee; solve a Raf themed wordsearch and then help the human find his DVD.

After the poster of Ratchet and Bumblebee, there’s an attempt to keep the Halloween theming going with a profile on the “Creepy crawler” Airachnid. 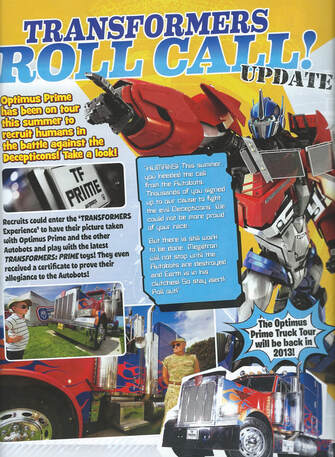 I hope more than one kid did go...
Because “Starscream is unavailable for questioning”, we have Soundwave’s Stumpers. Which is basically business as usual, asking you to recognise four Transformers whose images have been scrambles, put a cut up picture of Optimus back together and unscramble some Raf’s code words. There is an attempt to capture Soundwave’s “voice” (“Challenge: Visual identification”), though the answers are very much still Starscream (“Must do better, meat bucket”).

Transformers Roll Call! Update sums up the tour of the Optimus Prime truck promoted by the last issue. With four months gone, you’d expect there to be lots of great photos of kids meeting Optimus. Instead we get some very obvious taken in advance promotional shots of the truck and NEST solider, with only one child sneaking in. It’s an oddly half arsed effort that only seems to be there to promote the fact the tour will resume in 2013.

On Mega-Mouth, Joseph Myers (Keighly) sends in art and a character profile for his Decepticon OC Buzzkill. Which doesn’t include the character’s only two known weaknesses in case Arcee reads the letter. But if Megatron passes on his personal address, Joseph will send the full profile directly to him.

It’s Oliver Dobson (8, Darlington) who produces the most scary horrifying image of this Halloween, with a multi-coloured Bulk Head wearing a wide vacant eyed grin that makes him look like he’s been self-isolating for a month. 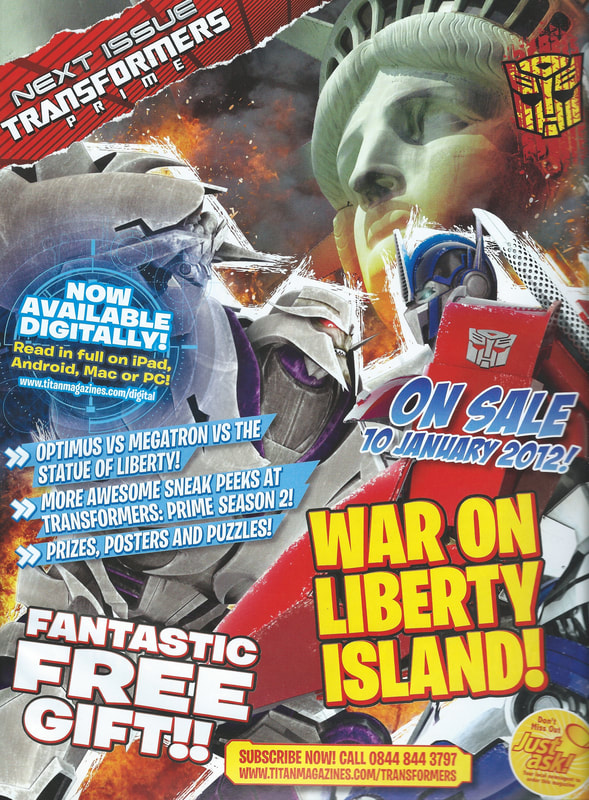