I'm in a New York State of Mind. 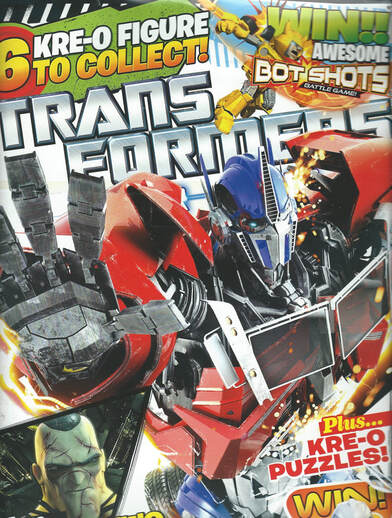 
Far enough? HAHAHA! What a typically small-minded attitude. You should know by now, that it’s never far enough!


*See below for discussion of the release date...


The big thing that stands out this month, and something I’d forgotten about until reading it on the Wiki (for which release dates are going to be far less well covered going forward, so if this happens again I may not be aware of it), is that a comic that we were told was going to be released on the 10th January instead came out on the 31st.

For readers only familiar with American comics, which often can be delayed weeks or even months (I’m looking at you, Transformers Galaxies) this might not seem so odd. But British kids comics run to a much tighter schedule and generally don’t miss the time they come out. I can’t off the top of my head recall this having happened before with Transformers. Certainly nothing has ever come out weeks late.

So... why? The most obvious reason, and usually the case with American comics that have delays, it a problem with getting the strip together. But we’re only two issues away from seeing what Titan will do when they don’t have a comic, and we already know that they’ve got at least one in the bag with the delayed Chris Copper Piranacon story. And frankly, three months should be more than enough time to throw an eight page strip of some sort together, against all the evidence of issue 15 to the contrary. 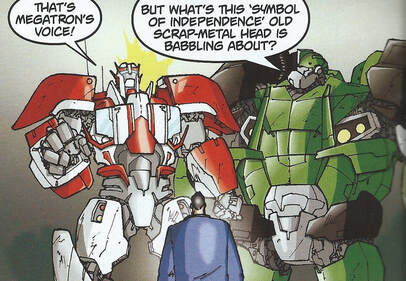 Day 18 of using Zoom to talk to Megatron.
So it feels more probable that the comic really was teetering on cancellation at this point, and some serious discussion was going on behind the scenes about whether it was worth waiting for the fourth film at all. It looks like keeping the licence won out. And you have to keep them credit for keeping the original content going rather than just using IDW stuff.

Or, there was some sort of printing problem at the presses and the delay was as simple as that. Either way, unlike last issue, there is an effort to push the book hard after a long gap off the shelves, with a Kre-O Transformer free gift on the oversized cover. I’ve not mentioned the free gifts for a while because of the difficulty of describing them without having them to hand. Plus, they’re largely the same repainted dart shooters and stickers.

But, whilst this isn’t the first cover-mounted toy the comic has done, it is important to mention for the context of the extras within. So, hold that in mind as I delve into the comic itself...

Which, as mentioned, is oddly not the delayed story we were originally promised for last issue. Which is odd considering this time, it's not a seasonal(ish) strip. If anything, it would be better for the issue out during July. For the lady being protected in Protecting the Lady is none other than the Statue of Liberty. 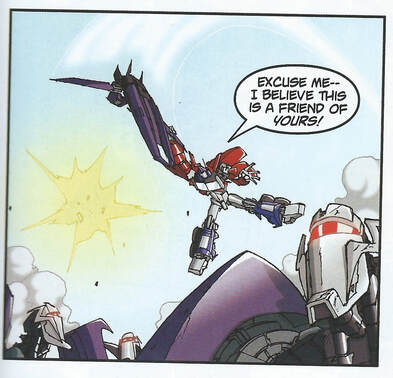 "We're more casual acquaintances"
Megatron has sent out a message across the world: He’s going to destroy the ultimate symbol of independence! Which is unhelpful in narrowing things down and a strange thing to do when he wants an audience, but luckily Fowler has worked out that the first messages sent to the press (turns out Soundwave is a PR guy) went to New York. Making it a good deal more obvious.

For some, not entirely clear, reason only Optimus and Bumblebee are sent to defend the statue, sneaking onto Liberty Island underwater. Where a fun moment of Bumblebee bopping his head and little Autobot symbols dancing around it is undermined by an out of character Optimus having a good laugh at his expense.

Indeed, despite his experience on the book by now, Etherington’s dialogue is ever so slightly off-key in this one for some reason, though that is the most overt example.

With the two Autobots taken out by a sonic mine and brought to Megatron, it turns out the Decepticon is really disappointed there aren’t lots of TV crews there to film him tearing apart the great symbol with his bare hands.

Maybe include a time and location in your next press release Megs.

Prime isn’t having any of this (especially as he’s the other symbol of liberty to be destroyed), so he and Bumblebee stage a fight back, with Prime having a cool moment of smashing one Vehicon into another with a cheery “Excuse me, I believe this is a friend of yours!”. 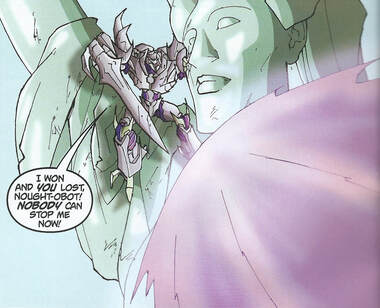 Ghostbusters 2 (1989).
Slightly reluctantly leaving Bumblebee to take on all the remaining Vehicons himself, Prime chases (the clearly forgotten he can fly) Megatron up Lady Liberty, ripping and tearing as they go and with Megatron having a good old rant about breaking the human spirit.

Luckily Bumblebee cuts him short by throwing a Vehicon at him, with Prime then finishing the fight by knocking the torch that Megatron is standing on off the statue and into the surrounding water. Which is apparently enough to make him give up.

Which just leaves the Autobots slightly sheepish about having failed at the “Stealth” part of their mission and keeping the statue from harm. Though Optimus promises to restore it to “Prime” condition.

This definitely feels like a rushed one, with the script not quite there and the art from Jeremy Tiongson very sketchy and half formed. With Megatron in particular having a very strange empty gapping mouth.

Exactly what happened behind the scenes we’re unlikely to know any time soon, but the final result is rather underwhelming despite a couple of good moments during the fight. 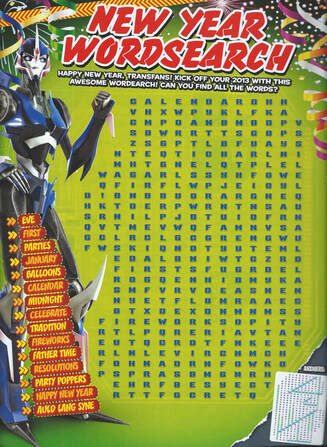 I betcha this was in every January Titan comic with a different character stuck on.
We get another big preview of season 2 episodes, covering Bulkhead’s injury; the arrival of Sideswipe and the finding of the Star Sabre. Not having see season 2 yet (it’s on the very long list of blu rays I need to catch up on), the idea that Silas, once killed and revived as a rotting corpse at the heart of the dead body of Breakdown, changes his name to Cylas tickled me hugely. Presumably he has to spend the entire time writing it down to explain the difference to people.

The New Year Wordsearch would be, if not for a picture of Arcee, entirely unrelated to Transformers, just having you find words like “Eve” and “Party poppers”.

Soundwave’s Stumpers, still with a disconnect between his voice in the text and in the scores, is themed around breaking into the Autobot computer. This means asking to hack into the Autobot database (a maze) whilst getting past Raf’s firewalls (pictures of his face); recognise which Autobot logo is correct on one of several possible alarm buttons; decode the password to the computer (ROLL OUT) and work out the anagrams used on the data files of several different Transformers.

The first of two competitions this month (both using Raf’s code) is once again for the Bot Shot Battle Game, suggesting someone is desperate to shift them.

Instead of a poster, the new year means an excuse to revive the horoscope with a double page Starscream’s Star Signs, largely based around accessing each sign’s suitability for the Decepticons. Mine, for Scorpio, reads “Now this is more like it. Your planet is Pluto, lord of the underworld. Sounds good to me, you’re in, Scorpio!” 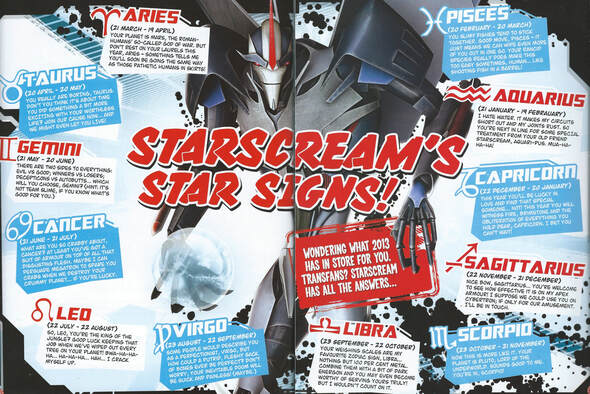 Tag yourself.
I always knew I had potential.


There’s also a double spread given over to Kre-O themed puzzles. Piece together a poster of Optimus Prime that Megatron has torn up (he’s an insecure guy); which is the correct shadow for Starscream and put the piece of a scrambled image back into the correct order.

Another double page puzzle spread, Taking Liberties!, is themed around the comic. Spot the differences between two pictures of Megatron; untangle the different paths to find the right route to the Statue of Liberty (the others lead to a trolley, a shoe and a shark) and decode the Decepticon’s secret battle plan, written in Raf’s code.

Another (they’re spreading out the extras this month) double page spread asks you multiple yes or no questions to find out Are You an Autobot or Decepticon? Depending on your choices over things like “Are you wearing clean underwear?”, you’ll wind up on a sliding scale between Optimus (a “Tireless crusader for justice”) and Megatron (“A diabolical evil mastermind”) via Jack, Fowler and Knock Out.

Mega-Mouth (now giving a Kre-O Transformers Prime Awesome Autobots Activity Book as a prize for each letter) has a lot of Primes this month. First is The Fallen Prime (no relation) by Jack McCready, 8 from Newtownabbey. Who has a complicated story about being found and released in order to try and replace Ironhide after Dark of the Moon, but the important thing is his real name is Iron Gnasher. Owned by Iron Dennis the Menace.

Meanwhile, Maximum Crash Prime by Jack Mason (7 from Weston-Super-Mare) is a SUPER-Autobot that has special pipes to pump Energon directly into him.

The second competition is for various Kre-O building sets. With the theming of the issue carrying over to the oversized cover, which has a cut out Battle Bunker, which cleverly is either a ‘Bot or ‘Con one depending on which way you fold it. Meaning it can house whichever of the free figures you got stuck on the cover.

But, as Kre-O Optimus reminds you, always ask for an adult for help using scissors.

Next week, let the games begin. 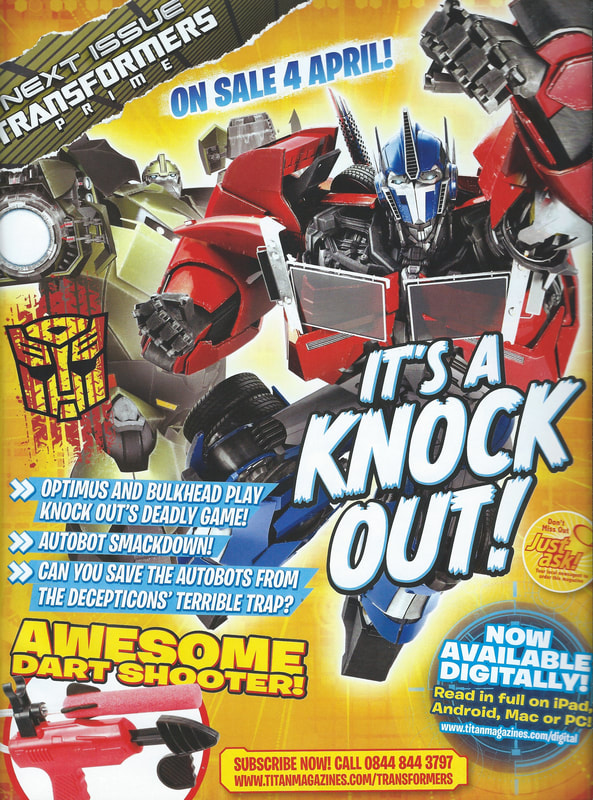