It's Only a Game, So Put Up a Real Good Fight. I'm Gonna Be Snookering You Tonight. 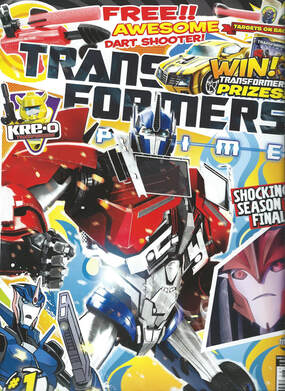 
Oh, very well. You can push the button that probably kills the Autobots.


First off, a shout-out to Sam Palmer, aka XHARDCOREGAMERX on Twitter, who, unbeknownst to me was the colourist on the previous issue and a follower of mine. They’re obviously still very proud of having gotten to work on an official Transformers comic and are a pretty decent sort who is worth a follow on there.

A less likely shout-out comes this issue in the form of the lead comic being named after the long running but by 2013 long obsolete British kids game show. Whilst it’s an obvious source for a gag about Knock Out running a game show, it was also back in the news the previous Christmas due to presenter Stuart Hall turning out to be another British Children’s’ TV personality who was a prolific paedophile.

Whilst I would hope Etherington didn’t hear that news and have his first thought be “Hey, “Knock Out”, that gives me an idea!”, it likely subconsciously meant it was more to the forefront of his mind than it otherwise would have been. And means it joins Jim’ll Fix It as nonce fronted shows name-checked in a British Transformers comic. 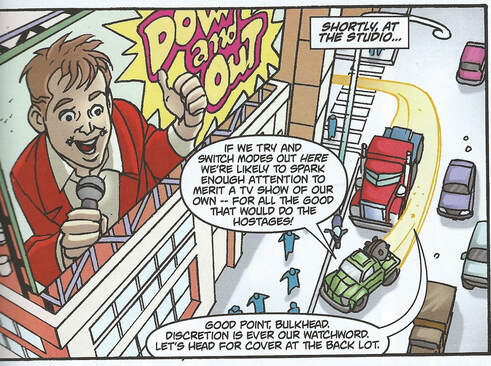 Imagine a Transformers TV show. Crazy.
Inside, we open with an Indiana Jones dressed man crossing a rope bridge, only to get knocked off it by a log... at which point it turns out to simply be part of a TV show, hosted by Chuck Chuckles (who doesn’t seem to be specifically based on anyone).

The setup for Down and Out is of course based on The Crystal Maze, which was at least closer to 2013 than It’s a Knockout, and has the advantage of being a UK family show without any child molestation associated with it. An almost impossible find.

It initially looks like Chuckles is going to be our main guest star, the loud and brash American TV host, a cliché to be milked. But he almost immediately leaves the story (bar a few panels as a hostage) as the lights go out in the studio and the show is taken over by a very cheerful Knock Out.

Cut to Prime, Bulkhead and Arcee driving in after Fowler has reported the take-over and that Prime and Bulkhead have specifically been called in to negotiate.

Creating an unintentionally funny moment as Prime agrees this is clearly a trap and that’s why he’s brought Arcee as well. Presumably to chuck into the danger first.

At the studio we get the first of a few meta gags as Bulkhead points out they have to be careful who sees them in robot mode as they’ll wind up with their own TV show. Arcee then splits off to provide backup, with the two negotiators walking in with the intent of using surprise on their side. 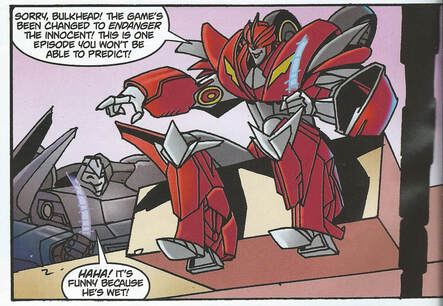 Breakdown loves the opening of Star Trek Generations.
Something immediately lost as Bulkhead is spooked by a teddy bear and destroys it with extreme prejudice. Rather giving them away to the waiting Knock Out and (still pissed due to events in the cartoon with Bulkhead. Etherington confirmed on his blog this is set before he died in the series) Breakdown.

Using Chuck and the studio audience as hostages, the two Decepticons fiendish plan is to...

Which is hilarious. And it’s quickly very clear here that, for all the talk of impressing Megatron and usurping Starscream, this is just date night for the two cons and they’re not really out for more than mild humiliation.

Something made obvious when the Autobots attempt the rope bridge from the opening. Bulkhead is initially smug about knowing how this works from having seem the show with Miko, before it turns out the traps and have been reworked and the (hopefully replaced by something with more heft since the opening, it’d be awful if the real game was using actual logs capable of knocking robots off their feet) log sends him into the lake.

Which reduces the watchers to fits of laughter, with Breakdown being especially delighted, “HAHA! It’s funny because he’s wet!” 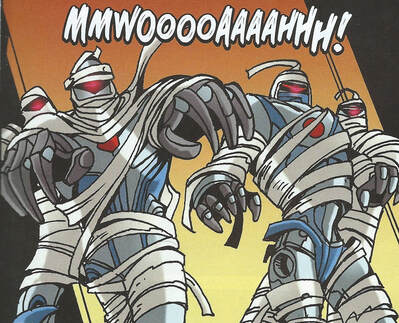 mum's the word.
This is followed by another meta moment of Prime pointing out the sort of inaccuracy you get in TV sets, as the Aztec themed zone (just like The Crystal Maze) is covered in Egyptian hieroglyphics.

Meanwhile, the almost orgasmic Breakdown is allowed by Knock Out to press the button that will “Probably” kill the Autobots. Which turns out to just knock the Styrofoam props on top of them.

Seriously, this is the most adorable Decepticon plot ever.

Next up are some mummies, with the nice twist being it’s Bulkhead who is smart enough to spot they’re thinly disguised Vehicons rather than props (“It’s more the visible Decepticon symbols and barely disguised blasters that have me spooked!”).

As Bulkhead does what he does best, Prime manages to rescue the suspended over a pit of spikes hostages, but the ever cheerful Knock Out is just happy to get to pressing the blow up the building button. Which is when Arcee swoops in to save the day. Oddly ending the issue with the two bad boys captured. Perhaps they were let go for just being scamps rather than villains? 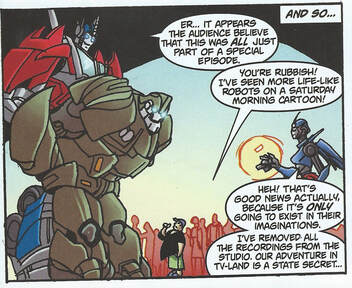 Though Transformers was famously a weekday show...
Following another meta gag of the audience believing they’ve just taken part in a special episode of the show because “I’ve seen more life-like robots on a Saturday morning cartoon”), Arcee erases all the tapes. Which seems a bit of a mean thing to do to Knock Out and Breakdown’s honeymoon video.

But one copy survives, and winds up in the hands of the kids, who piss themselves laughing as much as the Decepticons did. Raf even repeats Breakdown’s “It’s funny because he’s wet” line. Suggesting future sociopathic tendencies.

That was much more like it, Etherington is on top form here, having a great time putting some ridiculous fun into the series. Tellingly, unlike the last issue, it feels like the dialogue went through more than one draft this time and everything sings. Knock Out and Breakdown are especially a highlight, and Horacio Domingues does some lovely art. 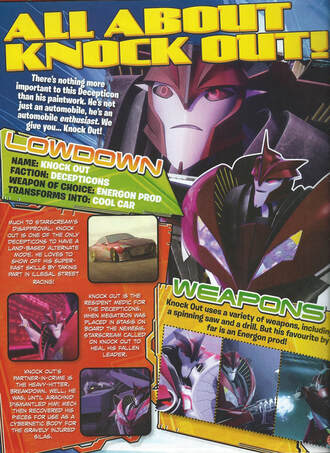 Thinking about Him.
Behind another larger cover with cut out targets to use the free gift on, Prime Time promotes the final part of season 2, though much more vaguely this time so as to try not to spoil any surprises. As it says, “If we said any more, we’d have to kill you (not really).

The competition this issue is for the Prime Dangerous Ground DVD and some toys of Megatron and Prime, again using Raf’s code.

Kre-O Transformers Conundrums is a double spread of posers. Asking you to identify Transformer body parts scrambled by a sonic mine; spot the difference between two security camera pictures; help Bumblebee chase Starscream through a maze and play Sudoku with Kre-O brick pieces.

Unexpectedly, the Ultimate Smackdown returns, to give us Starscream Vs Soundwave. Which comes down firmly in favour of Soundwave, ending with a rather bitchy “If Starscream really is as clever as he thinks he is, how come he hasn’t overthrown Megatron yet?”.

That extra feature is presumably why Soundwave’s Stumpers is just a page this time around. It wants you to identify the robots hidden in Batman style KAPPOWW exclamations and to decipher an intercepted message from Agent Fowler in Raf code.

Past a fun Prime Time poster of the Autobots, we get All About Knock Out!, a quick summation of the character (that, unlike the lead strip knows Breakdown is dead), with two pictures of the Decepticon so positioned as to make it look like he’s thinking wistfully about himself. 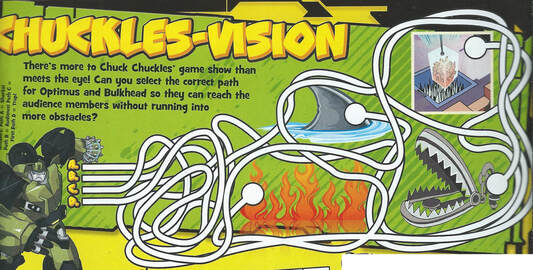 From me, to you.
Down and Out! sees Chuck Chuckles introduce various games based around the strip. Spot which of four Prime’s is the real one; then assist the Autobot put a Aztec prop back together; help Bulkhead pick the right path to the hostages before finding out how many times the name “Arcee” appears in a wordsearch.

Trans Files tells you everything you need to know about the Nemesis, before posing some true or false questions. Helpful hint, it is not a deep shade of red.

Mega-Mouth remains the domain of the OC, with Silverwolf by Emma Nixon (21, Co. Durham) getting special attention for being an attempted clone of Arcee and Starscream. Which worries Arcee as she didn’t give consent.

The most worrying thing though, is the next issue page. Which promises a POSTER SPECIAL. Yes, even at this point, with four months notice, they already know they’re not going to have a comic for issue 15. We’re about to hit one of the most infamous moments in Transformers comic history. 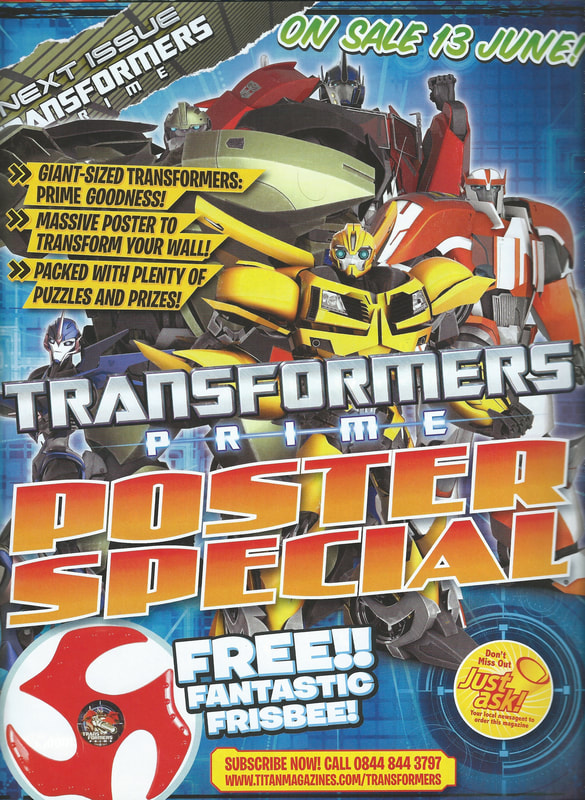