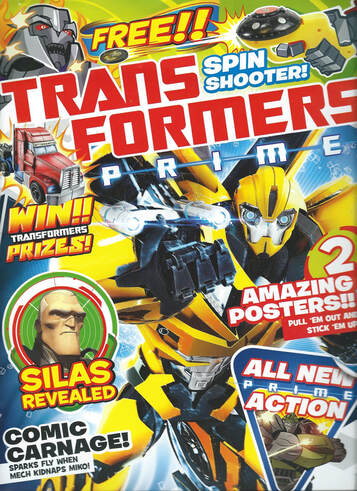 
SILAS REVEALED screams the cover, promising the villain will be whipping out his MECH and two veg. Which must be impressive as they’ve had to hide it behind another larger cover than usual.

Chris Cooper not only takes on his second issue in a row, and goes one better by making it a sequel to his first. Yes, for the first time since the Revenge of the Fallen volume, we’re getting a part 2, even if in a loose “If the comic had been canned last month you wouldn’t have felt like you missed anything” sense.

The Nova Incident is a MECH story, but though Silas features, it’s about the new character of Agent Novo. Whom you know is called Agent Novo because when he calls the MECH base, the words “AGENT NOVO” appear twice. And he’s fastidiously called “Agent Novo” every time as a bit of not too subtle set-up.

Agent Novo starts off with a cool Snake Eyes style mask, but quickly removes it in shock when he sees what he’s come to China chasing signs of Cybertronians to find. Advanced technology in the shape of the Neuron Refractor! Which somehow he is able to work out is a mind-swap device. But that’s the sort of top draw deduction you get from Agent Novo.

The unseen Agent Novo.
Agent Noro’s day gets even better when Bumblebee and Bulkhead come through a Ground Bridge to collect it before it falls into the wrong hands.

Cooper then has a problem, with only 8 pages, how can he deftly show that unseen, Agent Novo has stowed away inside the Decepticon weapon without the need to show it and waste space?

By, once we’re back at Omega One and we see him sulking in the shadows, having the caption “Unseen, Agent Novo has stowed away inside the Decepticon weapon”. Though to be fair, I suspect the script hoped the reader would connect the dots and the narration was an editorial addition.

Agent Novo is exited to be in the ‘Bot base, but equally annoyed he can’t get a call out to summon a MECH airstrike. So Agent Novo goes for plan B when he sees Miko: Grabs a hostage and demands to be Ground Bridged back to China with the mind-swapper. With some extra grenades thrown in as he leaves to prevent anyone following him quickly. 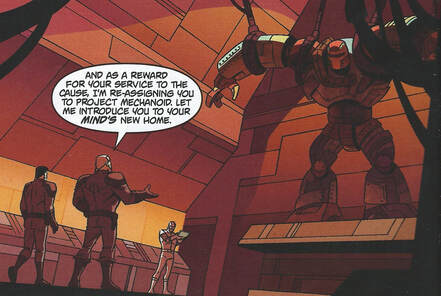 Centurion Mark III.
Having been picked up by MECH and taken back to headquarters, the page count again means a bit of cheating, if not as overt as covering action with a caption. It turns out that, by amazing coincidence, MECH have been working on their own mind-swap human/robot plan and this new gizmo will finally help them complete Project Chimera and put Agent Novo’s mind in the body great big Iron Man after the middle aged spread set in robot Agent Novo!

Things might have been a bit more organic if they’d started working on the robot after getting the machine, with some sense of time passing. And of course, for older readers we’re very obviously getting into Centurion territory.

Now, Silas wants the Autobots to come find Miko so he can set MECH’s new toy on them. But oddly how the Autobots track her—her mobile is still logged into the base wi-fi and downloading music basically—doesn’t seem to have been a deliberate set up by him. I guess he just assumed they’re that good.

Mind, Silas clearly isn’t a very good judge of character as, when trying to place Agent Novo’s mind in Robot Agent Novo’s body, the machine starts to overload and Silas is told they’re in danger of losing Agent Novo. To which his response is “I don’t care”. 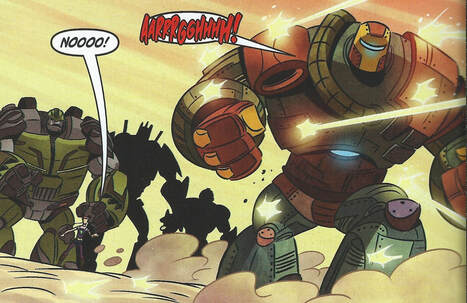 Who is incredibly pissed as he breaks out of the Robot Agent Novo holding clamps and goes to break Miko out of her cell. He has realised the error of his ways and will be Agent Novo no more... now he is just Novo!

Which gives us our slightly rushed climax as Age... ahem... Novo runs outside, hands Miko to the confused Autobots but refuses to come to Ratchet for help. Instead he tells them to escape, and he takes on the Mech forces (with Silas ordering MAXIMUM FIREPOWER like he thinks he’s Servalan) and explodes the base.

At Omega Point, where Prime calls Novo a “Guy”, a word I cannot imagine Peter Cullen ever saying, they look at the devastation via satellite, with Bulkhead offering unconvincing reassurance that Novo could have survived...

...before we cut to the reveal that he did! Setting up a return appearance. But, fittingly for a character with a degree of Professor Morris in him, he and his vendetta against the people who trapped him in his giant robot body will never be seen again.

This almost works, but would have been much better as a full on two part story. Not only are the plot beats rushed, but we don’t get any time to really care about Agent Novo (despite the repetition of “Agent Novo” being quite hypnotic) before we’re suddenly supposed to be rooting for him. 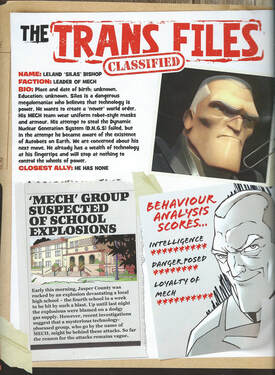 Silas revealed.
Miko as a hostage also feels like an entire issue of her comically annoying MECH till they’re desperate for her to be rescued that’s been wasted on a couple of panels here.

It’s still fun though, and as with the last issue it feels a bit weightier than we’re used to. With the nice art from Dario Brizuela, this is a sold B, but feels like it’s just a few extra pages from being a lot stronger.

What Silas has to reveal is his backstory, as The Trans Files Classified is a two page spread covering his history in the cartoon and comic to date. As a sign that some thought has been put into coordinating the contents of the comic, the episode guide hits Convoy, the first appearance of Silas in the show (it also awards Bumblebee the prize for “Looking cute even when he’s fighting”).

The Prime juggernaut is gathering pace in the UK, as we get a full page advert for various tie-in books, 3D Bots Vs Cons; Megatron Returns; Optimus Under Threat and the Official Handbook.

Starscream’s Stumpers asks you to spot which one of five Bumblebees is the fake; recognise close up shots of five Transformers and to use Raf’s code to find out what Starscream’s message to Megatron is (“You are not the boss of me”).

Ratchet not only gets to be one side of the poster (the other being Soundwave), the joke page is back. With the promise that you’ll get your money back if you don’t split your sides. Luckily they add a “Ummm... not really” as puns like “I keep thinking I’m a frog/Don’t worry, I don’t think you’re going to croak” mean I’d be going down Titan for a refund. 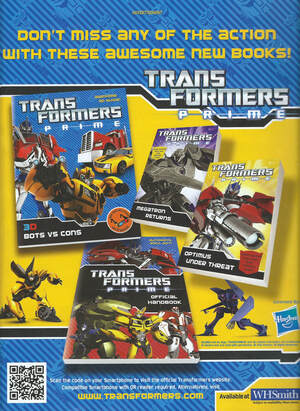 Prime reading.
Dark Energon Hunt! is a fairly generic puzzle where you have to help Optimus find the power source in the Amazon jungle.

As does a letter from “fan since 2002” Sam Bullock (13, Hawkshurst) who firmly thinks Megatron should have won in Dark of the Moon as Prime is a brutal face ripping city threatening monster in the film. He also sends in some of the photo-comics he’s made with his toy collection, showing fan creativity starts early.

Which is a mood.

The Weaponry Wordsearch asks you to find various explosive terms such as “Dynamite”.

The big cover is for more cut out targets (Megatron, Starscream, Soundwave and a Vehicon), to use the free gift shooter on. The various scores on each target makes it look like Starscream’s ass is worth 20 points.

The next issue page features a large sticker that almost seems to beg “Don’t miss out JUST ASK! Your local newsagent to order this magazine”, which may be a sign of why the comic is going quarterly soon.

But before that, next week, Jack is back... 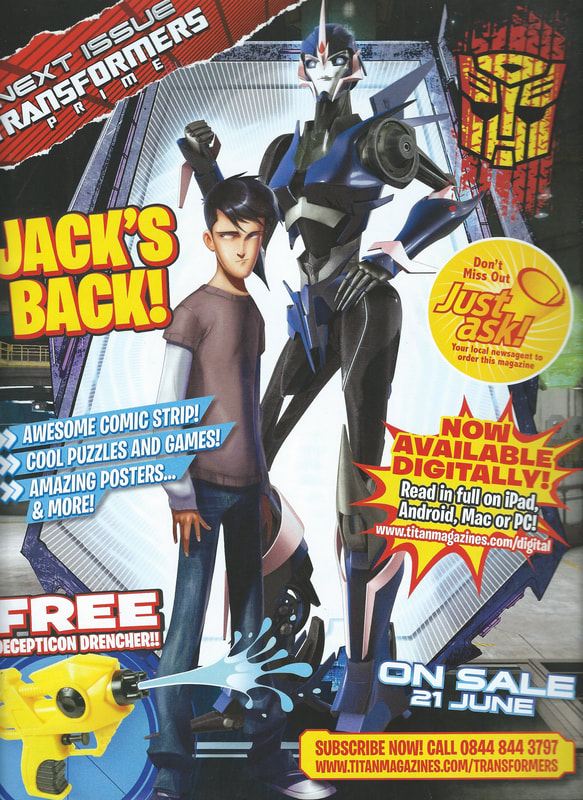