The Memories You Gave to Me. 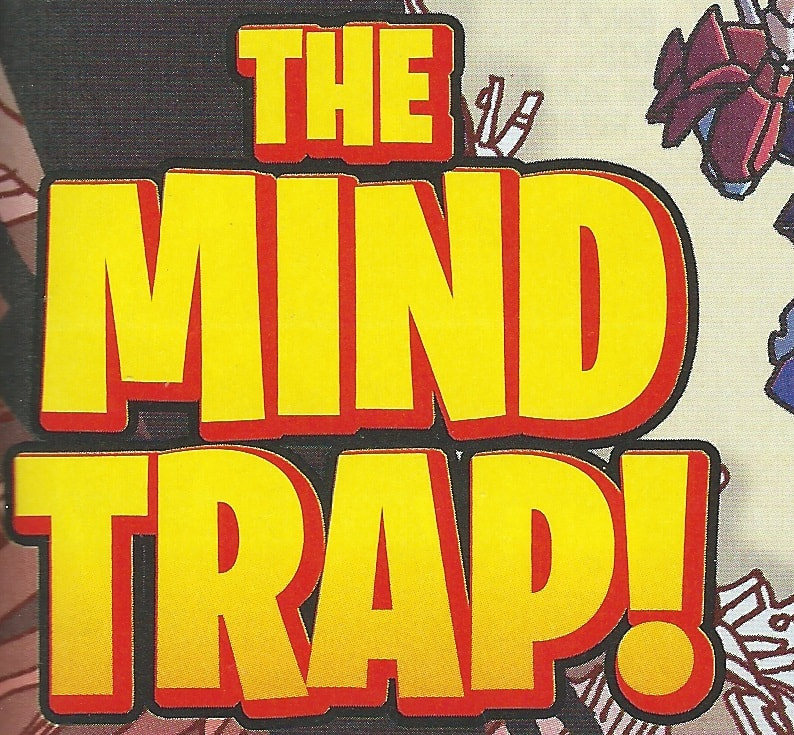 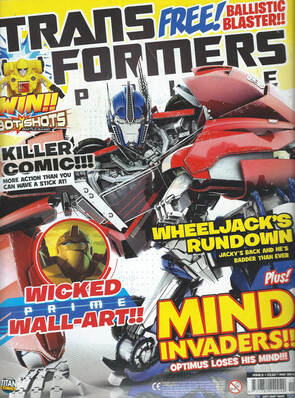 
I never realised recycling could be so much fun!


The cover promises us a “Killer comic” this month, which is a worry with all the other recent health scares doing the rounds.

Which isn’t to say he’s not a successful writer in his own right, with various comics and some Big Finish work to his name. He also immediately strikes his mark on the book with a story that’s a little different from what we’re used to by this point.

The story is set in Zhejiang Province China. Though it could basically be Basingstoke for all the actual difference it makes to the story and characters. Which actually makes it feel more authentic than any potential forced attempt to make it “Chinese” would. 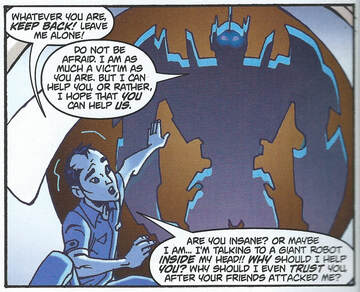 And people think Bay Prime was too scary.
Prime is in a junk yard investigating an energon reading, that turns out to be a trap set by breakout star of the cartoon making his first appearance in the comic, Knock Out!

Using a Neuron Refractor and a captured junk yard worker we find out is called Lin-Chi, he zaps Prime and transfers the Autobots mind into the human’s body.

Cooper has really done his homework as well, with Knock Out being his usual delightfully camp vain self throughout (“Look who’s come to play!”), and thus hugely entertaining as a result.

It’s the inner struggle rather than the outer one that makes the issue interesting though. As Prime’s body is moved to a car crusher, we see Prime, unable to even move the human body by himself, attempt to mentally contact his host. All played out, in a neat stylistic choice, via reflections in the eye. So we see Lin-Chi cowering in fear before the giant scary robot, before he slowly comes to realise this isn’t his actual enemy, via a mind meld that sees him learn all about “Orion Pax” and the true evil of the Decepticons. 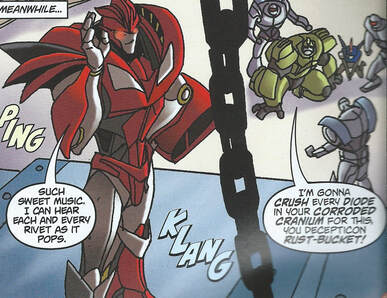 Looking this good is hard.
It’s a truly outstanding sequence, made even more so by the fact we’ve not had anything like this in the Titan comic before. Indeed, the last time we came to anything close was probably the Megatron/Straxus duels way back when in Marvel.

With Prime-Che now able to move, the rest of the issue becomes a more conventional, but fun, action scene.

The human, knowing the junk-yard, is able to take their shared body to a crane (“They call her The Claw. I call her Daisy”), which he uses to smash the Vehicons Knock Out sends after them. Meanwhile, Arcee and Bulkhead have arrived, taking the fight to the main Decepticon, who is just delighted to be doing his bit for recycling by crushing Prime.

Prime-Che makes his way back to the Neuron Refractor, but at this scale can’t both press the on button and get in the path of the beam without jumping from what would be a lethal height for the human body. But Lin-Chi would rather that than carry on like this, and so with a “Make sure my kids are OK” to his other half, takes the leap. 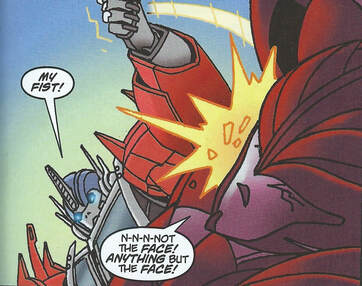 All good writers know your A and B plots should meet with a impact at the end of the story.
Just as Knock Out seems to succeed in crushing Prime’s body. But, in a very Superman III moment, Prime bursts out and points out to the Decepticon he has something on his chin... Prime’s fist.

Always a kidder that Prime.

We then end on a sweet note as, after he had inexplicably not been killed in the fall, Lin-Chi is taken home to his kids, with a special understanding now existing between him and Prime.

This may be the best Prime issue yet, feeling more packed than 8 pages thanks to its two different feeling plots running in tandem, with the mind conversation being a real highlight.

The art from Horacio Domingues is more hit and miss. The issue splits the comic into two halves divided by the bonus features, and the second four pages feel a lot more rushed and slapdash than the first. As if he’d (understandably) put his focus into the different feeling mental landscape and didn’t have as much time to spend on the rest of the story. But that’s not enough to dampen a very strong story. 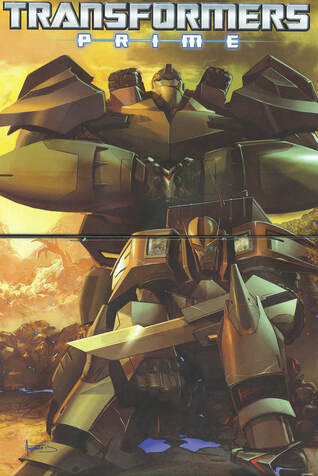 Buff boys.
The aforementioned bonus features give us a new Autobot, the profile covering Wheeljack (including a spot the difference between two pictures of him that oddly doesn’t pass one off as Makeshift) and the episode guide his first appearance in Con Job.

The double spread Epic Transformers Prime Quiz has 21 multiple choice tests of your knowledge of the show, including stuff like “Who is June Darby?”.

Rather than stock CGI, the poster is actually some IDW art of Ratchet and Bulkhead by Augusto Barranco from their first Prime issue. Though the spilt blood from the killed Vehicons has been muted in colour compared to the version on his site.

The Mind Trap...Maze! is a game running around the brain of Lin-Chi.

Starscream’s Stumpers! asks you to uncross Ratchet’s wires; spot the differences between two pictures of Bumblebee and to use Raf’s code to unscramble the Seeker’s secret message. The same code being used for a competition for Bot Shots toys.

Mega-Mouth has a variety of impressive art this month. Including the t-rex “Deceptisaurs” from Lexi Farrell (10, Co. Kildare) that inspires a “What do you call a dinosaur mechanic? Jurassic Sparks” joke from Arcee. 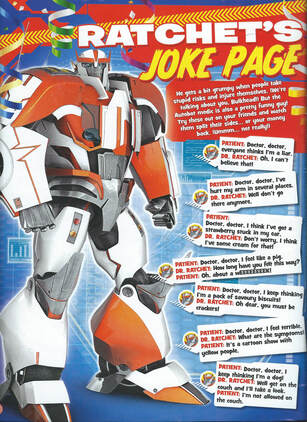 "Doctor Doctor, I keep repeating myself" "you can say that again".
Casey Millington from London sends in his fan character, Raximus Prime, who Arcee describes as “Tall thin and totally mechanic. Just the way I like ‘em!”, if anyone wants to know her type.

Johan Piest, clearly an older reader as his art is a montage of G1 characters, also includes a letter where he wants to be Megatron’s loyal servant. The kinky sod.

Ratchet’s Joke Page is not just a similar thing to the one from Dark of the Moon issue 2 less than a year ago, it even repeats one of the same jokes (“I think I’m a strawberry...”). suggesting originality is running thin on the ground.

Luckily I still have plenty of originality left, so join me next week as Bumblebee gets busy! 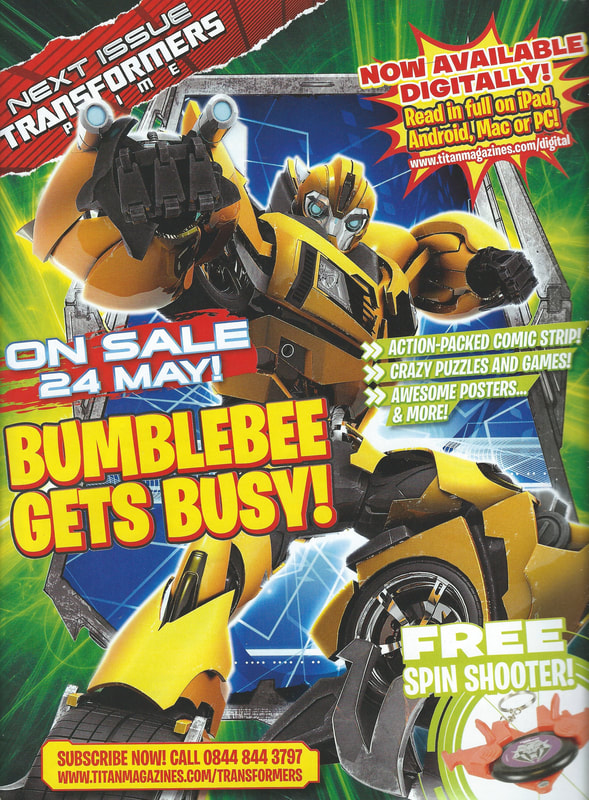