I Fought the Law, the Law Won. 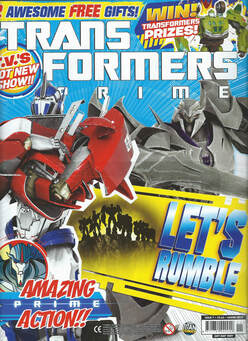 
Maybe I should simply sit here and take my punishment...


The cover this month (thankfully normal sized, so my scanning is merely inadequate rather than appalling) has Megatron staged perfectly behind Prime for a “He’s behind me isn’t he?” joke. But instead the tag-line screams “LET’S RUMBLE”, which is a lie as Rumble isn’t in it.

Another lie is the presence of Prime himself, Megatron’s Law is an all Decepticons affair. It also shows Etherington has some solid familiarity with the Aligned continuity as it makes use of Megatron’s gladiator background. He’s also clearly keen to, as much as a more kid aimed comic can, look at the Megatron and Starscream relationship.

Though we also get a hint of how Megatron views Prime, as he’s once again incredibly pissed with Starscream that the Autobots are walking about footloose and fancy-free. Something he puts down to the Autobots simply being better. 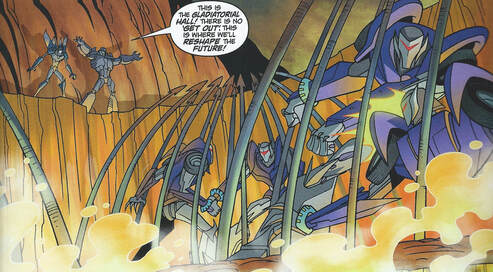 Are you a gladiator?
Boy do you have some insecurities there Megatron. And there may not be any better metaphor for his feelings about Optimus than an erupting volcano. Which is exactly where he’s brought Starscream (“Deep in the Danakil desert” and known to the locals as “The gateway to hell”), the interior of which holds the Gladiatorial Hall.

The idea being simple, all Decepticons (though we only see Vehicons apart from Starscream) will prove themselves by fighting a compatriot to the death. Which actually horrifies Starscream, which is a pretty interesting character beat for him. 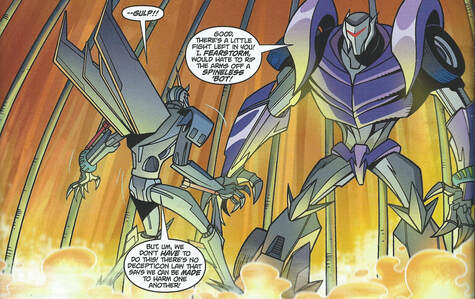 When Starscream is the voice of reason, you're in trouble.
Not that he has much choice when he’s thrown into a cage and told to fight the massive Vehicon Fearstorm. Who is quite looking forward to ripping off the arms of a famously spineless ‘bot.

Starscream, again, actually gets to be the unexpected voice of reason, pointing out this whole thing is ridiculous and there’s no law saying they have to fight. Though his leader points out this is Megatron’s Law.. oh, and the shackle that’s been put on Starscream will explode in ten minutes unless he finds the key... his opponent’s spark.

One shame in what follows is we’re quickly told the volcano’s magnetic field stops them transforming, as vehicle mode using fights are always more fun. But we do get some good bouncing about and quipping from Starscream, as he breaks off a sharp bar from the cell and (after talking about how he wants to take his punishment. Kinky sod) killing Fearstorm and unlocking the bomb. 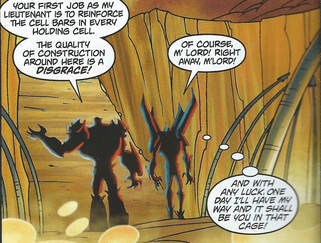 Those two guys.
However, in an odd moment from an otherwise fine issue of art Dario Brizuela, it seems that whilst Vehicons are fair game to actually kill, this still has to be shown carefully. So Fearstorm is taken out by being stabbed in the one hand, them immediately stops fighting so that he can be killed and his spark removed between panels.

This still impresses Megatron though, who simply says it was not a bad effort... and gives Starscream his first new order... of making the cell bars stronger. But all Starscream can think of his how he can’t wait to put Megatron in a cage.

As an attempt at a more serious story, this is much smoother and more consistent than the use of violence in schools two issue ago, with Starscream’s incredulity at the idea of trial by combat a welcome bit of lamp-shading of a very old story. The characterisation of the two main leads is all on point and nicely dark, whilst even Fearstorm gets to make a solid impression. 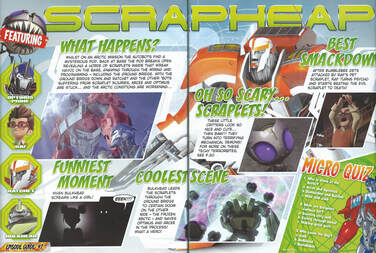 Finally an example of the episode guide.
There may be no Autobots in the comic, but they get a strong showing in the rest of the issue. Starting with the return of the Ultimate Smackdown from the movie era... but in a twist, setting Autobots against each other as Bulkhead takes on Arcee.

Which seems unfair as they’ve only just managed to become good friends thanks to the magic of Christmas.

The episode guide cover the Scraplet resurrecting Scrapheap, with a lot of the remaining extras divided between focusing on the comic this episode.

In the former category, you have Megatron’s Law—Gladiator Game! Which takes three pages. One to explain the rules the game, and then a two page spread (in place of the traditional poster, which is another one page affair this month and of Megatron) of the cut out playing cards. For characters (Optimus Prime; Megatron; Starscream and Bulkhead) and various power moves like “Killer crunch” and...err... “Kunk-Fu Kick” that have different effects on the health level you start with.

It all looks a bit exhausting to me.

There’s also a Megatron themed wordsearch that requires much less energy and brainpower. 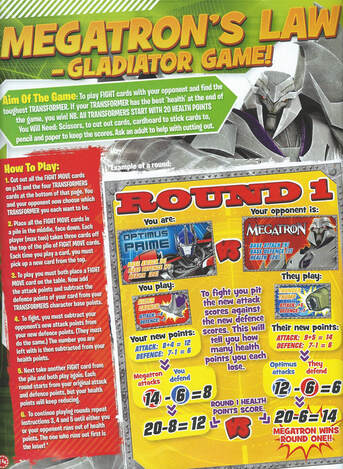 And that's just the rules.
On the episode side of things, The Terror of Scraplets! tells you their history and abilities, including the idea from Marvel that they combine. Scraplets Attack... Maze! is a maze you have to get through whilst avoiding attacking Scraplets.

Amidst the theming you have a Raf’s code using compition for Cyberverse figures. Whilst Starscream’s Stumpers wants you to recognise various arm weapons; spot the difference between two pictures of Megatron and use Raf’s code to find out his personal message for his leader (“Your face = Prime’s butt”).

Mega-Mouth has Ben, 11 from Basingstoke, send in his Autobot OC Blade Fire in, along with some questions that conclude with asking why Megatron is so horrid. To which he replies he prefers “Diabolical”.

But don’t we all?

Next week, back to the Autobots as Optimus faces... THE MIND TRAP. 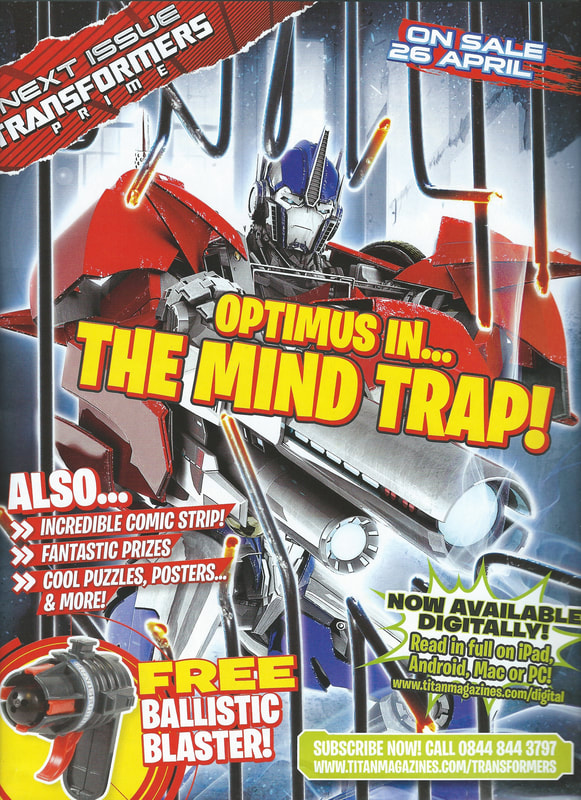