Hail to the Chief. 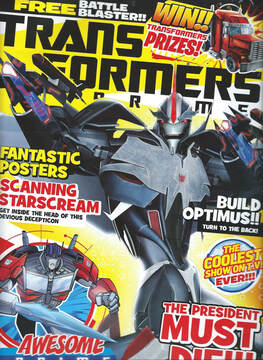 
I’d leave your men to fight their own battle if I were you Starscream! You’re about to have your hands full!


THE PRESIDENT MUST DIE!!! screams the (again over sized, again too big for my scanner) cover. A terrifying threat in 2012, something to look forward to in 2020.

(Though if the CIA are reading this, I don’t mean that president but the president of... Latvia)

Now, obviously if you’re doing a comic about the Decepticons attacking Air Force One, the classic film you name it after in a punning way is... All the Presidents Men.

Mind, my Twitter pal Rhi Danel Olivaw still avoided the obvious film (Air Force One if you’re struggling) and managed to come up with a corker in Decepticon Air. 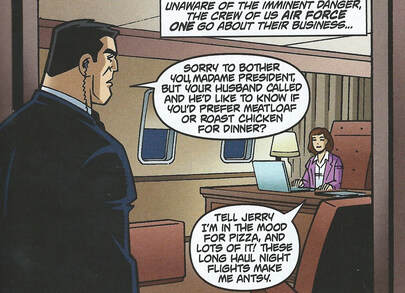 Better than what we got after Obama really.
We open on a different kind of flagship and a different kind of Force, as aboard the Nemesis Megatron is berating Starscream for being completely useless, with some sick burns (“But what have I done?” “Absolutely nothing, as far as I can tell!”), with the issue eventually boiling down to the fact that Megatron is unimpressed that Starscream hasn’t forced the Autobots out into the open to be killed yet.

Luckily, the annoyed but still subservient Starscream (“He’s not the boss of me! Well, okay, he is the boss of me...”) already has a plan. Steal Air Force One!

Aboard which, the President is revealed to be a (Spock in The Cage voice) WOMAN.

This is very much a snapshot of pop culture of the time. A decade earlier, 24 hadn’t been the first show to feature a black President, but the fact it got a lot of credit for “Paving the way” for Obama, coupled with the fact that it was fairly obvious Hilary Clinton was going to try and succeed him had one net result: Women Presidents. Everywhere. Including in 24 as it got through Commanders in Chief at a rate of knots (David Palmer turning out to be a compromised disappointment before being succeeded by a right wing madman means we probably shouldn’t be so grateful it paved the way). 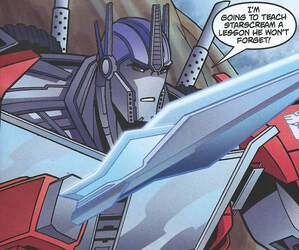 The spanking of his life is coming.
IDW got in on the game as well, going one better by giving us a black woman President. All these efforts now, unfortunately, seem absolutely hilarious in retrospect.

Etherington also goes a bit Furman in how he writes her introductory scene, as he has to field a call from her husband, asking what he should cook for dinner. Because the husband cooking is funny.

I’m no expert, but I’m going to guess the First Lady doesn’t cook many meals, let alone meatloaf (which shows it’s a British author, that’s one of the American foods we know about). Though at least she gets some credibility as a leader by preferring pizza.

Sensibly the comic doesn’t try to invite comparison with the Air Force One attack in the 2007 film, just having Starscream gassing everyone aboard (and sportingly not killing everyone but his key hostage) before running off with the plane. 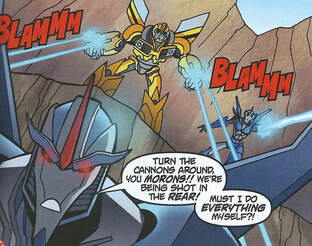 Nothing worse than being BLAMMMed from behind.
The rest of the issue is then basically given over to filth and innuendo. Starting innocently enough with Ratchet asking a grumpy Fowler if he’s ever considered a “Refresher course in inter-species relations”. We’ve all used that line.

Fowler reveals that Starscream has sent a message demanding Prime give himself up for the President, but for some reason choosing to make the directions Prime needs to follow cryptic, saying at the place “where the old warriors fell twice”.

Which turns out to be a bit of CONTINUITY as this means the Grand Canyon, with a * informing us this refers to the opening episodes of the cartoon.

Then as a bit battle with a three-pronged attack from the Autobots, we get “I’m going to teach Starscream a lesson he won’t forget”; “We’re being shot in the rear!” and the above quoted “You’re about to have your hands full”.

But what about her emails?
Which is the point I decided Etherington was doing this deliberately. And it at least livens things up till Prime simply cuts of Starscream’s president holding hand and rescues her, whilst the Decepticon flees with a promise he won’t forget that.

Oddly, it turns out the President doesn’t know about the alien robots her government are working with, being confused as to why she and her crew are waking up in the middle of a tourist attraction. Though she’s oddly unbothered about this mysterious threat to national security, as long as she gets back in time to have some cold pizza.

Maybe there’s a reason America has gone a bit peculiar.

Starscream’s pettiness is the big highlight here, with lots of good bitchy lines (and some filthy ones from both him and Optimus) to carry things through. Dario Brizuela does some nice work with the action, but it’s hard not to feel “Decepticons grab the President” is a bigger story than can be done in 8 pages and it’s a shame the book is no longer in a place where it can do two parters. 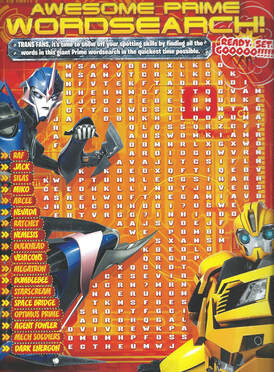 AWESOME
Appropriately, the profile this month is for Starscream, with lots of Aligned continuity details about him wanting to be a Prime and how he was originally Megatron’s boss.

The episode guide covers its first single episode, Masters and Students. Which at least gives the comic the chance to promote the Skyquake toy.

Speaking of toys, the Raf’s code based competition is for the newest wave of Prime figures, including the one guy everyone wanted but which seemed to be impossible to find in the UK without sacrificing a goat: Wheeljack.

Starscream’s Stumpers (divided by the double sided poster) asks you to spot the difference between two pictures of Megatron; to recognise Transformers from close ups of their bodies and to find Miko in a maze (“One day I will squish her to a pulp!”).

Mega-Mouth is all about the fan art this month. Especially impressive is 19 year old Rebecca Perez from Lincoln, who sent in two original characters with full profiles. Only one is presented here, Epsilon, a female Autobot recon hiding a deeper pain underneath her kindness. 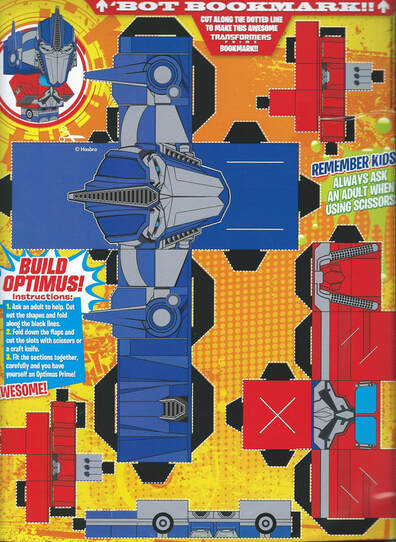 Your guess is as good as mine.
The issue closes out on three puzzles. Ratchet and the Vehicons has you searching for Decepticons in another of those CGI city maps and the Awesome Prime Wordsearch! has a variety of phrases hidden within it.

Road to the White House shows the President really is incredibly unlucky as Prime as to help her through her home whilst avoiding invading Vehicons.

Hilary will never realise she is better off out of it.

The cover is bigger for both a book mark and a cut out make your own Optimus Prime that, based on the accompanying finished picture... is... well... impossible to describe.

Maybe I’ll have managed to work it out by next week, as Megatron lays down the law. 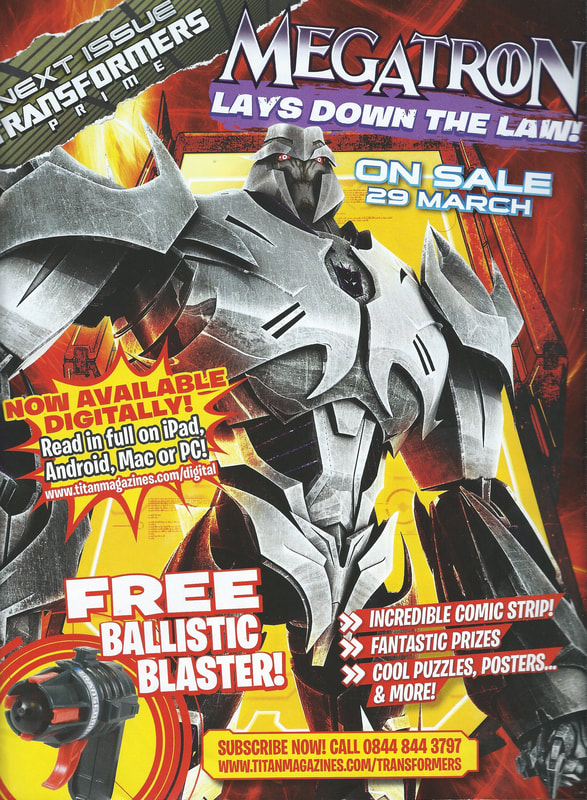