That's What I go to School For. 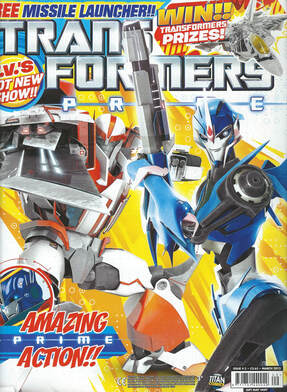 
TV’S HOT NEW SHOW!! screams the cover, as if the series had just reached the UK. Oddly as it had been broadcast since September, but perhaps it was resuming after a break. Or Titan realised there was some more cross-promotion. Which is something born out by the strip within.

School is... Out! starts in a way I would not have expected from a comic as recent as eight years ago. Greenville High School Nevada, after some comedy set up about its great record and being voted “School Most Likely to produce a future US President five years in a row”... explodes from bombs that have been planted within it.

Which, as reporters Sterling Spoon and Bliss Meadow (I wonder why Etherington didn’t just call them Irwin and Joy? Or was Irwin Spoon too ridiculous a name even for a homage?) explain, is the fourth school to have gone boom in a week. Though they think it’s down to a gas explosion as that was the warning that was called in.

Third party Irwin and Joy.
Attacks on American schools were already a way of life and widely reported in the UK, even back then. Certainly we all knew the difficulties that two episodes of season 3 of Buffy faced in the aftermath of one shooting (including cutting Xander celebrating when Sunnydale High explodes in a similar way to how Miko reacts to the potential idea later in this story), so it’s perhaps surprising to see a kids comic try and do something similar with a ludicrous comedy villain. And I absolutely do no think it was a “Gas warning” in Etherington’s original script.

The whole thing is sort of like having Dr. Arkeville being behind flying planes into building in New York in the aftermath of 9/11.

Perhaps being UK based meant the comparison didn’t occur to anyone at Titan, or it was thought to have enough distance to not make it an issue. But I think it would be considered to be too near the knuckle to fly today. Especially as the odds of you being able to put the comic out in a month where there wasn’t an American school shooting in he headlines aren’t great.

At Omega Point, Miko is, as mentioned, delighted at the thought her school might be next and doesn’t care if Raf doesn’t like her sense of humour.

Jack, as the dull sensible one, is taking things more seriously, not liking how schools are spontaneously exploding in the area the Autobots are based with their three school pals. Optimus agrees this is probably a Decepticon trap, so school is “Officially... out!” (Miko: Yaaaaah!”). 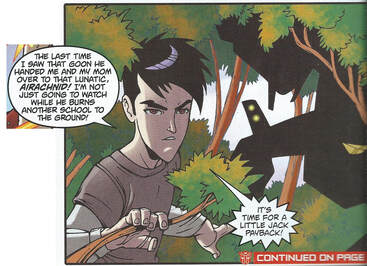 "It's time for Jack Back!" is what he should have said.
Oddly he doesn’t mean he’s going to phone up Agent Fowler and have all the local schools evacuated, but instead is going to send one Autobot and one human to each of the remaining local schools to watch them in the bushes. So I hope there were no more than four other schools.

Jack is bored hiding behind a tree at Franklin High, until it suddenly is evacuated and some familiar (to Arcee and Jack anyway, the ones in the show are green) Bumblebee coloured cars roll up revealing it wasn’t the Decepticons but... MECH!

The connection to the TV series doesn’t just extend to featuring its main non-Decepticon threat. Terrorist head of the group Silas is still pissed off at Jack and determined to flush him out with these school attacks. And Jack isn’t happy after their last meeting saw him and his mother nearly turned over to Airachnid.

A direct reference to the episode Crisscross, where Silas also... learns where Jack lives and wouldn’t need to attack schools (with dialogue from one of his mooks making it clear this is being escalated, hence the bombs not just going off with no one else present this time).

But it is trying.

As all the schools are being simultaneously attacked (with actual guns being fired around Prime, even closer to home), there’s no backup coming. And as Jack feels personally responsible, he sneaks into the school alone... and right into Silas who has been watching him on the CCTV. 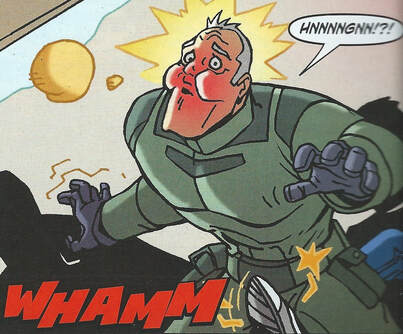 Well aint that a kick in the...
The human is pissed enough he then sets off the bombs with him and Jack in the building. Which somehow blows out the entire front of the school but doesn’t immediately effect where they are.

Giving Arcee time to rush in, rescue Jack and then join him in chasing Silas and the MECH men to the roof (where the fire sportingly doesn’t start to appear till they’re up there), at which point Jack deals with Silas by...

Kicking him in the balls.

Which, again, feels unexpected for a kids comic. And means you don’t really notice Arcee threatening to kill the mooks. And, as only Silas escapes by grabbing a ladder dangling from a MECH helicopter before the building explodes, she basically does.


She and Jack do manage to ride clear, with Arcee reassuring Jack that he wasn’t an idiot for trying to sort this out himself as she’s done sillier things to protect her friends. Like running into an exploding school.

That’s an odd-un really. School attacks feel a bit too real world for this fairly light comic to take on, and between Miko mocking Raf and Silas being kicked in the balls its definitely trying to be more serious in tone, dealing with Jack’s sense of responsibility for the horror.

Which is nice on paper, but it’s also the first issue where having seen the cartoon is an advantage you need to appreciate the Jack/Silas antagonism and I don’t think the drabness really suits Etherington’s natural instincts.

But, it is nice to see the comic still trying new things and to not play it safe at every turn, even at this late stage in its life. At the very least I’m glad it had a go, even if it doesn’t succeed. And Horacio Domingues does more strong work. 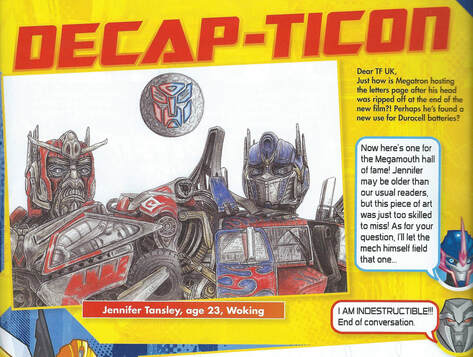 A better crack at Bay than most pro artists have managed.
Fittingly for the story, Arcee gets the profile (and a Photo-Mash-Up), which boasts about how she has “Fast become Prime’s right hand woman”. Which is less impressive when she’s the only woman.

Explosives are everywhere this issue, as Starscream invites you to Defuse the Bomb! (using Raf’s code and another CGI city map) and you have to help Arcee through the Save Jack! Maze to rescue him from a bomb in a school.

The episode guide reaches the end of Darkness Rising, which would be the sensible place to end the feature (what with the show being on TV to watch and all), but it will continue for a while yet.

The poster is back to a double spread, giving you a group shot of all the Autobots.

Starscream’s Stumpers wants you to untangle Jack’s USB wire; recognise the outlines of Transformers in the dark and decode Megatron and Starscream’s conversation (“Obey me!” “Bite me!”. Though I’m not actually sure why they’re writing it in Raf’s code.

A Walk on the Wicked Side sees Soundwave get the wordsearch, though his favourite phrases (“Agent Silas”) feel positively tame compared to what Miko and Bulkhead picked.

Mega-Mouth features some impressive fan art this month. Starting with 10 year old Mohamed Khattab (Sunderland) and his amazing creation, Weapon Magnet. And I don’t know why Hasbro keep trying to come up with new Transformers names when Weapon Magnet exists. 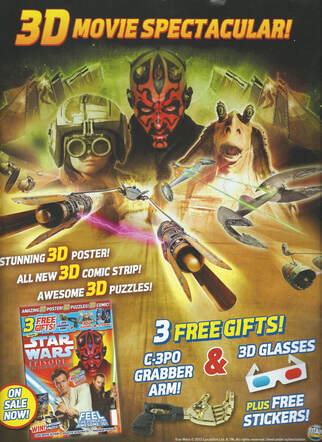 This happened.
At the other end of the scale, Jennifer Tansley (23, Woking) sends in a fantastic drawing of Movie Optimus and Sentinel. I wondered if she was still active in fandom, but my extensive research (looking at Twitter) didn’t bring anything up, but I hope they’re still drawing though.

She also asks how Megatron can be hosting the letters page after having his head ripped off in the new film. And rather than going “That wasn’t me”, Megs, again, forgets he’s not the Bay version and insists he’s indestructible.

What isn’t indestructible is his grumpy exterior, which melts with praise at the “Perfectly crafted mechanical marvel” that is a drawing of Megatron from Kane Woodhouse (12, Carnforth).

The amazing thing this issue though is the back page advert for a tie-in comic to the re-release of The Phantom Menace in 3-D. Even more than terrorists bombing schools, an advert prominently featuring Jar Jar Binks is the last thing I expected to see in 2012.

Next week, this perfectly crafted mechanical marvel will be talking about the Autobots on Air Force One. 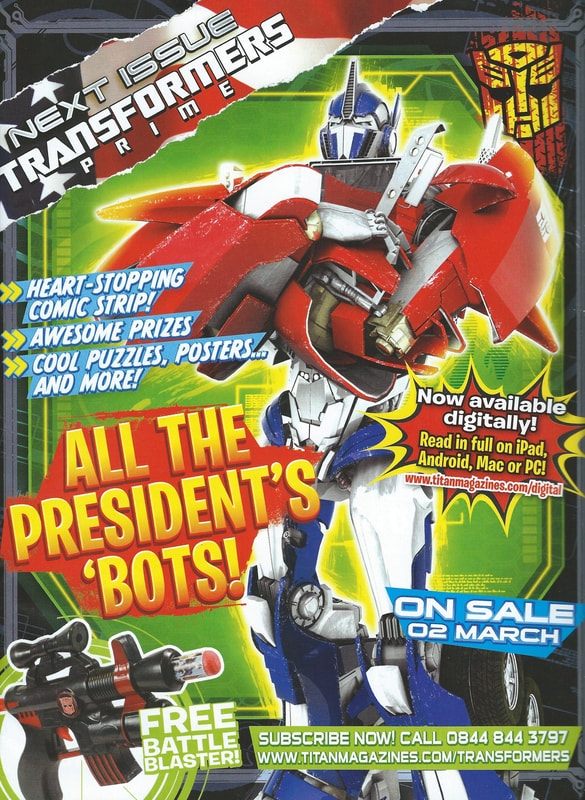